Freefall attractions are a staple of amusement park around the world today, but they had a humble start in the 1980’s in a whole different manner. Known today as “First Generation Freefall”, the original version did not look like a tower. Instead, it was a lattice L shaped steel structure with track coming down the inside of the L.

Designed by Intamin AG and manufactured by Giovanola AG, the ride was marketed and sold around the world by Intamin AG. Six Flags were the first customers and two opened in 1982 at Six Flags Over Texas (Arlington, TX) as the “Texas Cliffhanger” and at Six Flags Magic Mountain (Valencia, CA) as “Freefall”.

The attraction worked like this: riders would board stainless steel cars where they would sit 4 across and restrained by a padded shoulder restraint. Two such cars were loaded at once and they would then be moved backward out of the loading area. The first would immediately enter an elevator and be taken 130 feet in the air. It would then be pushed out of the elevator and after blowing a horn… be pushed over the edge and drop straight down at a 90 degrees angle, causing riders to experience a brief moment of weightlessness. 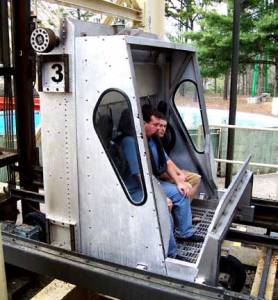 One of the ride car on the Freefall at Six Flags Over Georgia. Picture appears courtesy of http://www.negative-g.com

After going down the side of the L, riders are on their back and the car is slowed and stopped by pneumatic brakes. Those are similar to roller coaster pinch brakes and consist of two parallel jaws that grip a metal fin mounted on the back of where the passengers sit in the car. Once the car has been slowed down, it reaches the end of the braking area and when it is at the correct speed, it drops down a second track that put the car upright for offloading. It is then driven to the loading area. 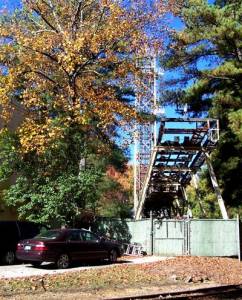 You can see the end of the drop track. This is again the Freefall. www.negative-g.com

The ride could run a maximum of 8 cars at once and could accommodate 1200 guests an hour. This was exactly what Six Flags was looking for and in 1983, they opened three more. Those went to Six Flags Great Adventure (Jackson, NJ) and Six Flags Over Georgia (Austell) as the Freefall. The third one was the Sky Screamer at Six Flags Astro World (Houston, TX). Marriott also got into the game and ordered two for their parks: The Edge at both Marriott’s Great America Santa Clara, CA and Gurnee, IL. 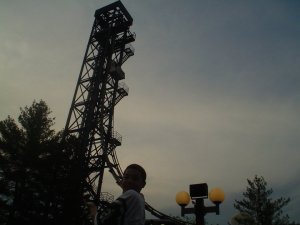 Stuntmen Freefall at Six Flags Great Adventure. This was taken in the early 1990’s after the ride was repainted and rethemed to fit the surrounding area. 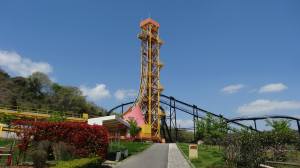 This is a still operating example at Himeji Central Park in Himeji, Japan. 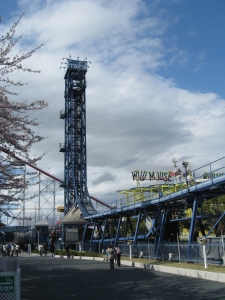 The ride was a moderate hit outside of the US and Japan with the only Canadian installation being the Drop of Fear at the West Edmonton Mall (Edmonton, AB). None appeared in Europe unfortunately. The canadian ride was one of the three signature attraction of the 1985 expansion of the Fantasyland amusement park inside the mall. Like the Perilous Pendulum (Intamin AG Looping Starship) and the Mindbender (Schwarzkopf custom looping coaster), the Drop of Fear required the roof of the park to be specially designed and built around those rides.

Those rides appeared at a lot of parks in North America and Japan in the 1980’s, but in the late 1980’s, they had already started disappearing from their original parks. Six Flags Great America The Edge was removed in 1986 and sold to another park after an incident in 1984 caused its popularity to plummet. In 1995, Paramount Great America in California removed their Freefall and replaced it with a new Intamin Giant Drop.  Sky Screamer at Six Flags Astro World shared for a single season “freefall” ride billings with the brand new Intamin Giant Drop, the Dungeon Drop. After 1997, it was dismantled. In 2005, Mr. Hyde’s Nasty Fall, the old “The Edge” from Six Flags Great America, was removed from Geauga Lake and used for spare parts for Cedar Point Demon Drop. In 2006, Six Flags Over Georgia and Six Flags Great Adventure removed theirs, 2007 saw Six Flags Magic Mountain removing theirs.

For smaller parks, those rides do have potential and with a focused maintenance team, their particular requirements can be met and the ride becomes a headliner. For example, Movieland Park in Lazize, Italy purchased the old Drop of Fear from the West Edmonton Mall. Given the fact that it had operated in a climate controlled environment for all its life, the ride was in exceptional condition and the park opened it in 2007 as “The Hollywood Action Tower”. It is still in operation and is still very popular. Beto Carrero World in Penha, Brazil bought The Edge from the Santa Clara Great America park and opened it as “Elevador” or Freefall. Demon Drop was removed from Cedar Point in 2009 and after initial plans to send it to Knott’s Berry Farm (Buena Park, CA) fell through, it was sent to Dorney Park (Allentown, PA). It reopened in 2010 under the same name and is an interesting compliment to the park S&S-Sansei tower attractions. 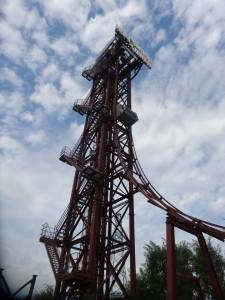 The Demon Drop in its new home at Dorney Park.

The Demon Drop in the distance. It replaced the park Dodgems Bumper Cars.

The Freefalls at Nagashima Spaland (Nagashima, Japan), Tokyo Summerland (Tokyo, Japan), Himeji Central Park (Himeji, Japan) and Rusutsu Resort (Resutsu, Japan) are the only ones still operating in their original parks.  15 in total were produced throughout the years and  7 are still in operation.

3 thoughts on “The world’s first Freefall attraction: part 1 of our Freefall serie”