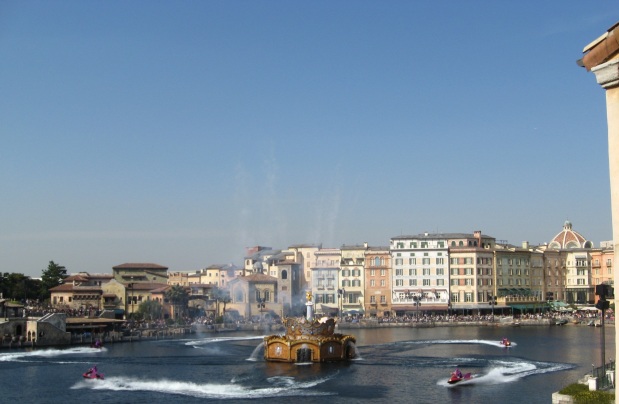 Tokyo Disney Resort currently offers three luxury hotels and a value option.  The Deluxe hotels are the Ambassador Hotel in Ikspiari, the Disneyland Hotel in front of the park and the Miracosta Hotel inside Tokyo DisneySea.  Prices for those are in the same order as I wrote them and each has their different style.  The links for the room types will take you to the official website for each hotel.

Ikspiari main entrance and courtyard.  You need walk through Ikspiari to reach the Ambassador Hotel.

The Ambassador has an art-deco style and is quite elegant.  Attached to Ikspiari, food options are plentiful, and the own hotel facilities are quite good.  This stylish hotel is where you will Tokyo’s Chef Mickey restaurant.  Disney character rooms themed to Mickey Mouse, Minnie Mouse, Donald Duck, Stitch and Chip’n Dale are offered exclusively at this hotel. They each have their original amenity pouches, and those character rooms have two single beds along with an extra bed that can pull out for a third person.

The Disneyland Hotel is fantasy oriented with a vast lobby as you’d see at the Animal Kingdom Lodge at Walt Disney World or Disney Grand Californian hotel in California.  For the character rooms, you have Tinkerbell, Alice in Wonderland, Beauty and the Beast as well as Cinderella’s.  This hotel is right in front of Tokyo Disneyland, and some rooms offer a view of the park. 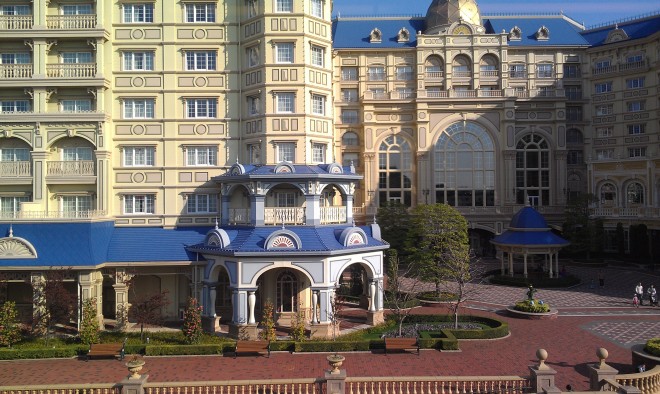 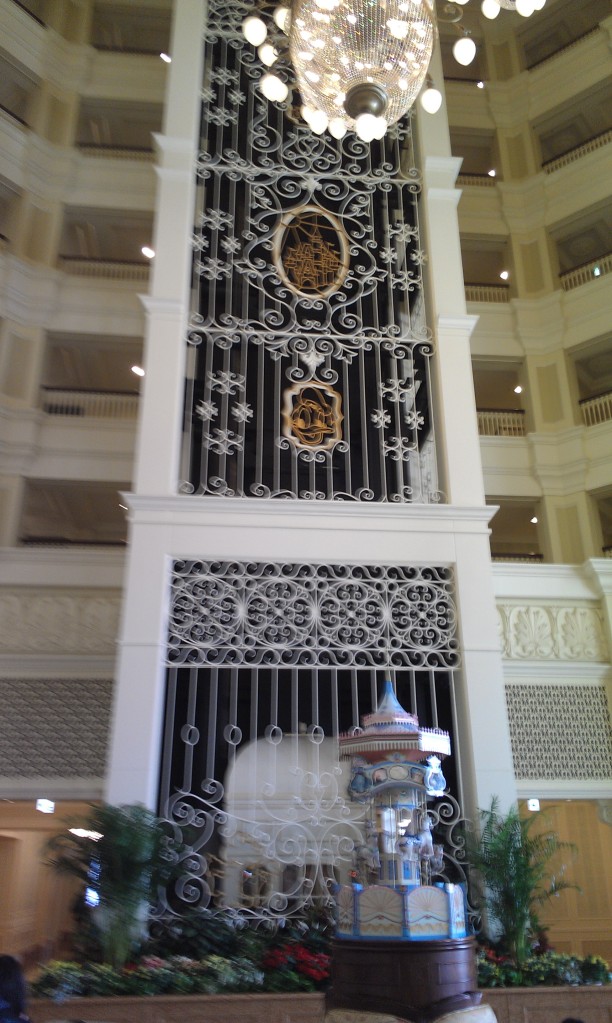 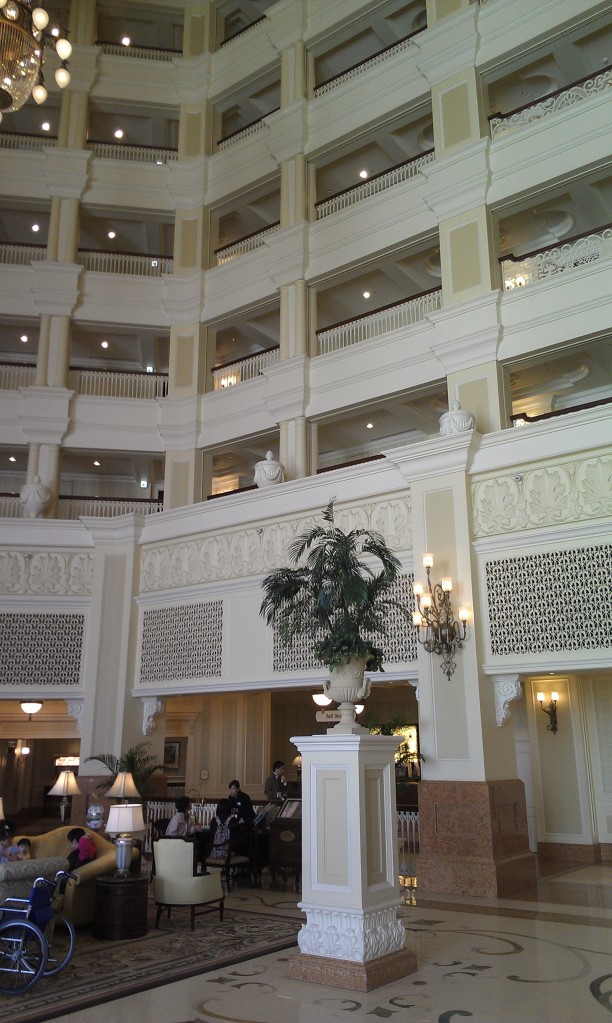 The lobby of the Toyko Disneyland Hotel.

The Hotel Miracosta has an Italian flair with many rooms looking inside the park toward Mt. Prometheus.  No character rooms are at this hotel, but the decoration and design of each room are breathtaking.  There is also direct access to the park as well.  Rooms that face Porto Paradiso or the American Waterfront are highly sought, and reservations need to be booked as soon as they open to the public five or six months in advance.

Hotel Miracosta.  The hotel exterior was done in an original italian style where tiles are laid on in a seemingly random and “rundown” way.  That style has rarely been seen outside of Italy and this is one thing that make the Hotel Miracosta so amazing to look at. 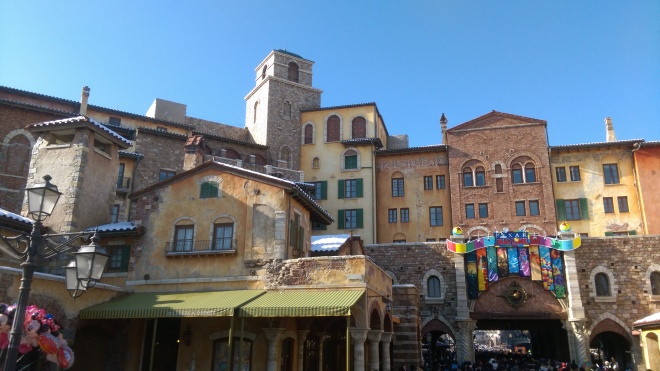 Hotel Miracosta from the entrance of Tokyo DisneySea. 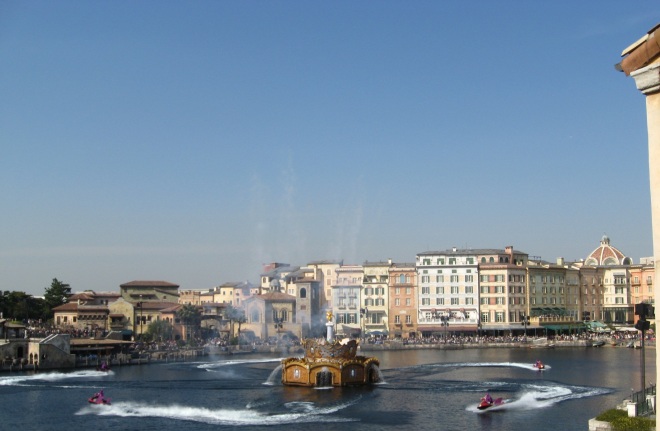 Looking at the hotel from across Mediterranean Harbor.

The incredible lobby of the Hotel Miracosta.

The Value Resort here is the Tokyo Disney Celebration Resort.  It was an existing pair of hotels 15 minutes away from the resort that was completely reimagined and transformed into a Disney experience.  Both hotels are known as Wish and Discover and they offer rooms that are much more affordable than the deluxe, and they can also more easily accommodate larger families and groups.  The Disney parks are what is featured here in the lobby and the rooms. 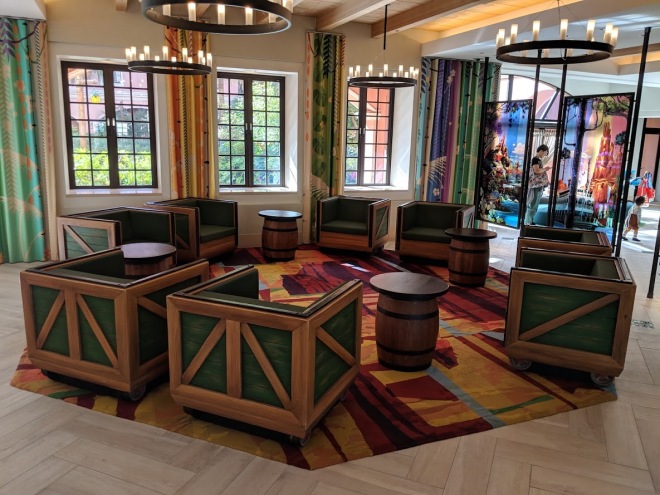 Tower of Terror glass poster in the lobby of the Disney Celebration Discover lobby. 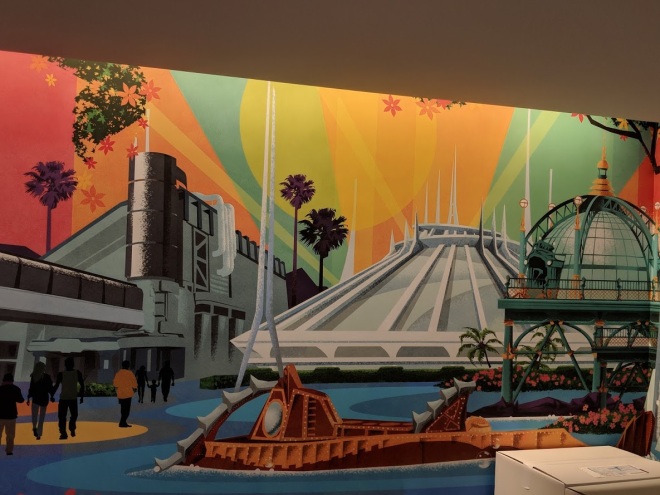 Beautiful murals like this one are present around the lobby of both Disney Celebration Hotels.  The theme at the Discover is adventure, so rides like Space Mountain, Journey to the Center of the Earth and Big Thunder Mountain are featured.  At the Wish, it is Fantasy with Fantasyland featured heavily. 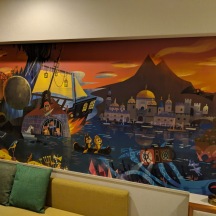 Mural inside the standard room of the Disney Celebration Discover Hotel.

Rooms are a bit smaller than what people are used to in North America, but they are flexible enough.  They can sleep three or four persons using portable beds and one note about this: regulation in Japan mandates that each person sleeping in a hotel need to have their passport scanned by the front desk and kept on record for the stay.  For that reason, not mentioning extra persons sleeping in a room is not recommended at all and will have consequences.

Extra Magic Hours as we are familiar with at Walt Disney World and Disneyland Paris are not held at Tokyo Disney.  They instead offer the Happy 15 entry into the park.  A turnstile at each park is reserved for those staying at each park and guests staying at a Disney hotel can enter the park 15 minutes early and visit a specific area and ride one or two attractions.  This has one significant advantage: prime position to access an attraction and score an early fast pass.  Guests to Tokyo Disney are very punctual and arrive on average 60-90 minutes before the park officially opens.  They will line-up in front of the gates, and being to walk in directly into the park 15 minutes before it opens is at least an extra hour of sleep every morning.

The huge crowds when the park will be busy at the main entrance turnstiles.  With the Happy 15 Entry, you will avoid most of this and be able to quickly enter the park.

At Tokyo Disneyland, Happy 15 Entry gives access to part of World Bazaar and Tomorrowland and Buzz Lightyear’s Astro Blasters is the open attraction.  Fast Pass distribution to Space Mountain, Buzz Lightyear and Monsters Inc. Ride and Go Seek! starts when the park open to the public. The particular turnstile to enter is in the middle of the entrance area.

Tokyo DisneySea has two separate Happy 15 Entry areas: the North Turnstile is for guests staying at the Hotel Miracosta since the Gateway inside the park only open at the park official opening time.  For guests staying at the three other hotels, head to the south entrance area on the left side of the Monorail Station.  Once inside the park, the left side of Mediterranean Harbor and the New York area of the American Waterfront will be open.  Tower of Terror and Toy Story Mania! are the attractions open during this time.

One exciting benefit of staying at a Deluxe Hotel is the option to use Package Pickup.  This is not offered to day guests and guests staying at the Celebration Hotel.

You can book one or two night packages six months in advances and room only reservations are possible five months before your stay.  At the Ambassador, Disneyland Hotel and Celebration Hotel, you can book stays up to five nights; at the Hotel Miracosta, two nights is the maximum.