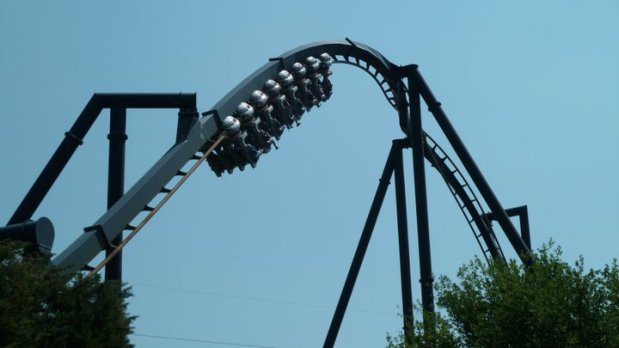 In 2000, the largest Inverted Coaster in Europe opened at Mirabilandia (Ravenna, Italy).  Called the Katun and themed after Mayan ancient myths, this was the premiere investment of the Loffelhardt (owner of Phantasialand in Germany) and Caselli (second of owner of ride manufacturer Preston & Barbieri).  The duo had purchased the floundering park in 1997 and set about putting in place a large investment program to bring guests to the facility.  The park had opened in 1992, but with only two water rides and an average wooden roller coaster as headlining attractions, the expected crowds did not show up.

Enter the new owners and between a 295 feet tall Ferris Wheel, an 82 feet tall Shoot the Chutes and a pair of S&S Towers, the park was finally pulling the expected attendance numbers.  For 2000, they ordered from B&M the second tallest Inverted Coaster they had ever built capable of speeds approaching Alpengeist.  The element order is the same as Raptor/Orochi, but with an L shape, similar to Pyrenees.  At 3937 feet long, this ride was on a scale rarely seen in Europe.

The ride area is themed to Mayan ruins and the name Katun describes a 20 year Mayan Calendar.  Once rider’s board one of the 3 32 passenger train, the ride starts with the small dip and turn that leads to the lift, like on Montu and Raptor.  We pass through a Star Gate and the train climbs the 164 feet tall lift hill. 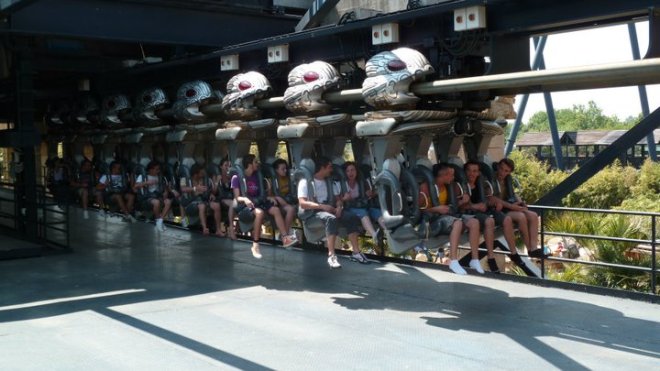 The beautiful train with elaborate wheel covers.  This picture appears courtesy of Flex.

The lift hill and the nearly straight drop.  This picture appears courtesy of Richard Bannister at http://www.themeparks.ie/.

Once at the top, the train dips down and turn to the left.  The train drops down the nearly straight 148 feet drop, reaching 65 mph and with a spectacular swooping entrance.  The train then goes around the large vertical loop and then a very tall Zero G Roll.  Things then get like Pyrenees with an intense low to the ground turn that take us to the right and directly into the Cobra Roll.  A trim brake is present at the bottom of the entrance of the element, but is thankfully never active.  The train exits the element into a rising spiral which leads to the mid-course brakes.

The train entering the first drop.  Thank you to Flex for the picture.

Sideview of the drop.  Thank you to Flex for the picture.

At 164 feet tall, it is taller than some Hyper Coaster and this picture show the scale of the ride very well.  Flex also took this picture.

The huge Vertical Loop.  For a size comparison, look at how small the Flat Spin is on the left.  This picture appears courtesy of Flex.

A very unique view from under the Vertical Loop.  Flex is the one who had this great idea. 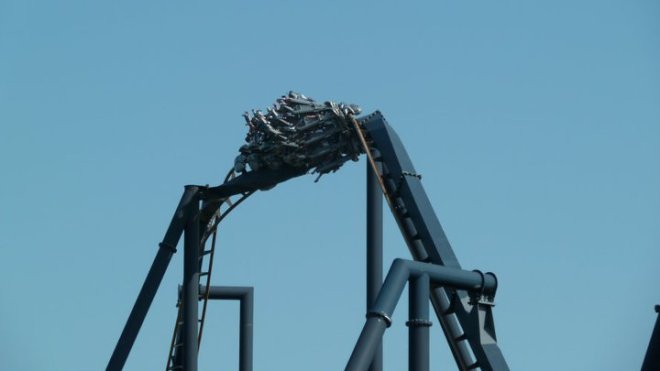 The tight Cobra Roll.  This picture appears courtesy of Richard Bannister at http://www.themeparks.ie/.

A sharp straight drop takes us out of the brakes and into a right hand Flat Spin.  The train then goes underground and rises out into a left hand Flat Spin. The ride then concludes with a rise into a 360° spiral that take us through the second star gate and into the final brakes. 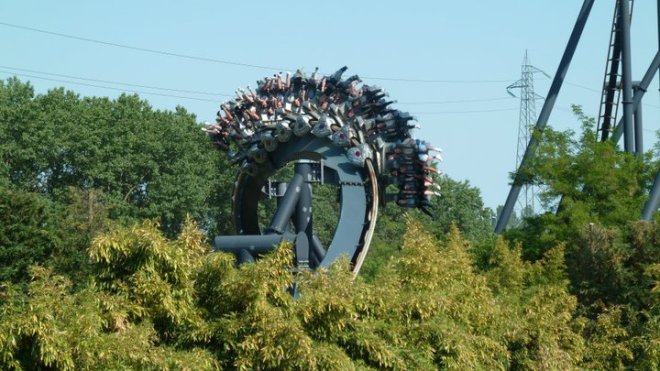 The second Flat Spin above the trees.  Flex.

The final spiral and the Star Gate that concludes the voyage.  This picture appears courtesy of Richard Bannister at http://www.themeparks.ie/.