CAVU Designwerks was launched earlier this year just in time for the 2015 Asian Attraction Expo in Hong Kong and was founded by Peter Schnabel. Peter Schnabel previously served in important roles in three major companies and the goal was to look at the industry with a fresh set of ideas. The CAVU name refers to Ceiling And Visibility Unlimited and those are perfect flying conditions.  Peter is a flying enthusiast and this is a great way to describe the mindset of his new company, which is to look at things in a new way and find simpler ways of doing it.  Six products are currently offered:  among those is a new approach to the next generation theater called the Free Flight and a multi motion dark ride with 5 Degrees of Freedom, the Storm Chaser. 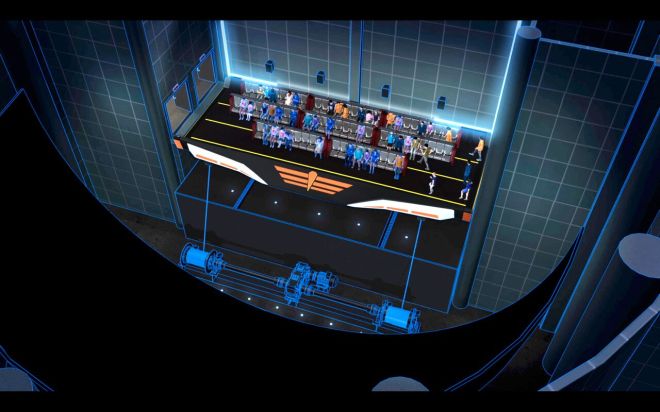 The Storm Chaser is the next generation high capacity multi motion dark ride. Each unit can accomodate 10 riders and this allows designers more flexibility in design the attraction since the space between each cars can be longer and still maintain high capacity. CAVU also allowed us to use this great picture. http://www.cavudw.com/

Alterface Projects from Belgium had on display in their stand a beautiful scale model of the brand new Plants vs. Zombies attraction coming in 2016 to Carowinds (Charlotte, NC).  What is interesting here is that it is going in the Motion Simulator theaters and will feature a brand new version of Alterface Projects popular interactive cinema.  In this case, the audience will be divided in two and playing against each other.  Now, to provide the best guest satisfaction at the end of the experience, the scenario has been carefully written so that everyone still feel like a winner and the attraction will feature the same humor as the popular game.  The outside of the theater will also receive appropriate theming elements. This is a very interesting project as Cedar Fair has 3 other such underutilized theaters in the chain.

This is a picture showing the redesigned theater that will be used for Plants vs. Zombies Garden Warfare: 3Z.  68 motion seats are being installed and the show should run 10 times per hour.

As you can see, the room will also be themed and guests will be able to look at the opposing team. 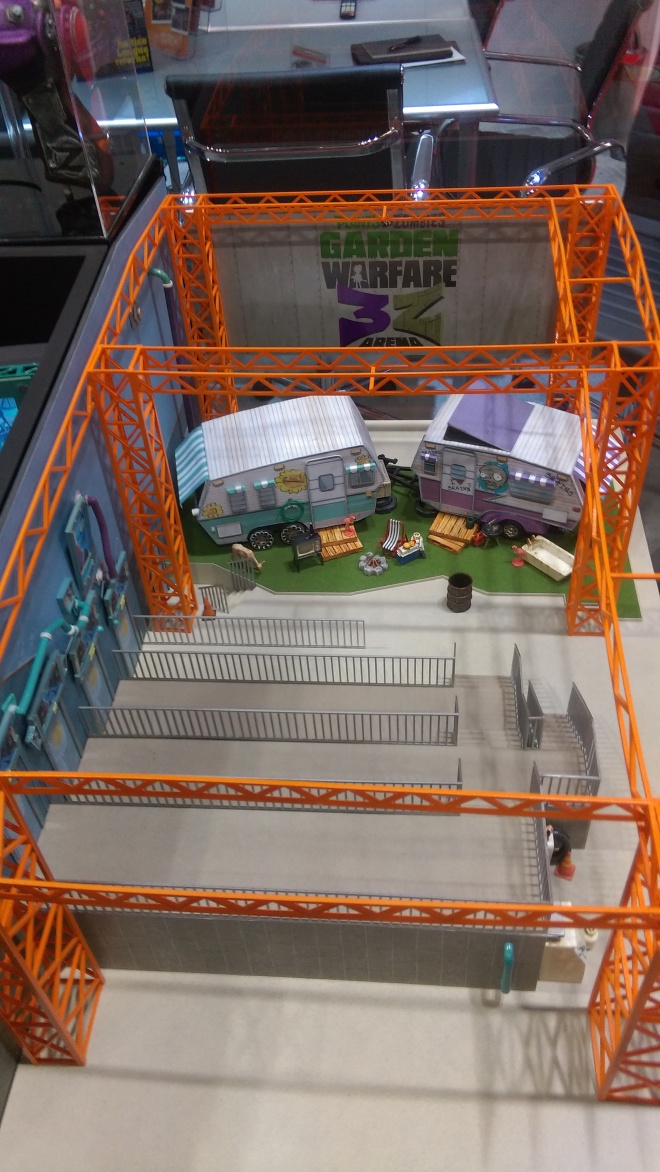 The exterior theming will stay in the spirit of the popular game.

This was a very successful year for Alterface Projects as they also worked on the award winning Justice League:  Battle for Metropolis dark ride at Six Flags.  Sally Corporation was the main designer and in addition to Alterface Projects, they hired an all-star crew to assist them on this project.  After their collaboration on that project and others, Alterface Projects and PURE Imagination Studios announced a partnership at IAAPA Attraction Expo.  This will allow them to leverage their respective strengths and offer high quality products to park.

Going back to the Justice League: Battle for Metropolis attractions, it won the coveted the Brass Ring Award for Best New Ride in 2015. The amazing integration of the Sally Corporation Audio-Animatronics, storytelling and set design combined with the ground breaking Oceaneering vehicles, Alterface Projects invisible targets, PURE Imagination Studios animation and many others proved to be a winner for Six Flags Over Texas (Arlington, TX) and Six Flags St-Louis (Eureka, MO).  The guest reaction has been fantastic and Six Flags is introducing two new installations in 2016 at Six Flags Great America (Gurnee, IL) and Six Flags Mexico (Mexico City).  While the first two went in repurposed buildings, both 2016 installations are getting brand new custom buildings and an optimised ride path that should improve the guest experience. 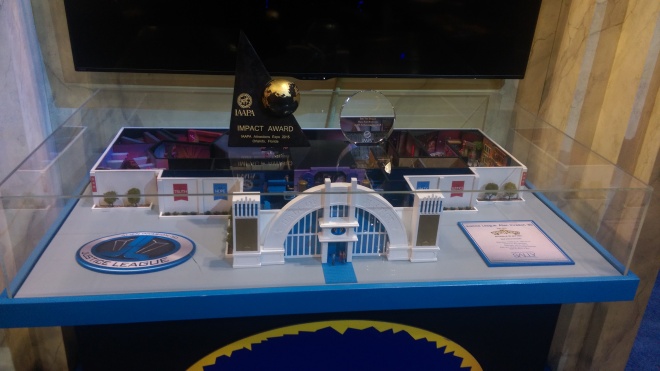 Sally Corporation also had on display a zombie animatronic to push a new The Walking Dead dark ride experience.  Various visuals have been shown and with the realism of the Zombie on display, the end result should be incredible. 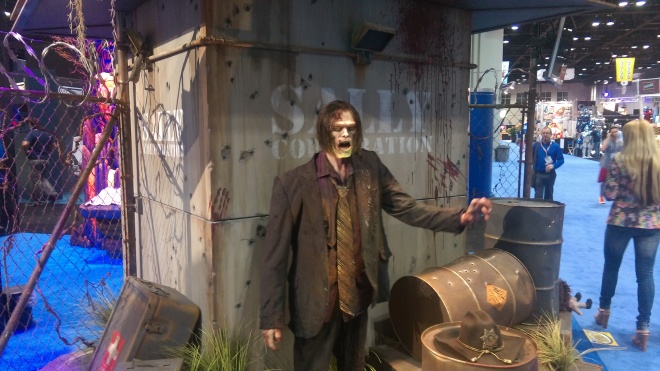 The Zombie on display.

WhiteWater West Industries LTD. held a press conference at their stand where members of the media were invited to relax and the 3 divisions of the company gave presentations.  Notably, the WaveOZ was presented along with a funny story of how the creator struggled for years on how to project water on an egg.  It became a running gag at Flowrider until someday, the egg worked and this leads to the WaveOZ, an expanded 180 degrees surf system.  It created the perfect wave and has room for either 4 individual boarders or provides a huge canvass for an experienced rider. 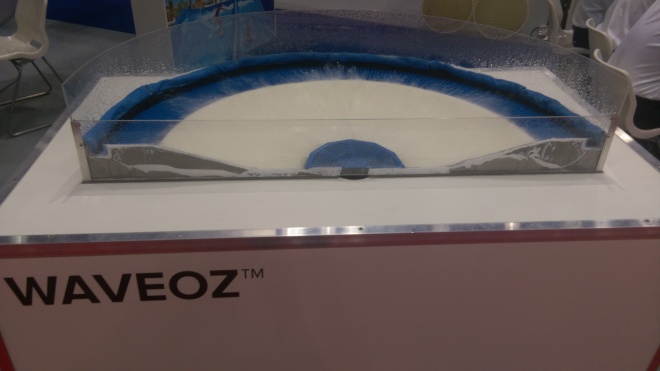 This is a model of the brand new WaveOZ. The first one debuted in early October at  Thermas dos Laranjais waterpark in Olimpia, Brazil.

This is a model of the Wave House concept, which feature at least one Flowrider unit in a stand alone venue.  To make it a place to go and have fun, a bar and restaurant is integrated and make it a destination.  Various Wave House and similar venues opened around the world and we will be doing a future article on a great example of a Flowrider creating a new sport in a city.

Rick Briggs, Director of creative design talked about the new APX playground, which is a new way to design the familiar Aquafortress.  The main innovation is that new material combined with new designs gives 360 degrees visibility on the deck, which is important for parents looking at their children playing on the structure.  One great example opened last summer at Aquatopia, the new indoor waterpark at Camelback in the Poconos Mountain.  Also opening at Aquatopia was the Venus Slydetrap slide, a brand new funnel attraction.

Rick Briggs talking about the APX Playground at Aquatopia. 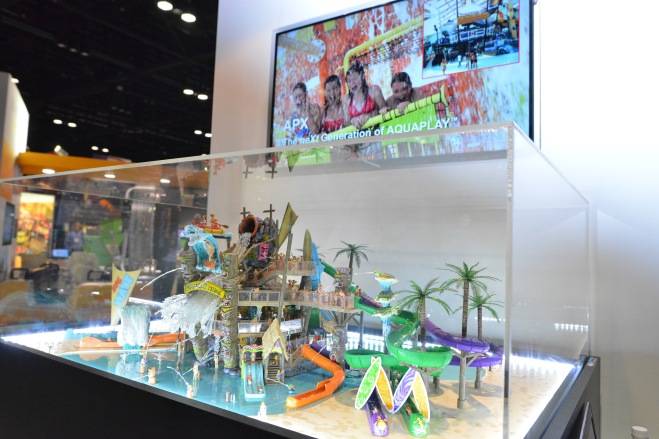 WhiteWater provided this great picture of the APX scale model on their booth. http://www.whitewaterwest.com/

This is the Kartrite’s Quest at Aquatopia. In addition to giving great sightlines for parents looking at their kids, it also requires less lifeguards to staff than earlier attractions of that type.  This picture appears courtesy of http://www.whitewaterwest.com/

The high capacity bucket is combined with a redesigned roof for maximum splashing.  This picture appears courtesy of http://www.whitewaterwest.com/

84 water features and many slides are featured on Kartrite’s Quest.  This picture appears courtesy of http://www.whitewaterwest.com/

This is a model of a Constrictor-Manta Fusion water slide.

WhiteWater provided us with this great close-up of the Manta feature on the Venus Slydetrap. The ragged teeths were integrated into the fiberglass of the slide and look incredible, strongly pushing the theme. http://www.whitewaterwest.com/

WhiteWater Attractions discussed their No Boundaries play system and had a water transportation systems boat for a coming attraction at the Miami Zoo on display.  The main stand had a classic American “vacation car” named Olive on display and was the prize of a silent auction benefitting Give Kids The World Village.  The car had previously been used by the company for their “I Heart Waterparks” campaign. The car was sold for $7,500.00 to the Omaha Children’s Museum and all funds went to Give Kids The World.

WhiteWater provided this picture of Olive, the 1976 Dodge Aspen Station Wagon. The mascot is Murphy from Give Kids the World.

Last, in addition to Plants Vs. Zombies Garden Warfare: 3Z, Carowinds (Charlotte, NC) is transforming their water park into the Carolina Harbor. As part of that expansion, the park will introduce Blackbeard’s Revenge, a brand new WhiteWest multi-slide complex similar to Snake Pit at Dorney Park (Allentown, PA). 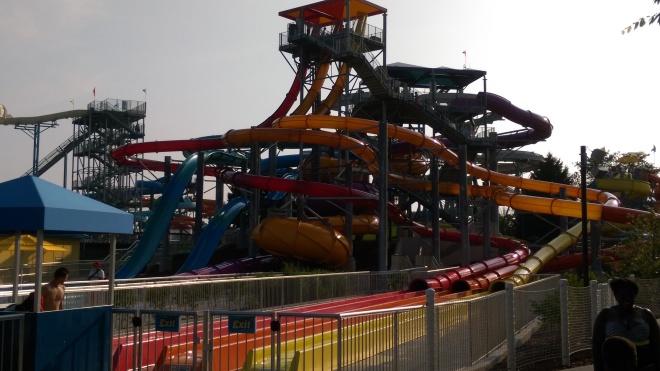 The complex consists of three Flatline Loop body slide with Aqualaunch, two Inner-Tube slides and a Constrictor which you can see in the middle.

Congratulations to #tokyodisneysea for winning the 2022 #applauseawards from @lisebergab !
Listening to @abigail_posner keynote address at #iaapa .
Late night visit to Busch Gardens to wrestle with a crocodile!
Time to break the ice at SeaWorld Orlando ! Premier Rides
Goodbye Splash Mountain, you had a great run!
I got I ran from A flock of Seagulls as the song!
Loading Comments...
%d bloggers like this: