When Euro Disneyland (now known as Disneyland Paris) opened on April 12th 1992, the park featured a single roller coaster:  Big Thunder Mountain in Frontierland.  Conceived as the ultimate version of the classic Disney attraction with an island setting and two tunnels under the Rivers of America, it was immediately the park’s most popular attraction.  But, even with 5 trains carrying 2100 guests an hour, the ride suffered from unacceptable wait times and the park started looking at ways to relieve that pressure.

Big Thunder Mountain on its island.

Two new roller coasters were on the drawing boards for the park: Discovery Mountain in Discoveryland and an Indiana Jones mine car roller coaster on a large expansion pad reserved for it in the back of Adventureland.  A tight timeline and the resort financial concerns meant that choices had to be made for future expansion:  Discovery Mountain in a smaller scale was selected and Imagineer Tim Delaney made it fit the available space and budget in Discoveryland.  So the park had a new headlining attraction in the pipeline, but even with a fast construction pace, the ride would only open in 1995 and cost the park the equivalent of over 80 million dollars US.

Space Mountain at Disneyland Paris with the Orbitron in front of it.

What to do then to increase capacity in the park and add that other thrill ride guests are asking for?  Tony Baxter, like Tim Delaney for what became Space Mountain: De la Terre a la Lune, looked over the current plans and worked with Intamin AG to design a simpler and much quicker to construct roller coaster that would recycle the Mine Car roller coaster from the large scale Indiana Jones complex.  Land was quickly cleared and Walt Disney Imagineering got from Intamin AG exactly what they wanted: a compact looping roller coaster with reasonable capacity.

Intamin AG looked at what was on the market and noticed a small roller coaster manufacturer from Italy called Pinfari had produced a roller coaster called the “TL-59”.  The ride basic layout had small sharp drops, an interesting straight segment of track halfway through followed by the ride single vertical loop and then a helix and small dips concluded the ride.  Being a 1982 design meant to be transportable, comfort and esthetics were not to Disney standard and going with the direct Pinfari design not an option.  Intamin AG asked the Engineering office of Werner Stengel to take that layout and make it suitable for Disney comfort, capacity and appearance wise.  Capacity was increased to 5 trains of 8 passengers (4 riders per car in two rows) and then, Intamin AG asked their subcontractor Giovanola to build the ride using a Schwarzkopf like solid spine loop and double tube track for the rest of the ride.  Giovanola was also able to fabricate in the track brackets for decorative railroad crossties to accentuate the Mine Car feeling of the roller coaster.

The major departures layout wise from the TL-59 to the Intamin ride are as follow:  the station can load two trains at once and the long curve from the station to the lift hill changed to a 90 degrees curve, block area using pusher tires to hold trains and then another 90 degrees curve into the lift.  At the top of the 59 feet hill, the lift chain extends down and this gets the trains off the lift hill faster.  The next two drops are similar and then, the weird uphill, brake and then downward slope into a curved tight drop was changed to a longer straight track with a block brake at the end.  More pusher tires were installed to make sure the train is going at the correct speed and then the drop was redesigned to be smoother and more “natural” heading into the loop.  The train reached 36 miles per hour at that point and the loop is a very intense experience.  This is followed by a quick rise into a 540 degrees helix that spice things up with a small drop halfway through, increasing speed and making it a varied element.  A quick rise with a small airtime moment leads into the last block brake where the train is slowed down for the next sharp curve.  One last hill and the ride final turn end the attraction.  The end of the ride can accommodate 5 trains and this was perfect. 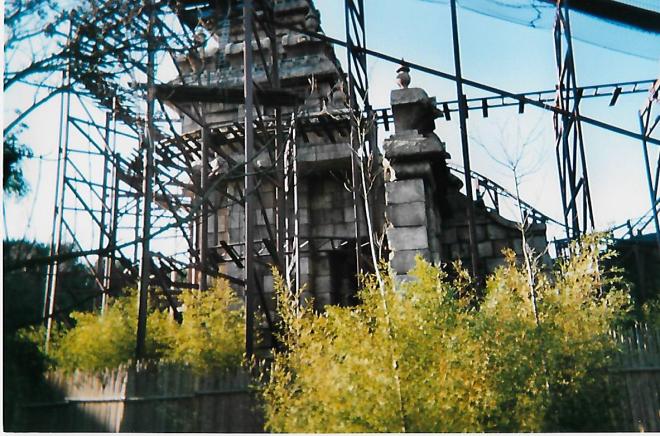 In this scanned picture from 2001, you can see the beginning of the straight track and under, the first portion of the helix.  Notice as well the wooden crossties mounted under the track.

In this scanned picture from 2001,  the end of the straight away is behind the lift hill and the ride high turn after the first drop is over it.  You can also see the original loop in the middle.

This is the view from the plaza at the entrance of the ride.  The train is currently on the high post first drop and the track is the beginning of the curved drop that lead to the loop.

A train dropping into the loop.

Disney was happy with the redesigned ride and construction started at the park with a large cement slab poured for the ride.  Due to the tight construction schedule, they were able to get away with an attraction that is simply bolted to the cement slab and does not require footers that would take weeks to cure.  Walt Disney Imagineering then designed an Indian style Hindu temple around the roller coaster and the ride waiting line placed in front of the longer side of the ride in a jungle setting.

Construction was a very quick process since the ride was designed to be temporary and had an expected lifespan of 5 years, which was the time the resort forecasted to turn their fortune around and to get the original Indiana Jones complex constructed.  To that end, the Temple and all “stone” elements is simply a thin layer of concrete projected on foam forms.  No moving ride elements were designed in the ride and the lone special effects are 4 flaming flasks placed in front of the ride for two and two at the top of the waiting line stairs.  To hide the cement slab, many truckloads of gravel were laid at the bottom of the ride.

One of the ride many element of decor.  When the ride was sponsored by Esso (Exxon-Mobil brand in Canada and France), various gas jerricans with the Esso logo were hidden along the Temple and scaffolding.

It worked and on July 30th 1993, Indiana Jones et le Temple du Peril (Indiana Jones and the Temple of Peril) opened to guests and was very successful and very popular.  It was effectively the first looping attraction at a Disney park in the world.

Here is how the original experience went for guests:  after entering the ride queue, guests line up in tents to protect them from the elements and walk past various vehicles such as jeeps, a large 6 wheel truck and tents filled with priceless artifacts… but it is deserted.   Where is everyone?  We are in a lush jungle and the last tent’s we cross make reference to the ride namesake with the trademark jacket and pants hanging from a clothesline and the Fedora Hat on the bed. 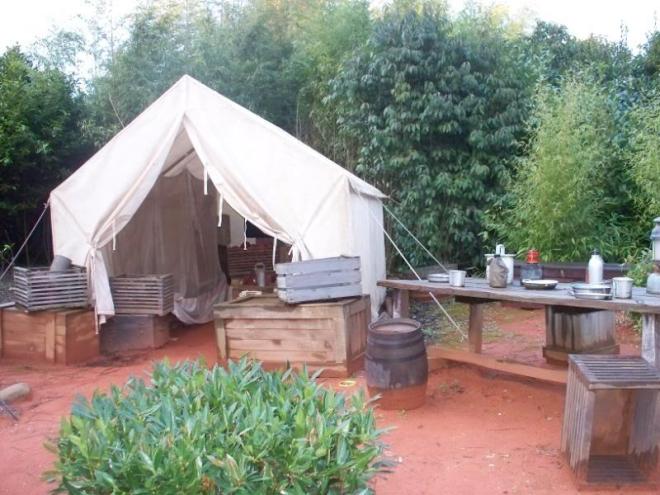 One of the tent visible from the waiting line. 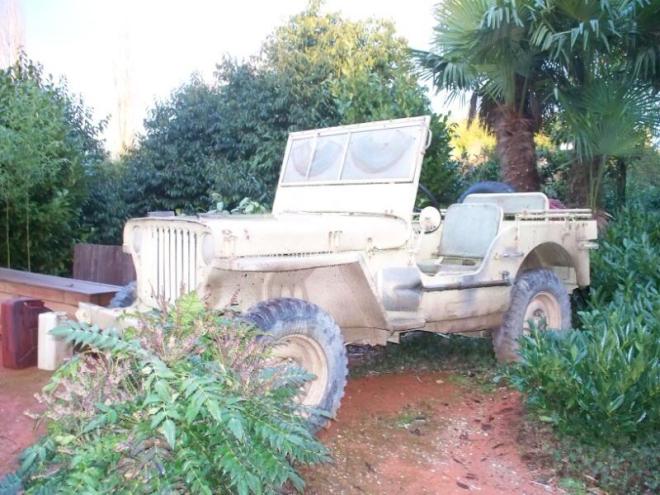 A jeep along the ride exit path.

Once guests reach the ride, they climb up large stone steps that were fitted with wooden ones to make it practical and two large Cobra statues guard the temple.  At night, there were two large flasks that ignited natural gas to create an incredible light effect on the temple behind.  Through the wall and in a stone arch, we see trains going through the loop and it is quite a visual sight.  We then walk down to the station and two trains are loaded at once.  Each train featured two cars with two rows of two and guests are restrained with a large shoulder bar that is designed to rest on the passenger lap.  A pretty decorative element was a lamp mounted in front of the first car and this made the cars look quite authentic.

In this exclusive scanned picture, you can see one of the ride original train.  Notice how padded the seat was.

The seats featured a lot of padding and was quite comfortable.  This photo was scanned.

One interesting element invisible to the guest is the fact that the ride was the only one at Disneyland Paris to run the manufacturer stock control system.  Usually, manufacturers will deliver and install a ride and then Walt Disney Imagineering will put in their proprietary Ride Computer System that works with the Show Control System.  This is coupled to a standard across Disney set of panels and computer screens that show in real time what the ride is doing.  Anything from a station stop to a brake fault is written clearly for the cast members to be informed.  Temple Du Peril was unique in that it still had the complicated Intamin control system and used codes to inform maintenance and operators what was happening with the ride.  Say the ride suffered an emergency stop:  on a small LED screen on the main ride panel, a number would appear and then cast members had to look through a reference manual to figure out what happened and what needed to be done to get the ride up and running.

The train were also a first for Intamin in their design.  The ride brakes moved away from the center of track where Vekoma, Arrow and Intamin had placed them before and were mounted on the side of the track.  A perforated metal fin hang them on each side of the cars and they are squeezed by the pneumatic brakes when the train need to be slowed or stopped.  During normal operation, the train is only slowed after the helix and at the end of the ride.  To move and stop trains in the station, pre station and pre lift zones, large tires are mounted on motors and those make contact with a rough plate mounted under each car.  This provides a lot more control over the train in those zones, but pneumatic brakes are still required at the end and on the ride 3 block brakes since the tires cannot stop a high speed train. 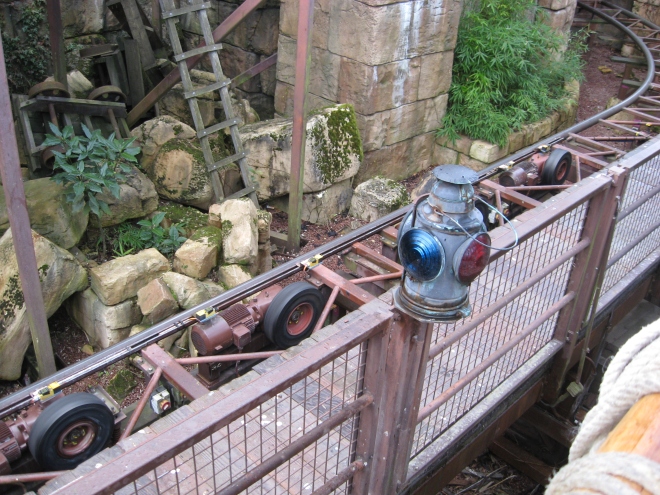 The pusher tires in the pre lift holding point.  How the ride works is that when more than 3 trains are running, two trains are loaded at once and leave the station at the same time.  The first train will directly proceed to the loading station and the other will wait here until the other has passed the first block brake and then it will proceed forward.

One interesting problem about the ride is that for wear and tear purposes, pusher tires were not installed in the final brake zone, which is not an issue in normal operation since the train is simply slowed and it proceed at a good pace toward the pusher tires after.  Now what if 5 trains are in operation and 4 trains are already at the end?  The fifth one will be completely stopped and then only gravity will slowly take it forward once the brakes are released.  At first, this was not an issue, but it became one later as we will see.