In 1995, two Inverted coasters opened and both are a different take on the Batman layout.

Over in Japan, Odakyu Gotemba Family Land opened Gambit, a B&M Inverted Coaster on the west side of the park.  What made this park unique was that it was divided in two by a large river and a long bridge linked the east and west sides.  Gambit and Dangai (a Togo Stand-Up roller coaster) were on the west side and the park 3 other roller coasters located on the east side.

Gambit was a mirrored version of the familiar Batman: The Ride layout and the first one to run 7 car trains.  A “Mirrored” layout here means that the ride turns and inversions are all reversed compared to the original one.  One reason for this is to better fit the park and this allowed the station to be placed in an accessible area for guests and to also fit the wider second half of the course.  So, here at Gambit, the first drop turns to the right and the Zero G Roll rolls to the left.  The ride here was painted with black spine and crossties, unpainted rails and grey supports.

We discovered this long lost picture of Gambit on an internet web archive.  No site can unfortunately be credited.

In 2002, half the park had already closed and the east side was replaced by an outlet mall.  That year, the side where Gambit had been renamed “Thrill Valley” and it finally closed to the public.  An expansion of the mall replaced it and the Ferris Wheel located on a hill on the east side is the only ride that survived the transition to the mall. A new sign advertising the Gotemba Premium Outlets was installed in the middle as a large billboard.

Six Flags came in and bought 5 attractions that could be moved easily back to the United States. One was a Zierer Wave Swinger which went to Six Flags Over Georgia in 2004 as the “Gotham City Crime Wave” and the four others opened at Six Flags New Orleans in 2003. The four rides were: Gambit, a Zamperla Windshear, a Mondial Shake and a Schwarzkopf Polyp with custom cars.  At Six Flags New Orleans, they were used to create a new area called the DC Comics Superheroes Adventure and the rides repainted and rethemed to fit.  The Mondial Shake became the Catwoman’s Whip, the Polyp the Joker’s Jukebox and the Windshear Lex Luthor’s Invertatron.  Gambit was repainted to its original colors with the addition of burned orange running rails.  But, as a major departure from the other Batman: The Ride, Six Flags constructed their standard “Art-Deco” station and like at Six Flags New England, the ride name was mounted on the side facing the midway and Batman logos on the side.  The theming consisted of the Batmobile upfront and various signs along the queue talking about the Batman characters.   Gambit required some work to adapt the ride from 100 volt electrical current used in Japan to the 110-120V voltage seen in North America. 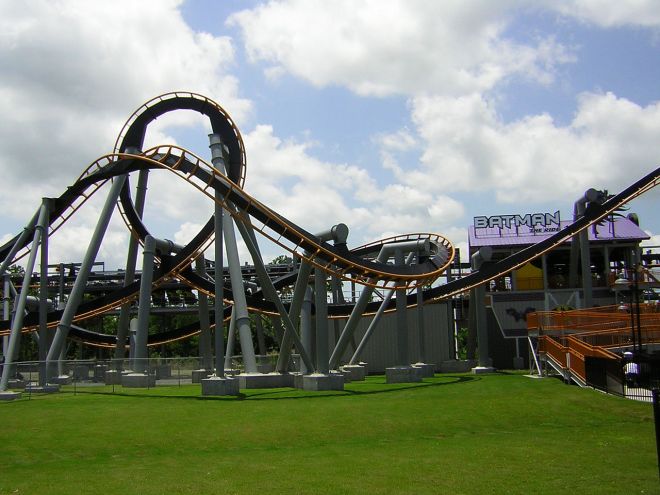 We found on wikipedia this picture from Chris Hagerman of Batman: The Ride at Six Flags New Orleans.

After Hurricane Katrina in 2005, the park was abandoned due to sitting in salt water for weeks and that damaged many rides beyond repair.  Six Flags managed to remove 3 rides and one of those was Gambit/ Batman: The Ride.  The other two were a pair of S&S Drop Towers that went to the Great Escape (Queensbury, NY) and a Vekoma Roller Skater Junior Coaster that went to Six Flags Magic Mountain.  What helped both rides is that a lot of the course of the roller coaster sat above the water and in all cases, the damage could be fixed.  All ride controls had to be redone since the ride computers and boxes sat under water.

Gambit finally ended its travelling career in 2008 as Goliath at Six Flags Fiesta Texas (San Antonio, TX).  The ride went on a section of the parking lot near the main entrance and it was painted in bright colors to make it fit the surrounding area.

Flex provided this shot of Goliath leaving the lift hill.

Flex provided this unique shot of the ride taken under the first Vertical Loop. 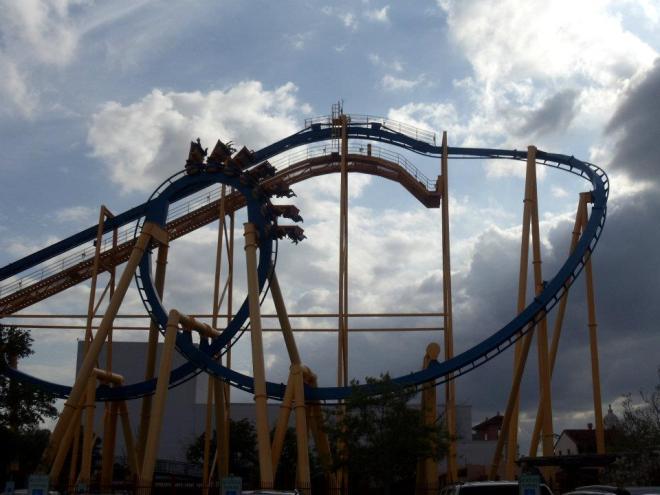 David Stepanek took this picture of the train in the first Vertical Loop.

Richard Bannister provided us with this great shot of the Goliath entrance.  http://www.themeparks.ie 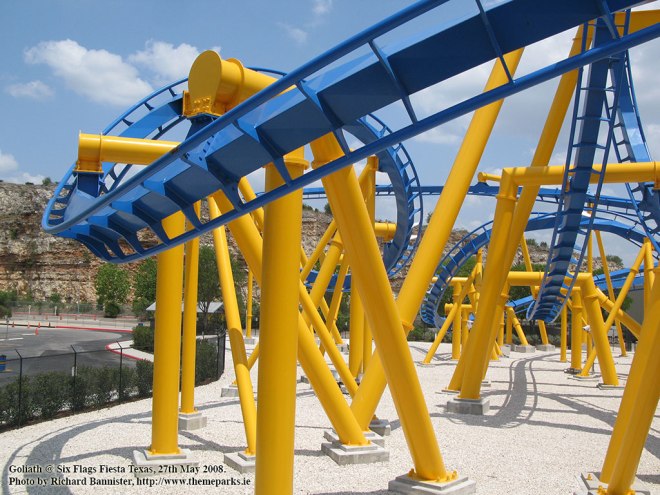 The bright blue and yellow colors really make the ride stand out.  This picture is by Richard Bannister.  http://www.themeparks.ie/