A second Batman: The Ride opened in 1997, this time at Six Flags Over Georgia (Austell, GA).  It used the familiar Batman: The Ride name and black colors, but Warner Brothers went in another direction for the theme.  The ride here replaced the Flying Dutchman (Intamin Buccaneer swinging ship) and the Highland Swing (Chance Yo-Yo) and the surrounding area went from Jolly Roger’s Island to Gotham City.  The Mindbender, a legendary Schwarzkopf looping coaster was repainted green and themed to a mind control machine created by the Riddler.  Gotham City here was a city overtaken by an evil circus and this really revitalized an area that was always light in theme. 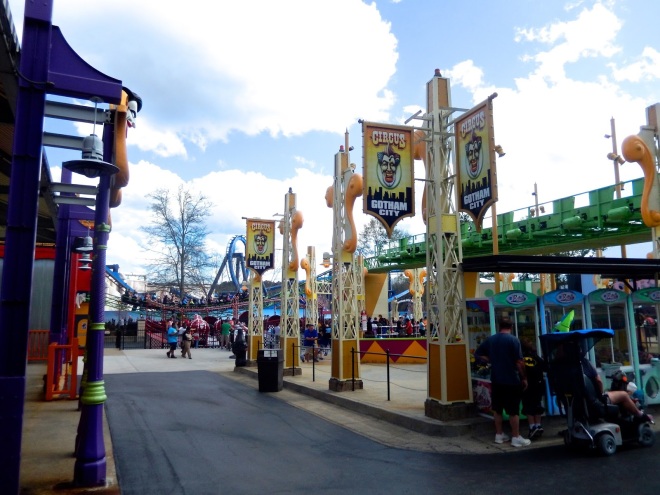 Thrillography provided us with this shot of Gotham City.  The green track on the right is the Mindbender final section of tracks.  http://thrillography.blogspot.ca/ 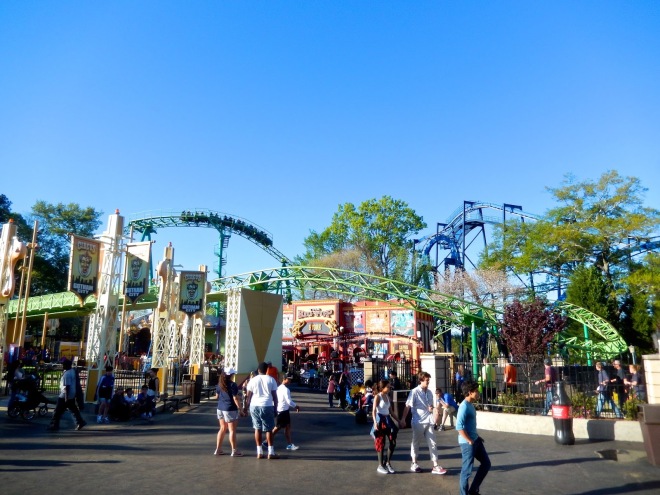 Another view of Gotham City from http://thrillography.blogspot.ca/

The original entrance to Gotham City.  The tunnel was necessary as the path goes under the railroad tracks.

Batman: The Ride on the left and the Mindbender on the right. 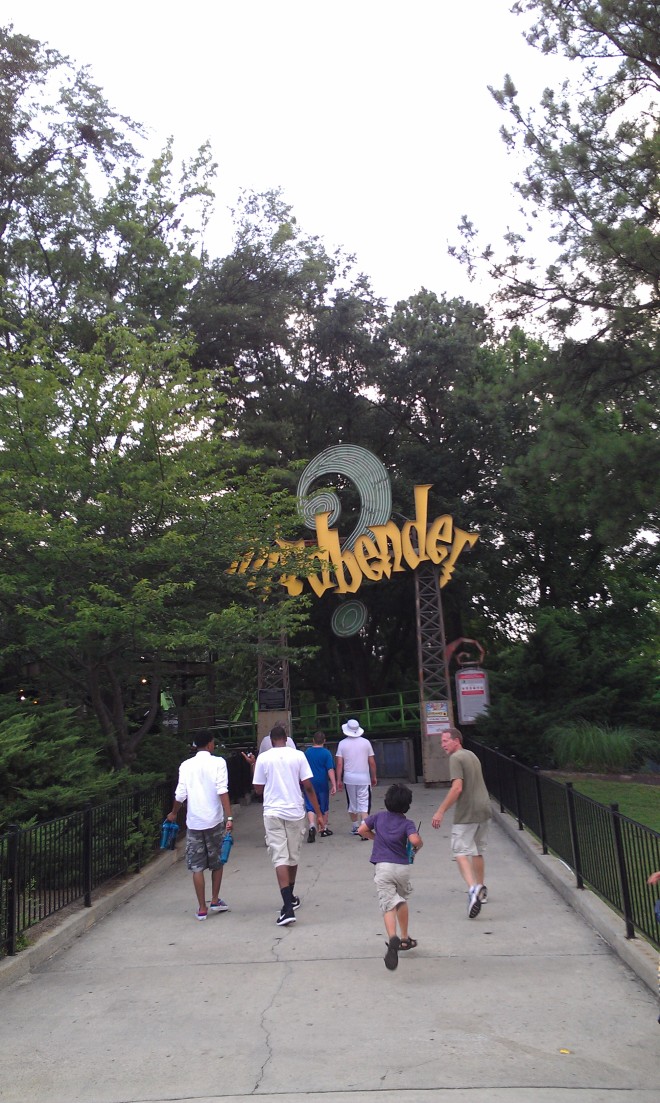 Batman: The Ride queue line starts with the familiar Gotham City Park, but after going through a tunnel, the main queue is a large chemical warehouse, under the station.  Once out of the warehouse, we then go through the Skid Row section and into the sewers, which leads us to the Batcave.  The ride itself is the standard layout with the terrain graded in the second half to avoid digging trenches.  The ride was repainted bright blue for the track and dark blue for the supports in 2010.

A plaque at the entrance of the ride.

A fountain in the Gotham City Park.

The storm drain that leads to the Warehouse. 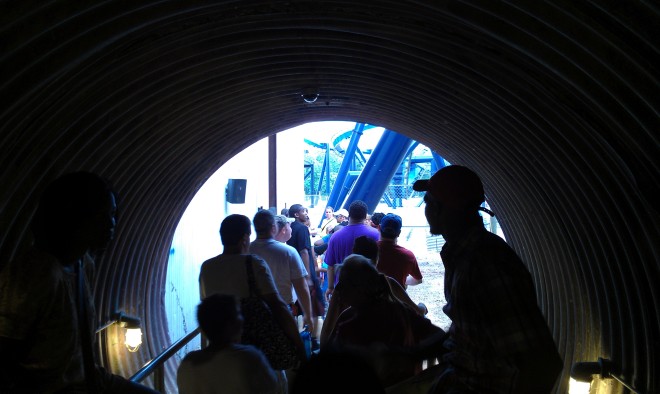 The waiting line before the Warehouse. 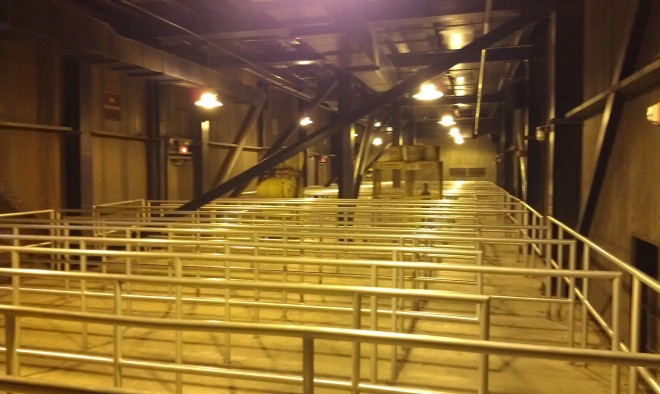 The empty Chemical Warehouse.  This was shot at night during a special event. 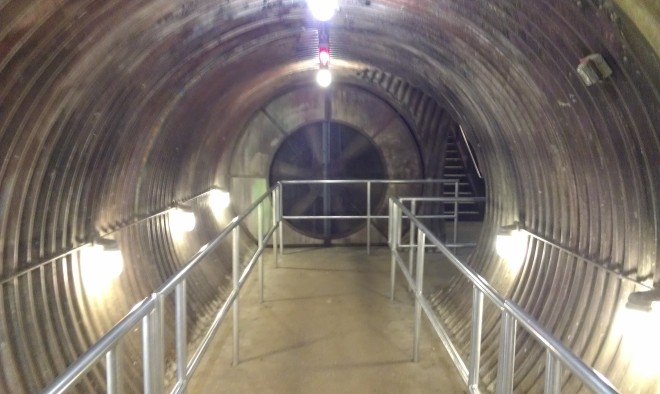 The sewer entrance to the Batcave.

The Batman logo in the station.

Even the emergency exit in the Bat Cave is themed! 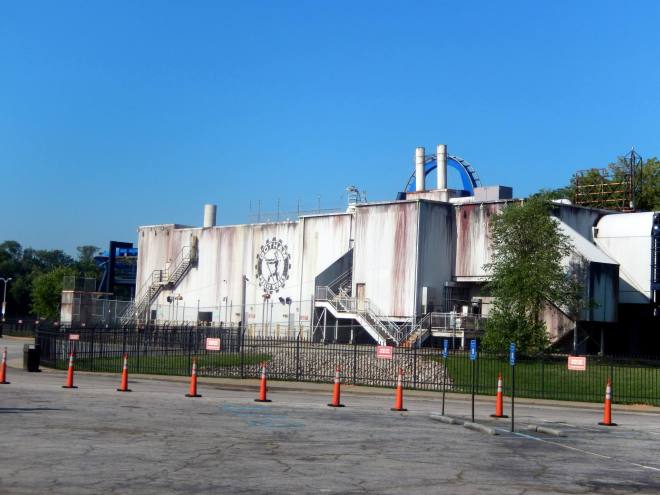 David Stepanek provided us with this back view of the Gotham Public Works building.  This serves as the station and warehouse queue for the ride.

The ride train.  On this installation, the seat hangers are grey, the seats purple and the shoulder restraints black.  The part with the the numbers is a metal post that is present to make guests can’t reach the restraint release system.

A view of the first loop.

The Zero G Roll.  This picture appears courtesy of http://thrillography.blogspot.ca/ 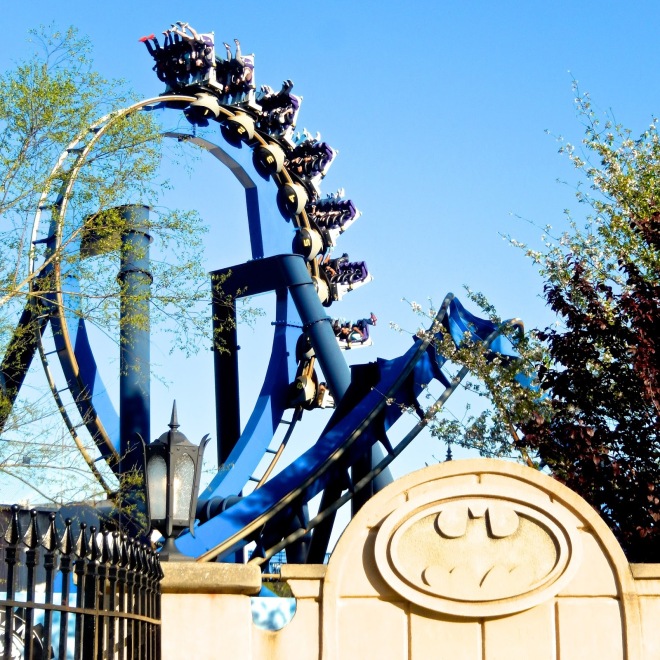 The second loop.  This picture appears courtesy of http://thrillography.blogspot.ca/

In 2004, the park finally replaced its swing ride with the Gotham City Crime Wave, the Zierer Wave Swinger that was purchased at the same time as Gambit.  It went to a new location to the left of Mindbender. 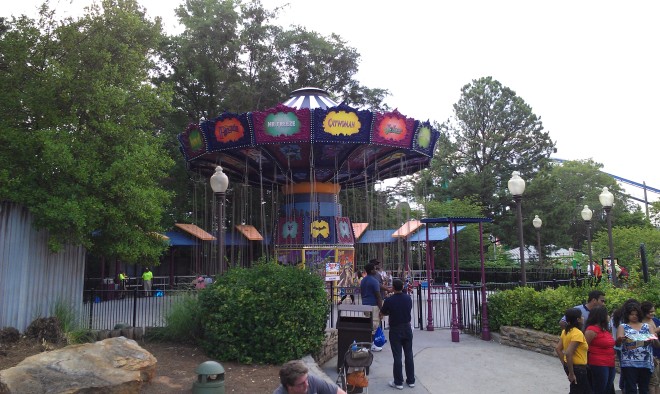 The ride.  Notice all the details with the villain names and superhero logos on the structure.

In 2015, a Larson Super Loop thrill ride and Sellner Tilt-A-Whirl were installed in Gotham City.  The Super Loop was named the Joker Chaos Coaster and placed in front of the former Batman Stunt Arena.  The Tilt-a-Whirl became Harley Quinn Spinsanity and located in front of the Big Top shop, sandwiched between the store and Mindbender final brakes.

Harley Quinn Spinsanity, placed right in front of the Big Top.  We suspect the ride came from the closed American Adventure family park that Six Flags used to operate in the Atlanta area.  This picture appears courtesy of http://thrillography.blogspot.ca/ 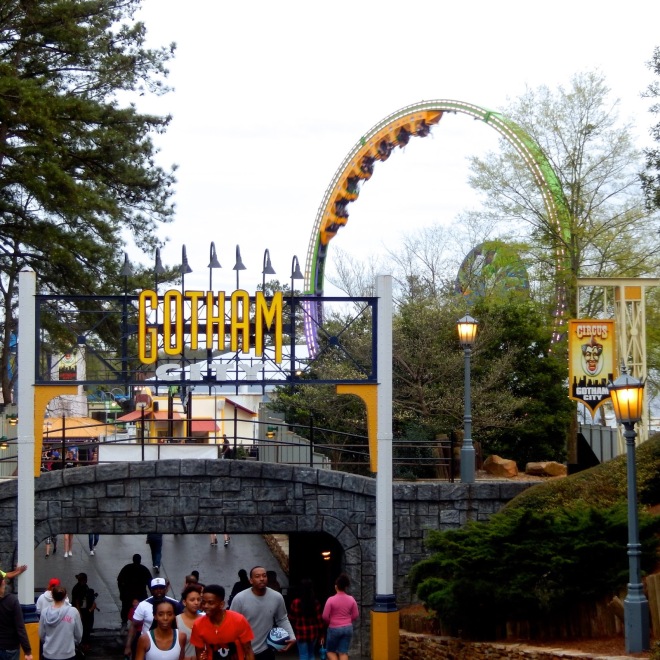 The Joker Chaos Coaster to the right of the path leading to Gotham City.