Phantasialand opened in 1967 and is located in Bruhl, Germany.  Always owned by the Löffelhardt family, it is a very small park, only occupying 69 acres in total.  The close proximity to the village also means they have Alton Towers like noise restrictions.  After building many attractions either indoor or in outdoor/indoor settings, Robert  Löffelhardt, son of the founder and current Owner/General Manager wanted a more reliable and higher capacity attraction for his landlocked park.  Building a full circuit looping coaster fully indoors while not having only a coaster in a box was beyond the park’s budget, so he looked around what had been done previously for the 2006 project.

Nemesis was an obvious inspiration as the combination of an Inverted Coaster along with tight tunnels and trenches give an amazing feeling of speed even if the ride is not the tallest and fastest.  This was the plan and the ride went on the one parking lot the park could build on.  The theme was selected and it was Africa, but what part?  The stereotypical “safari” African theme has been done by everyone before, so he went in another direction and the result is breathtaking.  The new roller coaster would slither and dive in and out of the trenches of an ancient mud city, similar to what you’d find in Western Africa in exotic locales such as Timbuktu and Djenne.  The ride name was chosen and it was appropriate:   Black Mamba.  This relative of the Cobra in the Elapinae family is feared through Africa and is the fastest snake in the world, which was perfect for our new ride.  It is capable of reaching 12 miles per hour and is the fastest striking snake in the world.  For more information about venomous snakes, please visit http://cobras.org/Home/ , a great resource for information on reptiles.

The site was extensively dug up and the new “Deep in Africa” section themed and decorated accordingly.  The architecture is dramatic and the work done with concrete to simulate the plaster and mud buildings of the real cities is incredible.   The ride station was built underground along with the maintenance workshop and transfer track.  Once the 8 car train is loaded, dramatic tribal drums resonate as the lights change and the snake is about to enter its playground.  The ride goes through a tunnel filled with bones and spears and then engages the short 85 feet tall lift hill.  Near the top, it enters another mud building and then goes down the first drop, 88 feet tall due to the terrain.  It goes through a 66 feet tall vertical loop, a small Zero G Roll and then a unique maneuver: the Jr. Immelmann.  This tilted Immelmann is very small, but unlike the inversion on Dueling Dragons Fire, the train does not go upside down, only reaching 90 degrees.  After that, the train continues to dive in and out of tunnels as it goes through two Flat Spin, separated by a turn. 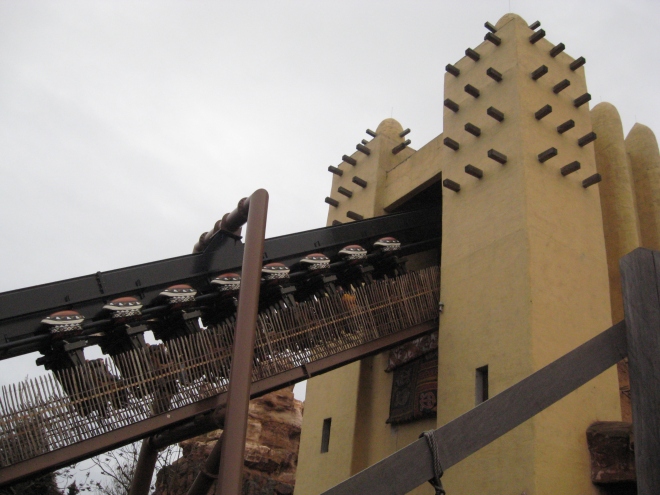 The train going up the lift hill and about to enter the covered section.

Another look at the lift hill.

The first drop.  This picture appears courtesy of Flex. 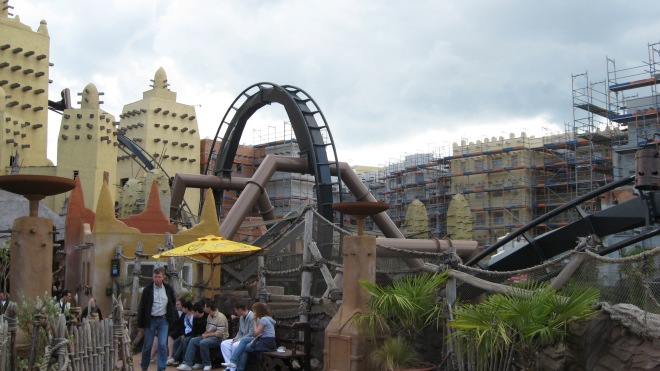 The Vertical Loop sticking out of the ground.

The train in the Vertical Loop.

The Zero-G-Roll.  This picture appears courtesy of Flex.

After the last Flat Spin, things get serious as the snake is on the hunt and homing in as the train start turning and dropping along the trenches and tunnels, causing riders to feel completely disoriented without even turning them upside down.

One of the two Flat Spin.

One of the Flat Spin goes over the waiting line.  This picture appears courtesy of Flex.

This photo shows how tight the elements are and how close they go to the surroundings.

Carved crocodiles were integrated to the walls.

The ride track was painted black and the supports brown.  To keep the noise level down, the track was filled with sand and by putting as much as 2/3 of the track under grade, allowed the park to get planning permission. 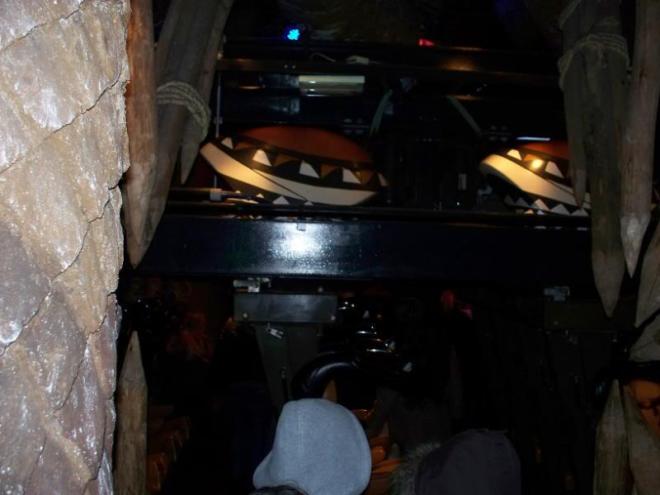 Deep in Africa brought a new shop, a new snack counter and a new park entrance.  Hotel Matamba continues the theme and was the park second 4 Star Hotel, greatly increasing park revenues. It opened in 2008.