In 1987, the Aviary was constructed next to Raging River. This was later integrated in the Bird Paradise complex and closed in 2013 along with the Tai Shue Wan entrance.  This area is currently being renewed. 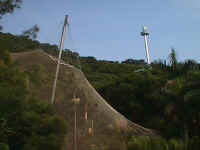 The netting surrounding the Aviary. 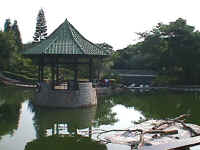 Part of the Aviary. All three of the previous pictures come from the Geocities page.

In 1990, the Middle Kingdom opened to dress up the Tai Shue Wan entrance and bring more foot traffic there.  A large restaurant was constructed and various exhibits showing different era of China built.  In addition to the statues and architecture, various traditional acts such as plate spinning and the dancing dragon took place.  Due to the changing guest profile, Middle Kingdom closed on March 10th 2001 and the various exhibits demolished for later development.  At the time, 3.3 million guests visited the park and the proportion was already up to 33% from Mainland China.  Thus, an exhibit about the 5000 years of China was not very interesting to them as they most likely had something similar close to them already.  The restaurant stayed open to business and was a sit down restaurant offering things like Dim Sums.  The restaurant and various buildings were very useful later due to their use for special events and Halloween Bash. 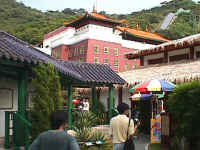 Welcome to the Middle Kingdom. 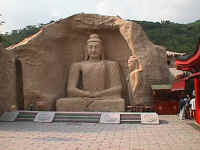 One of the large statue around the Middle Kingdom.

An exhibit in the Middle Kingdom.

This path lead to the Tai Shue Wan entrance.

More buildings in the Middle Kingdom.

A new Animal Exhibit was constructed on the path going from the Cable Car Terminal to the Atoll in the Marine Land area of the Summit.   Shark Aquarium had many sharks on display, but space was always a concern and the park was looking at ways to expand it.

The following years saw the park work on their ride selection to improve it.  The Ocean Park Tower opened in 1992 to mark the park’s 15th anniversary.  It provides a great view of the China Sea and the ride is an Intamin Ride Trade Gyro tower that stands 236 feet tall (72 meters).  The ride was placed in a high point of the Summit and in effect, riders are over 200 meters (656 feet) above the sea once they reach the top of the attraction.

Flex provided us with this picture of the Ocean Park Tower.

In 1993, Ocean Park introduced Kids World, an expansion in the front of park past the Goldfish Pagoda.  In addition to kid’s friendly interactions, three attractions were featured:  a clown themed spinning ride with cars that riders can make go up and down, a beautiful carousel and a Zamperla Balloon Wheel. 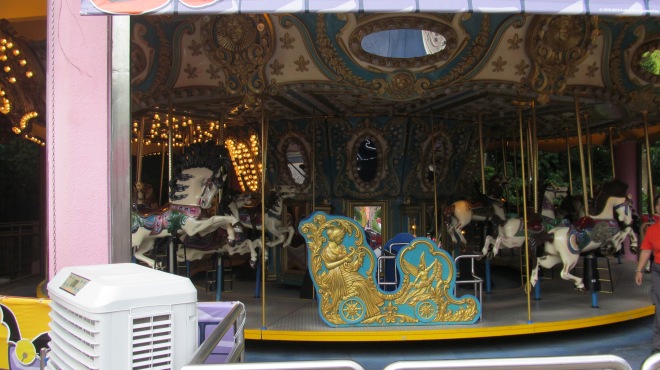 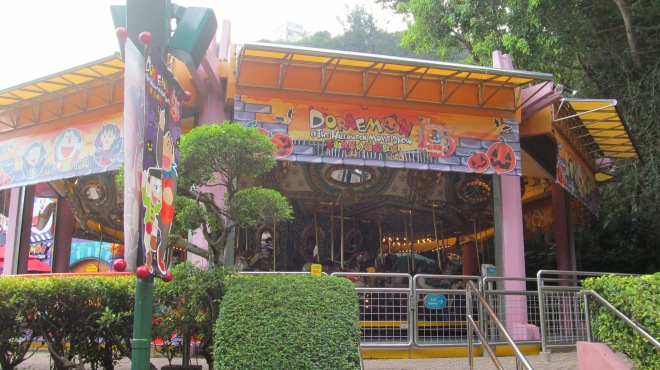 The Carousel was redecorated with Doraemon characters for the 2015 Halloween Fest event.

In 1994, two new rides and a walkthrough attraction were installed in the park.  A brand new Ferris Wheel from Chance Rides was installed near the Dragon roller coaster.  The wheel stands 89 feet tall (27 meters) and has 18 gondolas.  This was a custom model as Chance Giant Wheels usually feature 20 gondolas and are 90 feet tall.  The wheel here has an 78 feet diameter and was placed on custom supports to fit the unique topography of the Summit.

In this photo shot at night, you can see part of the light package installed on the Ferris Wheel. 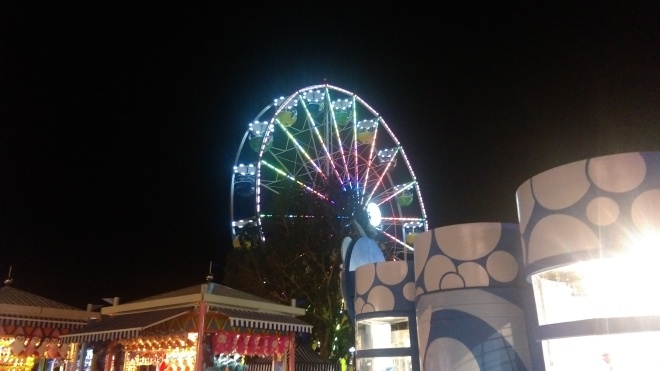 The Ferris Wheel lighted up at night.

The Eagle was placed next to the Octopus and is a Huss Condor.  Huss Condor can best be described as a Scrambler ride placed on a 90 feet tall tower.  This immediately made the ride more interesting since guests could take advantage of the view and look at the China Sea and rest of the Summit.  The ride has tremendous capacity since each of the 4 arms has 7 eagles and each eagle has capacity for two riders, one seating on the other’s lap.  No active restraints were installed and instead, an open cage designed to restrain riders is wrapped around the top of the car.  Hydraulic gates close the only access.

This is a Condor at La Ronde in Montreal, Quebec. This picture was shot during loading and you can see the cage that serves to restrain riders.  The Hydraulic is open and will slide to the right when it is locked.

The Dinosaur Discovery Trail was placed in the Lowlands and guests started their exploration of a primeval path behind Water World.  Many Animatronic dinosaurs were placed around the paths and this was a popular attraction at the time.

Atoll Reef was renovated in 1995 and all the life support systems upgraded.  The aquarium conservation message was also expanded. 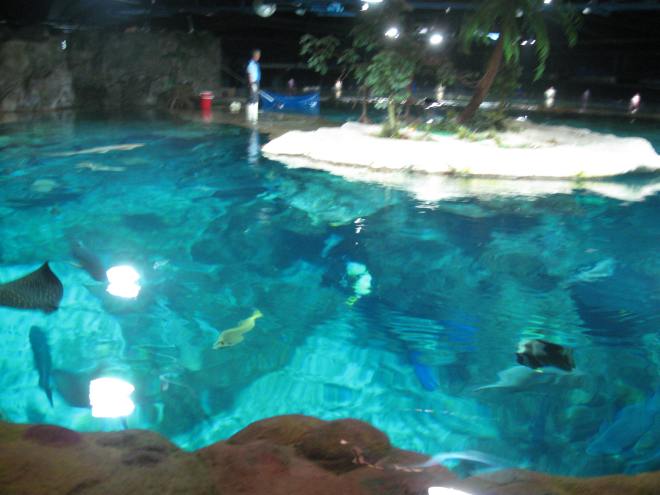 During a visit in 2010 to the park, we visited the Atoll Reef and shot the pictures you will see. This one show the top of the large aquarium. 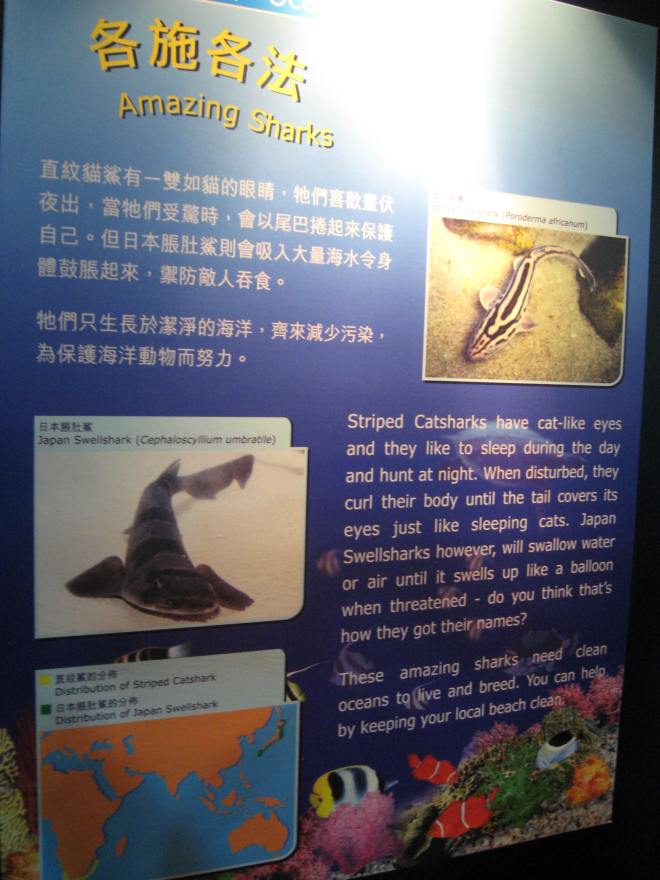 As part of the renovation, those great information panels were added to the Atoll Reef. 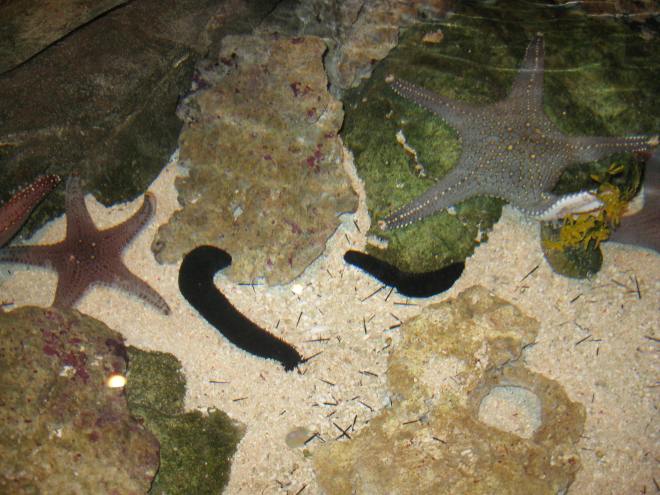 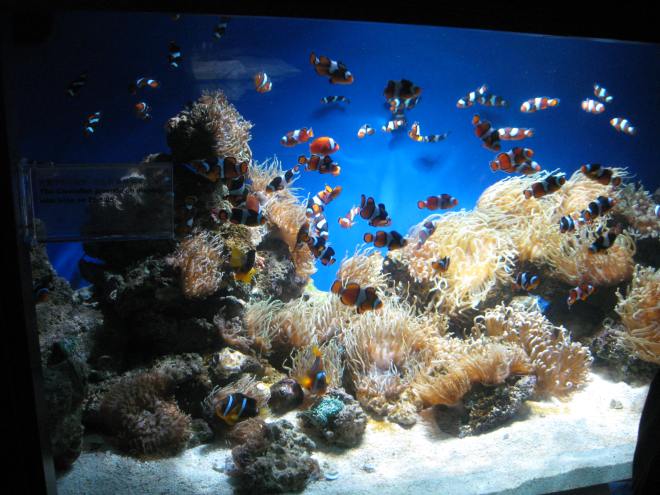 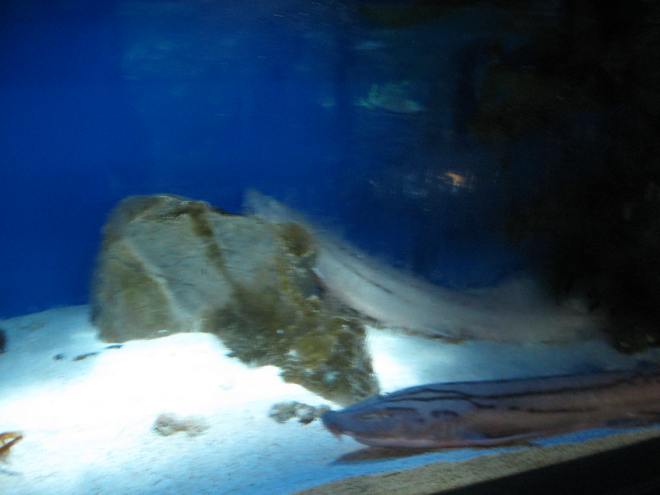 In 1995-1996, the park built a Mine Train roller coaster from Italian ride manufacturer Zamperla S.A.  Until that point, Zamperla had concentrated on smaller log flumes, family roller coasters and the industry largest catalogue of flat rides.  Wild West Mine Train was designed to go on the cliff side near the Raging River and was custom designed to fit the terrain.  The location is the most dramatic in the world, as we are over 279 feet over the China Sea at the top of the lift hill and the view is literally endless.  The ride lift structure is only 69 feet tall, but Zamperla used the terrain very well and the end result is an extremely effective layout with steep drops and sharp airtime moments.

This innovative set was placed near the Mine Train.

The ride starts with a straight portion past the maintenance track and then turns to the left on the lift hill.  At the top, it disengages the lift chain and start accelerating around a flat 180° curve to the right.  The train steeply drop down and then rises up into a unique element: a long 630° helix around beautiful supports.  The supports are shaped like a dome and joins up at the top and the whole shape is pleasing to the eyes.  This was done to minimize footers as this shape is strong enough to support the track while not requiring a forest of supports and their footers.

The hill that follows the Helix, shot from the lift hill by Flex.

The Dome Supports in the background and the ride final brakes in the foreground.

The train rises up at the exit of the Helix and drops down to the ground, even further than the first drop. It then slightly turns to the right as it rises into a mid-course brake and is slowed down slightly.  A sweeping drop to the left followed by a rising turn end the ride after 2329 feet of track.

The final rise into the brakes. This picture appears courtesy of Flex.

The train in the final brakes.

The ride was quite problematic and it took over 3 years to overcome those challenges.  For example, the train could not park itself in the station and the final brakes were too short.  Then, the layout was prone to volleying (getting stuck mid ride in a low point) and the park notably hired Premier Rides at the time as one of the various suppliers to make it work and did not give up on the ride.  Since the Asian financial crisis was underway at the time, they could not afford a costly demolition and new ride. The ride finally opened in 1999 and served to anchor the Adventure Land area of the park.

One of the ride’s car. Restraints are individual seatbelts as well as a lap bar for both riders.

The Ancient World, a walkthrough where guests walk through a prehistoric forest and the Flying Swing opened in 1997.  The Flying Swing is a Zierer Wave Swinger placed near the Dragon loading station and it replaced the Huss Swing Around. 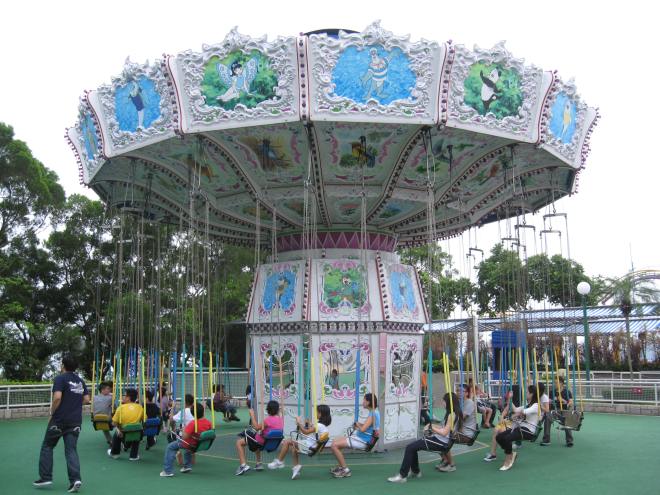 Things were progressing nicely and the park was unaffected by the creation of the Hong Kong Special Administrative Region (SAR) when Hong Kong and Macau were retroceded to the People’s Republic of China in 1997.  But, in July 1997, the Asian Financial crisis started when Thailand ran into Currency issues and this started a snowball effect. Independent issues in other Asian countries such as South Korea, Indonesia, Malaysia and others also appeared in a short time and this had the effect of wiping out most of the economic gains in the area. Hong Kong interest rates were hiked in 1998 and all this started affecting tourism in the Hong Kong SAR.

As things started getting tighter financially at the park, the park had no choice but to close Water World.  The facility location was an eyesore most of the year and the park was in desperate need of upgrades.  With money so tight, the park was closed and left vacant for years.  Why was it an eyesore?  Remember that it was only open 100 days out of the year and the rest of the year, guests had to walk past half emptied pools and deserted facilities to access the park.  It gave the park a terrible image and the park had to work harder once inside the gate to shake that first impression.  Plus, the park at that time did not have such a wide customer base and the potential return on investments from investing in that park was simply not there.

The brightest moment of that difficult period was the arrival of Jia Jia and An An in 1999.  Jia Jia and An An are a pair of Giant Panda that were gifted by the People’s Republic of China and they now live in the Hong Kong Jockey Club Giant Panda Habitat area in the Waterfront.  This helped the park throughout the difficult years and as for Jia Jia, she is now the oldest Panda living in a zoo in the world.  She was already 21 years old when she arrived and with the help of the great staff at the park, she is now a very respectable 37 years old. She now holds the World Guinness records titles for oldest Giant Panda ever to live in captivity and Oldest Giant Panda living in Captivity.  Her male companion, An An, is now 29 years old.

One of the Giant Panda, laying comfortably inside the Amazing Asian Animals pavilion.  This picture appears courtesy of Flex.

https://parkvault.net/2021/06/13/upgrades-and-new-colors-for-the-wildcat-the-third-part-of-the-story-of-how-frontier-city-adopted-a-roller-coaster-from-missouri/
We just received this exceptional book about Philippe Bourguignon, the man who helped revive Disneyland Paris in 1993. We are writing a text about the beginning of Disneyland Paris and this will be invaluable help.
https://parkvault.net/2021/06/08/a-wildcat-appears-in-the-backwoods-the-second-part-of-the-story-of-how-frontier-city-adopted-a-roller-coaster-from-missouri/
https://parkvault.net/2021/06/05/nine-lives-of-a-wildcat-the-first-part-of-the-story-of-how-frontier-city-adopted-a-roller-coaster-from-missouri/
Anaconda at @kingsdominionva opened in 1991 and we purchased in 1992 a cap that included this neck cover. @ridewithace @sands_sansei_media @rollercoastersalesguy @mark_scott_rose #legacyofarrow
Did you know Moonsault Scramble had two trains? Learn more about #moonsaultscramble , the record breaking roller coaster that #takabisha in the photo replaced. @fujiqhighland. @premierridesinc and @intaminofficial are also mentioned in this article.
Loading Comments...
Comment
×
%d bloggers like this: