Arrow Development experimented in the 1960s with using round rafts in children’s rides.  Under the generic name of “Rub-A-Tub,” they were slow-moving attractions with the only thrilling portion consisting of a small drop and lift somewhere along the ride path.  The boats relied on their fiberglass shell to float, and steel rails bolted around it to not have the fiberglass material hitting the sides of the trough, which was similar to their Flume fiberglass trough, but wider.  Given the size and buoyancy of the boats, it was impossible to include rapids or any choppy water since there was no way to empty the boat except by outside means, and this would make them prone to sinking. 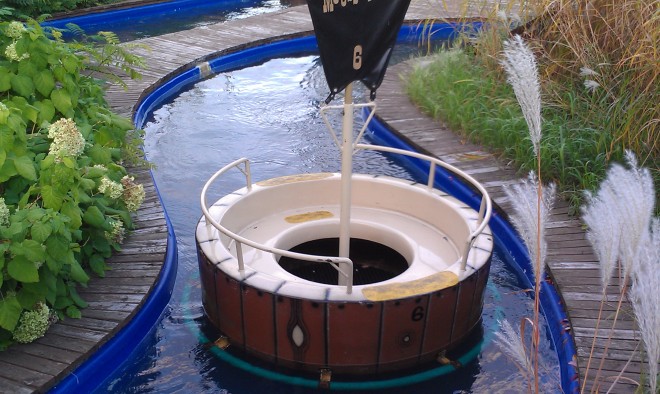 The one remaining Arrow Rub-A-Dub is at La Ronde (Montreal, QC).  Now known as Les Joyeux Moussaillons (The Happy Sailors), it was known before 2005 as L’Ile Aux Tresors (Treasure Island).

It opened in 1967 and had its course lengthened at some point in time.  We estimate it happened in the 1980s as the park was making large changes.

We discovered this photo in the archives of the City of Montreal.  As you can see, where today the course goes, there used to be some Hampton “Umbrella” kiddie ride.

This other photo comes from the archives of the City of Montreal.  You can see the original colors of the boats and the original trough colors. 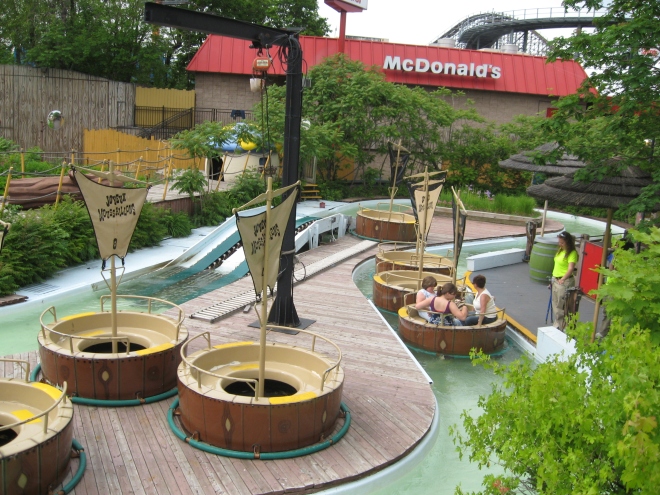 The current loading area and drop area of the ride.

A close-up of the small lift and drop.

In 1979, after watching people kayaking in races, notably during the 1972 Munich Olympics, Bill Crandall, the General Manager of Six Flags Astro World (Houston, TX) had an inspiration to bring that kind of experience to his park.  Now, how to do it?  Arrow Development founders Ed Morgan and Karl Bacon had thought of a way to simulate white water rafting using round fiberglass boats.  But, the owner of Arrow at that time, Rio Grande Industries, saw too little value in the product since they would only be fabricating boats, lifts, and control items.  There were no expensive fiberglass troughs, and steel supports to manufacture since the ride would be dug into the park land and then laid out in concrete.  So Rio Grande Industries pulled the plug on that and left the market with a void.

Bill Crandall sat with Intamin AG, a ride broker and designer from Switzerland, who had a branch in the United States. They both explored possibilities and settled on an incredible experience: Intamin would design large round fiberglass boats with six pairs of two seats; to avoid the issues with buoyancy Arrow had run into, they would float on large floatation collars that extend out to the side. This meant that they would not need any guard rails mounted to the rafts since the rubber floatation collars would act as a bumper. The original floatation collar design had square chambers, and this was quickly changed to a round multi-chamber ring with reinforced sides after a few seasons. Interestingly, those chambers are only filled to 2 or 3 PSI.

Bev D. II Blackwood  was kind enough to provide us with those incredible pictures of Thunder River while was under construction and testing.

Those floatation collars may look from the outside like they cover the whole bottom of the raft, but this was unnecessary, and you can see in this picture of a replacement collar from Zebec Inc. it is a ring. It secured to the fiberglass raft that guests sit on with ropes.

The rafts have various drain valves that are simple in design but very efficient and safe in practice:  each opening has a plastic ball, and when the ride is in operation, it rests at the bottom and doesn’t allow water in.  When the raft is going up the lift, the ball moves to the side and allows the water at the bottom of the raft to drain out.  The layout uses cement troughs that form a downhill path, and various obstacles were placed along the way to give choppy waters and to soak riders.  In the end, two lift hills brought the boats back to the loading level using dual rubber conveyor belts. There was a double station configuration, and each side used a few sets of conveyor to hold and move the boats.  This was also useful to make guest boarding safer as the boats could not move at all.

Jesse L. Mask posted this rare picture of the station and river of Thunder River at Six Flags Astro World.

The first River Rapids courses to appear at Six Flags were inspired by the historic Augsburg Eiskanal in Augsburg, Germany. It was constructed in what then West Germany as a controlled and calculated course for Canoe Slalom races during the 1972 Olympics in nearby Munich, and it is still in operation today. It was the first such course, and given the high construction cost, Canoe Slalom races were not programmed again in the Summer Olympics until the 1992 Games in Barcelona, Spain. One thing that makes Augsburg Eiskanal unique is that no pumps are involved. Instead, a new channel between the Capital Creek and Lech River was dug, and the bottom filled with sculpted concrete. Various rocks and barriers were installed along the course, and five hinged doors were installed along the path and moved to change the water flow. This in turns change the whole experience with no expensive modifications to the course. The current is quite severe as there is a 13 feet drop between the Capital Creek and Lech River.

Howard Morland posted on Wikipedia this great diagram of the Augsburg Eiskanal course. 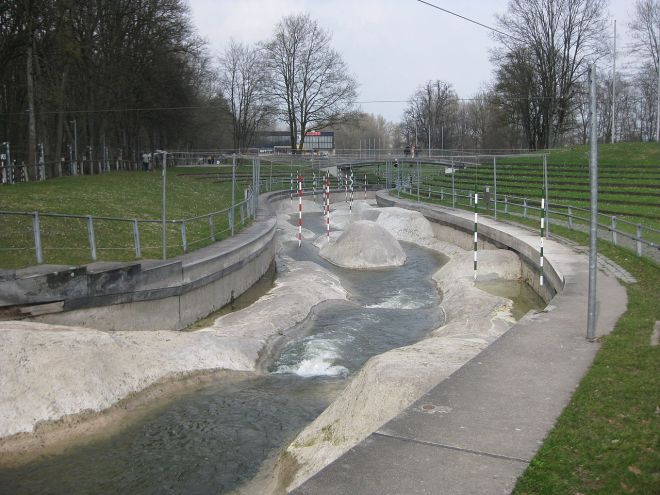 Thorsten Hartmann posted to Wikipedia this fascinating shot of the emptied course.

A vast reservoir was built next to the ride at Six Flags, and the water at the bottom of the lift is profound; that is where the ride three submersible pumps collected the water and brought it back to the highest point:  the load.  After the water is released, it flows out downhill until the end.  Why is there a reservoir then?  Because when the ride is not in operation or the case of an emergency stop, it stops the pumps and the channel empties and returns to the reservoir.  By only doing one massive fill each season for seasonal parks, it doesn’t tax the park infrastructure as much.

Another photo from Bev D. II Blackwood, showing the ride entrance under construction.

Thunder River, the world’s first white water rafting ride in the world, opened in 1980 to critical success, but there were quite a few challenges to overcome after. 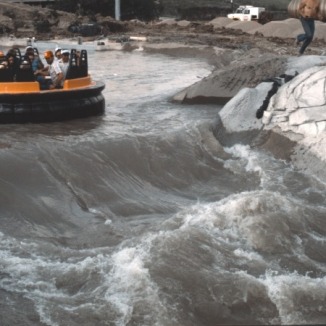 Those four pictures show the steep dips the course featured, something that was changed for further installations.  The photos are again from Bev D. II Blackwood.

Now, for the ride design, the original idea, as shown in concept arts was to release multiple boats at once in the vast river, and those would make their way downhill, sometimes slowing down and passed over by other rafts.  It would give a very random experience to riders, and you could safely say that no two rides were ever the same.  Unfortunately, while exciting in theory, this was an operational nightmare.  Why?  Because some boats would get stuck in corners of the river, and workers had to go down to that location and use ropes to move the boats back into a position where they could continue to float.  The park then experimented with at least six different kinds of bumpers and guide rails placed along the river, and the last configuration with wooden guide rails bolted into the concrete finally did the trick.  It solved the stuck boat issue and made the ride a lot more reliable and easier to operate. 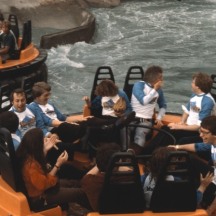 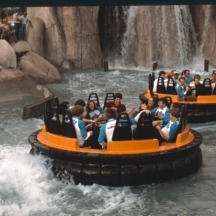 Those three photos from Bev D. II Blackwood show how close boats ran during testing while the ride was under construction and getting adjusted.

An example of the operational issue the ride had: if the boats from each platform were dispatched at the same time, they would risk bumping each other approaching the first set of rapids.  The side closest to the queue had a straight shot to the rapids while the other had a more meandering course and, if they hit each other before the rapids, they would stay together for the course, often pushing one out in a stranded area.

A result of the testing lead to those steel poles installed in front of the waterfall, to prevent boats from getting stuck under it.

Thunder River was closed in 2002 for necessary infrastructure work and then reopened. The ride closed with the park in October 2005, and the ride equipment spread throughout the Six Flags chain with similar Rapid attractions. The course was sadly demolished.