In 1982, Carowinds (Charlotte, NC) wanted a new style of River Rapids where the course would be meandering and random through a forest near the park entrance.  The Intamin 12 passenger rafts were too big for the proposed course and there were delays in the development of smaller boats from Intamin, so KECO (Kings Entertainment Company, owner of the park at that time) built the course and did an in-house solution for the rafts.  The KECO boats had 8 seats divided in 4 sections of 2.  But, they sat too low and were a constant headache to the park.  When Rip Roarin’ Rapids reopened in 1983, it had a new fleet of Intamin 6 passenger rafts.

http://carowindsearlyyears.com/ provided us with this very rare picture of the KECO rafts that ran on Rip Roarin’ Rapids in 1982.

You can see the raft in the middle of the course in this picture. http://carowindsearlyyears.com/

The ride today, with one of its Intamin 6 seater raft going under the midcourse  waterfall.

Along with Rip Roarin’ Rapids, Intamin debuted their brand new 6 passenger raft around the world at Kings Dominion (Doswell, VA) as White Water Canyon, Adventureland (Altoona, IA) as the Raging River and Efteling (Kaatsheuvel, Netherlands) as the Piraña.

White Water Canyon at Kings Dominion has a long winding course through the woods between the Shenandoah Lumber Company Arrow Development Log Flume and the Grizzly wooden roller coaster.  It expanded the Old Virginia section and was very well received when it opened at the park.  The layout there has a lot more turns than the previous installation and while it did not feature the sculpted rockwork seen at Six Flags and Opryland, the park still decorated the ride in their own more natural way.  They scoured every quarry within driving distance of the park and collected the largest and most impressive rocks they could find.  After the course was finished, they placed those rocks along the path and this make it look like we are looking at a thousand years old course that the water has cut its way through.  One feature also appeared after making its debut the previous year at Carowinds:  the midcourse float through.  What it means is that after the first lake, that is also equipped like earlier rides with a wave maker, the boat floats past an open stretch and only decisively fragile looking timbers prevent it from falling down to another part of the river.  After passing a whirlpool, the boat floats past the upper trough and get drenched from the waterfall it generates.  A second lake placed after has 4 water geysers installed: 3 are automatic using photo-switches, but the 4th was operated by an operator who sat in a tower.  He would use it to soak dry riders on the boat.

Kings Dominion provided us with this unique picture of White Water Canyon.  You can see the wooden course and some of the rocks that were placed around the river.  https://www.kingsdominion.com/

In this other picture from Kings Dominion, you can see how severe the rapids get on this ride.  https://www.kingsdominion.com/ If you look behind the raft, you can see a safety feature present on quite a few river rapids: gates.  At the end of a pool, you will sometimes see some form of gate and an operator present in a tower nearby space out the rafts to avoid bottlenecks at critical points. This picture appears courtesy of https://www.kingsdominion.com/

The last section of the ride is through a wooden shed with water curtains on the side and then the ride concluded with a lift hill.  White Water Canyon use a single station and load two rafts at a time.  Raging River has a similar layout complete with a tunnel at the end, but there is no Midcourse Float Through and instead, a water curtain and waterfall were installed at the exit of the tunnel to soak riders.  It also use a single loading station.

Negative-G provided us with this picture of Raging River at Adventureland (Altoona, IA).  http://www.negative-g.com/

In 1982, Efteling had started construction on Piraña, but the extensive and never seen before on a rapids ride theming took a lot longer and delayed the opening to 1983.  The first River Rapids ride in Europe, Piraña features incredible Pre-Columbian rockwork, statues and a lot of water features along its courses.  The ride was rejuvenated and rebuilt in 2015 with new effects and scenery and it looks even more spectacular now than it ever did.  The ride is notable for one thing though:  the first turntable loading station on a river rapids in the world.  The park had the necessary land and wanted to get the most capacity possible.  They got it with over 2000 guests per hour when all 35 boats are running.  The following pictures all came from http://rue-efteling.blogspot.ca/ and showcase the ride after its 2014 refurbishment.

With 35 boats running, scenes where multiple boats are in the same area are common.

One of the ride waterfall feature.

The ride was the first to feature a double waterfall feature.

In 1984, Canada’s Wonderland (Vaughan, ON) debuted their version of White Water Canyon at the back of the park.  Located at the back of the park on undeveloped property and with their experience from designing over a dozen rapids ride under their belt, Intamin designed the first Rapids attraction that does not require lakes throughout the course.  Two “lakes” were included, but they are completely separate from the ride channel and are there as a theming element.  This in effect made the ride a faster experience and it gives White Water Canyon a distinctive look.   The course features the two decorative lakes, a fast cruise down the forest before going through a very long tunnel that goes under the ride entrance and exit path.  The first lake features an automatic water geyser and the second three coin operated geysers that on lookers can use to soak their friends and family on the ride. 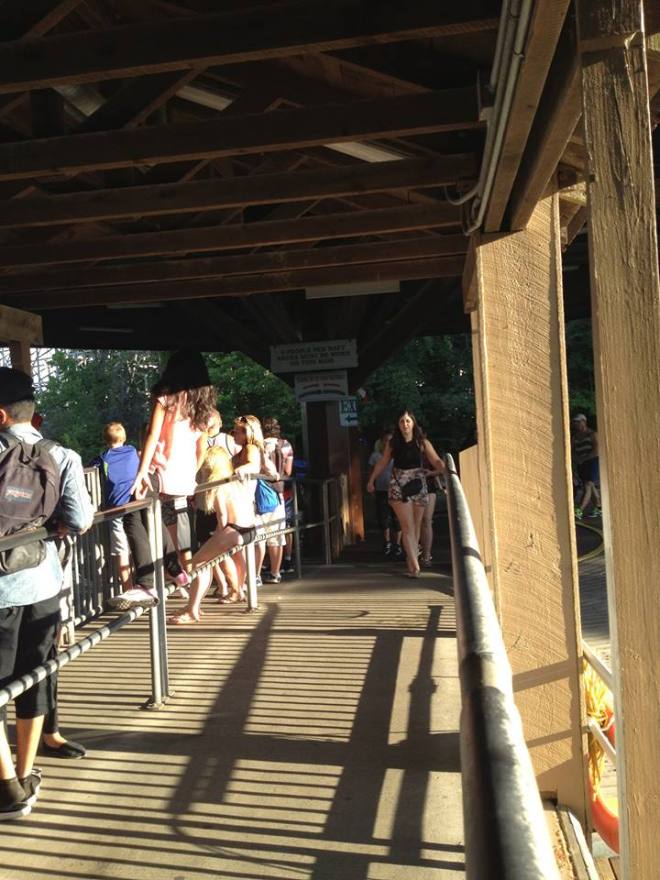 The waiting line goes over the river and in the forest until the loading turntable.  The exit is on the right in this picture. 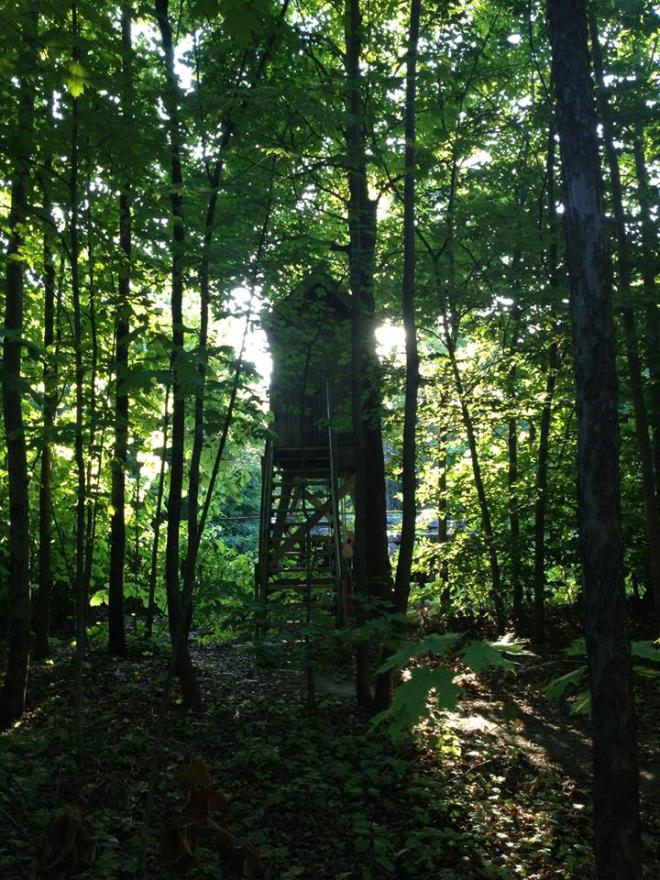 One of the elevated watchtower that operators sit in to monitor the course.

For high capacity, White Water Canyon was built with a turntable.  You can see the end of the lift and where it reaches the turntable. 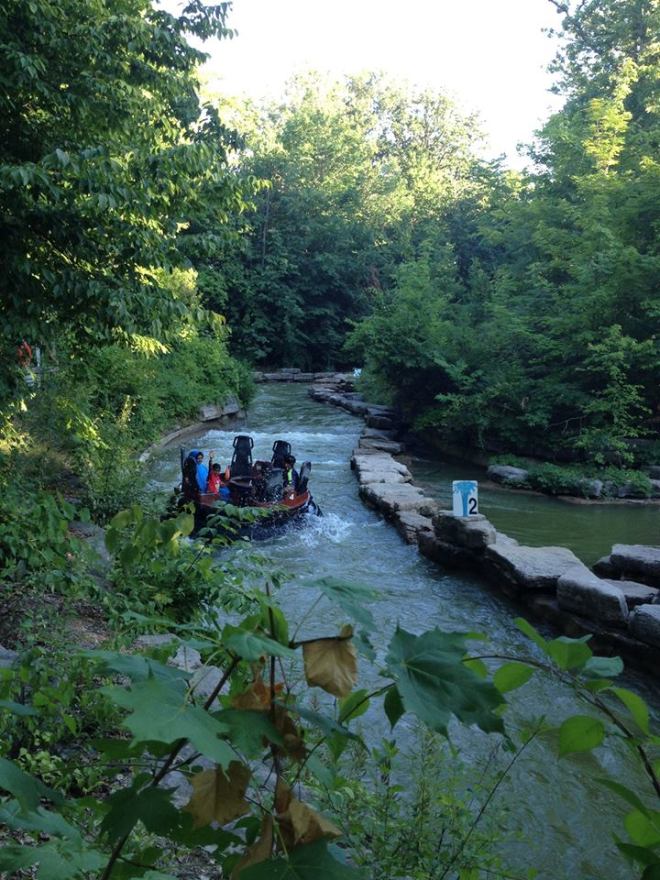 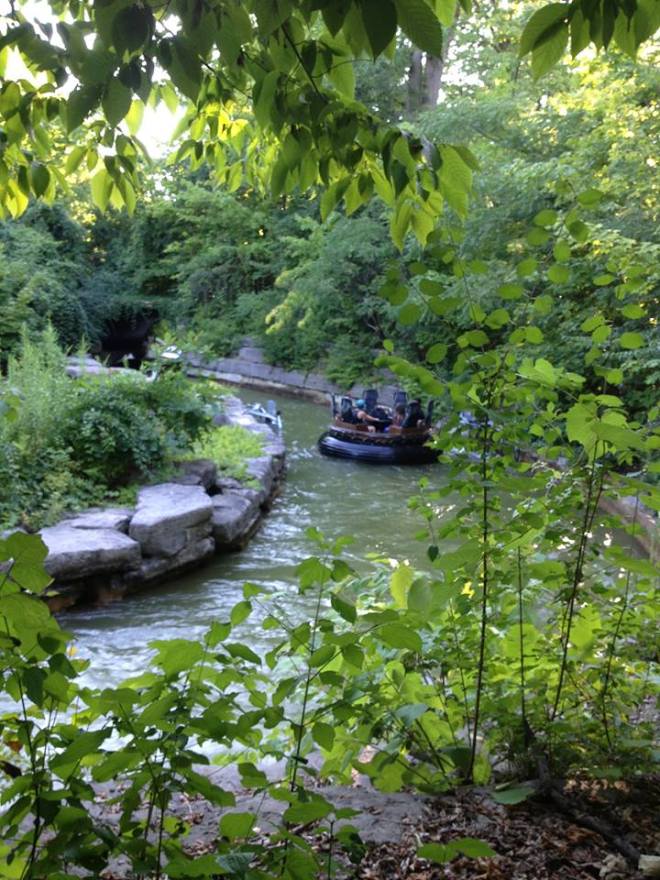 As you can see in this shot through the trees, the river cut through a lush and luxurious forest.  The sides of the river were also well integrated. All of the above pictures of White Water Canyon in Canada were shot by Sarah Tangler.

At the exit of the tunnel, you hit the best rapid section on the ride and riders get a preview of what is coming: the waterfalls.  The beautiful sculpted waterfalls are all mostly for show except one that was designed to dump water over half the boat.  The ride then concludes and currently, it is the only river rapids attraction in Canada.

In this other picture of the ride, you can see that the ride was originally equipped with Intamin headrests.  https://www.canadaswonderland.com/ Since that time, they have started to be swapped out with the same headrests that equip Hopkins river rapids. 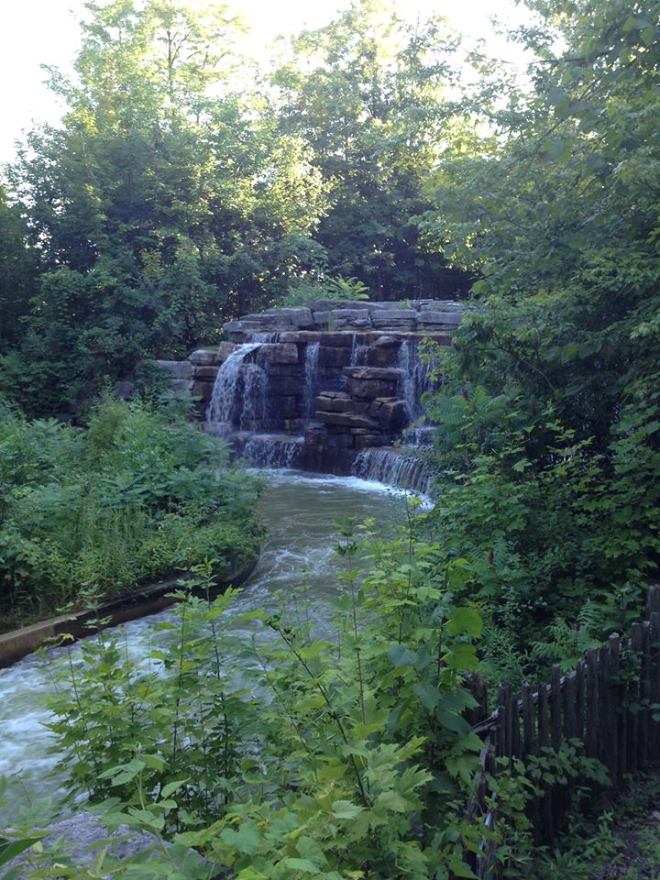 The space required for early Rapids attraction was impressive and this made it a difficult fit for many older parks.  For example, looking in Canada, the other parks that could install River Rapids attractions cannot for their own reasons:  Calaway Park in Calgary, AB preferred to replace their older log flume attraction when it came time to invest in a new water ride experience.  Why?  The cost of digging up the channel, the holding lake and then laying down all the concrete is always measured in millions of dollars.  It was more cost effective for the park to take their budget and use it to get a high capacity flume from WhiteWater. For more details on Calaway Park log flume, please read here: Timber Falls at Calaway Park

Over at La Ronde (Montreal, QC), budget has never been the issue, but space is.  There is simply no way unless you remove a parking lot, a large roller coaster or the lake to fit the ride in.  Removing a parking lot is impossible since the park is already very limited in parking space.  Removing a large roller coaster?  They could never fit a replacement ride in the park after.  Removing the lake?  The park most beautiful and popular attraction are the summer firework nights where 30 minutes shows take place behind the lake.  Removing the lake would effectively spell the end of those since you could not shoot the fireworks over the rapids attraction due to the fallouts that would contaminate the water.