After the press conferences, members of the media were invited to attend a media meeting in a meeting room.  In attendance were Paul Nolan, June Ko and Wuthichai Luangamornlert, Managing Director of Siam Park City.  One interesting piece of news out of it is that IAAPA is preparing a second Asia office, in Shanghai this time.  It will allow them to serve the needs of its Chinese members better and allow the current Hong Kong office to work on the other regions of Asia.

We asked them what impact they were forecasting at bringing the Asian Attraction Expo to Singapore.  Their answer was that their goal is to rotate as the unique requirements for such a show only allow a few cities in Asia and Singapore ticks off all the boxes.  Being in Southeast Asia also brings a different set of attendees.

Our second question concerned the unique cultural background of Singapore, Malaysia and Indonesia and how IAAPA adapted to serve the needs of its members better.  They mentioned how Fun is the universal language of fun and companies want to come to IAAPA to learn.  Working as a team is something being pushed, and the dozens of international exhibitors offer various experiences and give them a chance to get inspired.

On the subject of Learning, we attended two Educational sessions offered during the show: Young Professionals Forum and the Special Event session featuring Todd Hougland from Ocean Park.  Both sessions were well attended and very informative with one constant in each:  the workforce and management teams in Asia are young and very eager to learn.  During the Young Professional Forum, Victor Danau from Ripley Entertainment was the moderator for a discussion involving Mika Nur Faezah (Regional Director of JNE&LC Asia and current sales director for Zierer Rides in Southeast Asia) and Roger Ong (Resorts World Genting).  The constant for both is that they started outside the industry and then moved in, bringing a whole different view on things and they thrived in their new roles.  Roger Ong, for example, worked with the Red Bull Formula One team, and Mika Nur Faezah was an insurance underwriter for Lloyd’s of London.

Following the very successful forum, attendees were invited to the DC Comics Superheroes Café for the Young Professional Reception.  Different industry legends and principals were asked to mix in and network with the young professionals, leading to great exchanges.

Creating and Elevating Special Events was an incredible presentation from Todd Hougland.  As detailed in this precious post about Ocean Park:  Welcome to Halloween: Part 4 of our look at Ocean Park , you can see how Special Events saved a park and allowed them to thrive against a new competitor.  They are lower capital intensive, have a specific timeline and can be used to drive attendance in a quieter period.  Also, unlike a new ride where you only get one media event to promote it, you can make a lot of valuable market noise in the media.  This year, Ocean Park was even able to take what would be a mundane casting call for Halloween performers and turn it into a media happening at a local mall.  That is what a successful special event can do. 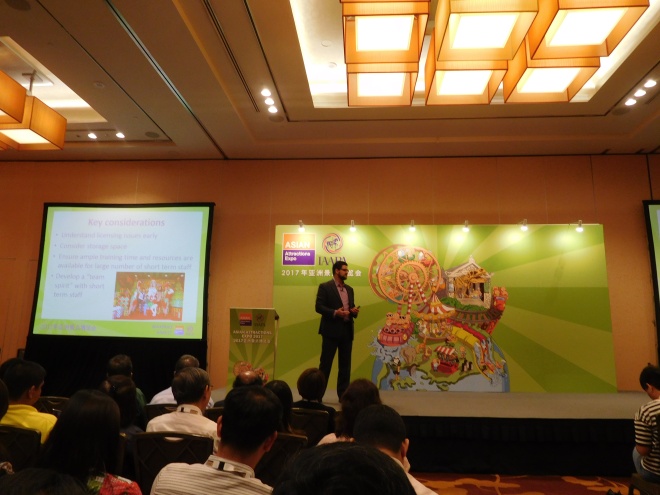 Todd Hougland during his presentation.

Preparation is also a thing that was pushed.  Where do you store your props and seasonal items between events?  How will you staff the additional shows and attractions?  This can make or break an event and is quite remarkable.  Building team spirit is something that was discovered to bring great loyalty and returns.  Unique shirts, badges and the like can integrate what would be temporary employees in the fold and give them a great feeling that they are also part of the team.  It works out so well at Ocean Park that performers will take time off from their day job to play ghosts during Halloween Fest.  Todd even mentioned how a successful Banker had a great time performing at the park.

Creating a Food and Wine style event was an incredible success at the park as well.  Young adults came in groups after work using the brand new MRT Station at the park.  20 outside vendors were selected and rotated in individual booths in Aqua City.  The rotation is quite smart as it keeps the event fresh and gives more incentives for people to visit more than once.

Asian Attraction Expo brought a different set of exhibitors that we are used to seeing in Orlando at the International Attraction Expo.  One unique experience we tried was the Holoverse hologram projection room for Euclideon International.  Guests get into a room and are given polarized glasses and wear a belt around their chest.  Then, they get to experience all kinds of virtual environments such as a stampede of elephants and swimming on the bottom of the ocean.

The first Holoverse center was installed in the Gold Coast region of Australia in Southport, and more locations around the world are planned.  We also could see that kind of special room integrated into special events at parks and FEC’s due to the small space requirements. 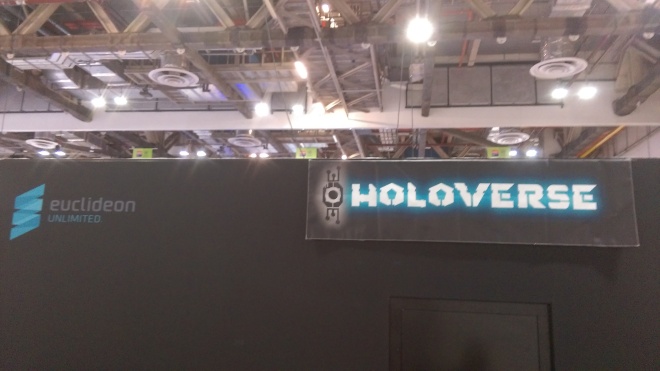 The temporary room built at AAE and the Holoverse logo.

Okamoto Manufacturing Company from Japan is a large operator and manufacturer of attractions for the local domestic market there.  They operate a few facilities such as Rakutenchi and produce high-quality attractions that they are trying to export around the world right now.  They also do a lot of off-season ride refurbishment. 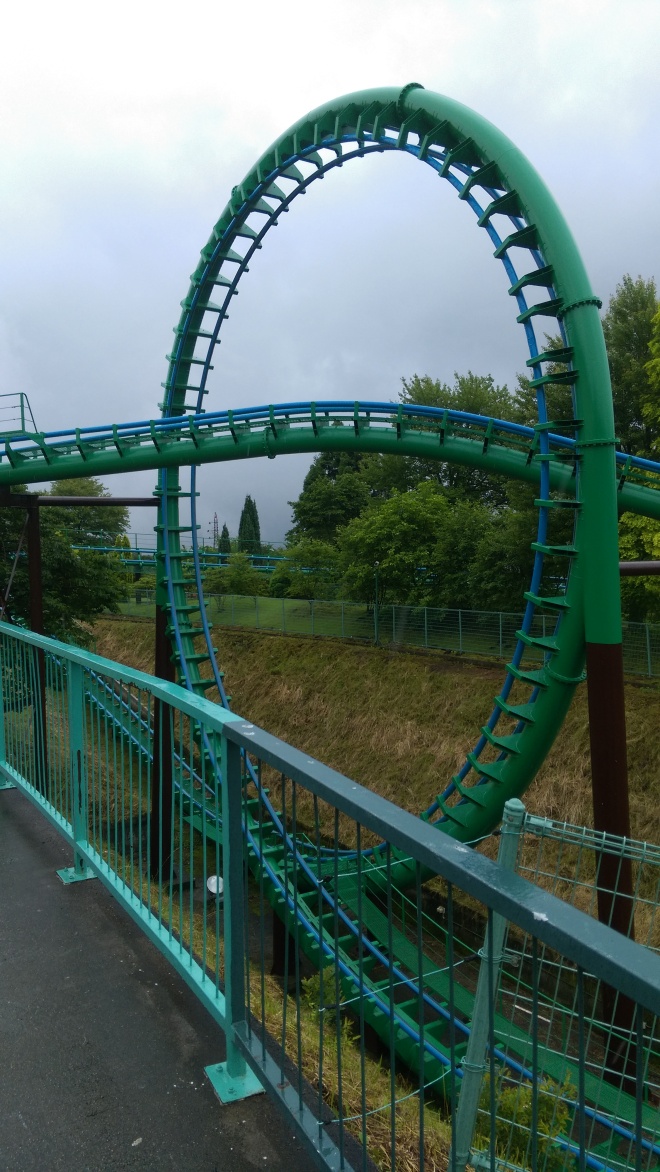 Remember the viral video about a “spa amusement park” that came out last year?  The park in question was Rakutenchi in Beppu, a warm volcanic area known throughout Japan for its hot springs.  The amazing thing is that from July 29th to July 31st, 2017, the spa amusement park will happen as part of a special event.  You can find more information here:  http://www.gokuraku-jigoku-beppu.com/yuenchiplan

Walking through the show floor, we discovered an amazing invention from Universal Terminal Systems, a Russian company.  They were showing off the AR-Sandbox project, and the ISandBOX was exactly what the name says.  You have a nice sized sandbox, and you can select various games and things to do with it.  Want to show students how rivers are created?  You selected that, and when you played in the sand, you’d see water projected using Augmented Reality on the valleys and peaks you created.

The possibilities are infinite, and the staff mentioned that even professionals such as architectural firms are looking at using the technology.  In an FEC setting or daycare center, this would bring hours of fun.  Depending on the games, you could even use with young adults as well.  For more information, please have a look at their youtube channel here:  https://www.youtube.com/channel/UC549Y5dMaNm-PU3bYvXjwpA

http://isandbox.co.uk/products/ provided us with this great picture of the iSandBOX.

Hot Games is a popular magazine for coin-ops equipment based in Taiwan and Mainland China.  Taiwan is in reality a hot bed of innovations for coin-op games and gambling machines.  It is not yet well known outside of the region and Hot Games and their various publications do a great job promoting it around the world.  They also give a unique perspective on the industry from a point of view rarely seen in English in print and online. 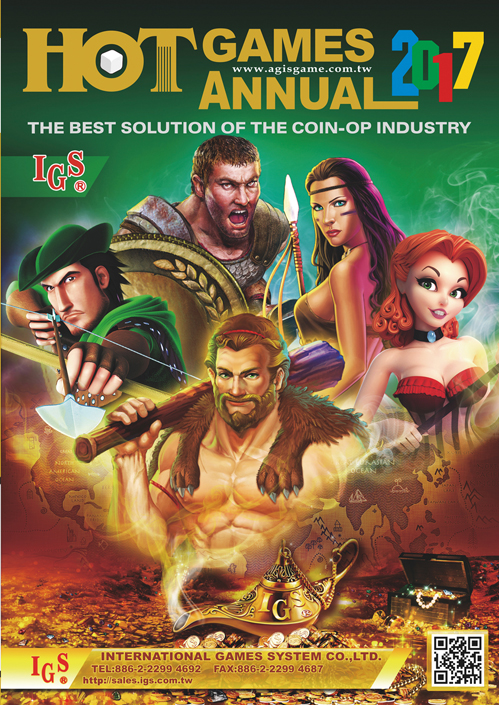 Hot Games provided us with this scan of the front page of their 2017 Annual magazine.  http://www.agisgame.com.tw/