Togo International was in the 1970’s and 1980’s a major innovator of roller coasters.  Among their many accomplishments was the addition of a stand-up roller coaster train to one of their looping coaster at Yomiuriland near Tokyo, Japan.  Owned by the Japanese media conglomerate Yomiuri, owners of the Yomiuri Tigers baseball team, the Yomiuri Shimbum newspaper and other media properties, Yomiuriland opened in 1964.  Sharing a valley with a training field for the Yomiuri Giants, the park has a dramatic location which landed itself very well to terrain roller coasters.  The first roller coaster to open at the park was the SL Coaster, a mine train style roller coaster that dived into a valley and featured the lift hill at the end to take the train up.

SL Coaster, a Togo roller coaster with the Bandit in the background.

In 1979, Togo provided another roller coaster to the park.  The Looping Coaster featured a simple layout that was very efficient: 82 feet tall lift hill, a drop into a loop, a helix and that was your layout.  To spice things up in 1982, Togo modified the station with a sliding transfer track.  The existing train was retained and placed on the right side and feature flush loading where riders enter and exit from the same side.  The right side received a brand new Stand-Up train.  This was the second such utilization of that Togo innovation since Dangai at Gotemba Family Land near Mount Fuji had received the first the day before.

Our friend Flex provided us with this great photo of Momonga Looping and Standing Coaster.

The idea here is that when both platforms are in operation, the track with the track will slide to the center and align with the lift hill and track that enters the station.  The train is then driven up to the lift hill using pusher tires and goes around the circuit.  When it returns and park in the station, it slides back to its side so the other can then be dispatched.  This was a major innovation that boosted capacity and offered two different experiences on the same track.  Premier Rides later used a similar dual station approach for Mr. Freeze at Six Flags Over Texas (Arlington, TX) and Six Flags St. Louis (Eureka, MS).

Both trains and the sliding track can be seen in this photo from Flex.

For the 1988 season, Togo installed its largest roller coaster at the time at Yomiuriland.  Using the valley to its full advantage, the ride featured a steep 167 feet tall lift hill. The ride then took a different approach compared to the large looping coasters that were popular around North America and Europe by adopting a layout that resembled a giant wooden roller coaster.  The view at the top of the lift is incredible and worth a ride on its own. 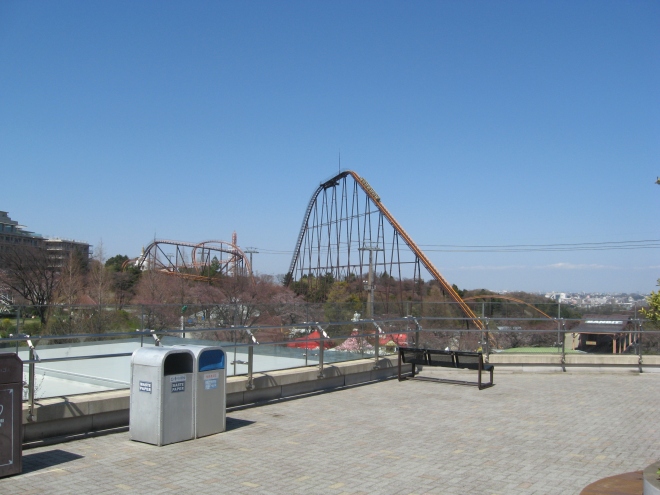 With the help of the valley, the Bandit as it became known started things off with a drop that goes below grade and helps the train reach 68 mph.  It then rises in a large fan curve that is typically only seen on wooden roller coasters. A rising 540° helix quickly takes the train back up and it drops down to the forest before a rising banked turn to the right.  Like a wooden coaster, it follows up with an airtime hill and another banked curve.  The speed is constant as the track is getting lower and lower which is why the ride has an amazing statistic:  the height difference between the top of the lift hill is an incredible 256 feet.  If the ride had been built on flat land, it would have held the undisputed title of tallest roller coaster in the world from 1998 to 1996 when Togo opened its next giant steel coaster.

The park sky ride goes right in the middle of the ride.  This photo appears courtesy of Flex.

Flex provided us with this great photo of the first drop and entry into the helix.

A banked drop to the right follows and brings the train fully into the valley.  The speed at this point is incredible and very close to 68mph amazingly.  It then rises up into a flat banked turn to the right and that is where the mid-course brakes were installed.  The train was not slowed and dropped down into the valley again, not losing any speed.  A rising left hand curve took us close to the SL Coaster and the ride then concluded with an extra tire lift hill.  This was installed in case the ride ran slow due to cold weather and to make sure the train could reach the final brakes.  The journey is an incredible 5118 feet long.

The deepest point of the ride is the drop in the top right corner of the photo.   This photo appears courtesy of Flex.

The ride was delivered with three trains and as was customary in Japan at the time, riders were secured with over the shoulder restraints.  Each log shaped train is composed of seven four passenger cars and the station is quite unique.  The ride use separate loading and unloading position and the transfer track located on the left side of the main track in the station.  Sliding track switches are positioned before and after the station to bring trains in and out of service.

Theme Park Review provided us with this great photo of the loading station.  You can see a tarped up train on the right.

Theme Park Review provided us with this great shot of the original rolling stock.  You can see the original log and shoulder restraint.

You can see the transfer track in the station in this photo from Theme Park Review .

In 2008, Togo replaced two of the ride trains with similar shaped vehicles.  One slight modification was to the over the shoulder restraints and the other major change were to the ride logo on the front car.  It is now a lot more colorful.

The ride had one major modification around 2009/2010 when the brakes on the mid-course brake run were removed.

The ride opened in 1988 and according to Dick Kinzel (ex CEO of Cedar Fair and President of Cedar Point), hearing and seeing Bandit in 1988 was the driving force behind Magnum XL-200.  One major difference is that the choice was made to have lap bar restraints on Magnum versus the shoulder bars used on Bandit.  The term “Hyper Coaster” was created by Cedar Fair and in order to make Magnum special, the barrier of “200 feet” was used as the deciding factor if a ride was an hyper coaster or not.  Interestingly, if you convert 200 feet to meters like most of the world use, you have a meaningless height of 61 meters.

The author personal opinion on this is that after Bolliger & Mabillard, Morgan Manufacturing, Intamin and Togo showed that you can have a non-inverting steel coaster with impressive height and airtime moments; hyper coaster should refer to a style, not height.  The Goliath at La Ronde (Montreal, QC) is 170 feet tall and is as much a hyper coaster as Steel Force at Dorney Park (Allentown, PA) which is 200 feet tall. 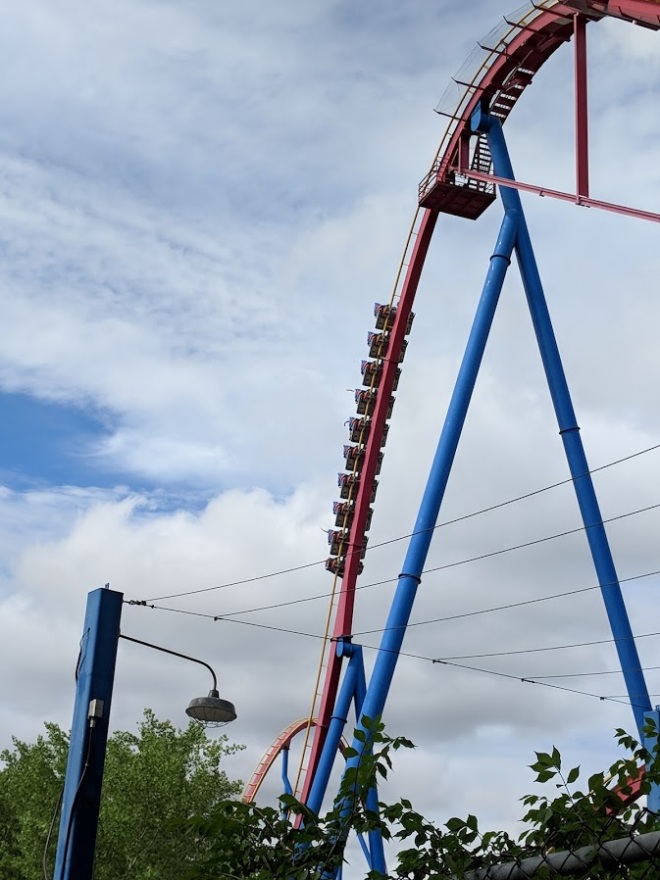 Goliath is a 170 feet tall Hyper Coaster from Bolliger & Mabillard.

The second hill on Steel Force, a 200 feet tall Hyper Coaster from Morgan Manufacturing.  The ride opened in 1997.