In 1996, Universal Studios Florida closed down one of their opening day attraction, the Ghostbusters Spooktacular.  The queue for that attraction started in the iconic firehouse from the Ghostbusters movie, and guests experienced a live-action stunt show where using Pepper’s ghost illusions, we saw the Ghostbusters take on ghosts.  Two versions were showed: in the first, it was a production tour of a set that went wrong and had a production assistant get caught up in the middle of a battle between the Ghostbusters and Gozer, the villain from the first movie.  In the second, we attended a business seminar hosted by Tully (from the 1984 film) about buying a Ghostbusters franchise.  A pre-show where Tully demonstrated some equipment was interrupted by Walter Peck, the inspector who caused the catastrophic events at the end of the original Ghostbusters movie.  The main show used the same set with a different storyline.  On November 9th, 1996, the attraction closed forever in preparation for its replacement. 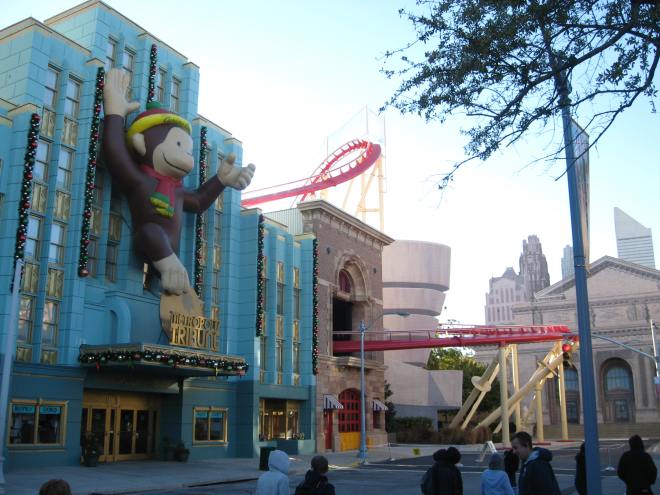 The old Ghostbusters entrance was located in the brick section, right under where you see the Rockit track coming out of the building.

Twister was a massive hit in 1996 where storm chasers chased after tornadoes to create a weather alert system.  The incredible visuals of the movie combined with the box office success made this a natural fit for an attraction.  Over in Hollywood, Backdraft had been thrilling guests for years as a special effect demonstration, and the attraction was not exported to the Florida park.  Backdraft was used as a basis for this attraction in a different setting and, with a new signature effect.  The new attraction opened on May 4th 1998.

Soundstage 15 exterior and queue line was weathered and covered in damage.  The queue line took guests through a damaged Wichita, Kansas.  Guests then entered the soundstage where Helen Hunt and Bill Paxton were shown on video in a brand new building extension filled with movie props; this open room added a preshow to the attraction.  They mentioned the challenges, and the issues they faced when filming the original movie.  Guests then moved on to the original Ghostbusters preshow room.  This looked entirely different as it was now a claustrophobic nightmarish room inside a house that had been destroyed by a tornado.  The theme of danger continues as on various TV’s placed inside the rubbles; another video plays highlighting more of the threats of tornados.  It is interrupted by a weather bulletin that advises us that another twister is heading our way and we need to find safe shelters.  Team members dressed in weather coveralls and light batons accentuate the chaos and emergency.

The main room where the old Ghostbusters show played is where the magic happen.  Universal Creative discovered a company called Cermak Peterka Petersen, Inc. (cpp.) The expertise of this company was in calculating the effect of wind on a structure as well as air quality.  As such, they have worked on buildings around the world and due to their unique knowledge, helped Universal Creative create the indoor tornado effect for Twister.  In this case, large fans are placed at three levels around the main theater, and they create a 35 mph windstorm inside the building.  As the building filled up with props, effects, and eventually people, the tornado effect would change and the programming adjusted.  For testing, 240 mannequins were placed, fully clothed, in the area guests would eventually occupy to account for that extra volume.  Thousands of gallons of water are used for the rain and other effects seen during the show.  One very particular thing that was discovered is that if the main exit doors are opened before or during a show, the 35 mph wind will tunnel right inside the gift shop, knocking things to the ground.  As a result of that, guests who want to exit before need to use a side door that won’t create a mini tornado inside the gift store.  To make the tornado visible to the human eye, Liquid Nitrogen is injected as well into the wind funnel.

The back of the main theater is a giant Imax screen, allowing the creators to show an outdoor movie theater screen that is destroyed by an approaching twister.  Three mechanical effects are used during the show to show items carried by the intense winds.  Dorothy, the weather testing machine, flies off the bed of a pick-up truck into the night.  A mannequin cow flies in front of us, paying homage to a classical scene of the movie.  Last, the Galaxy Drive-In theater sign is torn apart and flies into the garage.

The show starts with lightning striking a tree while a tornado siren ring.  It splits it open in a shower of sparks, and then we hear the wind pick up.  The impressive sound of the Tornado was created by capturing the sounds of lions, tigers, and camels, blending them all up in a scary cacophony.  In the background, the horror movie “The People under the stairs” play on the drive-in screen and we see various flashlights inside the buildings around us.  Once the approaching tornado rips through the screen, it appears in real life, in front of us. A power pole transformer sparks violently into the ground as the Rocket diner sign is destroyed.  The pick-up on the left is shaken quite badly as Dorothy flies into the sky.  The pick-up then smashes into a fire hydrant, spraying water all around.  The tornado moves around the stage, eventually causing the Galaxy theater marquee to fly out into a garage.  A cow is also thrown around in the air.  Throughout all that, various windows break as more sparks fly out of hidden electrical outlets that double as spark generators.

The corrugated steel roof above us shake severely, looking like it will also break off at any moment.  The show reaches its climax as the tornado rams the right pick-up truck into two gas pumps.  Gasoline spews out as sparks come out of a nearby steel drum.  This cause the water leading to the sewer grate to catch fire, imitating what we’d imagine is a gasoline trailing lighting up.   Once it reaches where we last saw the tornado, it causes a giant 30 feet tall explosion. Initially, the fireball was not as massive as we’d expect; later on, Universal upgraded the propane line and nozzles to make it an impressive ball of fire in front of us.  At the same time, the floor under us drops little, startling riders.

The attraction closed on November 2nd, 2015 and was replaced by Race Through New-York starring Jimmy Fallon.