Phantom Manor, as the Ravenswood Manor is now known, invites guests to visit it.  What could have happened at the Manor to cause this town to fall by the wayside?  Guests pass the rusting gates of the Ravenswood estate and start going up the hill, passing the garden, and hearing a haunting melody that evokes an eternal sadness. 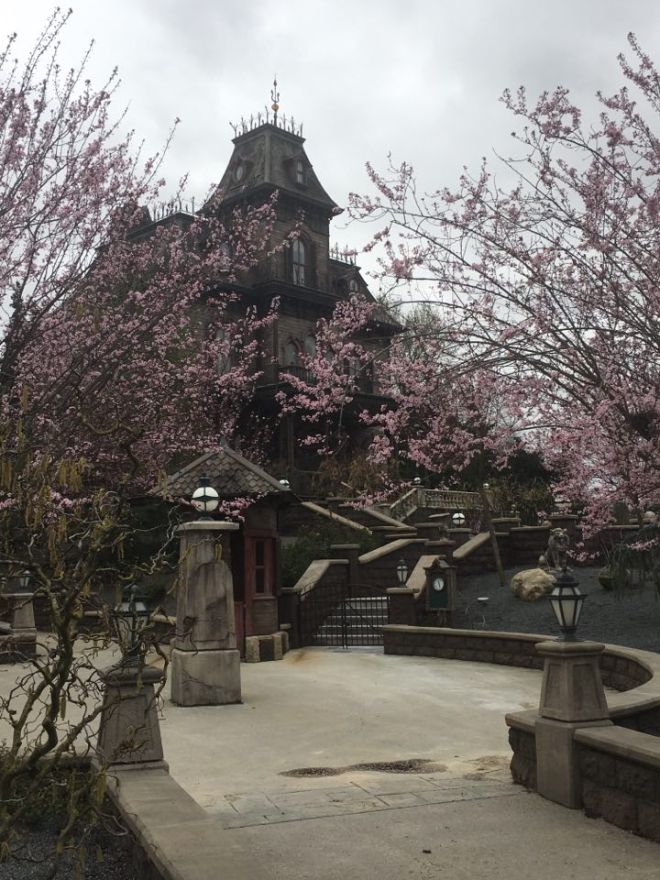 The gazebo, holding the musical box.

A covered pavilion around a fountain serves as a waiting line, leading guests toward the Manor and its front door.  From there, guests have a high point of view on Thunder Mesa and the Mill Landing section of Big Thunder Mountain.  Geysers off to the distance on the left can also be seen.  Interestingly, the right side of the house facing the geysers and the river bend is in much worst condition, exposed to the easterly winds. 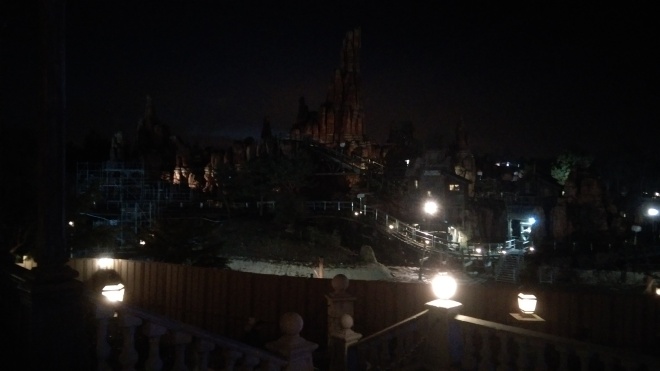 A look at Big Thunder Mountain at night from the balcony.

Entering Phantom Manor, guests stand in an elegant foyer, under the gaze of a portrait of Melanie Ravenswood, mistress of the house.  At this point, the narration starts. 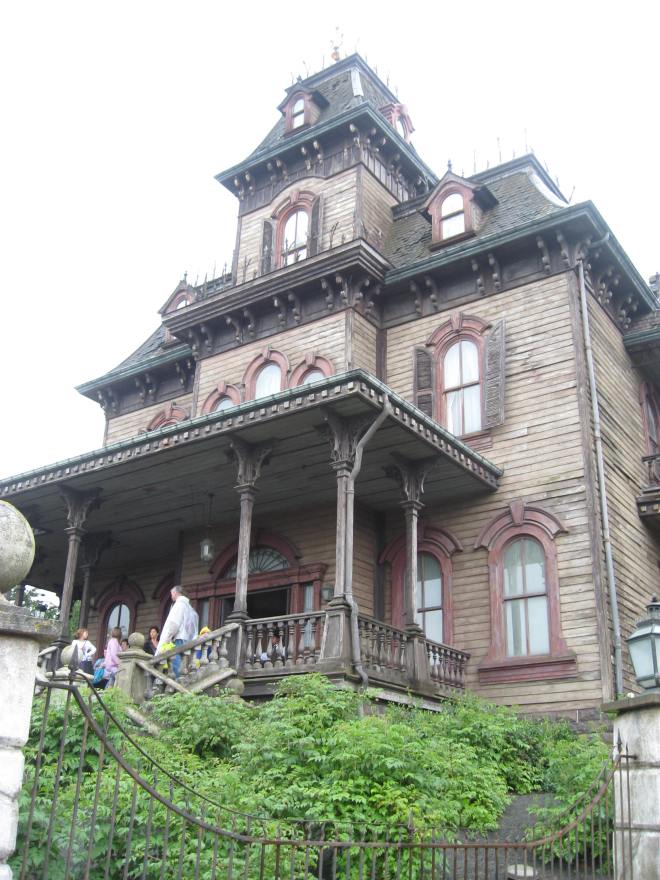 This is the 1992 French narration, translated to English by the author. The narrator who replaced Vincent Price original English narration was Gerard Chevalier, a famed French actor, and author who has an appropriately deep and intimidating voice.

The foyer of Phantom Manor, as narrated by the Phantom.

You, the ones who dared to disturb the serenity of this place. Will You have the courage to walk through the doors of this house?

Come on in, don’t keep us waiting, enter!  What are you waiting for?  Please don’t be so scared, step into the light so I can take a peek at you.

Dear friends, you have nothing to be scared of.  Come in; I have so many things to show you…

(Throughout the speech, you hear the plaintive cries of Melanie Ravenswood)

Phantom: Our visit begins here in this gallery, where you can gaze upon the sweetness and innocence of youth.  Alas, things are not always as they seem.  Do the walls of this room not appear to be stretching?  Also, there are no doors and no windows.  What a worrisome problem to solve: how to get out.  (Cackle)

The room is illuminated by gargoyles holding candles, all hanging around the room.  While the room is stretching and going down, the four portraits of Melanie stretch and reveal ghastly scenes where great perils are about to beset her.  In one, Melanie and the Groom are eating a picnic outside, about to besieged by countless ants and other critters.  The next one has Melanie standing in a river, about to get attacked by an alligator.  The next one show a skeleton digging itself out of a grave right in front of the rose bush she was standing behind.  The last one shows her in a canoe, about to go down a steep waterfall.

Phantom: I am quite scared to inform you that you will need to follow me… (more crazed laughing, as the Phantom now knows that you’re trapped.)

At this point, the room turns dark, and we hear the crazy laugh of the Phantom as lightning flashes above our head, illuminating the attic where a shadowy figure in a dark suit is seen holding a rope.  This rope is connected to a noose from which an unfortunate man is hanging from.

When the lights come back on, a door in the wall open, revealing a hallway.

Phantom: Oh, I’m sorry. I didn’t mean to frighten you.  Let’s continue the visit; there are so many more things to discover; keep your courage and stay together.  I would be sad to lose you… so soon.

Phantom: When passing by those priceless works of arts, perhaps you have a strange feeling?  Don’t be scared; this is only an optical illusion.  The real beauty of this house awaits us… further on.

Guests at this point hear the loud and sad singing of Melanie as they pass the transforming paintings.  A beautiful woman is turning into a snake-headed menacing monster, a grand sail ship turning into a derelict ghost ship, and a woman sitting on a couch converting into a cat lady are some of the portraits seen.

One of the bust that stares at you as you walk toward the Doom Buggies.

In front of us, a giant portrait of Melanie hangs, ready for her wedding.  As guests turn the corner, they have a look at the grand staircase of the Manor, in front of which an endless flow of Doom Buggies pass by and which we board.

The portrait of Melanie Ravenswood.

Doom Buggies is the appropriate nickname for the Omnimover ride system, invented in 1966-1967 for the Adventure Thru Inner Space dark ride at Disneyland.  An endless train of 2-3 person cars is linked together in a constant speed system, with the possibility of turning vehicles at the precise moment in the track so the designers can direct guests toward what they want to see.  For downhill sections, guests have flipped around, so they are on their back, letting gravity keep them safely in their seat. 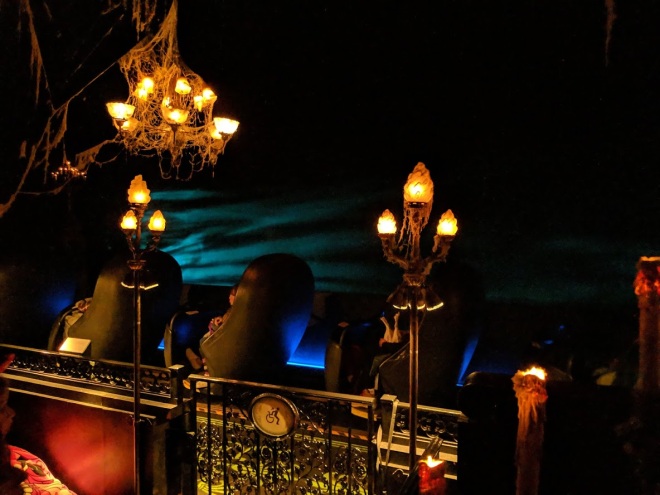 The Doombuggies and loading area at Haunted Mansion at Disneyland in California.

For Phantom Manor, the Doom Buggies don’t have any speakers inside as it was decided not to have the Phantom narrate to guests during the tour.  They were also simplified as the front part is fixed; instead, a standard lap bar is lowered by a cast member on guests to keep them inside the ride vehicle.

After going up an incline, the buggy turns to the right, directing us toward an alcove where we see Melanie.  She is in her wedding dress, panicking as she seems to search desperately for her groom.  It looks like she just left the altar too as she is holding her wedding bouquet and a candelabra to illuminate the way.

Next, we turn a corner and see an antique set of armor on the right.  A long hallway has a projection of Melanie with her candelabra running inside it, and we see something is very wrong as the wallpaper has turned from natural flowers to a scary pattern.  It appears to be that people are trapped inside rooms as we hear noises and see desperate attempts to escape their fate.  A ghostly pianist also plays a strange version of the traditional funeral march.

The walls seemingly disappear as the scary face patterned on the wallpaper come to life in a green hue as a clock grandfather clock strikes the 13th hour. We then enter the séance room, where among a raging storm, Madam Leota in her crystal ball talks about what is happening.  She mentions joining the spirits in nuptial doom: a ravishing bride… a vanishing groom.

The ballroom where the wedding ceremony takes place follows.  All the guests are now ghosts who appear and disappear as we see the Phantom walking in through a large window.  Melanie sees this and soon realizes what happened during this fateful night.  The ballroom is spectacular, with a large portrait of the Ravenswood Manor is happier days.  The music is very somber and not happy at all.  The ethereal organist knows something terrible happened.

After a brief passage in darkness, we arrive at Melanie’s Boudoir.  It is a moment of calm as it seems all is normal at first.  Unfortunately, the Bride, doomed to eternally wander the halls of her Phantom Manor, is seen crying at her console, having already aged immensely.  The Phantom is still tormenting her as the mirror of the console is now shaped like a skull and reflects one. 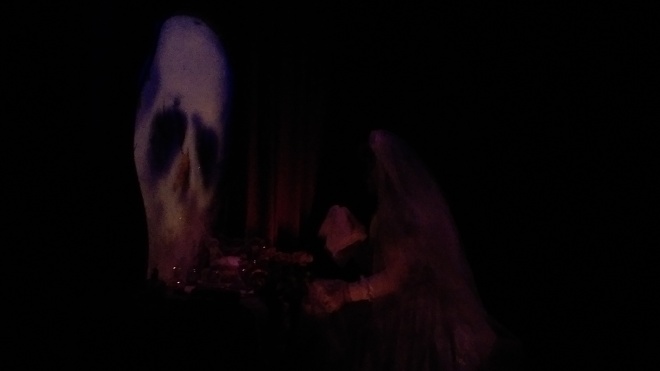 Melanie staring at the skull mirror.

Leaving the rotting estate, we arrive at a cemetery where the Phantom and his prized Hellhound are waiting for us.  Holding a shovel, he is laughing at our fate as we are also doomed to suffer eternal torments.  The cars at this point rotate, so we are backward as we head down, passing various broken coffins and skeletons of the residents of this terrifying graveyard.

At the bottom, we see the famous singing busts, who give us a lively rendition of Grim Grinning Ghosts from X Atencio and Buddy Baker. The Skeleton Dance, one of the earliest Disney Silly Symphony short is paid tribute as skeletons play a unique version of Grim Grinning Ghosts on bones.  We are now in the nightmare version of Thunder Mesa, called here Phantom Canyon.

We pass by an abandoned hearse with a hanging tree nearby.  Spirits are projected in front of it, and it is quite intense visually and auditory.  Arriving in Phantom Canyon proper, we see that an earthquake has ravaged the town.  We pass by the ghost train Depot on the right with its skeleton station chief.  On the left, we pass by City Hall, where the mayor greets us with its head.  Astute guests will recognize his voice like the one of the Ghost Host, host of the Haunted Mansion in Florida and California, voiced by Paul Frees.

In an homage to Western River Expedition, the shootout scene is recreated here using a ghostly sheriff shooting at a ghost bank robber.  The apothecary in his shop experiences a Jekyll and Hyde transformation as he drinks one of his mysterious potion’s.  A piano player plays a swing version of Grim Grinning Ghosts as another ghost lives in his piano as evidenced by the hand holding the candelabra.  The smiling Can-Can Dancer is still charming passerby, and the bartender is seen shining his glasses inside his saloon.  On the right, a gambling hall has a neat projection of a card game played by invisible ghosts.  We can only see the cards, drinks, and smoking as they seem to be playing five card poker, the common game depicted in comics and movies for western movies.  Is anyone cheating as they always seemed to do?  We can’t tell from our point of view.

Exiting Phantom Canyon, the enraged Phantom is now in a tattered version of his formerly grand suit.  He has an open gate, and as head back toward the Manor in the distance, Melanie appears to save us.  She is sadly now a skeleton wearing a tattered wedding dress, pointing the way out.

The last scene of the ride is the mirror gag.  Instead of silly hitchhiking ghosts sitting in our Doom Buggy, the Phantom lies on our doom buggy, shaking it.  After exiting the attraction, guests exit back to Boot Hill, passing by a small statue of Melanie, asking us to come back visit her.

Anaconda at @kingsdominionva opened in 1991 and we purchased in 1992 a cap that included this neck cover. @ridewithace @sands_sansei_media @rollercoastersalesguy @mark_scott_rose #legacyofarrow
Did you know Moonsault Scramble had two trains? Learn more about #moonsaultscramble , the record breaking roller coaster that #takabisha in the photo replaced. @fujiqhighland. @premierridesinc and @intaminofficial are also mentioned in this article.
https://parkvault.net/2021/02/21/the-american-eagle-soars-above-great-america-part-7-of-our-look-at-the-worlds-tallest-roller-coasters/
In our latest article about the world's tallest #rollercoaster , we look at #japan
We have just updated our first article about #riverrapids featuring @intaminofficial #thunderriver at @sixflags sadly missed #astroworld theme park in #houston . Thank you to Bev D. II Hartwood for the construction photos, one of which is shown here.
Who remembers the short lived Cinderellabration show that took place at the Magic Kingdom in 2005? It came from @tokyodisneyresort_official @waltdisneyworld @#magickingdom @disneyparksblog
Loading Comments...
Comment
×
%d bloggers like this: