On June 16th, 2016 at Shanghai Disneyland, Soaring Over The Horizon premiered.  Utilizing the familiar Erector Set ride system, brand new experience was shot with digital cameras and shown in two theaters located inside the Adventure Isle area of the park.  As it moved away from an airport or airplane hangar theme, a beautiful indoor waiting line with stars in the ceiling and temple constructed.  It is without surprise the most popular attraction in the park.

Soaring Above the Horizon at Shanghai Disneyland entrance

Soaring Above the Horizon entrance portal

The indoor waiting queue and theater buildings are cleverly hidden at Shanghai Disneyland.  The large mountain that houses the Roaring Rapids and Adventure Camp attractions hides most of it and looking at it from the exit, only the top part can be seen.  It was painted to blend in masterfully with the rest of the rock work. 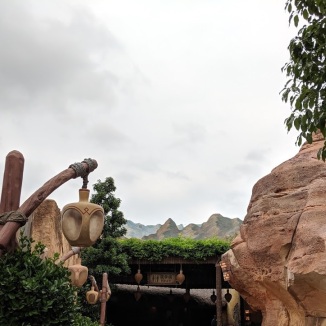 The only visible part of the show building is the painted mountain range above the middle.

Coaster Kings provided us with the photo of the night sky projected on the ceiling of the standby portion of the waiting line. 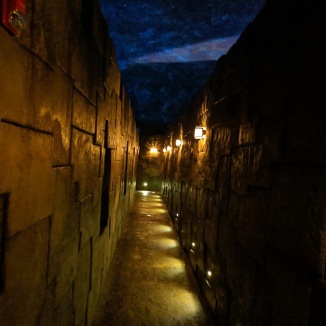 Fast Pass queue at Soaring Above the Horizon.

Standby Queue for Soaring Above the Horizons

Coaster Kings provided us with this great photo of the night sky projection on the ceiling of the main room of the standby queue. 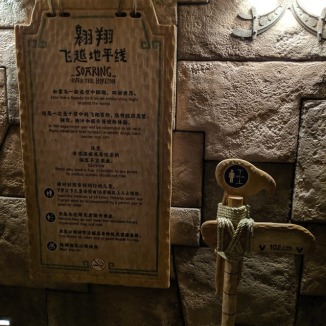 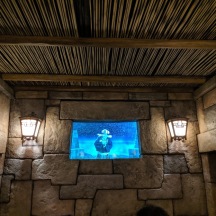 The preshow explaining the backstory and giving safety information. 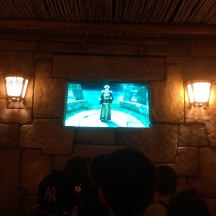 Soaring Above the Horizon ride vehicles.  You can see the corner of the screen on the left side, and here in Shanghai, a starfield is projected on it to simulate looking out of the temple at night.

On June 17th, 2016, both Soarin’ at Epcot and Soarin’ Over California debuted the new movie under the name “Soarin’ Around The World.”  At the same time in Epcot, Disney had built a third theater to adjust to the ride immense popularity.

Soarin Around the World sign inside The Land at Epcot.

Flex provided us with this picture of the waiting line.

The third theater leads to a new splitting area for guests at the merge of standby and fast pass. The new theater is Concourse C straight ahead.

The new movie now integrates various landmarks from the world with improved transitions and a lot more CGI effects.  You start by flying over the Matterhorn in Switzerland then make your way over Greenland, Sydney Harbor (Australia) and even a fly over the “Disney Castle” in Germany, Neuschwanstein Castle.  This is the castle that inspired Cinderella’s Castle at the Magic Kingdom and Tokyo Disneyland.  Kilimanjaro in Tanzania follows and you race along with various animals on the savannah.  A spectacular look at the Great Wall of China, the Great Pyramids in Egypt and the Taj Mahal in India take us over 3 of the world most recognizable landmarks.

The only scene in this film shot in the United States will look familiar to Disney World guests as they are the West and East Mitten Buttes in Monument Valley.  Those buttes were the main inspiration for the tall desert peaks of Big Thunder Mountain at the Magic Kingdom, Tokyo Disneyland, and Disneyland Paris.  A great look at the Lau Islands in Fiji provides a dream landscape of the Ocean, and this is followed by what appears to be an unstoppable set of rapids: Iguazu Falls in Argentina.  At first, they look like Niagara Falls in the film, but as you crest the edge, you see the incredible valley and all its waterfalls.

We transition to night and arrive over Paris, flying over the Trocadero and then coming at the side of the Eiffel Tower.  The finale differs depending on where you’re experiencing the attraction: in Shanghai, you fly over the financial district of Shanghai at night, at Disney’s California Adventure, over Disneyland, and at Epcot, over that park.  In all cases, fireworks go off, and Tinkerbell visits us to spray pixie dust over us.

Jumpsmokers Grill is the new name of the Taste Pilot Grill. 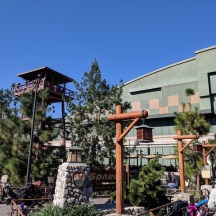 New look of the show building.

New appearance of the show building at Disney’s California Adventure.

Bruce Broughton, the composer of the new soundtrack drew heavy inspiration from Jerry Goldsmith legendary soundtrack to bring the audio aspect of the updated movie to life.

Soarin Around the World indoor queue at Disney’s California Adventure

The hallway leading toward one of the theater.