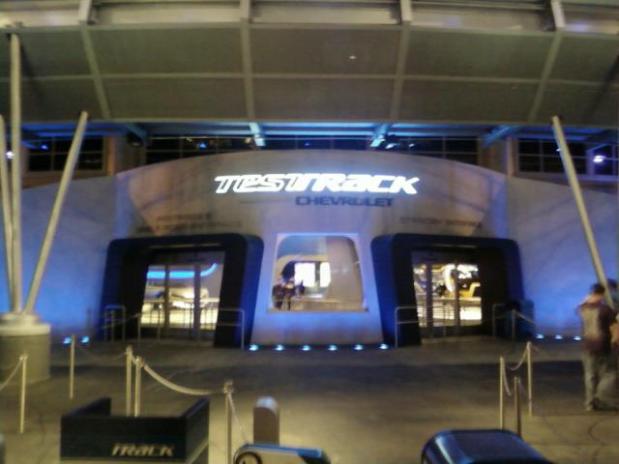 Around 2007-2008, a few of the Test Track ride vehicles were used for a test.  They were wrapped in a new blue color scheme, which was very reminiscent of the world of TRON, the cult favorite movie that premiered in 1980.  TRON created a rich environment where black, blue, and dark tones became their character.

In 2012, after General Motors renewed the sponsorship contract once again, Test Track closed for a significant transformation, this time branded solely around the Chevrolet brand.  After the 2008 financial crisis, a few General Motors brands shown on the in-car displays disappeared from the American market, so it made sense to concentrate on their stronger brand to GM.

The attraction went away from its realistic and loud presentation to one very reminiscent of the TRON Legacy environment, which was a major departure from before.  As a result, the queue was stripped of its test equipment and historic vehicles and went deeply into the “what if?” future of transportation using LED screens.  The entrance has new sliding doors and a rounded shape, leading guests to a large hall with many concept vehicles and a sleek, clean design.

The briefing room area was stripped down and turned into two rooms, now referred to as the Chevrolet Design Studio at Epcot. Guests use computers with touchscreens to design fantasy vehicles that were optimized for off-road, wind drag, fuel efficiency, and other factors.  They then uploaded their designs to  use either provided cards or their magic band (RFID wristbands used for park admission, hotel room access, Fast Pass Plus, payment, and other applications)

Guests then proceeded to the loading platform, where again, single riders are used to fill empty seats in the three across-ride cars from a separate line.  The colors use many tones of blue and silver, brightening up the area a lot. Even the narration was toned down to a quieter and calmer tone.

The experience was presented as the Sim Track, again continuing the theme first introduced in the waiting line and outside aesthetics.  The ride path is the same as before, except for removing the Belgian and german blocks on the first downhill section.  While the first version of Test Track had empty spaces, Test Track 2.0 tried to fill the large show building with lighted-up signs, neons, and more LED screens.

After the first uphill and descent section, guests start the formal test with capability. A screen shows heavy rain on the left and neon signs around the old S-curve element.  Next, our improvements are uploaded to our vehicle to drive around a left-hand curve carefully.  A lightning bolt effect is on the wall in front of the turn for added excitement.  Test results are shown on a screen, right next to a stunning neon city in the distance.

Efficiency takes place in the old environmental test rooms, using screens and narration, whereas before, it was more sensory and animatronic based.  Exiting the rooms, riders are sent careening around the hairpin curves previously known as Track Course A.  This is presented as the Responsiveness test, which adds Automated Driving Technology as the car drives along.

The old truck’s evasive manner is still present, now covered in neons, which tones down the scene more than before.  This is presented as Crash Avoidance Technology. The old Crash Test area is now filled with more screens, highlighting everything we had experienced so far and leading to the last test, power.

The Power test is the outside highspeed loop, which is now silent as there is no narration and the engine BGM sounds toned down.  This concludes Test Track 2.0 for the ride portion, with the old Factory Experience post-show removed and the old vehicle expo transformed into the Chevrolet Showroom.

One unfortunate side effect of the changes was removing many effects, like the rough terrain section mentioned above, the crashed cone, the environmental test chambers, and other things.

Test Track was the most popular attraction at Epcot for many years and was a major guest favorite.  Even with its technological challenges and intensive maintenance, the Slot Car dark ride was used on two other attractions: Journey to the Center of the Earth at Tokyo DisneySea (Urayasu, Japan) and Radiator Springs Racers at Disney California Adventure (Anaheim, California.)

Radiator Springs Racers uses similar ride vehicles as Test Track, this time built by long-term Walt Disney Imagineering (WDI) partner Dynamic Attractions.  While Dynamic Attractions under previous management ( AMEC steel structures) had not built Test Track, they were involved in the upgrades necessary for its 1999 opening. They were thus well placed to design a new version.

Radiator Springs Racers solved a lot of the issues by reducing the maximum speed of the vehicles from 65 mph (Test Track) to 40 mph (Radiator Springs Racers), further reduced during testing to 30-35 mph.  Even with the reduced speed, the high-speed section is still exciting, with more turns and dips along with its profile than on Test Track.

Journey to the Center of the Earth will feature in a future article regarding its use of fire and incredible onboard experience. However, we will still talk about how they evolved the Slot Car for this unique attraction.

Journey ride vehicles are a complete departure from Test Track and Racers’ low and sleek cars; much taller, narrower, and longer.  As a result, thanks to the added vertical space, they could move away from the solid wall small diameter wheels to go to massive truck-sized tires.  Those are much better at taking the extreme loads the attraction finale would place on it: a 50+ feet tall drop at a steep angle out of Mt. Prometheus.  The deep mining vehicles  reach 40 mph and give riders a second of negative-g along the crest and intense positive g-forces at the bottom.  Due to the more intense forces and higher rider position, Journey has a 46” minimal height restriction for riders and uses a solid lap bar per row to restrain riders. Passengers sit two across in 3 rows.  Both Test Track and Racers load four cars at once in the station, but Journey has three loading positions at load and unload guests at another platform before.

Dreaming of Tokyo Disney with Rara Monica Bin Spears...
Brand new theming at Disco Ronde at @larondesixflags
https://parkvault.net/2021/06/13/upgrades-and-new-colors-for-the-wildcat-the-third-part-of-the-story-of-how-frontier-city-adopted-a-roller-coaster-from-missouri/
We just received this exceptional book about Philippe Bourguignon, the man who helped revive Disneyland Paris in 1993. We are writing a text about the beginning of Disneyland Paris and this will be invaluable help.
https://parkvault.net/2021/06/08/a-wildcat-appears-in-the-backwoods-the-second-part-of-the-story-of-how-frontier-city-adopted-a-roller-coaster-from-missouri/
https://parkvault.net/2021/06/05/nine-lives-of-a-wildcat-the-first-part-of-the-story-of-how-frontier-city-adopted-a-roller-coaster-from-missouri/
Loading Comments...