Crazy Mouse opened in 1999 at Gulliver’s Milton Keynes.  The ride hardware used an L&T Mini Coaster 20×10 with the standard L&T Mexican mouse nose car.  The inside of the small building is themed:   oversized furniture as if we shrunk to the size of a mouse.  The layout is a simple figure 8, with the theming helping the experience a lot.

Vurang is an Intamin Indoor Coaster that opened in 1999 at Hopi Hari in Brazil.  It was an opening attraction for the park where inside of a pyramid, a large Intamin Coaster with two lifts was placed.  The custom layout includes a turn outside after the first lift hill.  An odd eye held by a lizard hand serves as the train front piece, leading 12 spinning cars. 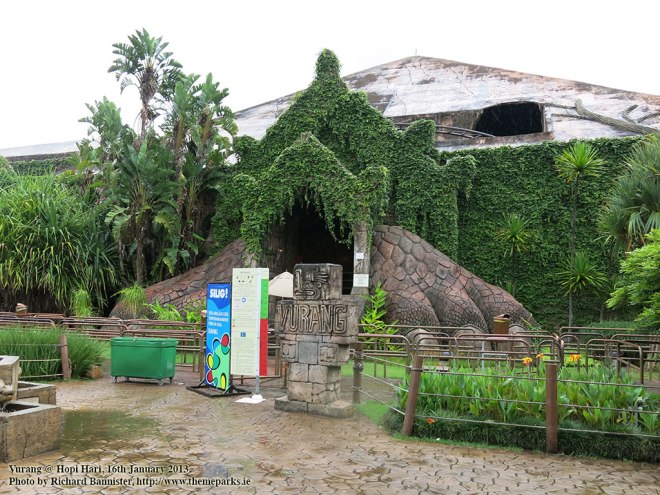 themeparks.ie provided us with this look at the pyramid of Vurang.

Connection between the cars to provide enough space to spin.

Kennywood (West Mifflin, PA) grandly celebrated its 100th anniversary.  The park always had dark rides, and this time, they went differently.  A warehouse was built in the outskirts of the park, behind the Pittsburg Plunge water ride.  The exterior of the warehouse was dressed like a classic Pittsburgh brick-walled factory, and through a tunnel in the front, guests enter the Exterminator. Initially, a Vermin Inc. van was parked outside, and this is a clue as to what is happening inside: giant rats overrun the factory.

Exterminator at the end of its alley in Lost Kennywood. 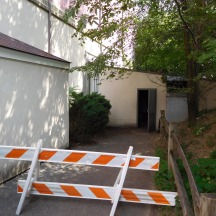 Themed alley near the warehouse.

Reverchon Inc. provided the ride hardware from France, and the cars look like mutant rats.  The themed waiting line looks like the control room of the factory, followed by the loading platform.  R&R Creative Amusement Designs created the storyline and dark ride,  Sally Corporation helped with the theming, manufacturing some show action equipment.

Top portion of a Reverchon Crazy Mouse at Greenland in Japan.

Station area of Spin Mouse at Greenland in Japan.

Sloped room inside the waiting line.

The ride starts with a long tunnel where there is an exterminator at the end.  Turning left, our rats engage the lift hill; near the top, an exterminator spot us, and we narrowly escape him.  Starting the 180° turn sequence, we narrowly a power transformer before heading into the boiler room.  The boiler room is a spectacular scene with a giant boiler in the center, and we see it from above and inside. Initially, a giant rat arm swiped down at riders at this point.

Next, the car drops down the most significant drop of the ride and rises into a sharp left turn.  The rat unlocks at this point and starts spinning intensely.  Spinning through more 180° curves, we see the boiler and enter it on the left before exiting it on the right.  The attraction concludes with an encounter with two more exterminators.

The experience is spectacular and remains very popular to this day.  It is a unique roller coaster-dark ride fusion that stayed in character for the park and complemented the existing roller coasters very well.

Nigloland is a popular theme park located in the Champagne-Ardennes area of France.  Looking for a signature roller coaster, they settled on a new version of the Mack sitdown coaster first seen on Eurosat at Europa Park (Rust, Germany.)  Housed in a unique slanted building in the rock n roll village,  Spatiale Experience entrance is inside a Space Travel Agency.  Guests then enter the building and soon reach the blue bathed station.  The ride computers are out on the unload side, serving as theming for the ride. Three trains are used, similar to the original ones of Eurosat. 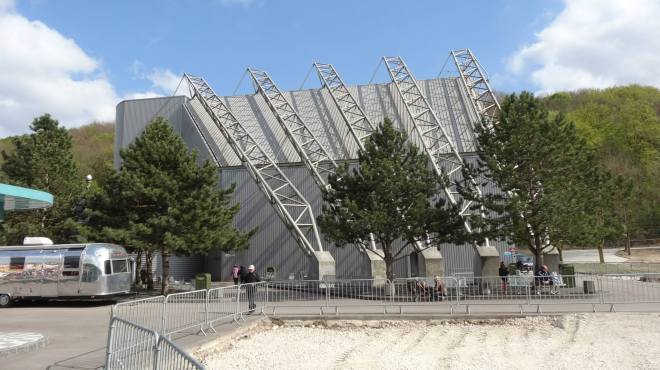 Flex provided us with this great overview of Spatial Experience.

Classic neon sign signaling the entrance of the ride.

When you enter the ride building.

The journey starts with the spiral lift hill, which the train engages first by half leaving the station.  At the right moment, the train moves forward a little and times itself with the batter mixer like lift hill.  A long climbing spiral takes the train to the top, on which we hear voices and a countdown near the top.  Hanging on the wall in front of us, we see planets, a satellite, and an astronaut.  A blinding flash blinds us as the music turns to beautiful classical music.

The ride loading station, with the ride computers used as decoration.

The train twists in the dark, around lighted signs and blacklight asteroids, which is a nice change from the usual empty soundstage enclosed usually have.  We see some flashes in the lower portion of the structure and when the space trip concludes, the music change to techno for the station.