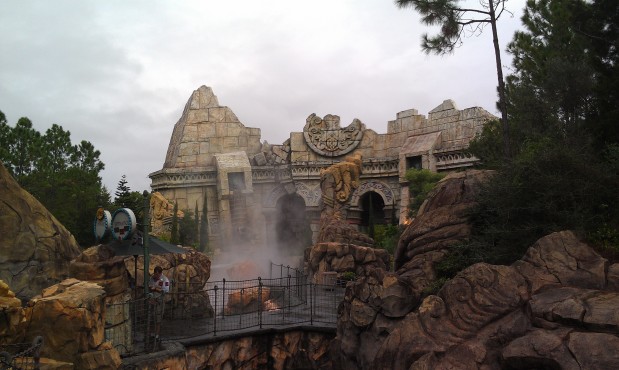 In addition to Spiderman burning things up in the Marvel version of New-York, fire was used in one other attraction, a show as well as scenery around the Islands of Adventure.  The attraction is Poseidon’s Fury, located in the Lost Continent.  The Lost Continent was where fantastic legends and stories came to life.  Divided into three areas when the park opened in 1999, Merlinwood was home to Merlin’s Tavern, Dueling Dragons roller coaster, and in 2000, Flying Unicorn.  Next, Sindbad’s Bazaar was home to a large marketplace with a blacksmith who creates medals and jewelry, Fire Eater Grill, who served Kebabs and the Eighth Voyage of Sindbad stunt show.  Last, the Lost City patterned after the lost city of Atlantis featuring Poseidon’s Fury and Mythos, one of the world’s top theme park restaurants.

Poseidon’s Fury is a special effect show featuring a live performer and expands on the concept of Backdraft and Twister: Ride it Out!.  Backdraft premiered in 1991 at Universal Studios Hollywood and Twister: Ride it Out! at Universal Studios Florida next door the previous year.  Poseidon’s Fury went beyond the concept of “here is how we do special effects” and created a fully immersive experience which pitted Poseidon, lord of the depths against Zeus, head of the Greek pantheon in ancient mythology.  Venturing inside a crumbling temple, guests wait in a dark waiting line until they have been ushered in large groups inside a mostly intact chamber.

A mysterious bearded figure crawled out of a passage near the ceiling.  He proceeded to explain that he is the Keeper and that Poseidon murdered everyone in his temple, which we are standing in.  In the second room, a talking statue is aided by laser projections to explain that Poseidon has been revived, and the only way to his chamber is through a secret passage.  A giant stone cartouche rolls out of the way, and we see a giant water vortex forming in front of us.  Water is pushed out at high speed using 40 manifolds and circles around a 40 feet long tunnel.  The result is spectacular and is the main attraction’s innovation.

Once inside the third chamber, we see the ruins of Poseidon’s Temple, with the water seemingly flowing in the distance.  The great appearance of the images projected is created by using water screens.  Thus, it looks like we’re underwater, and the water may rush in at any point.  We see mermaids at first, and things look calm… until Poseidon swims in and threatens to drown us and trap us inside his temple for eternity.  The Keeper is revealed as Zeus, the good-natured brother of Poseidon and our protector.  In the ensuing battle, Zeus uses elaborate fire effects while Poseidon uses water blasts to fight each other.  Zeus wins out, and he uses his magic to bring us back to the surface in a giant cloud of steam.  When the steam clears out, we’re back in the second chamber, looking at the stone cartouche.

This illusion is done by having walls mounted on high speed moving cylinders.  Using a strobe to blind the guests temporarily, the walls swing down and lock into place while the room is in darkness.  This illusion was first used in the reverse fashion, at Star Trek: The Experience in Las Vegas when guests teleported up onto the deck of the USS Enterprise.

The idea behind the show was good, but the story did not resonate with many guests. In an attempt to overhaul the show and bring it to its full potential, the show closed for a rewrite and light makeover in 2002.  Poseidon was moved to the role of the hero and a new character created for the antagonist.  Lord Darkenon was Poseidon’s high priest, and he turned his back on Poseidon in exchange for dark powers.  In a gigantic battle, both perished, or so we presumed.  Prof. Baxter, along with volunteers, has been researching the temple, of which only one chamber has been discovered.

We join the story as a new live actor replaces the Keeper, a volunteer played by either a man or woman called Taylor.  Taylor explains the story, and when the light goes out, use a blacklight to show a secret message to us.  After reading it out loud, Prof. Baxter explains through his radio that he just found an amazing discovery, but in a screaming fading message, asks us to leave immediately.  A mysterious voice comes on and tells us that we can find “our master” (the Professor) if we follow in his footsteps…

A secret passage opens behind us, and we enter the room with the stone cartouche.  The room is spookier with skeletons, cobwebs, and darker lighting.  It seems like Taylor released Darkenon from his prison when he read the hidden message, and he lured us into this chamber to dispose of us.  He screams that we need to either find a trident or perish in this tomb.  The secret passage closes up, and while Taylor is trying to find a way to pry it open, he happens to grab the Trident that Darkenon mentions.  At that moment, the Godden of the Temple appears above the stone cartouche and explains that while we are trapped inside this chamber, she can open the way toward Poseidon’s Chamber.

Laser projections return, leading to the dramatic opening of the cartouche and the dramatic reveal of the water vortex. Guests walk through the Vortex and arrive at the 3rd room, which is now in its walls down configuration, appearing to be a cleaner version of the second room.

We are seemingly trapped, leading Taylor to believe that all is lost.  Luckily, Poseidon’s voice resonates through the room, thanking us for bringing back his trident.  Darkenon interrupts, leading to a powerful strobe that temporarily blinds the guests.  While guests are in darkness, the walls retract, revealing the large ruined chamber.  Darkenon appears on the water screen, demanding the trident.  Taylor refuses, which makes Darkenon conjure fire, which blasts out of the water and rocks laying around.  Our guide notices a statue of Poseidon in the top left corner and make his way toward it, dodging fireballs along the way.

This sequence is the biggest difference between the old and new version, because the live actor is in the “hot zone” for longer than before, adding an element of danger to the climax of the attraction.  After returning the Trident to its rightful place, Taylor waves at us and disappears into the shadow.  The statue sinks into the ground in a cloud of smoke, leading to the return of Poseidon on the screen.

Darkenon taunts him, then goes directly after us, with the water bubbling next to our platform.  The water catches fires, but before it engulfs us, Poseidon saves us with a well-timed water blast. They continue the battle with fire and water, leading to a dramatic clash on the center water-screen.  They fight with weapons, leading to Poseidon’s victory and the end of Darkenon.

Poseidon proudly boasts that it is done, while on the screens, his underwater temple starts repairing itself.  He proclaims that we are under his protection, and in a final explosion of fire and water, the room goes dark while the walls drop down, restoring the room to its serene and calm condition.  On the way out, we see Taylor who thanks us, and we hear Professor’s Baxter who’s also returned to the surface.

Congratulations to #tokyodisneysea for winning the 2022 #applauseawards from @lisebergab !
Listening to @abigail_posner keynote address at #iaapa .
Late night visit to Busch Gardens to wrestle with a crocodile!
Time to break the ice at SeaWorld Orlando ! Premier Rides
Goodbye Splash Mountain, you had a great run!
I got I ran from A flock of Seagulls as the song!
Loading Comments...