With the opening of Universal Islands of Adventure in 1999 and its three thrill rides, Walt Disney World in Florida wanted to open a thrilling roller coaster of their own to its ride portfolio.  The Magic Kingdom already had two colossal roller coaster along with a flume that features a 50 feet plunge.  Epcot was about to open the long-awaited Test Track, and the Animal Kingdom which had just opened featured the turbulent and scary Countdown to Extinction motion base dark ride.   This left the Disney-MGM Studios theme park as the ideal candidate for a new thrill ride.

The Disney-MGM Studios featured at that time the incredible Twilight Zone Tower of Terror freefall experience along with Star Tours, so it was already starting to gain a reputation as the place for thrills at Walt Disney World.  Disney had opened earlier in the decade two looping roller coasters at Disneyland Paris (Chessy, France) and the world’s longest looping roller coaster was planned for Disney’s California Adventure (Anaheim, California.)  Based on previous experience and available land, a production model that fits all the needs of Walt Disney Imagineering selected from Vekoma.  The LSM Coaster, so called because it uses a unique Linear Synchronous Motors (LSM) launch system with a catch car feature 3403 feet of track with three inversions and a very compact layout.  This was the crucial part as it allowed Disney to construct it indoor and thus have full control over the visual and auditory show.

Whereas the standard model features two trains with one station that does both loading and unloading of guests, Rock n Roller Coaster configuration was modified to add an unload station to the pre-station waiting brake, extending the transfer track section, and add capacity to stop two trains at the end of the ride.  Two flat areas that had been left open during the ride equipped with brakes and trains can be stopped.  In total, the ride was delivered with six custom trains.  Five of which are present at the ride with the sixth in annual maintenance and refurbishment.  Four can run at the same time in normal operation. 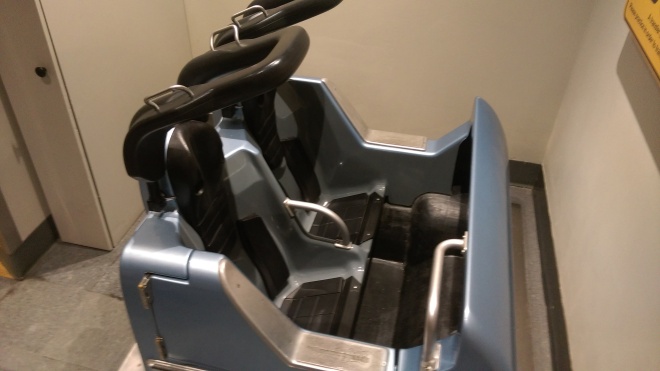 In the backstage area between both stations, this test seat is present for riders to try and to practice if they feel they will have challenges boarding the ride.

The trains were custom made and look like extended Cadillac limousines, complete with fins on the back car.  This also serves a practical purpose as it houses the necessary equipment for the onboard audio. The third row has a special door that can open so that guests who have challenges boarding the ride can do so more easily.  Five soundtracks identifiable by the train license plate can play.  When a train goes into refurbishment, the returning train gets its license plate and the appropriate music transferred to it.

The ride was placed to the left of the Twilight Zone Tower of Terror with a new street leading to it.  At the corner of Sunset Boulevard, right before the hill that house the infamous Hollywood Tower Hotel, you can turn left onto Gower Street.  Gower Street leads to the spectacular courtyard where G-Force Records is famously turning the music industry upside down.  This was a difficult transition to accomplish as Sunset Boulevard is set in the 1930s while the G-Force Records building refers to no particular era or period.  A grand portal leads to the courtyard, and you can see an upside down convertible car attached to what appears to be roller coaster track. 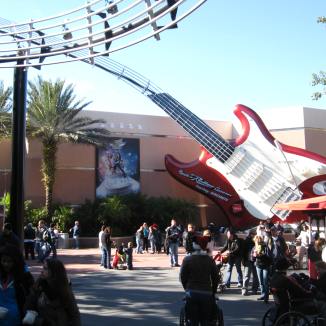 The courtyard of G-Force Records.

The upside down car at the entrance of the courtyard.

A giant red guitar advertising the ride is placed in front of the building and is nicknamed the StratoCoaster.  Vekoma bent steel in a way similar to their MK-1200 looping coaster track, and this track runs from the StratoCoaster to the entrance portal.  Various spotlights are attached to it.  One little known aspect of the courtyard is the lack of benches.  Instead, the walls around were designed to end at the perfect height to sit on them.  This little design feature gives a clean and open look to the courtyard and makes it very convivial.  When the ride opened, an impressive playlist of over 1000 rock songs was selected and played in the courtyard.   This was done so that guests would never hear the same song twice during their visit.  It was changed later and replaced by a pure Aerosmith playlist.

Entering the queue, guests initially queued up in a covered area before making their way up to a ramp to the main doors of G-Force Records.  A small queue line was located there, and guests could take a look at the impressive memorabilia behind glass.  Signed gold records, autographed guitars, and famous concert posters gave the feeling of a rock a music museum.  When guests reached the end of the line, they were assigned to one of two holding spaces right before the doors to Studio C.  Studio A and B doors were visible in line and if guests listened to the doors, they would hear the music being recorded inside.

Studio C is where Aerosmith is finishing recording a song, and this is the ride preshow.  The band greets us when the band manager interrupts the proceedings and tells them they need to make it to the show.  Joe Perry asks “Chris” to grab his black Les Paul guitar.  Originally, a cast member would go into the recording studio, grab the guitar case, and carry it backstage.  The video was edited to add an intern telling him he would grab it if no cast member were available to take the guitar, which was often the case after the initial ride hype.  Per the script, the cast member monitoring the room is supposed to ask the band for a backstage pass.  Steven Tyler would tell the manager that he like the idea and ask her to give us backstage passes.  Steven Tyler would do what can be viewed as an inappropriate hand gesture that was edited out of the preshow later.

The manager would then call the limo service and ask to make it a “super stretch.”  She would later tell us that it’s out in the alley as the band leave in their limo and leave the manager stranded there.  She would call for a taxi as she would walk out of the studio and the doors closed behind her.

The next room is where the ride greatest design feat is located: the loading area.  Made to look like a dark nighttime alley, guests are kept away from the launch area by a chain link fence, and we can see a night club, the Down Under Bar that sounds quite lively as music plays through the door.  Guests then make their way to the amazing Lock n Roll parking garage, and this is where the Super Stretch limousines park to take us to the venue.  Small touches are hidden everywhere, such as a sign advising the garage is not responsible for damage due to having much more speaker power than anyone would ever need.  The operator console is placed in the parking attendant booth and consoles hidden in toll boxes.  Cast members wear at this point Lock n Roll Parking vests over their musical note dress shirts. 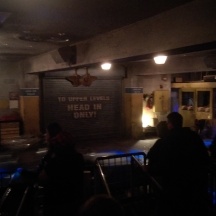 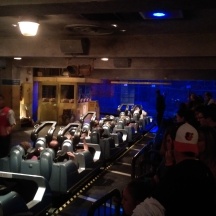 The operator booth is the parking booth at the top left.

After boarding the limousine and lowering their shoulder harnesses, the limo leaves the garage and proceeds to the freeway tunnel.  The radio comes to life as Uncle Joe Benson, a famous Los Angeles Rock DJ informs us that roads to the concert are all jammed, but he has the show covered.  In a small touch, some limousine soundtracks include a shout out to the riders from Steven Tyler when the music formally starts when the train is cleared to launch.

A traffic information sign is above the entrance to the tunnel, and it shows silly puns, such as “Traffic bugs you? Then step on it!” and other traffic jokes.  Just like the music changes when the launch authorization is given from the parking booth;  the sign change to a formal safety warning to keep our head against the headrest when the limo is cleared to drive away.

The launch is quite intense as the train accelerates from 0 to 58 mph in 2.8 seconds.  At the end of the tunnel, painted strips illuminated in black light like the sets on this ride give an even faster sense of speed.  The train is flipped upside twice in the spectacular Roll Over double inversion.  Painted Hollywood spotlights surround us as we exit the Roll Over and go through the second element, a high banked curve.  After the curve, the train dives in the middle of the O of the famous Hollywood sign and goes by various cartoon versions of Los Angeles landmarks.

Reaching the first braking area, we see a highway sign saying “Civic Center” on the five freeway.  We take that exit, and the next symbol is one of the famous 5 Highway that goes by Disneyland in California.  Going by more buildings, we take the exit for Beverly Hills before a unique traffic sign show a Corkscrew.  The Limo is flipped upside down in what could be called the Beverly Hills Corkscrew as palm trees surround us.  Throughout the ride, if you look down to the ground in spots, you can see a pretty city scape similar to the one on Peter Pan’s Flight in the London scene.

The second brake run advises us to be careful about opposing traffic, and we are now on the 101 Freeway.  The train goes through a donut sign before reaching VIP parking and jumping above the launch section.  Depending on timing, you may see and hear another Limousine screaming by under you at this point.  The ride then concludes with the braking run and the unload station.  This station is designed like a tent covered backstage entrance, and we see images of Aerosmith playing a concert on TV’s after.  Guests then exit the ride through the Rock This Way souvenir shop. 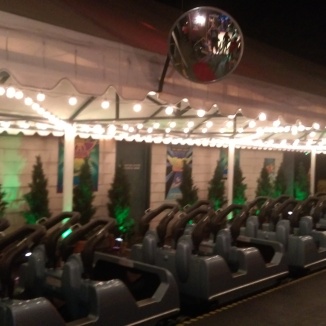 Back of the Limousine in the unload area.

In 2000 after Fast Pass was introduced at the resort, the exterior waiting queue was reconfigured to add Fast Pass distribution machines and a new access path.  Merge between Stand-by and Fast Pass lines was done at the bottom of the ramp leading to the Studio.

One small update was changing the radio DJ from Uncle Joe Benson to Bill St. James at the start of the ride.

In 2007, the ride closed and the waiting lines had another upgrade.  The patio was widened, and the standby queue now goes all the way inside.  Where the small queueing area was inside, a new set of doors built, and the area turned into a waiting area.  This is now the new merge point, and the preshow area consolidated into one waiting space.  A smaller waiting space is used for Single Riders who then have a different path to the station after watching Aerosmith in Studio C.