In an area near the main entrance, Busch Gardens Williamsburg started construction in 1994 on a brand new water ride.  It opened in 1995 as “Escape from Pompeii” and the story here is that we are in the 1920’s visiting ruins from Pompeii.  Pompeii was a city in what is today the Naples region in Italy that was destroyed in 79 AD after the nearby Vesuvius volcano erupted.  It buried the town under feet of ashes, and recent work has shown that most of the victims passed away due to the intense heat generated by Hot Surges. 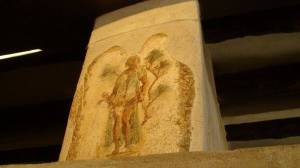 Jesseny Badillo provided us with those amazing shots of the real Pompeii in Italy and it’s surrounding ruins.

In the attraction, a section of ruins was just excavated, and boat tours are offered to visit what appears to be a Roman temple.  Intamin provided part of the ride system, in the shape of the boats, lift system and drop.  The boats were modified to have lap bars to prevent guests from getting out of the boat in the show building.  The park sourced themselves a traditional water dark ride propulsion system for the show building segment and then installed an array of various effects around it.  Birket Engineering was brought in to program the ride and install one of their proprietary control systems to tie it all together.

Flex provided us with this great shot of the entrance sign.

An overview of the show building and drop.

After the initial 50 feet ascend, the boat plunge into the water as a sign warns that the ruins we are in are experiencing tremors.  We enter the massive show building, and as a significant departure from the common Intamin Spillwater attractions, the indoor portion uses a submerged building dark ride system where water pumps propel the boat along.

The first scene features scaffoldings suggesting that a dig is taking place; to illustrate the tremors as mentioned earlier, timbers on rope break away from the ceiling, indicating the ruins will collapse.  The next room is the largest and at first, is eerily quiet…. Until a statue explodes!  This loud explosion on the left sets off the next series of event where the water on the right catch fire, causing another bust to explode.  The initial blast is repeated and then, as we exit the large room, fire race from the floor toward the ceiling above us.  Another example of the fantastic Brain Fire effect seen before on Backdraft and other attractions is next.  What follows is a incredible piece of show action equipment: a collapsing statue that falls right above our head. 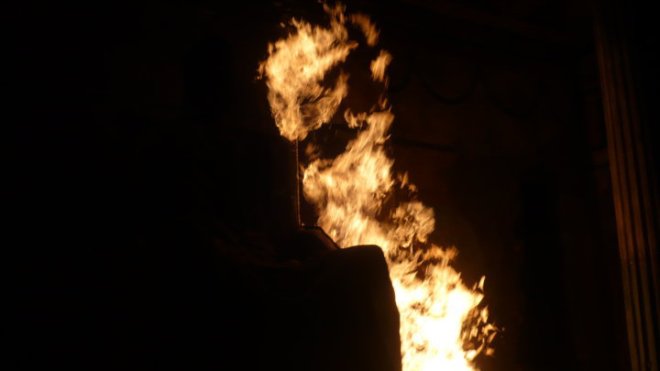 Our friend Flex provided us with this picture of one of the many fire effects.

The last indoor room is a mist filled hallway that curves toward the front of the show building.  The boat is lifted out of the water and plunges to the pool below, allowing us to escape the fiery inferno of Pompeii. 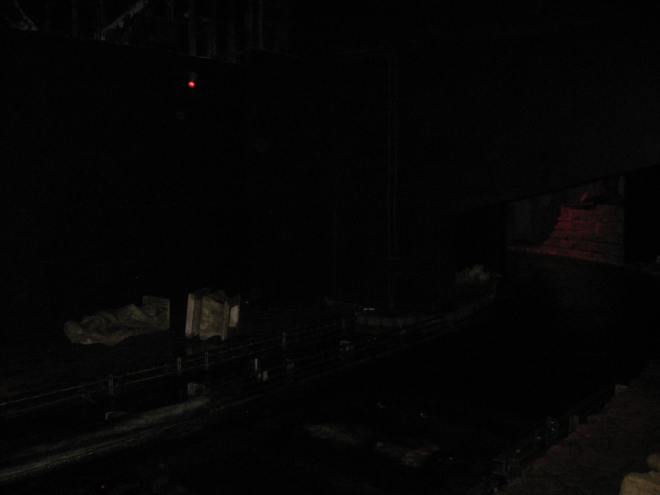 During a backstage tour, Park Vault was able to visit Escape from Building and capture this show of the final room.

Four boats are usually in operation as that is the optimal number for the ride system.  For safety, two team members are placed in the show building during operating hours.  The first is in the large fire room in a climate control tower.  That employee has the boat in front of them, making sure everyone is sitting and not reaching out. Once it is determined everyone is okay, two large buttons are pushed, and the fire sequence starts.  The second ride operator sits next to the drop door and looks out at both the final room and the drop.  Natural gas is used to feed the large fire effects in the attraction. 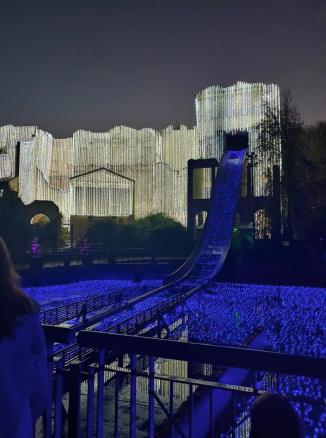 During Christmas Town at Busch Gardens Williamsburg, the water is drained out of the pool and thousands of beautiful lights illuminate the area.  During the Hallow-o-Scream Halloween event, the bottom of the show building house a haunt, making this a very important attraction in the park for it’s seasonal uses.  Kelli Mourer provided us with those pictures.

In 1996, using a different ride system from Intamin AG, Bermuda Triangle was part of the opening day line-up at Warner Bros. Movie World (Bottrop, Germany). Even though the park lost the Warner license in 2004 and is now known as Movie Park Germany, being a generic theme, Bermuda Triangle is still open. The original Bermuda Triangle closed in 2010 in Australia and was replaced by the Storm Coaster. The Storm Coaster is a Mack water coaster that features short dark ride segments before and after the coaster sequence. 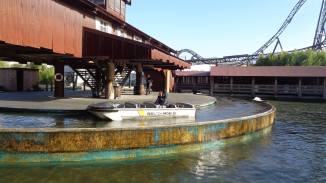 The first roller coaster to use real fire was the opening day headliner attraction of the new Warner Bros. Movie World.  Lethal Weapon Pursuit took its inspiration from the action-packed trademark car pursuits of the popular film Serie. The premise for this attraction started with a pre-show, where we are shown an incredible car chase that ended in a gigantic crash. Leaving the theater, we passed by the remnants of the collision and then entered the police carpool. Awaiting us were roller coaster trains, shaped like police cars, complete with windshields. This ride system was first used on the Indiana Jones Et le Temple du Peril roller coaster at Disneyland Paris. Designed by Intamin and built by Giovanola, this compact looping coaster track system allows tight turns, small inversions and use two cars trains to navigate the twisted layouts.

After Six Flags sold the park to Star Parks in 2004, the entrance sign was replaced by this one.  You enter the attraction by going inside the Kino theater.  We would like to thank Theme Park Review for providing us with those very rare pictures of the attraction. www.themeparkreview.com 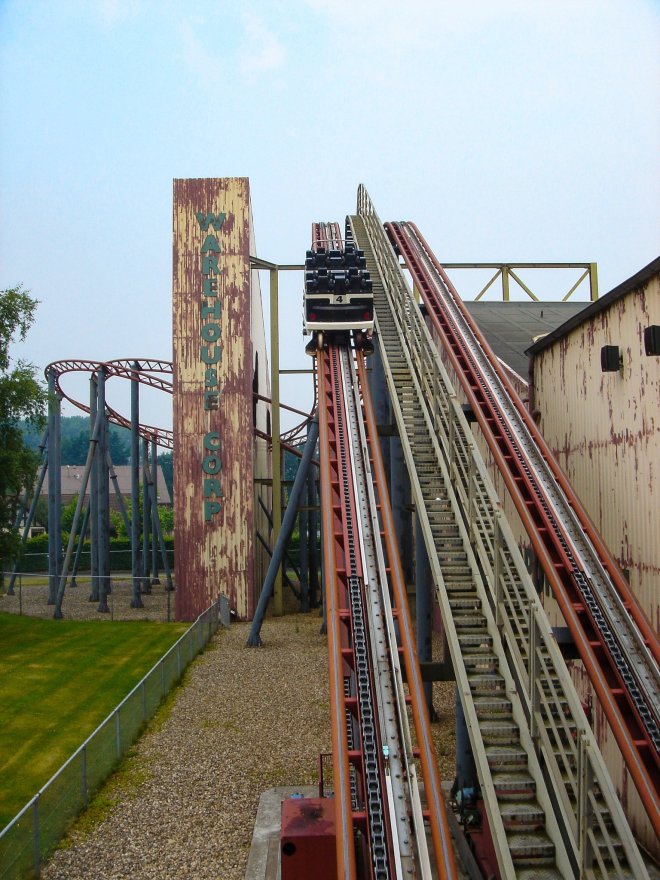 The first pair of lifts hills.  We would like to thank Theme Park Review for providing us with those very rare pictures of the attraction. www.themeparkreview.com

In the case of the Lethal Weapon Pursuit, it was a double track dueling coaster configuration that weaved in and out of rusting warehouses. After the first lift and a few dips and turns in and out, the cars entered the central warehouse that was plunged in darkness. We entered an elevator shaft where our cars would go up in a small vertical loop while only lighted with a strobe light. After the loop, we rise and then turn into a second smaller lift hill. After the lift, we drop to the right and then reenter the warehouse, heading toward the Car in Pound area. We went over a small dip over wrecked cars and then passed under a large fireball before the final surprise: a heartline roll. The cars then went back to the carpool area. 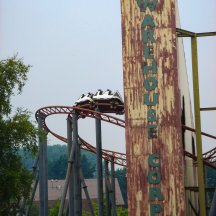 The police cars diving in and out of the warehouses.  Theme Park Review provided us with those very rare pictures of the attraction. www.themeparkreview.com 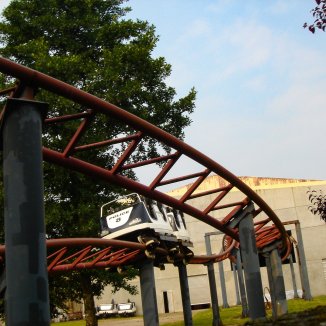 When Theme Park Review visited the park in 2005, they were allowed to film on-ride by the park; they provided us with this very unique screen capture of the police car about to go upside-down in the heartline roll.  The fireball effect was located in the warehouse just before this amazing maneuver.  www.themeparkreview.com

Historically, from a roller coaster point of view, this ride is even more important than just the Fire effect.  Lethal Weapon Pursuit/Cop Car Chase was the first successful heartline roll maneuver on a roller coaster that did not require the track to be wrapped up in steel.  It opened up the possibilities of even more imaginative layouts, and it’s influence is still felt today.

The ride was imaginative and fun, but when Premier Parks (who purchased Six Flags in 1998 and then changed their name to Six Flags) bought the park in late 1999, the fireball ending of the ride was deactivated. Also, the racing feature was mostly lost, as the park only operated one track most of the time. When the park lost the Warner license, the ride got renamed to the generic “Cop Car Chase” and closed for good in 2006.

Update: an helpful reader contacted and gave us an explanation toward the fireball effect on Lethal Weapon Pursuit.  Turns out the effect was even more advanced than what we lead to believe as it consisted of the following: