Since Gerstlauer unleashed the first Eurofighter roller coaster in 2003, there has been a constant race to achieve the world record of the steepest roller coaster in the world.  How did it start and where?  That is what we will take a look at in this article.

Amazingly, steep roller coasters are not a recent thing, but dramatic improvements in technology and track fabrication has allowed roller coasters to go steeper in shorter of a distance than what was previously possible.  The first world record holder with a confirmed statistic than we discovered was the world-renowned Coney Island Cyclone.  Located in Brooklyn, NY, this steel structure wooden roller coaster opened in 1927 and featured a 58.7-degree angle of descent on its first drop.  Riders in the back seat were treated to an incredible “I just fell off a cliff!” dropping sensation as they went down the first drop and a slight curve to the right at the top accentuates that feeling.  It was made even more incredible by the fact it still runs the original trains, consisting of 3 large four-row cars that need to flex and bend around curves and drops.  In 2013, Great Coaster International was selected to carefully do track and structure maintenance on the ride over four to five years.

The 58.7 degrees drop on the Coney Island Cyclone. 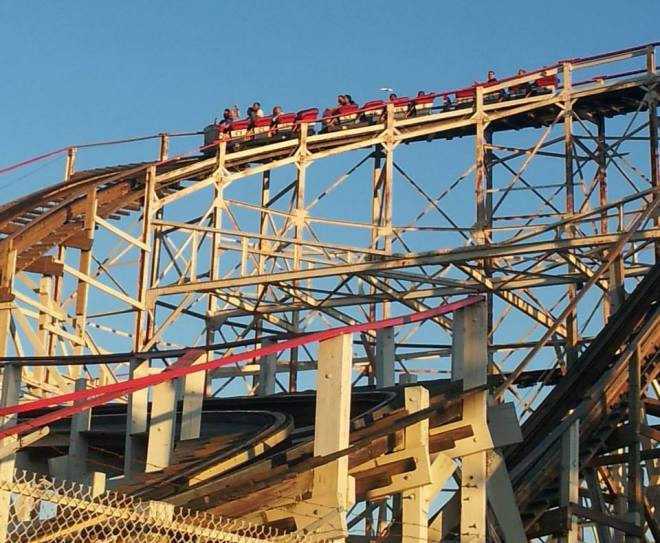 The train with the long cars of the Coney Island Cyclone.

The same year that Cyclone opened, legendary roller coaster designer Harry Traver unleashed his terrifying trio: The Crystal Beach “Cyclone” in Canada, Revere Beach “Lightning” near Boston, MA and the Palisades Park “Cyclone” in New Jersey.  Those three rides use a steel structure to support the world’s most extreme coaster track anyone had ever seen.  Straight track was not included and the ride consisted of a series of twisting drops, sharp curves and as a signature, an impossibly tight spiral.  The inclusion on this list is regarding the second drop on those rides: a video of the actual Cyclone at Crystal Beach show what appears to be a vertical drop coming off the rising S curve after the first drop.  We have no ways of measuring the angle, but we judge it to be among the steepest drop ever designed on a wooden roller coaster.  That trio of attractions did not last long and the last of those closed in 1946 at Crystal Beach, replaced by a different style of a wooden roller coaster that used part of the structure.

The Comet at the Great Escape in Queensbury, NY.  After Crystal Beach closed down, the Comet which was built using part of the Cyclone structure was purchased at auction by Charles Wood, owner of Great Escape.

After that, the Puyallup Fair in Washington State, now known as the Washington State Fair, wanted to raise the ante with its side-friction Roller Coaster.  Opening in 1935, it was quite a sedate ride since Side-Friction rides don’t have upstop wheels to keep the cars locked to the track in moments of negative forces.  So, in 1950, LeRoy Walker was hired to come in and renovate the Roller Coaster with the now standard wooden roller coaster track that includes 6 to 8 ply of wood with two wider boards to accommodate upstop wheels.  A yellow Prior & Church articulated train was sourced from a closed park in Vancouver, BC and two more trains were fabricated based on that one.  The articulated trains were able to take tight turns and steeper drops, so a 63 degrees drop was incorporated into the attraction, giving it an excellent world record that would last until 1984 for all kinds of coasters and 2006 for wooden roller coasters.

The angle of descent is a pretty visual world record, but how it is used make all the difference for what riders will experience.  William Cobb was known for incorporating psychology in his rides and throw tricks at riders.  The Texas Cyclone opened in 1976 at Astroworld in Houston, TX and was initially a more substantial mirror image of the original Coney Island Cyclone after plans to purchase that ride fell through.  William Cobb carefully studied the original layout and decided to throw a few different twists at it. For example, the first curve was not as steep as the original, 53 degrees, but the curve to the left was much more pronounced and the angle at the top a lot sharper, causing riders to get thrown into the lap bar.  The same thing was incorporated into the Riverside Cyclone (Agawam, MA) in 1983 where in addition to the insane drop, a Traver like rising turn to the right was integrated, leading to yet another impossibly steep drop.  Alas, both of those Cyclones were modified over the year to make them smoother for a new audience, and by the time they closed in 2005 and 2014 respectively, the rides were not the same as when they opened. 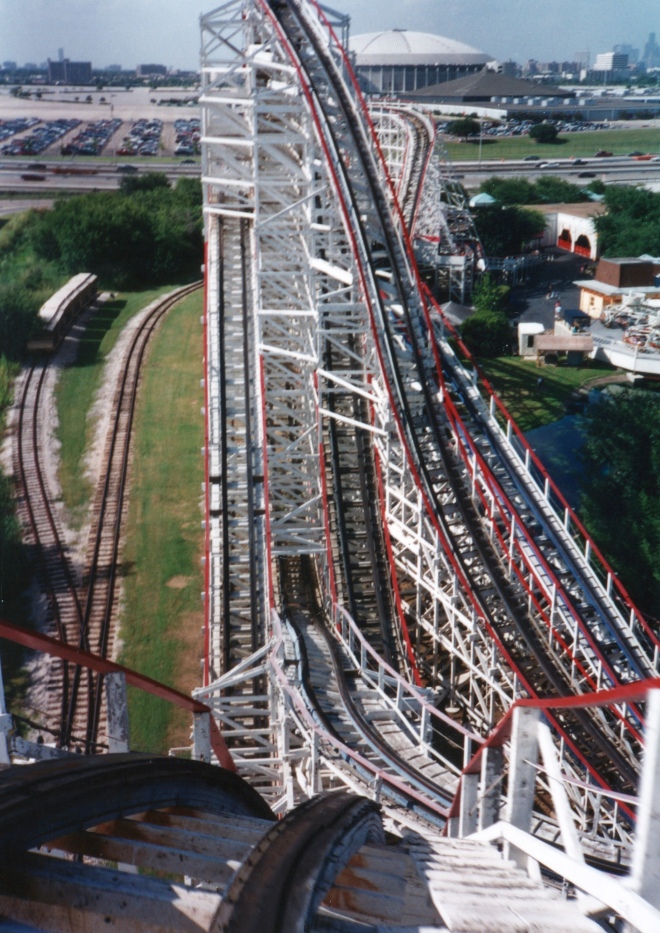 A view from the top of Texas Cyclone.

Ello Coaster provided us with those pictures of the Texas Cyclone.  In this photo, the ride was running its Morgan cars and some modifications to the ride had started.

Due to the ride profile, the park changed the original cars for new fiberglass cars from Morgan Manufacturing with large headrests.

Our friend Flex shot this picture of the Cyclone at Six Flags New England after its 2001 modifications.  In 2001, Six Flags New England (the renamed Riverside) raised the bottom of the first drop and constructed a new rising turn, reducing the intensity of the ride.  The current track can be seen in the middle of the structure.  The old profile was painted white and is under the current track.

Things got dramatically steeper in 1977 when Schwarzkopf unveiled the Shuttle Loop, a launch roller coaster where the train goes both forward and backward.  To minimize the footprint of the attraction, two 70 degrees spike with rubber covered metal plungers at the end was designed and incorporated at each end of the attraction.  Shuttle roller coasters are not considered in world records since the whole train does not reach the maximum angle so that we will treat it as an entirely different category. 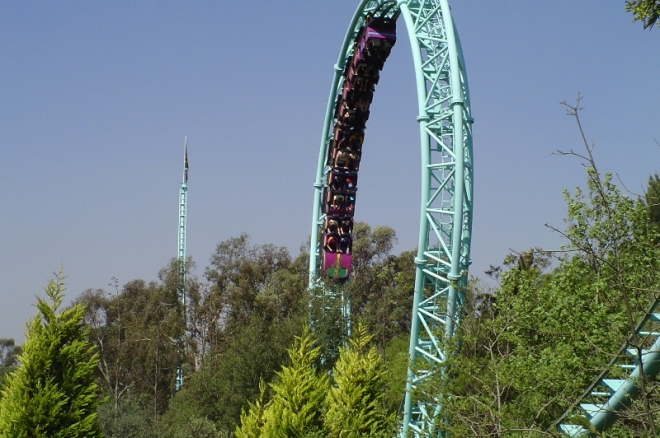 This first generation Schwarzkopf Shuttle Loop originally opened in 1977 at Carowinds (Charlotte, NC) as White Lightnin’.  After it closed in 1988, it was purchased by Gold Reef City in South Africa and was renamed as the Golden Loop.  This picture was shot at Gold Reef City by Ello Coaster, 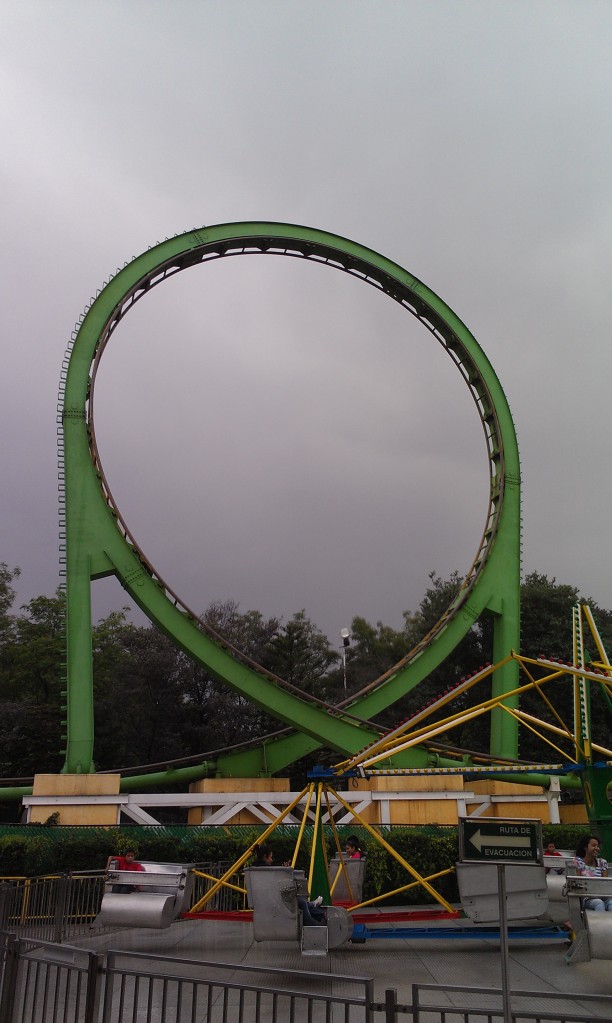 El Cascabel at La Feria de Chapultepec in Mexico originally opened as the Laser Loop at Kennywood (West Mifflin, PA) in 1980 and closed in 1990.  It reopened at La Feria in 1994.

El Cascabel is a second generation Schwarzkopf Shuttle Loop that use a Flywheel launch system.  This is the backward spike.

The forward spike on the Shuttle Loop at Nagashima Spaland.  Like Cascabel, it is a Flywheel launch second generation Shuttle Loop.

This is nearly the maximum height the train reach on a Shuttle Loop.

In 1980 over in Japan, Meisho Amusement Machines introduced their take on the Shuttle roller coaster, using a long chain lift behind the station.  Once at the top, the train is released, goes through the station, navigates a vertical loop and then up the spike.  The end of the spike that Meisho designed was the steepest element in the world at the time, 80 degrees. 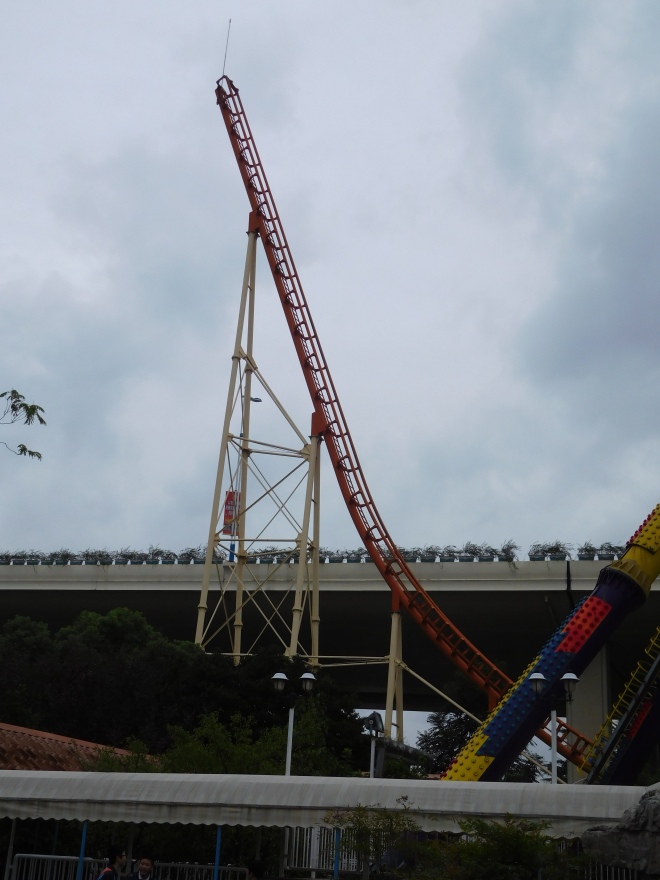 After Greenland in Arao, Japan closed down Atomic in 2009, the park conserved the loop and it still remains today in the valley where the ride dropped down. 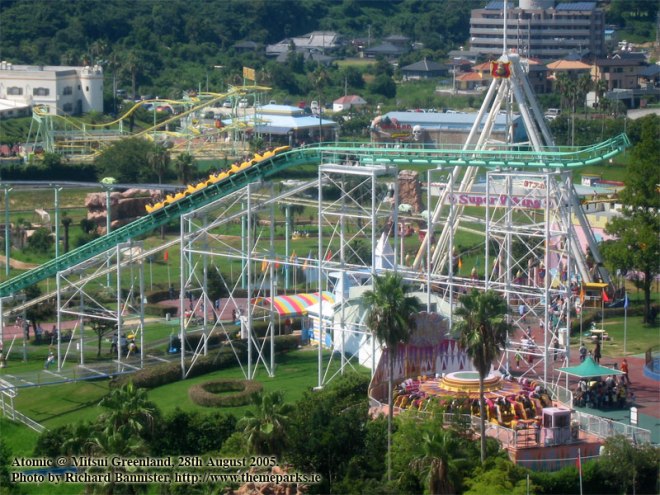 The chain lift on Atomic.  This photo appears courtesy of http://themeparks.ie/.