Fiesta Texas was primarily a show park when it opened in 1992 in a disused quarry near San Antonio, TX.  The park was owned by the USAA Real Estate Company (a subsidiary of the USAA insurance company) with the Gaylord Entertainment Company having a minority interest.  The park initially featured a smaller than expected line-up of attractions as the focus was on quality shows.  Gaylord Entertainment, who operated Opryland in Nashville, TN, was the operator of the park when it opened.

The Screamin’ River Demon was an Intamin Swiss Bob roller coaster that operated at Opryland in Nashville from 1984 to 1997.  Ello Coaster provided us with this great photo.

The Gully Washer opened in 1992 and is an Intamin River Rapids 9.

The Gully Washer in one of its more active section. 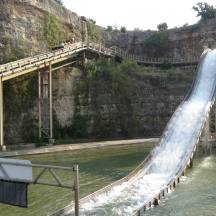 The Power Surge was a custom Intamin Spillwater that operated at the park from 1992 to 1999. 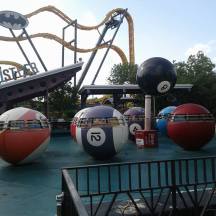 Motorama was an electric car ride and was the sister attraction to the Hustler, a unique Morgan tea cups style attraction where the cups were replaced by pool balls.

The Pied Piper is a small Vekoma Junior Coaster that is currently known as the Kiddee Coaster and it opened with the park in 1992. 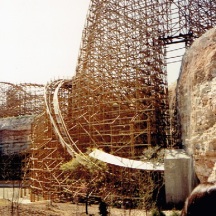 The original record breaking drop of the Rattler.

The quarry dive on Rattler. 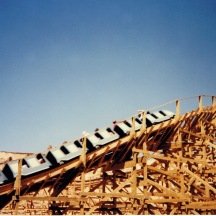 Ello Coaster provided us with those amazing photos of Rattler.  The Power Surge photo came from Flex and Park Vault provided the photos of Pied Piper, Hustler and Gully Washer.

In 1996, after park expansion had started along with a refocus on rides had started to occur, Warner Bros. purchased the management and operation of the park.  A Vekoma triple inversion roller coaster had been bought and was to be called the Hurricane, due to its placement in the Fiesta Bay Boardwalk area that had opened in 1994.

Warner Bros. quickly rebranded the park as Six Flags Fiesta Texas and, changed the name of the Hurricane to Joker’s Revenge.  The trains were turned backward to illustrate the chaotic nature of the Joker and an innovative funhouse queue constructed to house the waiting line.  They also transferred from Six Flags Over Texas (Arlington, TX) a Schwarzkopf Enterprise and placed it in the Crackaxle Canyon area.

Warner Bros. sold the Six Flags chain to Premier Parks in 1998 and in October of the same year, Premier Parks purchased the whole equity of Six Flags Fiesta Texas from USAA Real Estate Company, making them the sole owner.

The Boomerang (Vekoma) opened near the entrance.  Negative-G provided us with this picture.

A few new kiddie rides spread around the Crackaxle Canyon and Spassburg areas.  The water park was renamed Armadillo Beach (from the Ol’ Waterin’ Hole when it premiered in 1992,) and a large treehouse style playground called Texas Treehouse along with Texas shaped Lone Star Lagoon wave pool opened.

For 2000, Premier Parks spent 20 million $ on a new roller coaster, Superman: Krypton Coaster.  It is the world’s tallest Floorless Coaster and featured the largest loop on a roller coaster the time.  There was a space on the quarry between the Power Surge Spillwater ride and Spassburg area, so Bolliger & Mabillard (B&M) designed a custom roller coaster that would take advantage of the beautiful location and the quarry location.

Our friend Flex provided us with this great photo of the Quarry.

Superman was selected as the theme and the familiar B&M track painted in Superman colors with the red track, unpainted steel running rails and rich blue supports.  A large station building was constructed and decorated accordingly. 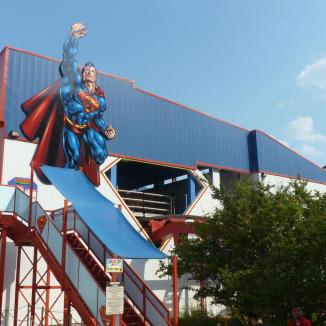 The station building, courtesy of Flex.

The ride starts with a left-hand turn that leads to a 168 feet tall lift.  The crest of the lift hill is above the 100 feet tall quarry wall and, a speed adjusting brake is mounted after the train goes over the top.  A flat run leads to a curving 163 feet drop that brings the train near the quarry wall, racing at 70 mph.  The world’s tallest vertical loop at the time followed: a massive 145 feet inversion that has a Superman statue mounted on top.  The train rises back up on the wall for a weird helix turn that reminds the writer of a similar turn on the Cobra/Batman: The Escape stand-up roller coasters that Intamin introduced in 1987/1988.  Cobra ran at La Ronde (Montreal, QC) from 1995 to 2017 and Batman: The Escape at Six Flags Astroworld (Houston, TX) from 1993 to 2005.

The lift hill and first drop.

http://www.negative-g.com provided us with this close-up of the first drop.

The top of the loop from a shopping mall above the park. 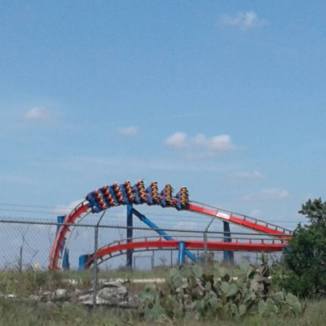 The Helix from the shopping mall.

Batman: The Escape from Ello Coaster, the odd Helix is on the left.

The Helix on the Cobra at La Ronde.

Following the second Quarry dive, the train executes a tall and long Zero-G-Roll that have riders experience a brief moment of weightlessness.  A blazingly fast 78 feet tall Cobra Roll over water followed the Zero-G-Roll; a rising S curve to the left leads the train to the mid-course brakes, where the train slowed down a little.  A sharp drop to the right brings the train to its 5th and 6th inversions, interlocking corkscrews.  Rising turns concludes the 4025 feet long journey.

An overview of the layout post second quarry dive. 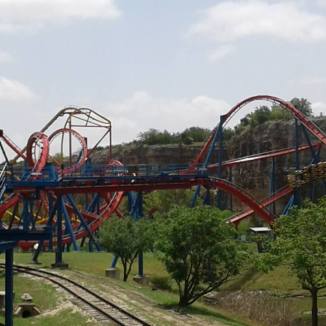 The ride is equipped with three 32 passenger trains like both Medusa and Kraken and brought much-needed capacity to the park.  Capacity is one of the most substantial advantages of the Floorless Coaster.

One of the ride’s three train in the station. 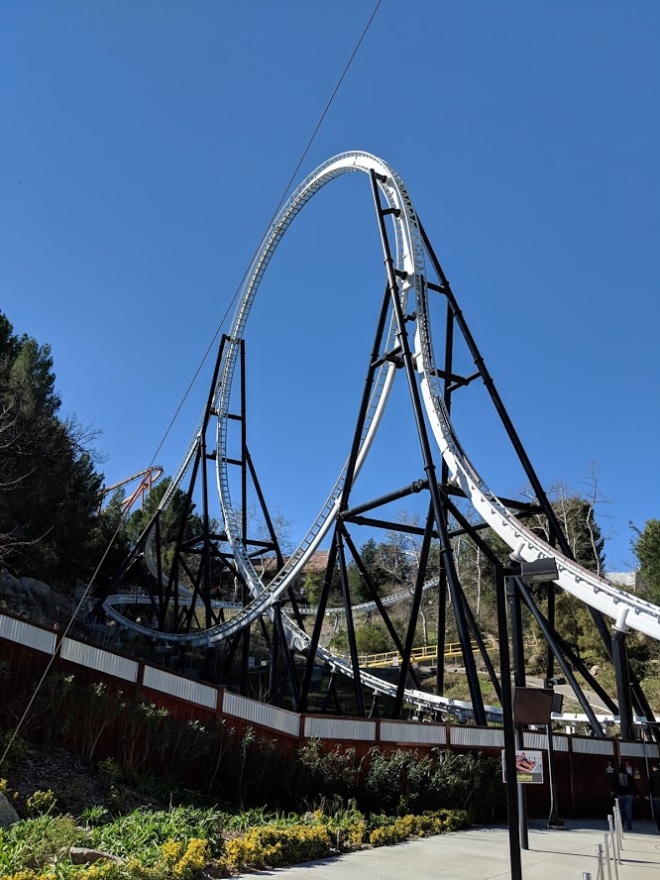 The 160 feet tall loop/top hat hybrid element on Full Throttle.  This is a Premier Rides creation.