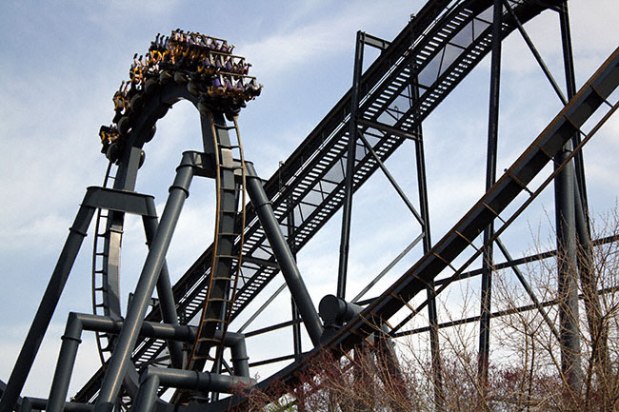 The other 1995 Inverted Coaster was also a mirrored Batman: The Ride, but this one still runs 8 car trains.  In 1988, Six Flags St. Louis (Eureka, MS) had removed their Schwarzkopf Looping Star (Jet Scream) and replaced it elsewhere in the park with a custom Arrow/Vekoma looping coaster called the Ninja in 1989. 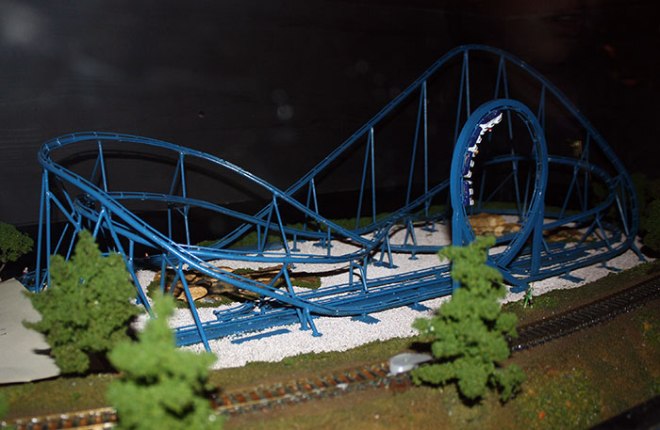 http://www.negative-g.com/ provided us with this great picture of the Jet Scream scale model.

Jet Scream was moved to Six Flags Astroworld and reopened there as the Viper in 1989.  This picture appears courtesy of ElloCoaster.  http://www.ellocoaster.com/

This left prime land next to the entrance free and in 1995, a mirrored Batman: The Ride appeared as the center piece of the “Time Warner Studios” themed area.  This replaced the opening day USA area and as part of the changes, the Intamin Buccaneer swinging ship was renamed to the “Gotham Harbor”.  Jack Rouse Associates from Cincinnati, OH was hired by Six Flags to design the new facades and look of the ride and they integrated many elements from the 1989 Batman movie such as the Monarch Theater.

Paul and Bond from Negative-G Head to Six Flags St. Louis to get some rides and take a look at what is new for 2016.

http://www.negative-g.com/ provided us with this shot of the Monarch Theater facade.

http://www.negative-g.com/ provided us with this picture of the train starting to go down the first drop.

Join Paul and Bond from Negative-G as they head to Six Flags St. Louis for the annual American Coaster Enthusiasts Daredevil Daze event.

The train about to enter the first Flat Spin.   http://www.negative-g.com/ provided us with this picture.

Batman: The Ride here expanded on the design seen at Six Flags Magic Mountain for the queue line, but made longer in the skid row part since there was no space to build an extended queue in the Gotham City Park.  After exiting the Gotham City Park, guests walk through a tunnel made of a corrugated steel pipe that goes under the loop and lift before reaching Skid Row under the collapsed Overpass.  Guests then walk further and there is another set of queue under the transfer track.  Guests then enter the Storm Drain Access and don’t go under the station.  They instead go up straight to the station.

The ride was built on a hill and has a commanding presence next to the entrance.  Flex provided us with this picture. 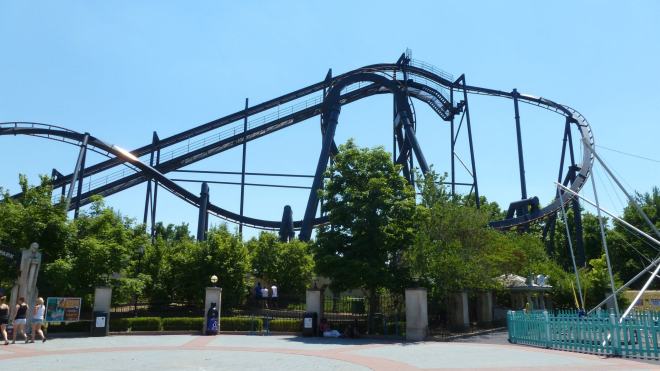 The ride as seen from the plaza in front of the ride.  Flex provided us with this picture.

Flex shot this overhead view of the attraction.

The ride opened with the same Butler costumes and fog effects in the station, but those quickly disappeared.  The police car was removed after a few years since some guests had damaged the windows and it was not worth it to constantly repair then.  In 1996, Gotham Harbor was again renamed and became The Joker Inc., complete with green paint and “Ha Ha Ha” painted all over it. A see through portrait of the Joker was also installed in front of the structure.  The ride opened with black supports and track, but the park decided to repaint it to its original colors a few years back.

In 2011 during Fright Fest,  http://www.negative-g.com/ shot this picture of the ride covered in smoke.  To give it a scarier and gloomier atmosphere, the park installed multiple smoke machines around the ride.

http://www.negative-g.com/ provided us with this picture of The Joker Inc.