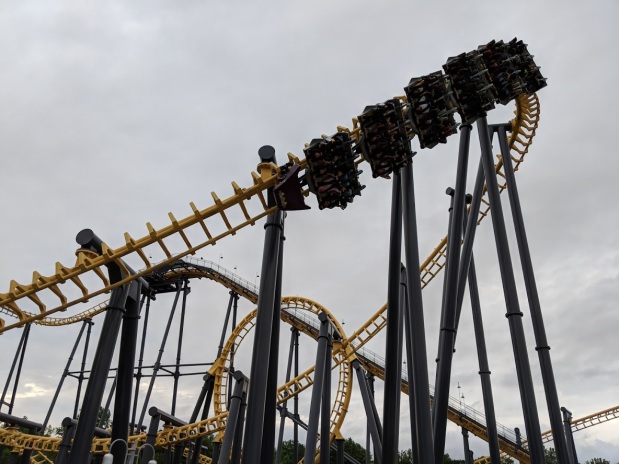 (for part 6 of our Vekoma retrospective: Part 6 featuring the Giant Inverted Boomerang and Wooden Coasters)

The second product to debut in 2001 was the Tilt Coaster. It is a unique experience that has so far been ordered by only one park, Discovery World, at Lihpao Land in Taichung, Taiwan. Known there as Gravity Max, the ride was completed in 2001, but the park only opened in 2002.
The ride itself is straightforward: after a steep 45 degrees 114 feet tall lift hill, the train rolls on a flat track section and it stops. At that point, a metal block raise in front of the first car chassis, the pneumatic pinch brakes grab the train, and a metal hook attaches itself to the back car, similar to a Boomerang. Once all three safeties are engaged, the track… moves. The colossal track section tilts forward until it lines up at a 90° angle with the drop track. Once the track is in the proper position, the steel block slides down, the hook disengages, and finally the brakes open. The train drop down the vertical drop in what can be called a face down freefall goes under the walkway and around a banked curve. It powers through a 88 feet tall loop that wraps itself around the waiting line/exit bridge and then goes around a Bayern Curve helix. The train stops in the final brakes after.

The view of the ride from the ride entrance plaza. Interestingly, when the platform start moving, everyone stops in their tracks and gasp at the ride! 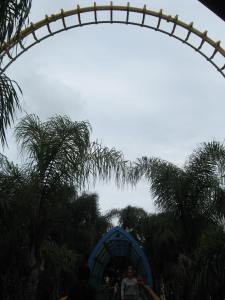 The ride exit and entrance bridge. The loop wraps around it, similar to French Revolution. 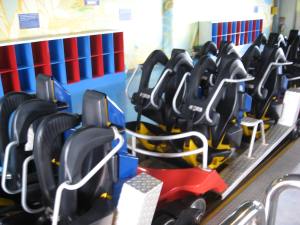 The MK-1211 train is very comfortable and tracks very well, even in the tight curve after the drop. 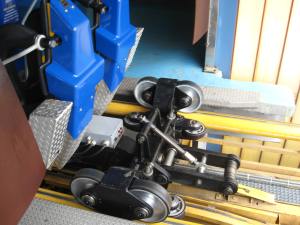 The attachment that the hook attach itself to on the platform.

To provide a better view, Vekoma designed a new train for this ride. Known as an MK-1211 train, it has a very open design and a more comfortable shoulder restraint. 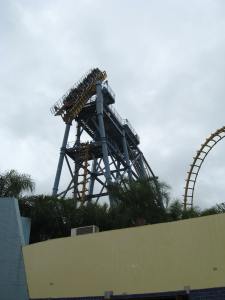 Park Vault was fortunate to experience this ride in 2010, and the writer’s opinion on this is pure: the greatest ride experience in the world. Nothing can beat the sheer terror and fear when the track tilts and then the best drop in the world when you’re released.

The last new product was the Suspended Family Coaster. The first two were sold to Paramount Parks, who placed them at Kings Island (Mason, OH) and Canada’s Wonderland (Vaughan, ON). The ride features a compact 1122 feet long layout and a tire driven 49 feet tall lift hill. The single train has 10 cars with two riders in a row that are secured by a small shoulder restraint. The ride was popular and Paramount purchasing the 3rd one for Carowinds and parks in Australia (Dreamworld in Gold Coast) and three other American parks buying them as well.

Silver Streak at Canada’s Wonderland (Vaughan, ON). This is one of the two prototypes that opened in 2001. Photo provided by Jordan May.

The train coming off the lift hill.

The train wraps itself that umbrella support at the start. 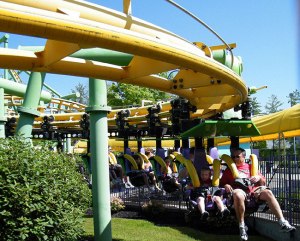 The original train used on the Family Suspended Coaster. The above three photos appear courtesy of www.negative-g.com.

The Flying Coaster was evolved, with two new models appearing as the Batwing at Six Flags America (Largo, MD) and X-Flight at Six Flags World of Adventure (later renamed Geauga Lake in Aurora, OH). Vekoma delivered them with the original on-board hydraulics, and a split station patterned after the one on Space Mountain (Disneyland Paris) integrated into the layout. That layout was also modified to have a longer “Flying” portion at the end when the double Corkscrew turned to a double barrel roll and a Bayern curve added before the final brakes. It was initially set to run three trains, but both parks were never able to efficiently. 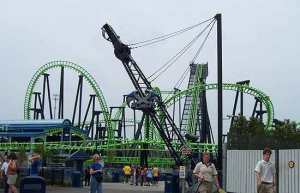 X-Flight layout from the front of the ride.

The car in the ready position.

Batwing station. As you can see, it use the rounded glass portion in the middle like Loup-Garou at Walibi Belgium and Vampire at La Ronde.

The special ride vehicle used on the Vekoma Flying Coaster.

The original hydraulics on the train, before the other two installations had them replaced.

The train about to go down the first drop.

The train in the elevated banked curve. 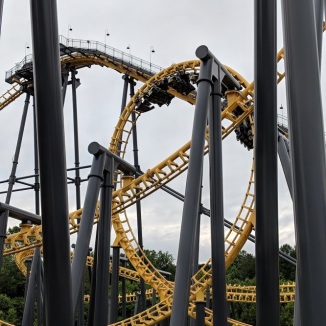 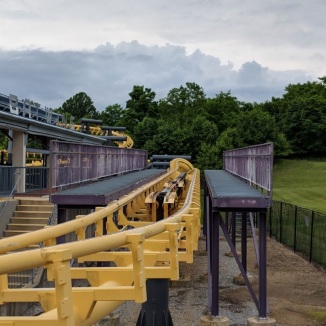 The brake section at the end with the half-roll before.

In 2007, Cedar Fair moved X-Flight to Kings Island (Mason, OH) and renamed it Firehawk. It was repainted with dark red track and charcoal supports. Two trains were rebuilt, and the on-board hydraulics removed. The same station hydraulics as Stealth was installed, and wheels mounted on the side of the cars to work with those. 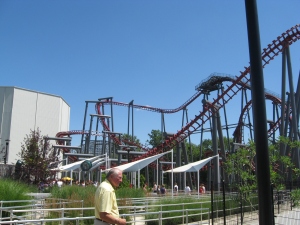 The lift and first drop.

In 2002, Vekoma introduced two new Suspended Looping Coasters, each featuring a custom layout. The first one to open was “Shenlin” or as the Chinese name translates to English, Snow Mountain Flying Dragon. It opened at Happy Valley in Shenzhen, China and feature a more spread out layout than the traditional SLC and its myriad of variations. The layout here start with a 118 feet tall lift hill that lead to a spiraling 270 degrees 112 feet drop. The train execute a 87 feet tall loop, a 75 feet tall Cobra Roll and then a 55 feet tall Zero G Roll, the first ever on a Vekoma coaster.  The ride concludes with an inclined Bayern curve which leads into the brake run. This particular installation is nicknamed the “Shenlin” layout and Flamingoland in Malton, UK ordered a clone in 2006, where it operates as Kumali. Happy Valley group ordered two more “Shenlin” for their Beijing and Changdu parks, but those feature an extended layout with an extra raising flat helix before the brake run.

The loop with its unique support structure.

You can see most of the layout in this picture. The three pictures appear courtesy of Flex.

A look at Golden Wings in Snowfield at Happy Valley Beijing. 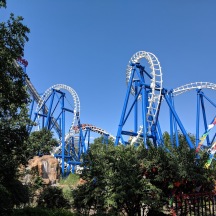 The inversions of Golden Wings in Snowfield.

The second custom SLC to open that year was the Jubilee Odyssey at Fantasy Island. Located in Ingoldmells, UK, this unusual park is built around a giant flea market. A large custom MK-1200 Vekoma Looping Coaster encircles the market, and in 2002, in honor of her Queen’s Elizabeth II Golden Jubilee, the park opened a new Inverted roller coaster. Standing 167 feet tall, it was the second tallest full circuit Inverted coaster in the world when it opened.
After the steep 60 ° 141 feet first drop, the ride single train reaches 63mph and goes through a 124 feet vertical loop. It then goes through a Cobra Roll, a Horseshoe turn (similar to the Flying Coasters), a Sidewinder, a massive 270 degrees turn, and then a Corkscrew before the brake run. The 2924 feet layout is traveled at a brisk pace, but there were concerns with the train stalling in periods of high winds. After the 2002 season, the Horseshoe, Sidewinder, and turn were modified and lowered.
The main modification to the ride design was the train. It went away from the Suspended design that used hydraulic cylinders to keep the carrier in place to a rigid carrier. That and a redesigned bogie assembly for the wheels minimize the roughness that sometimes affects the various SLC’s. One further modification in 2005 was changing the restraints to go from the classic post-1995 design to the Giant Inverted Boomerang shoulder bars. 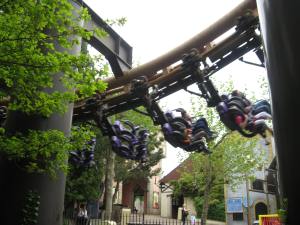 The Vampire swinging in Transylvania.

That same year, Chessington World of Adventure in Surrey, UK, reopened their Vampire Suspended Roller Coaster. It opened in 1990 and was built by Arrow Dynamics. The 2200 feet long layout had two lifts, and the finale involved a curved drop into a tunnel. After the 2000 season, the ride closed and throughout 2001, got a full renovation completed by Vekoma. The three bat trains were replaced by new floorless swinging cars. Those cars are trailered, and each vehicle is composed of a single row, whereas the original trains had 7 cars with two rows each. So, capacity went down to 24 riders per train, but the longer trains caused a significant modification: the old transfer table was too short. As a result, Vekoma welded the transfer table in place and fabricated a new track loop. That loop goes from right behind the station to the existing transfer track with two rotating track switches used to connect.

The new cars have a bigger envelope, so the park dug up the tunnel and poured new concrete to secure the foundations there. The trim brakes before lift two were adjusted, as the new trains were coming in too fast. It worked, and the ride got a new lease on life, still operating in 2019.

The Vekoma train swinging in the middle of the forest. 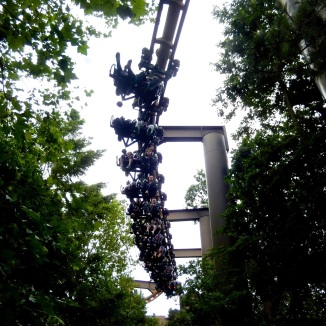 The train is quite long, leading to modifications on the ride. 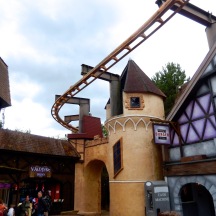 After the second lift, the train flies above Transylvania.

The portion in the forest is more compact than it appears at first sight.

Our friends at Coaster Kings provided us with those photos of the Vampire off their Thrillography page.

Booster Bike opened in 2004 at Toverland in Sevenum, Netherlands. This unique roller coaster is a revival of a long-extinct genre: the Steeplechase roller coasters. Originally conceived at the park of the same name in New York City, this unique ride had riders sitting on large horses that were similar to their Carousel siblings. It gave a complete sense of vulnerability, and unfortunately, the last of the original ones closed in 1964. In 1976 and 1977, Arrow Development developed a new version, where the 1976 installation at Knott’s Berry Farm (Buena Park, CA) featured four parallel tracks, and pairs of riders sat on large motorcycles. That installation, after getting converted to “Soapbox Racers” closed in 1995. The 1977 installation one still operates at Pleasure Beach in Blackpool, UK, with this one featuring three tracks.

Vekoma fixed two issues: safety and capacity. Security was the main one to overcome, as riders were subject to unusual forces, and with only a seatbelt to hold you in, it made most parks nervous and led to the motorcycles retirements at Knott’s. For capacity, two motorcycles would be installed side by side in each car, and the train would consist of 8 cars.

You can see the return hill and catapult in this picture.

The banked curve leading into the station. Now, motorcycles usually feature sharp accelerations, so the ride was designed to include a new Hydraulic launch catapult that would shoot our motorcycle convoy from 0 to 46 mph in 3 seconds. Wide swooping turns and drops added to the 1969 feet long layout. The motorcycle itself force riders in a crouched position, and when riders pull the handles, a backrest move forward and restrain passengers in the optimal position. 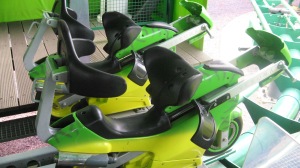 Motorbike Launch Coaster at Chimelong Paradise in Guangzhou, China. It is similar to the prototype ride and opened in 2006. 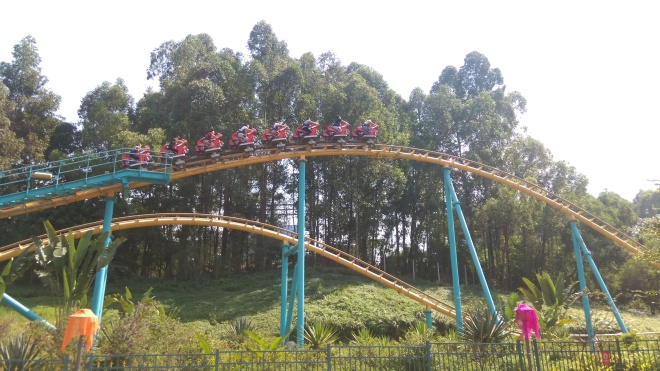 The train is cresting the first hill.

The ride is known today as a Motorcycle Coaster in the Vekoma catalog, with both a standard layout (the Booster Bike) and custom installations offered. 5 were sold to date, with a possible 6th to come in 2015-2016 at the time of the original article.  This 6th installation became the TRON Lightcycle Power Run at Shanghai Disneyland that opened in 2016. Another TRON roller coaster, this time named the TRON Lightcycle Run will open in 2021 at the Magic Kingdom at Walt Disney World in Florida.  Further details on TRON can be seen here.

Prepare to enter the Grid: Part 13 of our look at Vekoma

Both installations were the first Vekoma rides to be delivered with Eddy-Current Magnetic brakes. On both rides, they are used to trim most of the speed at the end, and the regular pneumatic brake calipers stop the train and hold it in place.