In 1992, Tokyo Dome City (Tokyo, Japan) located near the famous Tokyo Dome stadium opened a new roller coaster. It was built inside the building that has the “Sky Flower” parachute drop and various roller coasters on the roof. Togo designed a two lift indoor coaster that combined various effects and it also weaved in and out of the building main hall. The second lift was mostly flat and felt like a mini launch, giving the ride nice power for the second portion of the experience. The trains were extremely odd as well:  the restraint consist of a shoulder restraint attached to a T bar. The ride closed in 2008-2009 when the building was re imagined and the ride replaced by a 4D dark ride.

The ride dived in and out of the main Geopolis hall.

In 1993, Kumdori Land in Daejon City, South Korea opened as part of the 1993 Asian Expo. It stayed open until 2012 and had 3 roller coasters. The one that is of interest to us for this history is the Space Adventurer, the first Vekoma “Enigma”. Enigma refers to the compact indoor roller coasters that use the MK-700J track and cars. For Space Adventurer, it was very simple, as it used space shuttle themed trains and it had two outdoor lifts. Once at the top, you dropped and did a fast and tight run inside a tent. It was completely pitch black inside and the 1099 feet long course went by quickly.

From our Vekoma serie, those are the cars used on Space Adventurer.

In 1993, the MGM Grand resort and casino opened with a theme park in Las Vegas, NV. The MGM Grand Adventures Theme Park featured various themed attractions and experiences and had an indoor roller coaster. Designed by Intamin, built by Giovanola, it was marketed as a Family Indoor Coaster and the Lightning Bolt featured a 49 feet tall lift hill and 1119 feet long layout. The ride had a space theme inside and concluded with going over a model of the Las Vegas Strip on the brake run. It was moved outside in 1997 and Arrow Dynamics constructed a second 69 feet tall lift hill and extended the track to 2400 feet. It closed down for good along with the park in September 2000.

In 1994, La Ronde (Montreal, QC) revitalized the old “Village” area by taking advantage of the medieval fad that was going on at that time. Buildings were redressed, medieval shows were implanted and a few buildings were removed for a new roller coaster. Like the Lightning Bolt, it uses the Intamin Family Indoor Coaster track and cars.

The Dragon loading station. One 24 passengers train is used and interestingly, no brakes. Drive Tires in a double pinching configuration brake the train at the end and parks it in the station. Then more tires are mounted on the curved lift hill.The train itself has 12 cars and a ratcheting lap bar per row. A pneumatic release is used, hence the red box at the back of the last car.

The “Dragon” is perhaps the only example of an indoor coaster where the waiting line and station is utterly bare while the inside is filled with effects and scenery. After boarding the 12 cars train, riders go up a curved lift hill to the right. As soon as you enter the building, the dragon start attacking as 3 fireballs are projected on the right side curtain. You also had a heat projector at one point so riders could feel “the heat”. At the same time, wooden grinders would spin over your head as you passed by. At the top, the Dragon flashing eyes would look at you through a dungeon window and the train turns to the right. 3 previous victims in the form of rotting corpses hung from the ceiling as you start picking up speed. You turn to the right again and see a few lighted dragon eyes. You go over the lift and dive to the left behind another curtain as you go under a steel fence. That fence is covered in sparks to simulate the furious flight of a horde of bats.

You turn to the left, hear the Dragon stomping around and see yourself in a mirror. The ride then does a helix around the two Dragons and then you are swallowed by the Dragon in a cloud of smoke. You go through the stomach and the ride ends with another helix around lighted crystals.

The ride effects broke down throughout the years and the original soundtrack that accompanied each effect was sadly lost forever in 2007-2008. Thankfully, Six Flags restored many of the effects, got a new soundtrack in 2012-2013 and the ride is again in great shape. As you can see by my description, a more accurate description would be a “dark ride that uses a roller coaster mode of transportation”. It is a true gem and the ride immense crowds reflect that. On many days, it will have the longest line in the park.

The ride waiting line with the loading station on the left.

The front side of the building.

In 1995, Lotte World (Seoul, South Korea) had Intamin design a new roller coaster for the Magic Island outdoor park. The location was unique: an underground storage area! Two long trains with 12 spinning cars each and high seat backs were designed for this ride. The ride itself, due to the lack of vertical clearance is powered using high speed pusher tires throughout. The ride itself goes around 5 separate rooms each filled with space props and monsters. It is a very unique experience and it is quite unusual to have to head into the basement to go on a ride. Comet Express is a very popular ride and is the one attraction in the Magic Island to run in rain or snow conditions. The ride model is called “Twist and Turn Coaster” by Intamin and is one of the few spinning coaster to run full size trains.

When Leofoo Village in Guanxi, Taiwan purchased in 2002 an Intamin Twist and Turn Coaster. It was installed outdoor in a family coaster configuration, but what is interesting is that the cars are the same as Comet Express, down to the front car. 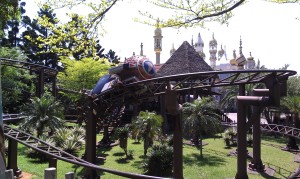 You can see the train in those two pictures. The logo on the comet is a twister due to the ride’s name: Sahara Twist.

On the right of this picture, you can see the station and the drive tires. Both the Intamin Twist and Turn Coaster and Indoor Family Coaster share the same drive tires.

Where to find Dole Whip at Disneyland Paris!
Avengers Assemble: Flight Force at Walt Disney Studios Paris.
Waiting to enter the Walt Disney Studios in Paris. Song playing as I was walking up? The theme to Star Trek the Next Generation.
Alpina Blitz
Recognise the posters?
Dainan Rafferty Sam Moon Rafferty about to ride Krampus expedition!
Loading Comments...
%d bloggers like this: