The second Arrow Suspended Coaster to open (and the first successful one) was XLR-8 at Six Flags Astro World (Houston, TX).  Originally designed and built to be easily moved, this two lifts Suspended Coaster was a tamer design than the original Bat that opened in 1981 at Kings Island (Mason, OH).  The Bat was an extreme attraction that suffered from design flaws that lead to its dismantling after the 1983 season.  Arrow-Huss learned from that ride and corrected all the major flaws, such as moving the braking fins from the bottom of the passenger car to the chassis like on a regular roller coaster.  They also banked the turns and thus, XLR-8 operated from 1984 until the park closed in 2005.  It was never moved as well.

http://www.ellocoaster.com/ provided us with this great picture of an XLR-8 train going through a turn.

After the issues with the original Bat at Kings Island, Arrow-Huss did not take any chance and made the ride supports and track connectors oversized in order to take the ride unique forces.  This picture appears courtesy of http://www.ellocoaster.com/ . 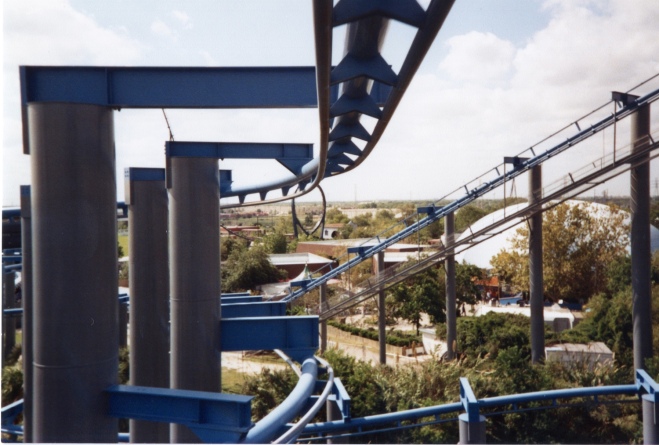 A great shot on-ride and you can see one of the ride’s lift hill in the background.  http://www.ellocoaster.com/

This was shot when the train was at the top of the second lift hill. http://www.ellocoaster.com/

The ride was rather tame and not very exciting, but served a niche as a great high capacity family coaster for the park.  It was originally built on top of the park River Cruise attraction that was patterned after the world famous Disney Jungle Cruise.  Thus, even after the River Cruise closed, you could still the remnants of the canals under.

The second Suspended Coaster to open was the Big Bad Wolf at Busch Gardens Williamsburg.  This ride was originally designed and construction started by the Schwarzkopf company.  It was to be a “Flughbahn” Suspended Coaster, which Schwarzkopf sold as the first ever “Flying Coaster”.  Large 3-4 row cars were to be attached together in a long train and the ride would have used the terrain to its advantage.

Unfortunately, the Schwarzkopf Company went bankrupt when the supports were being installed at Busch Gardens Williamsburg and the park got Arrow-Huss to come in and complete the ride.  It opened on June 15th 1984 and was a very popular ride at the park until it closed on September 7th 2009.

The Big Bad Wolf was a ride with two personalities: it started with a large S curve out of the station that leads into the first lift hill. It was only 50 feet tall, but gave the train the speed to swing past Bavarian village houses in the first section. The view was breathtaking and for a while, at night, candles were lighted up in the windows.  Thus, you truly had the impression of being a giant wolf running through the village.

Exiting the village, the train executed a 360 degrees downward spiral and was then stopped completely. It slowly crept on the right toward the second lift hill, which was 100 feet tall.  At the top, the train turned to the left and dropped down the ride signature element: a steep 80 feet drop that leads into an incredible turn at the bottom where our car swung past 90 degrees.  Unfortunately, due to the extreme forces exerted on both the track and trains, 4 trim brakes were installed on that drop and slowed the train quite a bit.  After the banked turn, the train did a high speed “right-left” sequence where we swung again beyond 90 degrees.  As the train kept rising, it lost speed and eventually, it lines up with the station and is stopped. This spectacular 2800 feet long journey was legendary and it is one of the greatest ride’s we lost in the years 2000.

Richard Bannister from www.themeparks.ie provided us with this great shot of the ride signature drop and turn at the bottom.

The last ride to open that year was the Dragon at Ocean Park Hong Kong. It was a part of a large package of Arrow-Huss rides that opened around that time, such as the Enterprise “Space Wheel” and the Raging River log flume. The Dragon is a truly odd roller coaster, as it is built on the side of the mountain and the first lift hill is only 67 feet tall. But, thanks to the slope it is built on, the lowest point of the ride is when the train hit the sidewinder and the train reaches 48 mph at that point.

The train’s leave the station and make a left turn into the first lift hill. Once at the top, it does a banked left turn which leads into a curious straight section of track; it then dives to the left in a banked drop that leads into the first Vertical Loop. The train then does a right hand descending banked turn that drops into the second Vertical Loop, which is taken at a much faster pace than the first one. The train then executes the world’s first Sidewinder inversion (Half loop into a half Corkscrew) and then the train does a rising 270 degrees turn that leads into a 360 degrees helix (spiral). Exiting that, the train goes up into a left hand banked turn that leads to the second lift.  Given that the second lift hill is not as tall as the first one and the course we just travelled did not burn off enough speed, a few trim brakes engage on the hill leading to the turn and slow the ride down enough.

An overview of the Dragon and notice the dramatic cliffside location.

That second lift is unique, as the Dragon is one of two non launched looping coaster to feature two separate lift hills. At the top of the lift hill, the train drop slightly, turn to the right and is stopped in the final brakes. A left hand turn brings it over the transfer track and into the station. 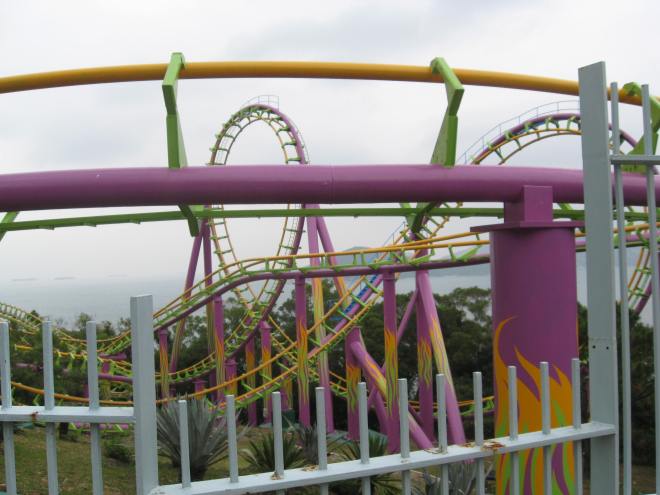 The Dragon is 2694 feet long and can operate with two 7 four passenger car trains.  The ride originally started its life with a complete white color scheme and at one point, the supports were painted light blue.  Then, in the early 2000’s, the track colors were switched when the track went light blue and the supports white.  Finally, for the 2010 season, the ride was repainted to its current gorgeous colors with purple supports and track spine, green cross ties and yellow rails.  Yellow, orange and green flames were painted as well on the supports and this give the ride quite a unique look.

The trains always had a 7 color pattern where each car has its own color.

In addition to the Dragon, the park added three other Arrow-Huss attractions in 1984:  The Space Wheel Enterprise, the Crazy Galleon Pirate and the Raging River Log Flume.  We will discuss in details those attractions when we publish our history of Ocean Park later this year.