No Arrow-Huss roller coasters opened in 1985, but 3 were scheduled for 1986: The Corkscrew Coaster at Rainbow’s End Theme Park in Auckland, New Zealand, the Crazy Roller Coaster at Nanhu Amusement Park in Guangzhou, China and the Scream Machine at Expo 86 in Vancouver, British Columbia, Canada.  The Corkscrew Coaster is a standard Loop-Screw roller coaster that was able to be completed by Arrow-Huss with no issues.  The other two rides saw their construction stop due to the bankruptcy of Arrow-Huss.

In late 1984, due to the financial difficulties of the company incurred by its participation in the failed World Fair held in 1984 in New Orleans, Louisiana, USA and the problematic agreement with Darien Lake along with too many rides in development at Arrow, the company filed for bankruptcy.   13 employees made an agreement with the bankruptcy court and took over the Arrow assets, forming the Arrow Dynamics company with Ron Toomer serving as the company president until 1993.  In 2001, Arrow Dynamics went bankrupt again and some of the assets were purchased in 2002 by S&S Power.

Huss in 1986 became Huss Maschinenfabrik once again and continued its operation in Bremen until 2006, when it again went into bankruptcy. The original company is now gone and the current Huss Park Attractions is not related, but hold all patents and rights on attractions.

So what happened then with the Crazy Roller Coaster and Scream Machine? Vekoma was called in by the parks and completed those roller coasters, making them unique Arrow-Vekoma hybrid roller coasters.  Since Vekoma technology is compatible with Arrow rides, it was a natural fit to have them finish those roller coasters.  Crazy Roller Coaster is currently not in operation at Nanhu Amusement Park.  As for Scream Machine, it was sold to Six Flags after the fair concluded and it reopened as the “Ninja” at Six Flags Saint-Louis (Eureka, Missouri, USA) in 1989.

Crazy Roller Coaster layout had some truly weird banks, such as the very sharp curved banked first drop that leads into a rising turn. It sharply dropped again into the Double Corkscrew without never truly straightening up at any moment. After the Double Corkscrew that had a truly odd entrance, the train did an airtime hill and then the world’s first Reverse Sidewinder. You start with the Half Corkscrew and finish with the half loop. A standard vertical loop follow and another strange banked turn leads to what should have been a mid course brake. But, the brakes were probably never installed and the train enters with a lot of speed a descending turn that leads into a rising helix that ends in the final brakes.  In addition to Scream Machine, two water rides were also finished by Vekoma:  a log flume and Shoot the Chute. 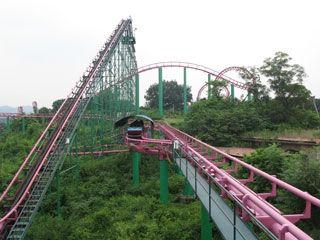 Richard Bannister provided this very picture of Nanhu Amusement Park “Scream Machine”.  You can see one of the thing that Vekoma modified, the rotating track switch.  The ride has since been shut down unfortunately.  http://www.bannister.org/

For the Scream Machine in Vancouver, the ride start with a left hand banked turn.  The train then goes up the 108 feet lift hill and drops a bit after cresting the top. It then turns to the right, drops a second time into the Vertical Loop, lowers again which allows the train to hit its maximum speed of 55 mph before executing a Sidewinder inversion. The train then rise into a 270 degrees turn that leads into the mid course brake where it is is slightly slowed and it drops to the right into the Double Corkscrew. Exiting that, it executes another spiral and then rises up and turns into the final brakes. Vekoma influence can be again seen at the end, as the traditional Arrow sliding transfer track was replaced by a rotating track switch and parallel transfer track that is fixed.

Flex provided us with this great overview of the lift, Sidewinder and 270 degrees helix into the midcourse brakes.  You can see the rise out of the final spiral. This picture was shot at the ride second home, Six Flags St-Louis (Eureka, MS). It was purchased by Six Flags from the fair and installed in 1989 at their then Six Flags Over Mid-America property.

http://www.negative-g.com/ provided us with this great shot of the Ninja at its new home at Six Flags St-Louis and you can notice the typical Arrow scaffold supports on the lift hill and turn.

This conclude our Arrow-Huss serie and we invite all readers to learn more about Arrow by watching the “Legacy of Arrow Development” documentary. Produced by the American Coaster Enthusiasts, it will debut online on 02/26/2016 at 15:00 eastern USA time and features many interviews and footage of important Arrow landmarks and attractions.