When Universal Studios Florida opened in 1990, the evening show would be a water stunt show, presented on the park lagoon.  Known as Dynamite Nights Spectacular, this show had the storyline of a police group trying to stop weapon smugglers.  The show originally featured three scenes with fire, which consisted of a smuggler being shot while on a boat house dock and causing a gas pump to explode.  Next, a smuggler’s speed boat enters the boat house and it causes it to explode in a huge fireball.  This explosion was impressive, due to the large number of flame throwers and some firework pieces shooting off at the same time.

The original finale was the smuggler’s ship exploding in another huge explosion, with the boat partly sinking.  Finally, a few years after, the show finally got one of the most insane stunt’s to ever take place in a theme park: the flaming boat jump.  A custom built black Scarab boat would go at a high pace toward a gasoline platform that was on fire.  It would then enter the flaming platform, rise and then jump out the other side!  This incredible show suffered from the oddly shaped lagoon, which prevented guests from seeing all the show from one vantage point. It ended its explosive run in 2000.

In 1991, Village Roadshow (an Australian media company) and Time-Warner partnered to open “Warner Brothers Movie World” on the Gold Coast of Australia.  Located next door to the existing Village Roadshow Studios, it opened with a large selection of shows and attractions that showed how movies were made.  The attraction that interests us was a large production, the Police Academy Stunt Show.

Set after the movie serie timeline, we sat in bleachers facing the famed Police Academy where a new class of hapless recruits would go after two crooks.  Those crooks had just stolen the Payroll and with the help of a planted audience member (actually one of the show stuntman), we witness 20 minutes of live action similar to the movies.  One typical sight gag  is one recruit knocking over some parked motorcycles, causing the last ones to blow up.  Another spectacular combination of show action equipment and pyro is the exploding SWAT vehicle.  One of the crook drop a stick of dynamite in the park SWAT tank, which then explode and flip around in mid air.

The show final stunt was patterned after the finale of the Miami Vice Stunt Spectacular, using an helicopter that is shot down by a cannon.  The helicopter “crash” behind the academy and half the academy building on the left side blows up in an intense fireball.

The show was replaced in 2008 by the Hollywood Stunt Driver production.  A version ran from 1996 to 2004 at Warner Brothers Movie World (Bottrop, Germany) and another still run at Parque Warner Madrid (Madrid, Spain).

In 1991, Bellewaerde Park, near Ypres, Belgium introduced a new dark ride. Los Piratas was  built in the Mexico section and used a Mack Rides water dark ride for the ride component. Large sets with animatronics were designed and constructed by. Some scenes used the same fake fire originally used in the Pirates of The Caribbean at Disney, but one scene set in an Aztec/Mayan temple featured a fire breathing statue. The ride closed in 2012 and was replaced by a new indoor/outdoor roller coaster/dark ride hybrid.

As part of the push to promote the new for 1993 Batman Returns movie, Time-Warner introduced Batman Stunt Spectacular productions to Six Flags Great Adventure (Jackson, NJ) and Six Flags Over Texas (Arlington, TX) in 1992.  Using a large custom arena with covered bleachers, the original storyline was similar to the 1989 Batman movie, with the Joker and various henchmen as the villains.  Vicki Vale played a supporting role. 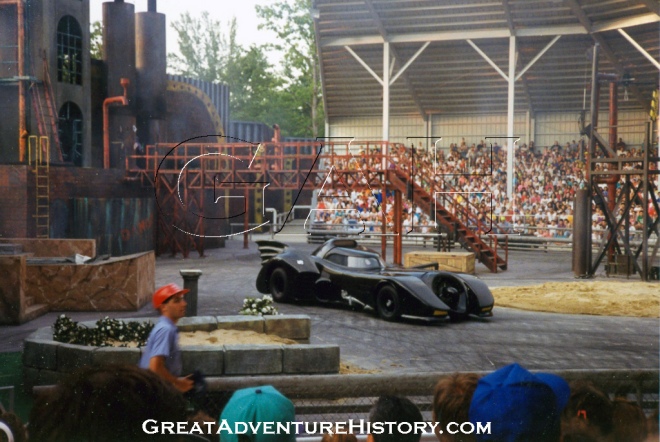 It was originally written and set-up to be a fake movie shoot, similar in that way to the Universal and Disney stunt shows, but after the first year, those elements were removed.  The show that played after was more realistic, as quicker transitions were introduced.  Fire was of course a huge part of those shows, with the top of Gotham City Hall blowing up and then the finale was a direct lift from the movie:  the Batmobile would rush toward Axis Chemicals, break through the wall and blow up the chemical factory in a large combination of fireworks and fire. 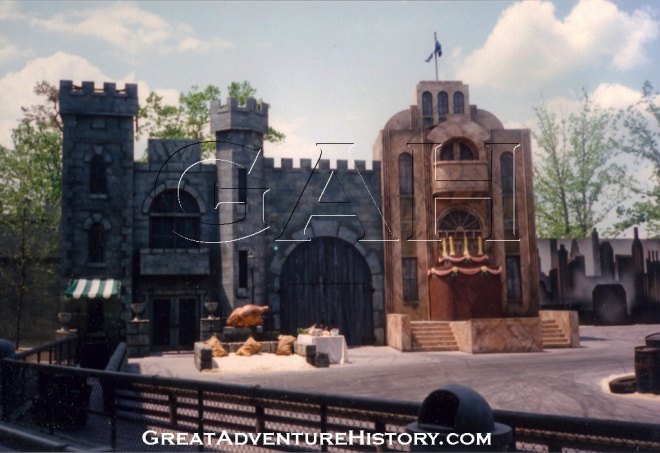 The Wayne Manor/City Hall side of the stage.  The Batmobile came out of the large wooden doors and the top of City Hall blew up at the same time as a stuntman did a high fall.  Photo appears courtesy of http://www.greatadventurehistory.com/

The Axis Chemicals/Nygmatech/Penguin Enterprises side of the stage.  Depending on who the villain of the show was, this set would be dressed accordingly.  This is where the show largest explosion took place.  Photo appears courtesy of http://www.greatadventurehistory.com/ 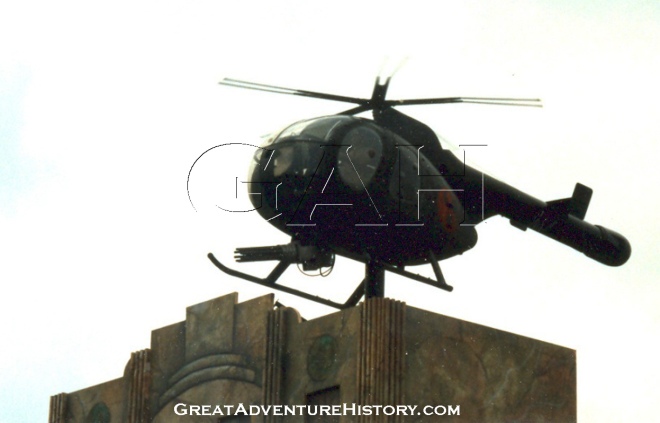 In 1995, the show changed to become the Batman Forever Stunt Spectacular and this large helicopter was a mechanical effect added to the show at that time.   Photo appears courtesy of http://www.greatadventurehistory.com/

Fire at night is always an incredible effect since the darkness amplifies even the smallest explosion.  In this awesome picture of the Batman Forever Stunt Spectacular, you can see the huge pillar of fire lifting up from the smokestacks.  Photo appears courtesy of http://www.greatadventurehistory.com/

Throughout the years, it was added to Six Flags other properties (Except La Ronde, Great Escape, Six Flags St-Louis, Wild Waves, European parks except Six Flags Holland and Belgium) under various forms.  At Six Flags Discovery Kingdom (Vallejo, CA) and Six Flags Astroworld (Houston, TX), there were water based shows.  At Six Flags Darien Lake (Darien Center, NY) and Six Flags Belgium (Wavre, Belgium),  it was indoor in repurposed building.  While at Darien Lake, it was a large soundstage that previously housed a roller coaster, it caused issues at Six Flags Belgium.  You had a small theater that previously showed a Sea Lion show and for the Batman Thrill Spectacular, they kept two pools of water and did not use propane or natural gas fire for the finale.  The area was too small and the only mechanical stunts were a double zip line and a motorcycle fight.  Pyro effect wise, you had nice green fireworks when the Riddler came out and the “finale” consisted of water splashing toward the crowd and two small fire charges on top of a podium.  It was very underwhelming and only lasted a single year, 2001.

The top of City Hall shortly before the stuntman jump and a large explosion comes off the top.  This was the Batman Stunt Spectacular at Six Flags New England (Agawam, MA) and the show took place from 2000 to 2006.

The Nygmatech side of the Batman Forever Stunt Spectactular at Six Flags New England.

The last Batman Stunt Show to take place at Six Flags Great Adventure was the Batman Vs. Catwoman: Catfight in 2004/2005.  The villains were the Joker with two goons and Catwoman fighting against Batman and Robin for the Cat Eyes rubies.  Catwoman want them because of the name while the Joker on board his suspended from a crane hot air balloon want them to power a laser weapon to destroy Gotham City.  In the finale of the show,  the Joker start destroying the stage, downing power lines and setting this building on fire with large and intense flames.  The Subway car on the left is a great effect.  Photo appears courtesy of http://www.greatadventurehistory.com/

Batman saves the day by using the laser weapon to rupture the water tower to put out the huge fire.  This was an interesting effect since Fire is usually used in short powerful blasts and not long sequences like this.  Photo appears courtesy of http://www.greatadventurehistory.com/