(Editor’s note:  we were originally going to combine Top Gun/Flight Deck with Batman: The Ride at Six Flags Magic Mountain, but given how picture heavy the article got, we divided them)

Over on the west coast, KECO Great America was happy with Vortex and was very curious about the new Batman: The Ride installation at their sister park.  B&M would not sell them a clone, but they went with the first custom layout that would take advantage of a large pond at the corner of their property.  The layout was to start with a 102 feet tall lift hill which is followed by the familiar dip and a curved drop to the left.  The train goes through the vertical loop and then into what became a signature B&M element:  a non-inverting banked helix that look like an inclined loop and this take the train through a compact 270 degrees turn that send the train back toward the station.  It then drops down into a Zero G Roll and after that, it rises over the waiting line.  It then goes through a small S curve before going to the signature sequence:  a drop into a Flat Spin over the bond followed by an intense helix where the train is banked at nearly 90 degrees over the water. We then rise out above the entry track and then turn to the right into the final brakes. 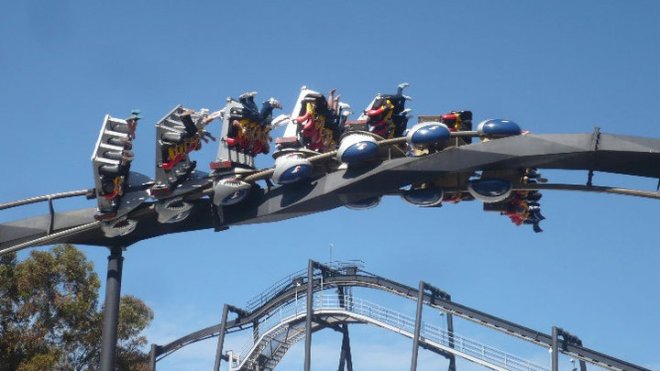 The train going through the Zero-G-Roll shot by Flex. 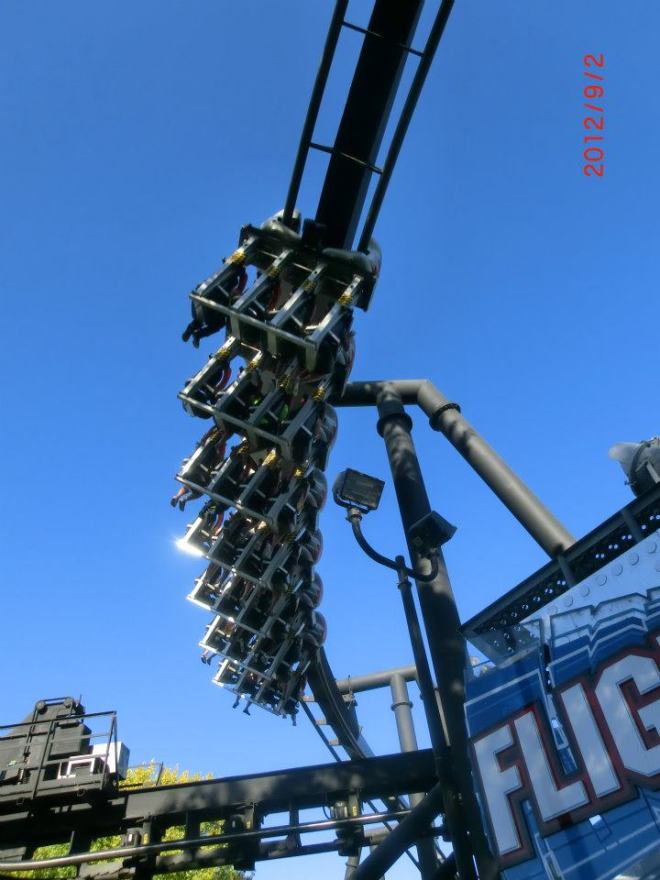 The S curve over the waiting line shot by Paul Shroeder.

The ride signature element by Flex.

Theming wise, the park went with painted murals and references to Fightertown USA since in between the ride order in 1992 and opening in March 1993, KECO was purchased by Paramount, who decided to leverage their intellectual properties.  The ride was originally rumored to have been called the “Raven”, which would have been perfect with the black track and supports, but Paramount went with Top Gun.  It was also the first Inverted coaster in the world with an uncovered station and also the first to feature shorter 7 car trains. In 2008, when Cedar Fair removed all Paramount intellectual properties from their parks, the ride was renamed “Flight Deck”. 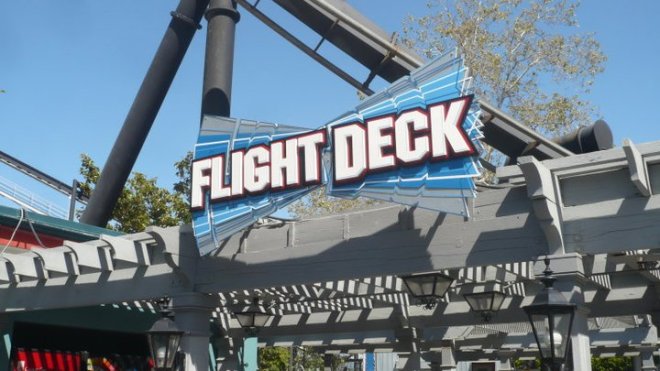 Flex provided us with this shot of the new Flight Deck sign introduced in 2008. 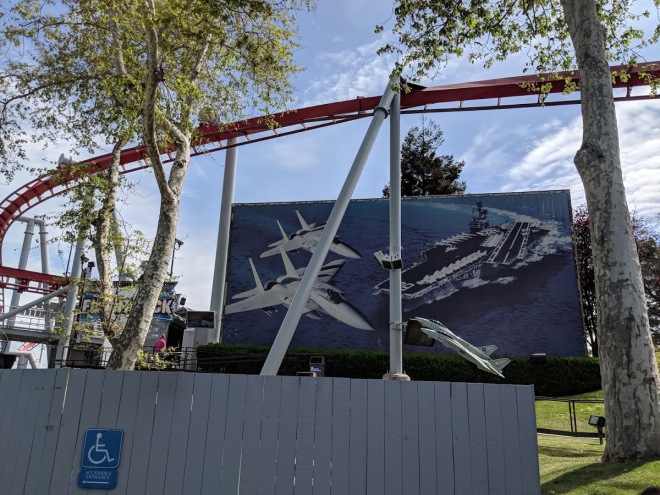 A look at the waiting line going by the navy carrier mural.  The station is built at the top of a hill.

For the 25th anniversary of the ride in 2018, the park had the ride operators wear aviator jumpsuits, reactivated the liquid nitrogen effect when a train was sent during the opening weekend and restored all the queue line theme elements.

The queue then goes by scenes that would appear inside an aircraft carrier.

Paul Schroeder provided us with this great shot of the loading station on Flight Deck.  Notice how it has no cover. 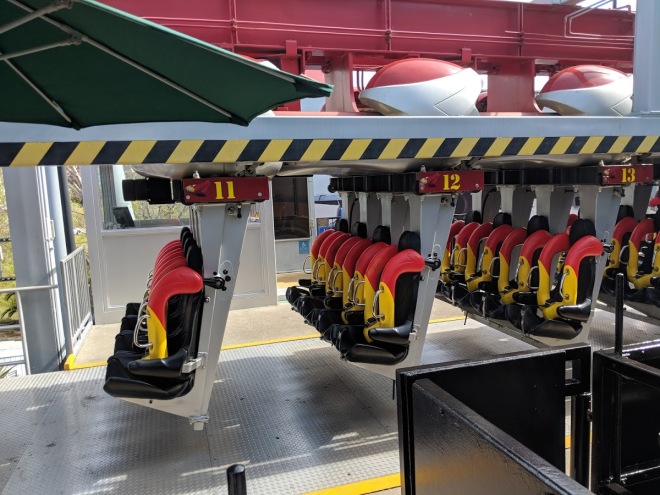 As part of the 25th anniversary, the trains were repainted and the new shoulder restraints equipped with shorter seatbelts.

Both Batman: The Ride at Six Flags Great Adventure and Flight Deck introduced a new lift style where the motorized platform was eliminated in favor of a double staircase and metal floor in between.  To give a more secure evacuation point, there are at least two metal platforms park workers can place under the car so that the drop for riders is not too severe.

Flex shot this picture of the lift. 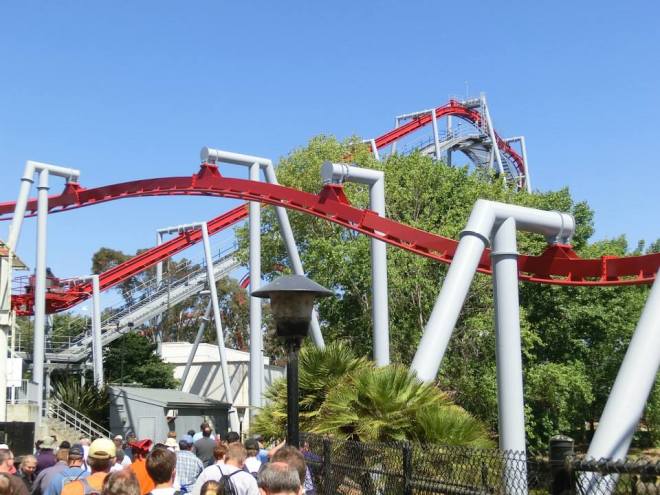 In 2014, Cedar Fair repainted the ride to red track and silver supports.  Paul Schroeder shot this picture in 2014.

A look under the lift hill showing the catwalks and metal floor. 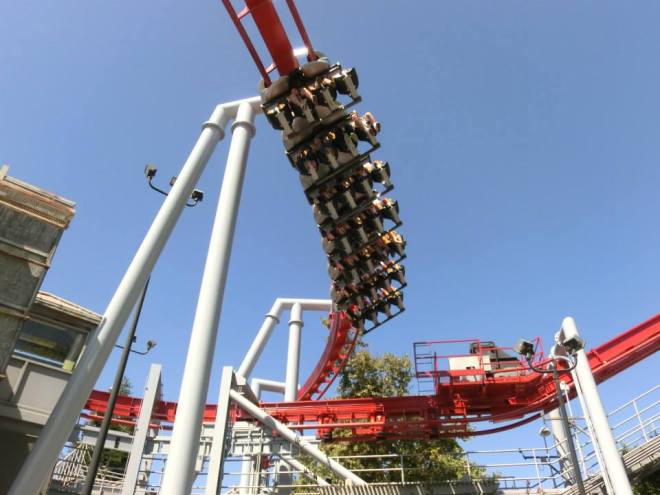 Paul Schroeder shot this picture of the train going over the lift hill.

In 2018, Park Vault visited the park and some of the more recent photos with red track was shot by us.  The following photos show the ride layout from unusual locations.

The train going through the Vertical Loop, from the sky ride.

The loop again, this time from the ground.

The train going through the elevated turn.

The elevated turn, shot from the Pavilion entrance to the park.  This would be the opposite side that people normally see.

The train about to rise up into the Zero-G-Roll.

The Zero-G-Roll from the Sky Ride.

A look at the entrance and mural fly-by from the Sky Ride.

One thought on “Top Gun on the West Coast: Part 2 of our Inverted Coaster series”

Did you know Moonsault Scramble had two trains? Learn more about #moonsaultscramble , the record breaking roller coaster that #takabisha in the photo replaced. @fujiqhighland. @premierridesinc and @intaminofficial are also mentioned in this article.
https://parkvault.net/2021/02/21/the-american-eagle-soars-above-great-america-part-7-of-our-look-at-the-worlds-tallest-roller-coasters/
In our latest article about the world's tallest #rollercoaster , we look at #japan
We have just updated our first article about #riverrapids featuring @intaminofficial #thunderriver at @sixflags sadly missed #astroworld theme park in #houston . Thank you to Bev D. II Hartwood for the construction photos, one of which is shown here.
Who remembers the short lived Cinderellabration show that took place at the Magic Kingdom in 2005? It came from @tokyodisneyresort_official @waltdisneyworld @#magickingdom @disneyparksblog
Old pins from @disneyland #disneyana #disneymerch #disneypins
Loading Comments...
Comment
×
%d bloggers like this: