Six Flags Magic Mountain had for the longest time a city themed area in the back of the park and it housed a varied selection of spinning rides along with an underage night club at one point.  When the decision was made to import Batman: The Ride to the park, the park saw the Back Alley area as the perfect location.  Space wise, the ride would have to go behind a cement channel (used when it rains to transport the rainwater away from the park and avoid damage) and this in fact lead the park to design a brand new Gotham City Park queue line to accommodate the fact the ride would be set back further than at other locations. The park also took the decision to build a large extended queue to the left of the entrance to further accommodate the expected record crowds that would descend toward the park.

The large extended park queue.  The path on the left lead to the old extended queue.

The lush atmosphere is incredible and provides a welcome break from the Southern California sun.

By 1993, the “Back Street” area had a Mack Musik Express called the Subway, a Hrubetz Round-Up called the Turbo, a Schwarzkopf Enterprise called the Reactor and the center piece:  an Intamin Looping Starship called the Z-Force.  The park decided to transform the Back Street into the Gotham City Backlot and repurposed and redressed all the existing fake buildings and facades around the area.  The Subway became the ACME Atom Smasher and the Turbo “Gordon Gearworks” until 1998.  In 1999, it was renamed again to “Grinder Gearworks”.  Both rides received a dirty gothic makeover to make it fit with the new style where it appeared the area came straight out of the 1989 Batman movie.  Guido’s Pizza became The Pizza Vector and also received an appropriate aging appearance.  Reactor was replaced by the new extended queue for Batman: The Ride and Z-Force was replaced by Gotham City Park. 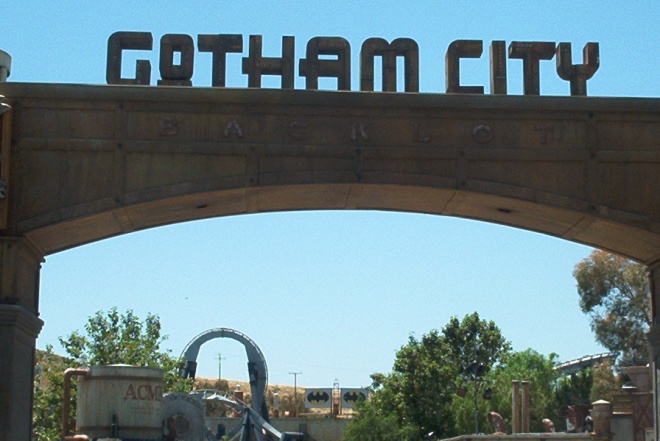 Welcome to the Gotham City Backlot!

The ride had a very industrial look with chainlink fences.

During our 2005 visit to Six Flags Magic Mountain, Atom Smasher was getting work and was not operational. 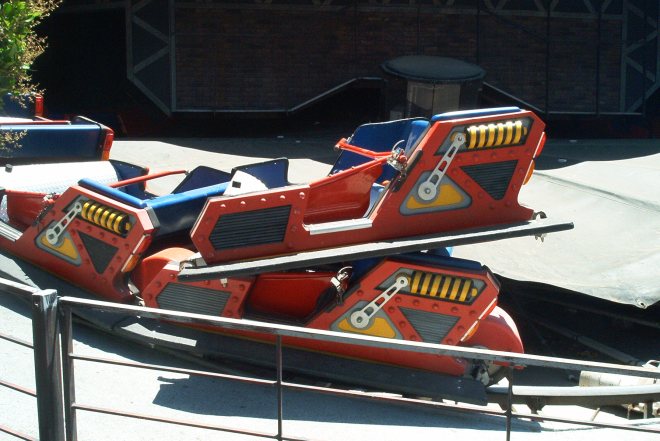 The Atom Smasher cars don’t have automatic restraints.  Instead, they use manual locks.

With all the space they had to play with, the park went all out with the decaying atmosphere and the ride station building shows:  it is a more elaborate version of the Gotham City Public Works building seen elsewhere and when the ride opened, the two smokestacks were functional and let smoke out.  In addition to the crash police car, there was also a flipped pick-up truck that was covered in bullet holes.  The atmosphere is utterly depressing and truly made us feel like we were in the middle of crime alley and that the Joker or one of his goon could pop out of a corner at any time.

The Gotham City Public Works Power Plant that serves as the station.

Some of the Skid Row theming seen after the Gotham City Park.

The atmosphere was incredible and at night, it felt like you were in the middle of Gotham City near Crime Alley. 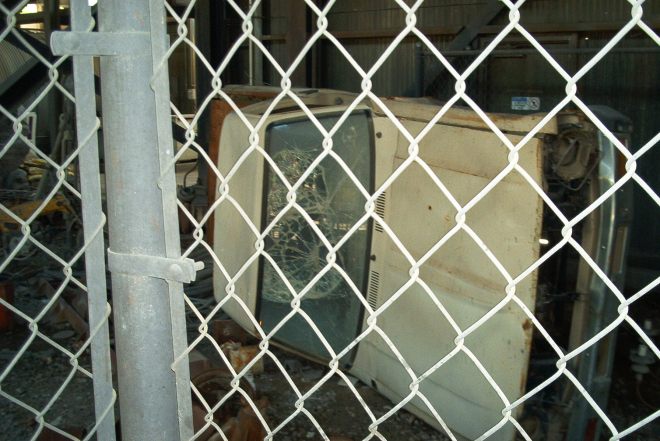 The Joker’s goons were so efficient even this pick-up truck did not make it.

By the time we visited in 2005, the Police Car was missing, but the hydrant was still present.

After the extended Skid Row queue, we enter this storm drain access.

The Storm Drain leads to the indoor portion of the queue and the giant fan is at the back. 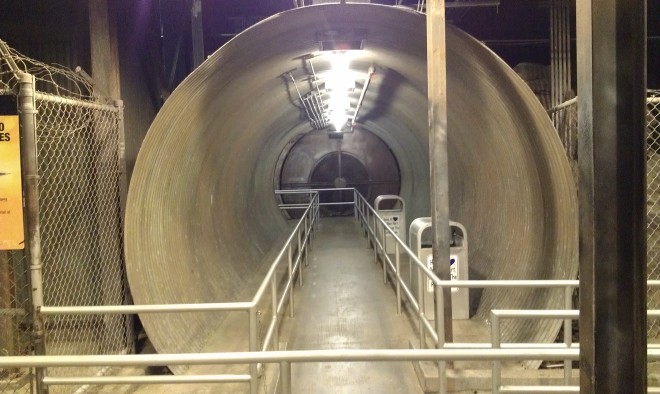 The Storm Drain without any guests in it. 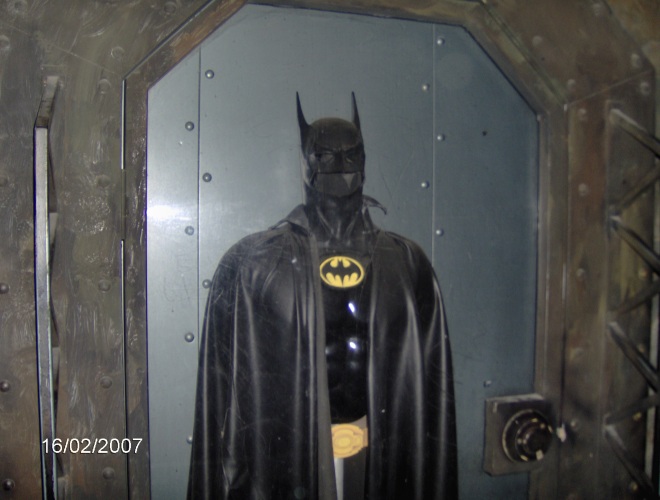 The armor in the safe in the back of the Batcave.

The Batman logo in the Batcave. 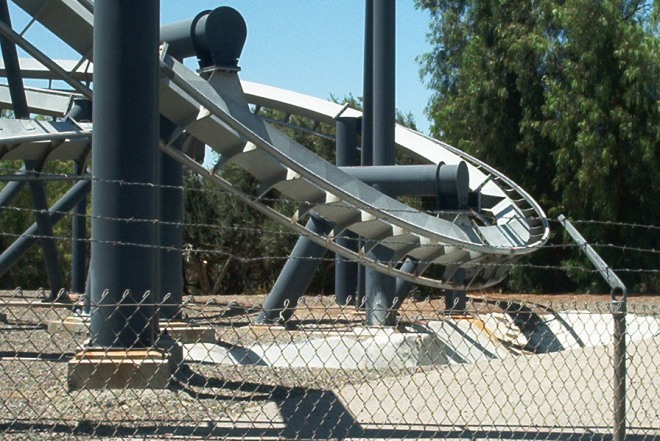 The ride in its original colors.  This is the ride final turn and a trench was dug up for clearance.

The train exiting the Zero-G-Roll. 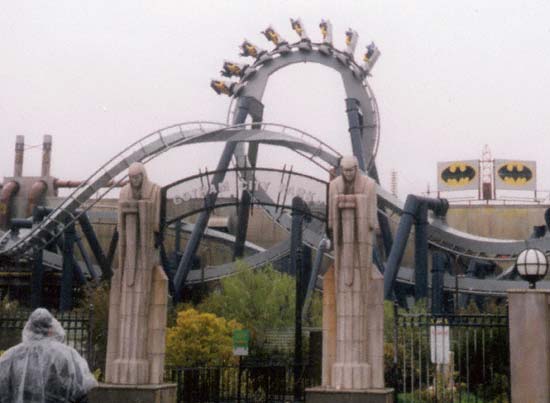 www.negative-g.com provided us with this great shot of Batman: The Ride going through the loop and the Gotham City Park entrance up front.

The train in the first Flat Spin.

In 2010, the ride also received new colors where the previously grey track was painted dark blue and the black supports received a fresh coat of paint.  This was in preparation for the transformation in 2011 of the Gotham City Backlot into the DC Universe.  After 16 years, what was intended to be dark and depressing had gone beyond that and it felt we were walking in a soon to be demolished corner of the park.  This did not help ridership at Batman: The Ride, Atom Smasher barely worked and the ride needed a full refurbishment if it was to continue operating to the public.  Grinder Gearworks also needed a lot of work and the park decided to redo the whole area and those two rides.

The ride look really good in Blue and Black and it fits the new DC Universe better. 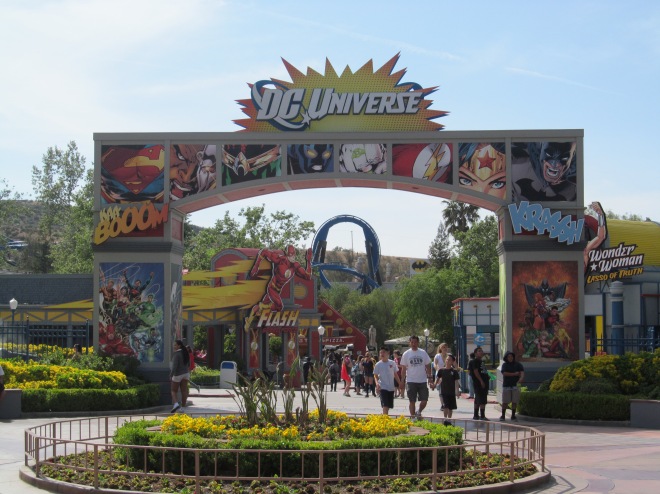 The trees around the ride have grown in and blends in well. 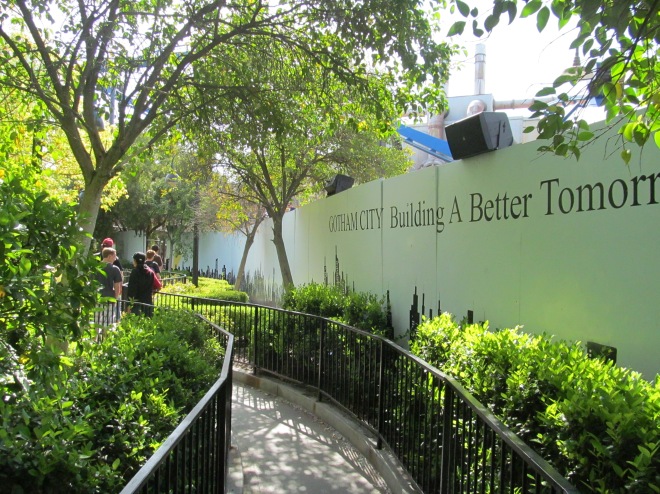 The waiting line was also cleaned up and set elements repaired or replaced.

The fountain look really good and looking at the two guests on the right, attract a lot of attention. 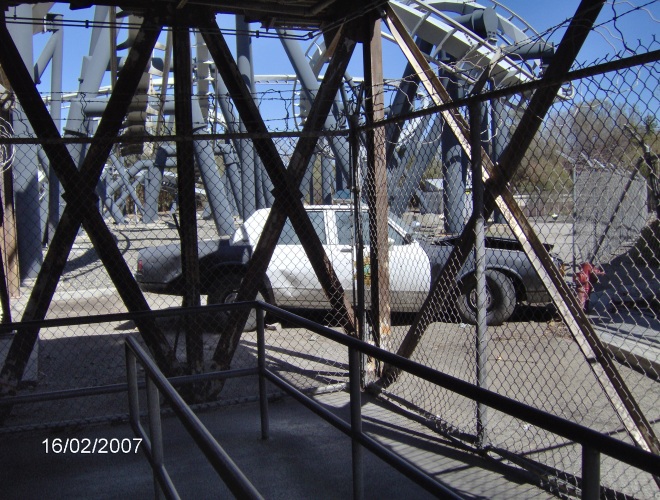 The police car returned to the park in 2007. 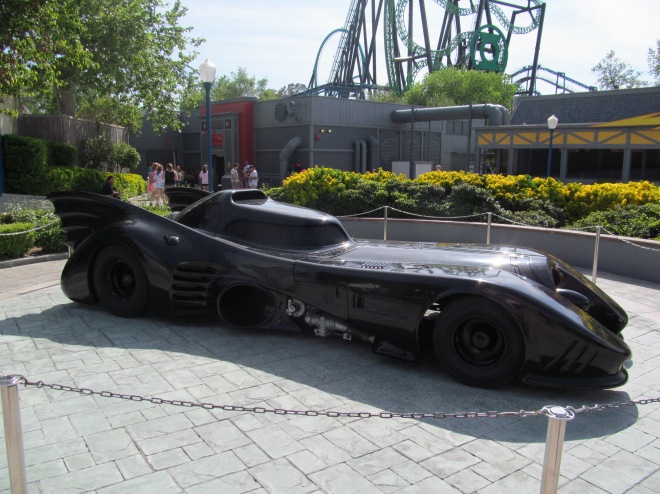 The author standing next to the Batman: The Ride sign.

Atom Smasher was fully rebuilt and received a bright red color scheme along with a redecorated building.  Now called the Flash:  Speed Force, this gave the ride a new lease on life and finally allowed it to reach its potential as a family friendly thrill ride.  Grinder Gearworks exterior façade was repainted and the ride repainted in a beautiful color pattern for its new namesake:  Wonder Woman:  Lasso of Truth.  In addition to that, all the facades and The Pizza Vector received new looks that is full of references to the extended DC Comics universe.  For example, a phone booth outside an apartment building has a suit and Fedora hat inside… maybe a famous reporter forgot them?  The bar near that phone booth also has a hidden reference to the famous “Killing Joke” comic book that depicts the most popular Joker origin story.  The Pizza Vector became the Teen Titans Pizza Tower and this immediately made the counter a more inviting place to have a slice of pizza. 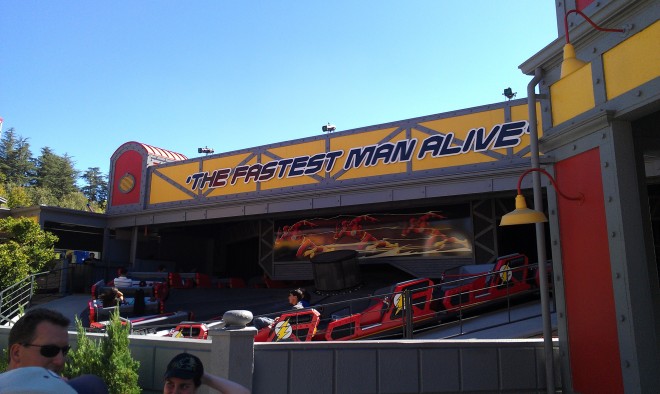 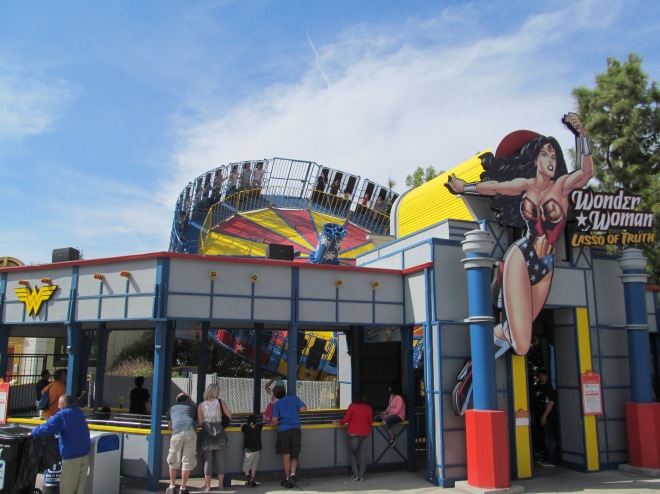 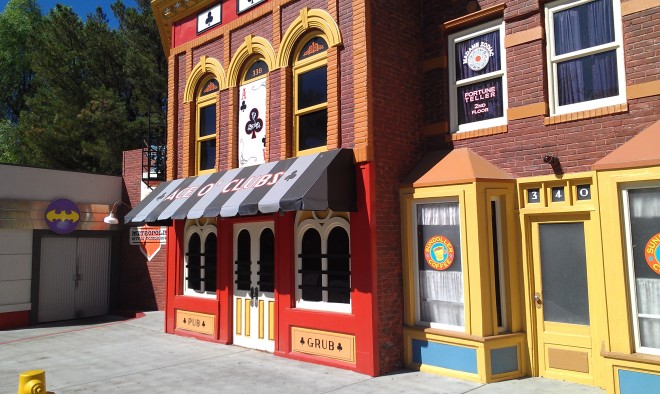 The Ace O’ Clubs from The Killing Joke.

Another part of the DC Universe facades.

The Phone Booth with a forgotten hat and coat.

Those facades were part of the Extended Queue and when Green Lantern: First Flight opened, they were rethemed to Coast City, home of the Green Lantern. 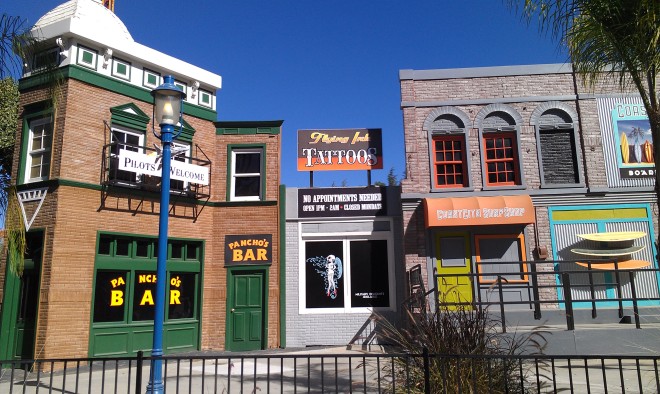 A bar and tattoo parlor in Coast City.

The biggest change to the area came to the old extended Queue Line:  it became the location of the Green Lantern:  First Flight, an extended Intamin Zac-Spin. 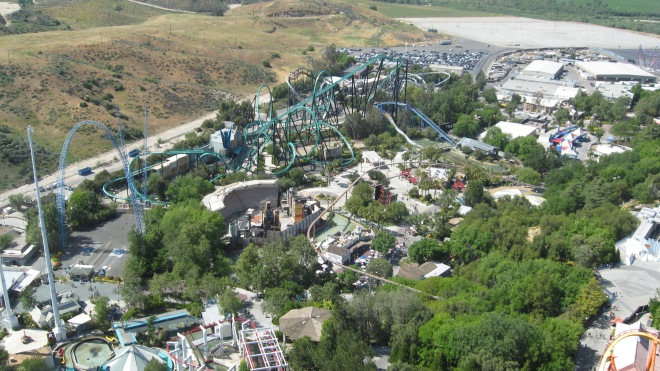 We conclude with a picture shot from the Sky Tower and showing Batman: The Ride behind the green Riddler’s Revenge.