In the early 1990’s, after introducing Magnum XL-200, the first full circuit roller coaster to break the 200 feet barrier,  Richard “Dick” Kinzel, president of Cedar Fair, was looking for the next large attraction to introduce at Cedar Point.  Mean Streak, a giant record breaking wooden roller coaster was not the success they expected and the ride was proving to be quite problematic maintenance wise, which lead Mr. Kinzel to want a more reliable and cheaper to operate roller coaster.  He took a ride on Batman: The Ride at Six Flags Great America and immediately made up his mind and set plans in motion to introduce one at Cedar Point.

Flex provided us with this picture of Mean Streak, a large meandering wooden roller coaster that was not the expected success the park hoped for.

Now, for the location in his park, there was a perfect spot near the main entrance, but it would require a lot of work and the removal of a few rides.  The Mill Plunge log flume, the world’s second oldest flume ride in the world was removed and the site cleared and levelled.  Next, the Midway Carousel and Calypso (Schwarzkopf Calypso) were relocated elsewhere in the park and this gave a large L shaped plot of land that B&M could use to maximum efficiency.  For the name, “Raptor” was chosen since the ride would look like a giant bird of prey swooping toward the ground and capable of graceful maneuvers.  The ride was painted in two shades of green.

Richard Bannister provides us with this picture of the entrance of Raptor. http://www.themeparks.ie/

The end result was a 137 feet tall lift hill placed at the bottom of the L and a 119 feet curving first drop to the left at a 45 degrees angle.  This was a world record for Inverted Coasters at the time and was a nice marketing edge against the various other Batman: The Ride that was starting to appear around the country.  After the first drop, the train went around the 100 feet tall vertical loop and in a straight line, immediately follows with a spectacular Zero-G-Roll.  A flat track segment near the ground allows us to appreciate the feeling of speed before the train is flipped around in the first “Cobra Roll” on an Inverted Coaster.  The Cobra Roll consists of a half loop, half corkscrew, another half corkscrew and finally a last half loop to send us back toward where we came from.  Given the element height and facility to place along a course, it became a favorite maneuver for B&M to use when they needed to turn the train around at the edge of a layout.  Cedar Point installed using lighting at night where the Cobra Roll would be lit by floodlights until a train approached it.  They then turned off, strobes went on while the train went through it and then the floodlights would slowly turn back on.

Flex provided us with this picture of the first part of Raptor with the first drop and loop. 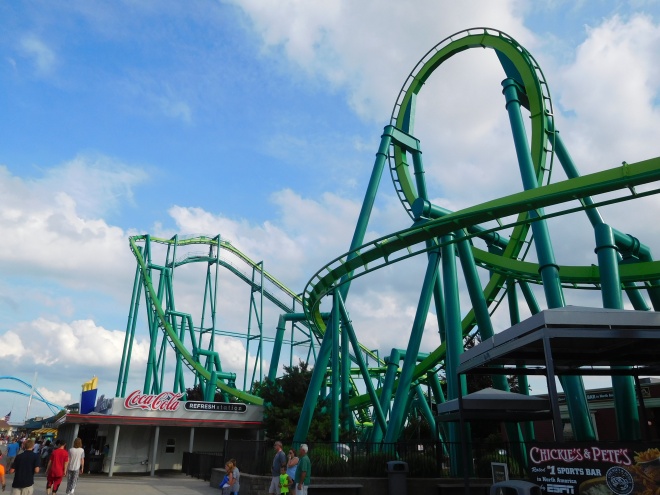 Another view of the first drop and Vertical Loop.

One of the park main path goes right under the first drop.

The train coming out of the Vertical Loop. 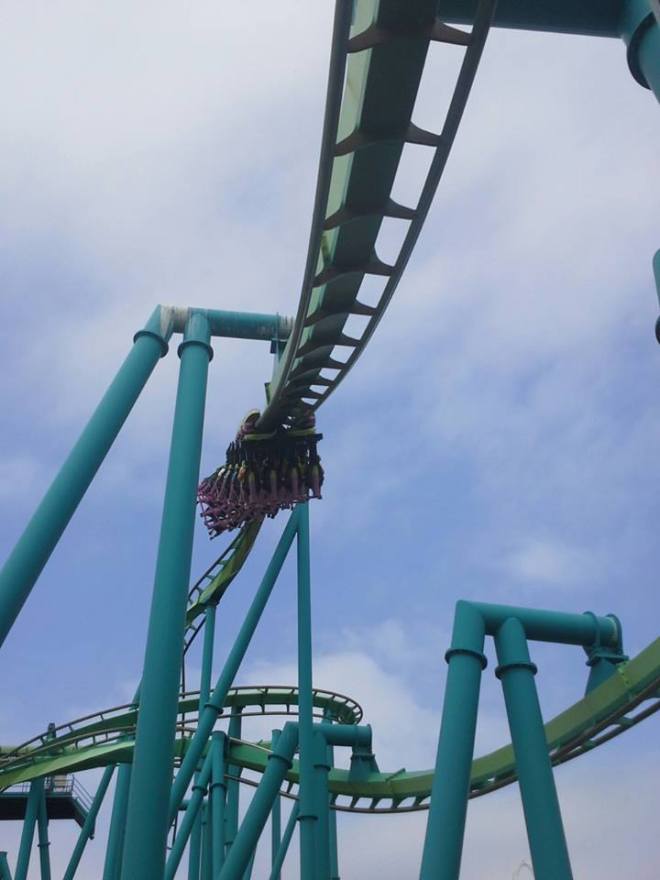 The train going through the Zero G Roll.  Flex.

David Stepanek provided us with this great shot of the Zero G Roll as viewed from the side.

The Zero G Roll.  This picture shows how twisted the maneuver is and is a testament to Bolliger & Mabillard engineering and fabrication. 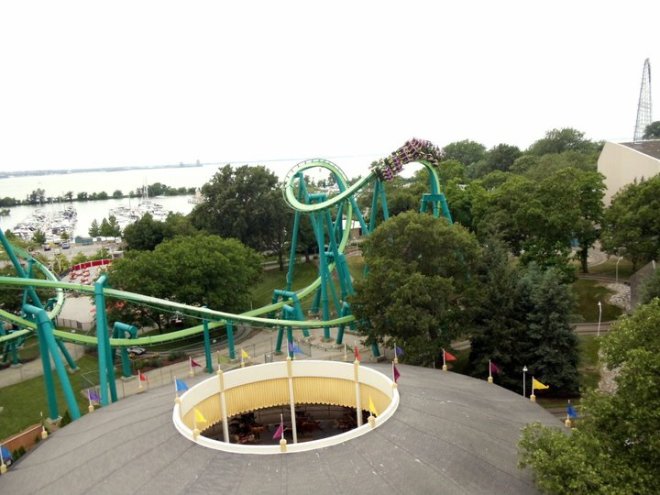 David Stepanek took this shot of the Cobra Roll.  The train enters on the left and exit on the right.

The back of the Cobra Roll.

After the Cobra Roll, the train rises into an elongated S curve and turn sharply to the left into the block brake.  This was necessary since Cedar Point wanted 3 train operation and they had seen how long the lines were at Six Flags.  Also, the ride was to be 1000 feet longer than Batman and the third train was necessary to maintain capacity.  The Block Brake is high enough to not have to slow the train sharply and the train dives down to the right into a sharp drop that is followed by an elongated Flat Spin.  The train then lifts up into another S curve which takes us right over the waiting line and this is a set up for the last Flat Spin.  The ride then drops down into a tight downward 360 degrees helix and then rises up to the left into the final brakes. 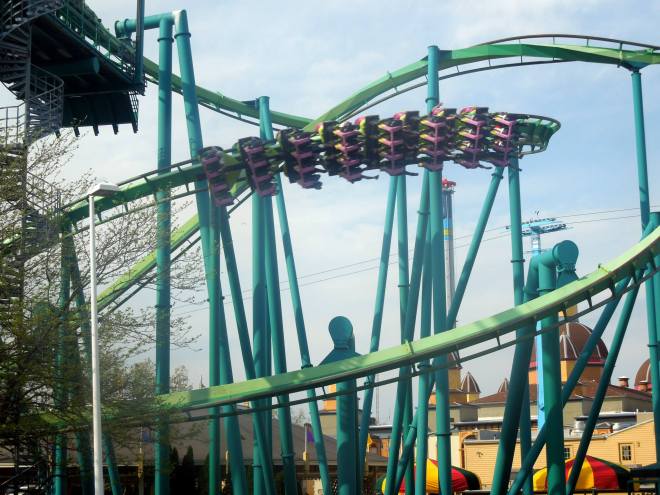 The spiral that leads to the block brake.

Nolan Thiele took this shot of the train going through the elongated first Flat Spin. 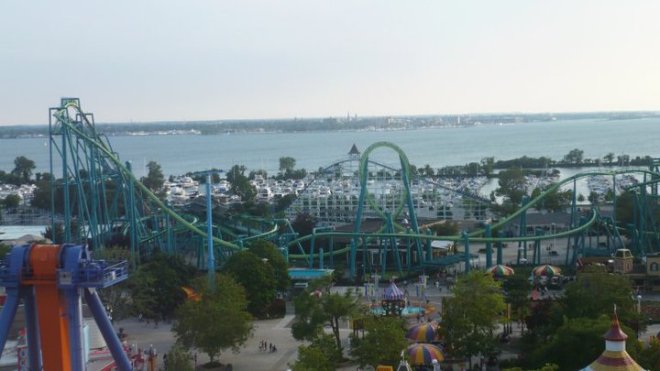 In this overhead view of Raptor, you can see the long straight piece of track between both Flat Spins.  Flex.

The final Spiral and the lift hill. 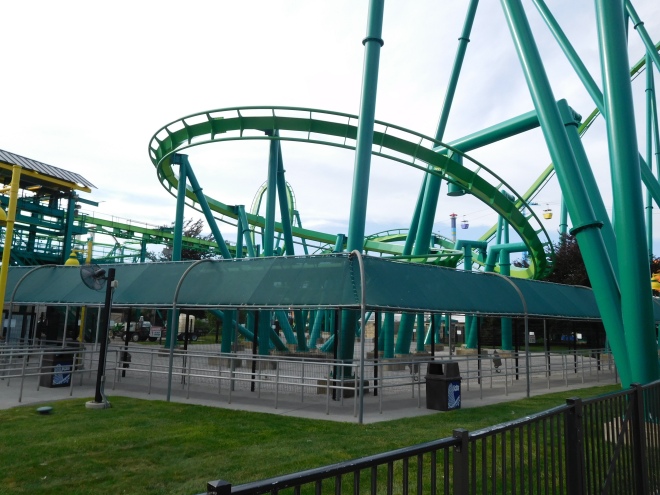 Another view of the Spiral and the waiting line.

The highly banked Spiral, shot from the waiting line.

The ride entrance is located under the top of the lift hill and then goes along a long path that takes us in front of the station.  There is a huge queuing area there and after going under the station, we encounter yet another massive queue area.  The station had a new feature since it would be the first Inverted to not have the lift hill after the station and with the train dipping to the left before rising into the lift bottom, B&M was afraid to have to guests in the front row fall down to the ground.  The solution was to install a metal gate that serves as fall protection for guests and employees and when the train is dispatched, it lowers at the same time as the floor and let the train through.  When the floor is raised for the next train, the gate raises at the same time. 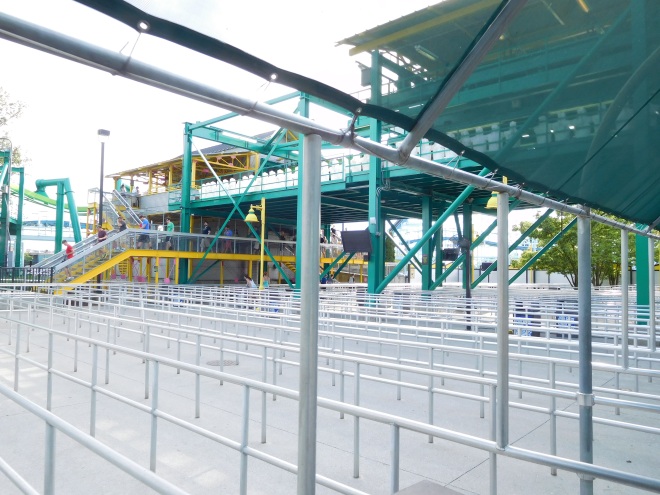 The first part of the massive waiting line.

The second part of the waiting line.

This ramp leads to the waiting line and the merge point with the Fast Lane entrance.

The station design was quite futuristic and had many unique light fixtures and decorative elements.

The exit side of the station.

The entrance side of the station.

The lift hill share something with the prototype Batman: The Ride and it features something B&M had only done once before on an Inverted:  an open lift hill.  The next Inverted Coaster customers went back to the fully enclosed lift, but this great idea did not die:  B&M recycled it for the Flying Coaster that debuted in 2002.

The start of the lift hill.  Pusher tires at the pace slow the train down and feeds the train into the chain. This reduce wear and tear on both the chain and train since both are going at the speed. The moving evacuation platform is grey and visible on the picture.

The lift hill with the single walkway.  Picture by Richard Bannister.  http://www.themeparks.ie/ 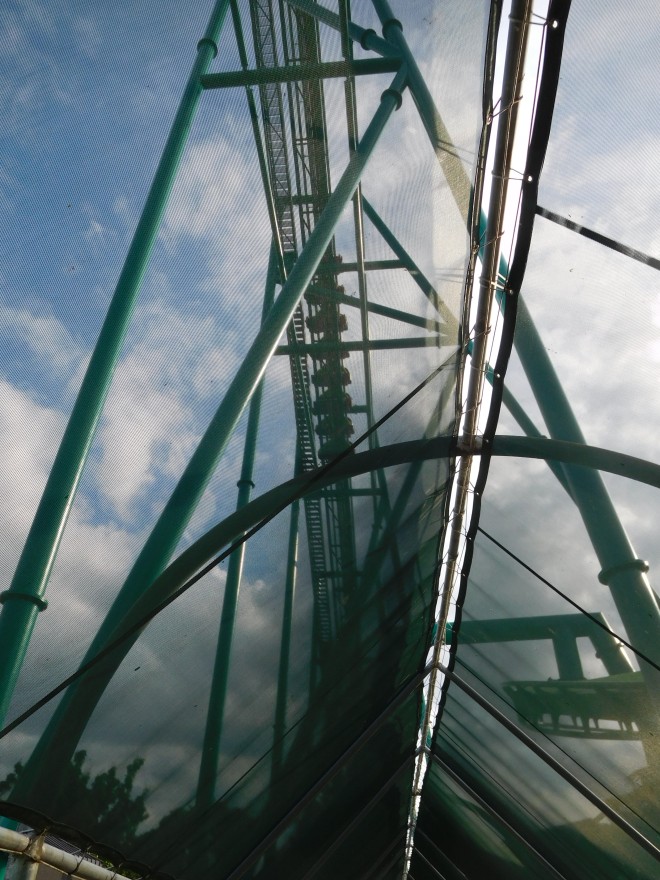 Since there is nothing under the lift hill, the park installed nets to prevent loose articles from dropping on guests in the waiting line.

The ride was extremely efficient at moving the huge lines with the 3 32 passenger trains and even then, the lines were extremely long, reaching over 2 to 3 hours.  To give you an idea, this represent over 3000 guests in line and with a roller coaster capable of moving 600-700 guests an hour, that would be a 5 to 6 hours line. 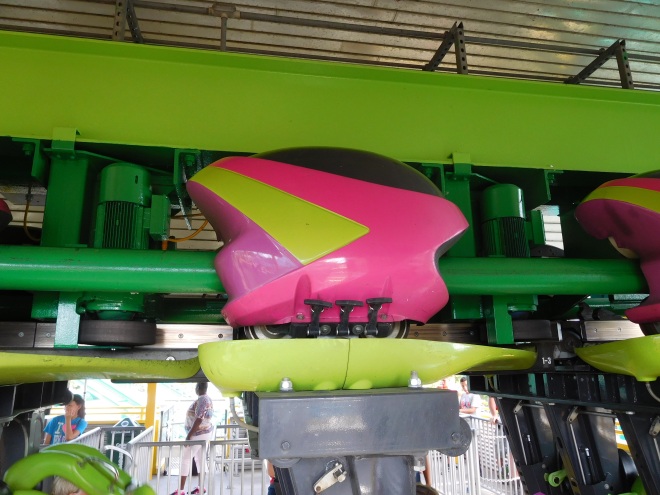 The brightly colored wheel cover. The black handles secure it in place.

The transfer track, with room for 3 trains.