Six Flags purchased two attractions from Proslide for their Six Flags Fiesta Texas (San Antonio, TX) and Great Escape (Queensbury, NY) parks.   Bonzai Pipeline is a pair of Twister body slides that will share the Alpine Freefalls tower.  An extension at the 32 feet level will be built and the new slide will use the space between the Cliffhanger slide and the Wave Pool for its path.  Each course is different and will feature a spiral along its 280 feet and 268 feet paths.

Thunder Rapids is the first RocketBLAST/FlyingSAUCER hybrid installation in the USA and the third in the world.  It is replacing the Hill Country Racer mat slide near the main entrance of the park, along the parking lot.  It is the longest of the three at 942 feet long and it will feature 5 uphill segments along with four FlyingSAUCER turns.  One great feature is that Six Flags opted for ground loading and the main conveyor belt was designed to accommodate riders.  It make the ride fully accessible, something that is unfortunately still rare, but is slowly coming to water parks as we will see in the next installation. 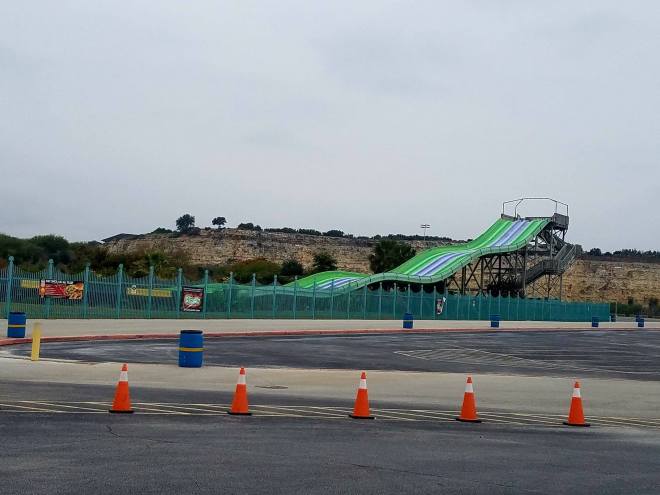 Our friend Flex provided us with this picture of the now removed Hill Country Racer. As you can see, Thunder Rapids was installed near the parking lot and drop-off area. 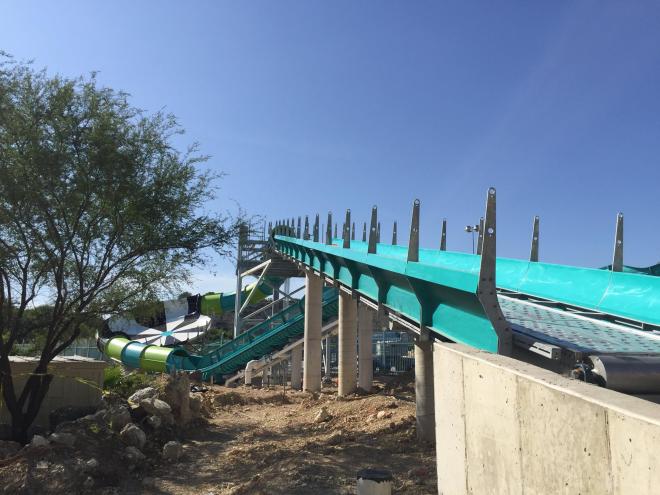 That other attraction is Miss Adventure Falls, a new PowerRiver Raft Slide that opened to the public on March 12th 2017 at Typhoon Lagoon (Lake Buena Vista, FL).  The ride course is family oriented and as such, it use 4 passenger round rafts with high sides that allows the ride to operate with no minimum height restrictions.  The two innovations come from the ride along conveyor belt that take rafts to the top, something that allows loading in a shallow river at the bottom and make the ride ADA compliant.  Next, thanks to that conveyor belt, the ride advanced control system allows incredible capacity with rafts dispatched every 20 seconds or so on the lift. 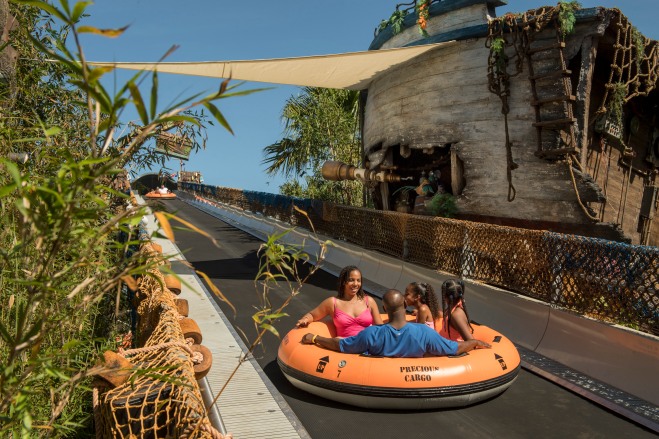 Walt Disney World provided us with this picture of the long conveyor belt that take the rafts to the top of the attraction.  Notice the theming elements added to the raft and you can see the wrecked ship we pass by on the lift hill.

The theme of the attraction ties in with other Disney attractions around the world: Captain Mary Oceaneer is a member of the prestigious S.E.A, the Society of Explorers and Adventurers.  Created for the Fortress Explorations attraction at Tokyo DisneySea (Urayasu, Japan), the idea grew and now ties together various venues at Disney parks around the world.  For example, Harrison Hightower III, who went missing at his Hightower Hotel in New York after a freak accident, was one of the founding member’s.  Further references appeared in 2015 when the Skipper Canteen restaurant opened at the Magic Kingdom.  Owned by Dr. Albert Falls, the Canteen serves as the main restaurant for guests exploring the nearby Jungle Cruise and it is filled with S.E.A references.  The library is absolutely incredible in that aspect with references to every Disney resorts in the world.  Captain Mary Oceaneer is a member known for being an incredible deep sea diver and along with her dive partner, Duncan, she has explored the Seven Seas. 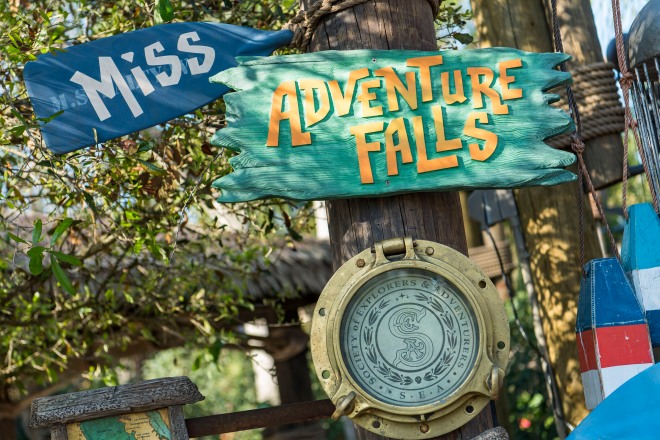 The entrance sign to the attraction and you can see one of the reference to the S.E.A. This picture appears again courtesy of Walt Disney World.

Two themed elements are present on the lift; first, we pass by Captain’s Mary Oceaneer wrecked ship where her pet parrot, Duncan, talk to us.  Next, we go under a rickety crane where a crate full of cargo creaks over our head.  The ride portion starts with a dark enclosed spiral that ends with a water curtain and then, water is injected in the flume using Proslide water injection system to bring the raft to its optimal speed for the rest of the course.  The flume then twists around a stone statue and head back in darkness for a short covered segment.  Another water curtain at the exit hides the last theme element: a stone vase that is tipped over and serves as an imaginative waterfall feature.  The ride then concludes with a last curve in the splashdown pool. 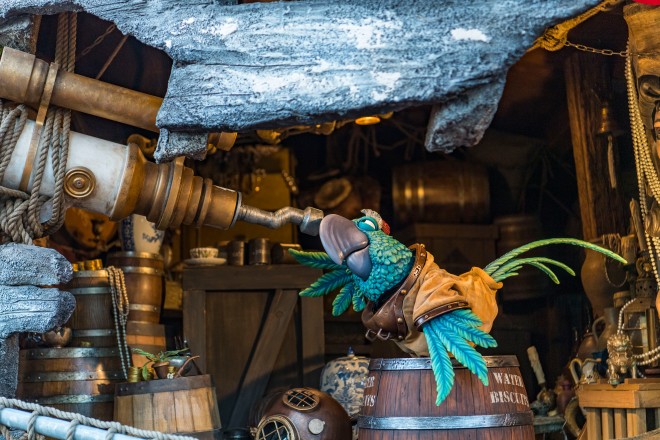 Walt Disney World took this incredible picture of Duncan, in his audio-animatronic form, when we pass him on the lift hill. 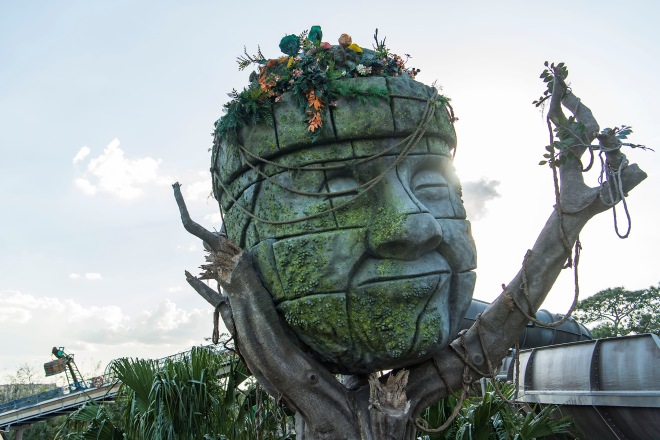 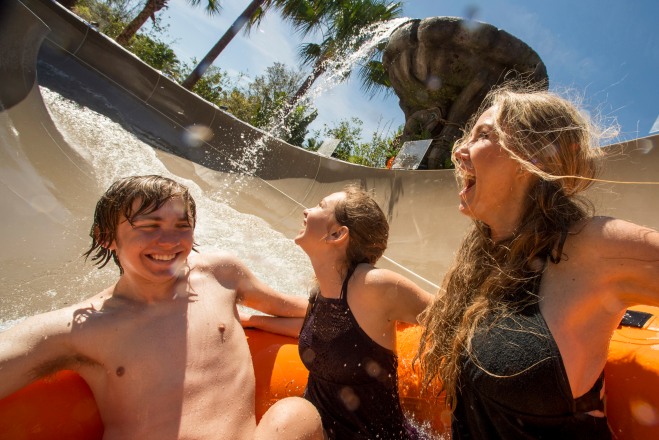 In this action shot taken by Walt Disney World, you can see the stone vase that drops water into the flume. 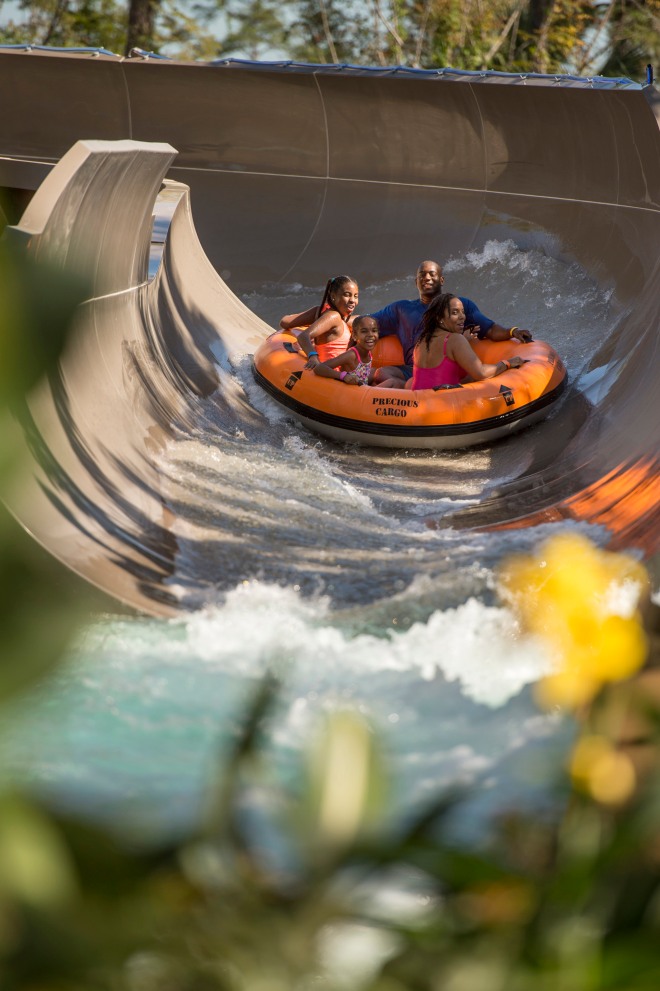 The last curve of the attraction, again provided by Walt Disney World.

Waldameer Water World in Erie, PA is expanding their water park again in 2017 with a new RideHouse 500 water play structure from Proslide.  The chosen name was “The Battle of Lake Erie”, named after an historical naval battle that helped secure Lake Erie and allowed the United States Navy to regain control of the Lake and liberate Detroit, MI.

The park is honoring that battle with a custom RideHouse that will feature seven water slides and over 110 water features.  One of the slide will be KidzBOWL 14 and along with the main splash feature, it will feature a second off to the right side of the slide.

Waldameer Park provided us with this great concept art of The Battle of Lake Erie.  You can see the KidzBOWL 14 in green and the second water drop feature on the right.  Waldameer Water World for more information.

Located in the Pasir Ris area of Singapore, Downtown East is a multi-use resort that features Dining, Shopping and an integrated water park called Wild Wild Wet.  They successfully installed a pair of Proslide SuperLOOP with SkyBox launch capsules a few years ago and in 2016, they started construction on a large expansion north of the Lazy River, next to the Wave Pool.  Previously occupied by restaurants, Proslide designed an expansion with a 4 Lane KrakenRACER, one TurboTunnel and one FreeFALL as part of a single Custom Complex.  The park’s new signature attraction is the Royal Flush, the first BehemothBOWL 40/TornadoWALL 60 Hybrid slide in Southeast Asia. 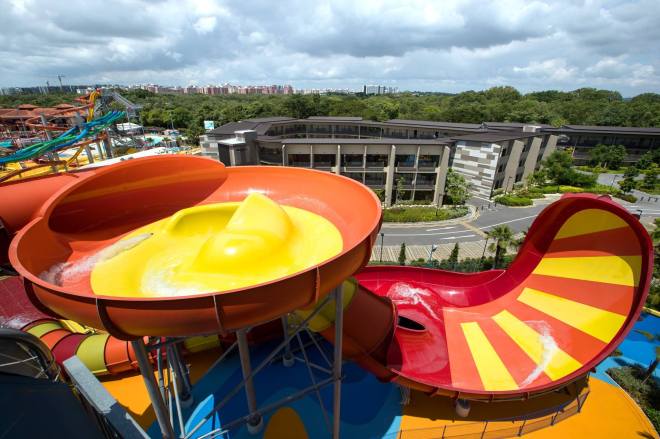 Proslide recently posted on their Facebook page this amazing picture of the completed Royal Flush. 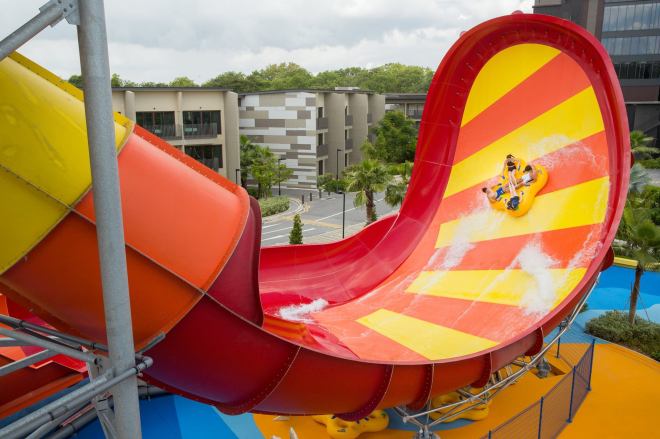 In this other dramatic picture from Proslide, you can see one of the slide’s raft in the middle of the Wall element. 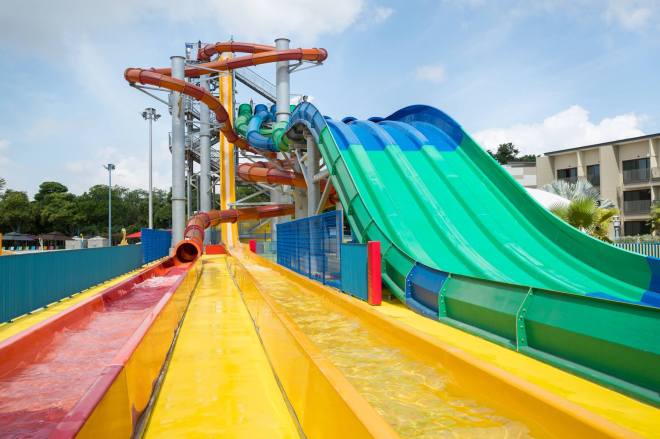 The custom complex, again courtesy of Proslide.  Both the FreeFALL and TurboTUNNEL don’t feature SkyBOX in order to differentiate them from the existing SuperLOOP slides installed in the past at the park. 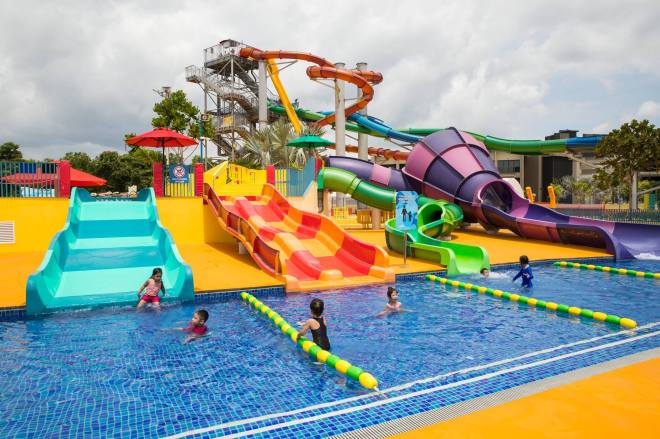 Alongside all those thrilling attractions, a new family area called the Kidz Zone featuring a Kidz Tornado as its premier slide was built.  This picture again appears courtesy of Proslide.