In this article, we are looking at two projects Aquatic Development Group and WhiteWater West Industries LTD partnered on a second phase at the Gaylord Palms in Florida and a new park in the Outer Banks region of North Carolina.

The Gaylord Palms is a popular resort and convention center in Kissimmee, FL near Walt Disney World.  It opened in 2002 and Aquatic Development Group (ADG), the designers and builders of the original resort water park, was once again chosen to design and build the second phase of the South Beach/Cypress Springs recreation areas.  A double FlowRider was selected to be the centerpiece of the expansion with a slide complex designed around it.

ADG provided us with this great picture where you can see the new expansion and to the left of the existing area with the Treehouse.  Aquatic Development Group

The first phase included a 4 slide WaterFortress called The Tree House, so the 3 new slides were selected to compliment it.  The location was landlocked, so they used up part of a parking lot to expand the Cypress Springs water park.  Between the South Beach adult pool and Cypress Springs family pool, the Wake Zone was installed.  This was the name given to the double Flowrider and its location is quite strategic, as you can have adults only activites on one side and on the other, families trying flowriding for the first time.

The 3 slides are based off a single tower called Big Cypress and were supplied from WhiteWater West Industries LTD.  Two family friendly spiraling body slides were installed on the lower level as the Tamiami Twister.  The headliner attraction matches up nicely to the many other water slides in Orlando is called the Florida Free Fall.  Starting with an AquaLaunch launch capsule, riders freefall’s 35 feet into an intense Flatline Loop.  Next, instead of ending in a regular splashdown lane, riders are sent spiraling around a Champagne Bowl.  This was the first time all 3 elements were combined and this makes this unique slide the first ever Flatline Loop/Champagne Bowl Fusion slide.

You can see in the background of the Wake Zone the Flatline Loop and Champagne Bowl portions of the Florida Free Fall.  Aquatic Development Group

ADG also partnered with WhiteWater in 2017 on another project they are designing and building, a new water park in the Outer Banks region of North Carolina.  H2OBX Waterpark is a new concept where a lot of high capacity attractions were designed in order to minimize waiting in line.  ADG provided two wave pools, an Adventure Lagoon play area, an Adventure River and then incorporated WhiteWater’s water slides into the design around all those featured attractions.

One wave pool may appear normal, but it features twin breaking points so guests don’t all huddle at one spot in the wave pool.  It is also capable of everything from gentle waves to giant 6 feet waves in one of 8 patterns.  It is called the Cat-5 Bay Wave Pool here and all the names fit a mythology written to tie all the attractions together.  The other wave pool is the patented Twin TidesTM double entry wave pool.  Invented by ADG, this high capacity wave pool has two entry points and guests can swim from one end to another while  traversing waves over two feet in height.

H2OBX provided us with this picture of the Cat-5 Wave Pool under construction.

Between the two Wave Pools, a Flowrider® was installed and surrounded by usable deck space for food and beverage service and retail outlets.

Teach’s  Tides Adventure River is a custom designed river ride by ADG with geysers, waterfalls and various other features, including an island that was specifically created to house the Adventure LagoonTM ride.  Part of ADG’s new line of Water Rides, it is the first of its kind built in North America.  Designed as a throwback to the original Wet’ n Wild waterpark, the Deep Six Adventure Lagoon is an interesting water play area where kids can swim, play on inflatable modules, climb a rock wall, and slide down innovative structures.

ADG also created two family areas using WhiteWater’s slides and play structures, one with children slides called Sand Pail Beach and the other a large WaterFortress called Calico Jack’s Cove.  Calico Jack’s Cove has seven slides, including a Champagne Bowl attraction in order to give everyone a thrilling attraction.

Two large slide towers were designed and include many signature WhiteWater slide experiences.  One tower feature a Family Raft Slide and a Family Boomerango .  The other tower features a Boomerango, a 30 feet wide Sawtooth SuperBowl, two 71 feet tall Colorado Drop Tube slides and a Constrictor. A Flatline Loop and Drenaline Drop both equipped with AquaLaunch capsules provide extreme thrills. If you notice, most of the slides feature double or family sized rafts, so it fits with the high capacity goal of ADG. 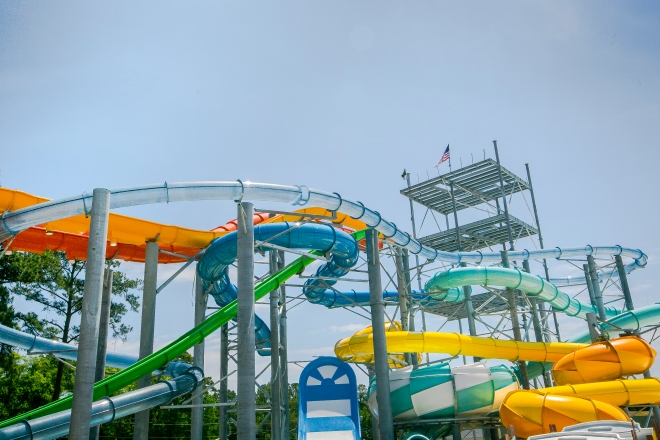 In this picture, you can see the clear Flatline Loop, the green DrenalineDrop and the Sawtooth SuperBowl among all the slides.  This picture appears courtesy of H2OBX 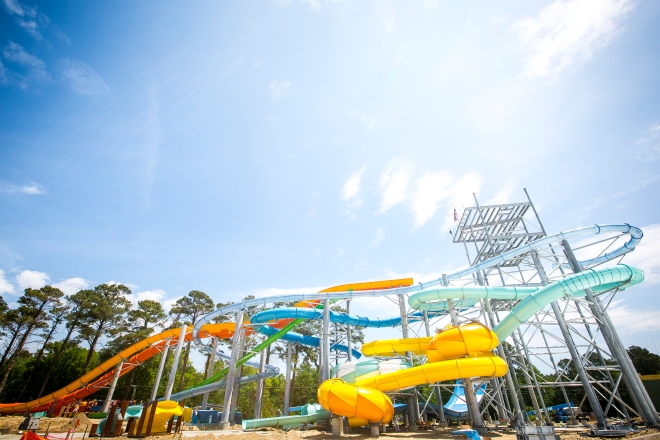 The bright yellow slide is a Constrictor where the flume widens in order to provide a more exciting experience when the tube climbs up the walls.  This picture appears courtesy of H2OBX