Polin from Turkey had a very successful show, hosting a triumphant press conference where Sohret Pakis, Polin’s Director of Marketing and Communications presented a few things. 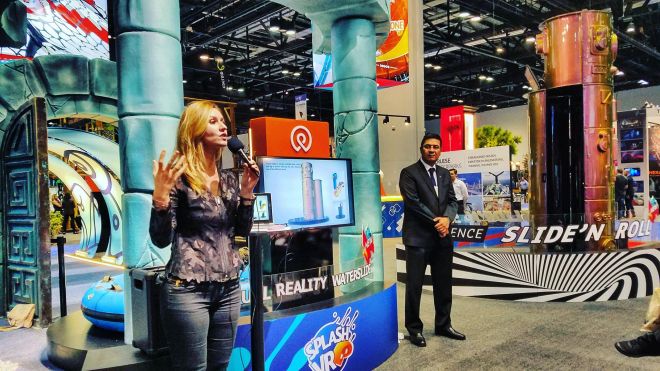 Sohret Pakis during her presentation.

Among the topics that were presented, Splash VR was discussed.  Riders on waterslides wear VR headsets, and this has two potential effects:  either make a new attraction stand out or rejuvenate an older water slide attraction.  Polin implemented this technology on a family raft slide at their flagship project, Land of Legends in Antalya, Turkey.  Using a proprietary form of GPS called SPS (Slide Positioning System) and waterproof VR equipment’s, riders experience a trip down a temple with swinging ax traps and other simulated effects.

Next, Slide n Roll was presented, where using existing features that Polin had pioneered, such as in tunnel music, light effects and patterns inside the flumes, a gaming component was added.  Both this and Splash VR along with the Splash Cabin presented at IAAPA IAE 2016 are now a part of the Polin Game Technology branch of the company.  Another innovation introduced at the show was a new flume type attraction.

Last, on the waterslide side of Polin, the Mantis was presented.  It is an evolution of the Space Race slide shown in the past by Polin where two four-passenger rafts leave the top platform at the same time and then race in the same large bowl.  On the Mantis, the rafts go up and down curved walls and again, thanks to the two rafts, achieve good capacity.  The Mantis curved wall element can also be integrated with another slide as part of a Combo Slide. 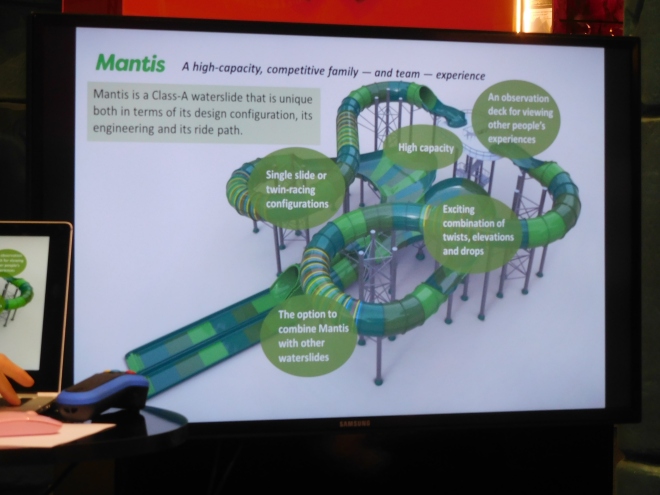 The characteristics of the Mantis slide. 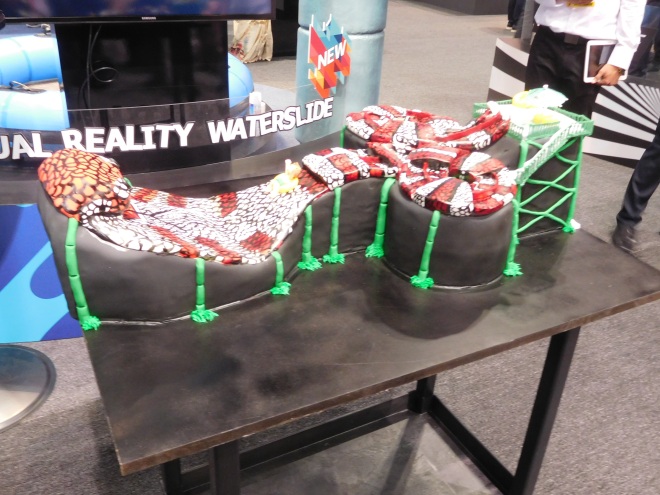 To celebrate the many Brass Ring awards received during this show, Polin ordered a large cake patterned after their award-winning King Cobra slide.  Company represensatives, visitors to the booth and the media all got to enjoy this delicious surprise. 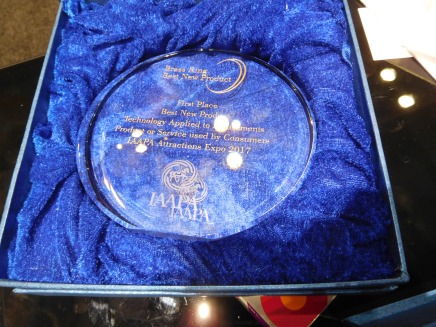 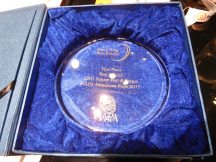 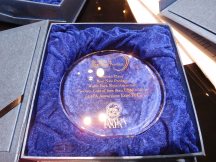 Three of the Brass Ring Awards that Polin won at the show.

Alterface Projects held a press conference formally announcing a new concept and introduced a new dark ride to the USA market.  First, WANDER is a new technology where using lightweight devices, guests walk around and interact with different things.  This is similar to other products currently offered on the market, but the main innovation here is its use in walkthrough attractions.  The devices presented at IAE were shaped like random tree sticks, and there was an interactive attraction on demo.  Based on the popular Smurfs IP, which is an incredible tie-in since both Peyo (creator of the Smurfs) and Alterface are from Belgium. 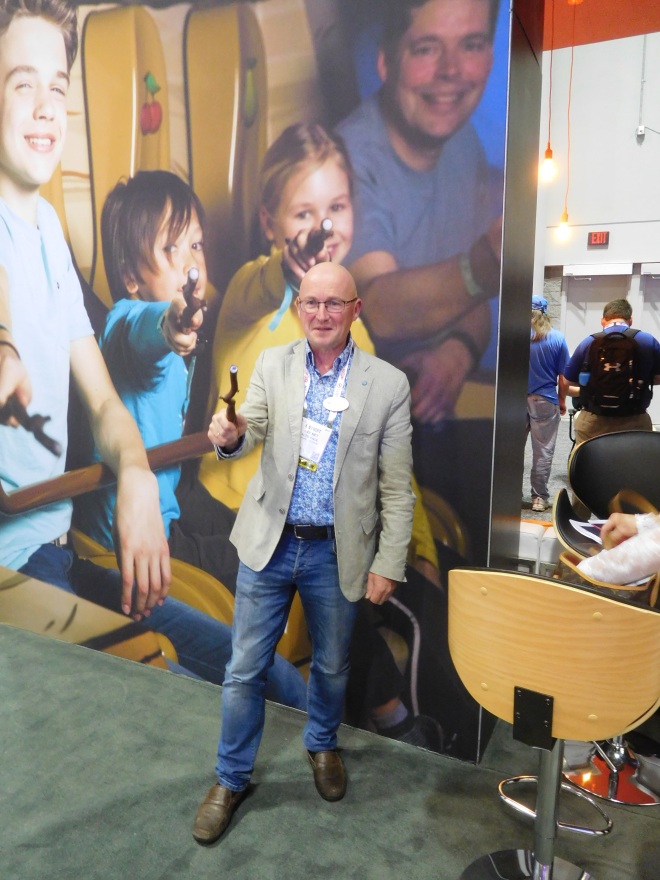 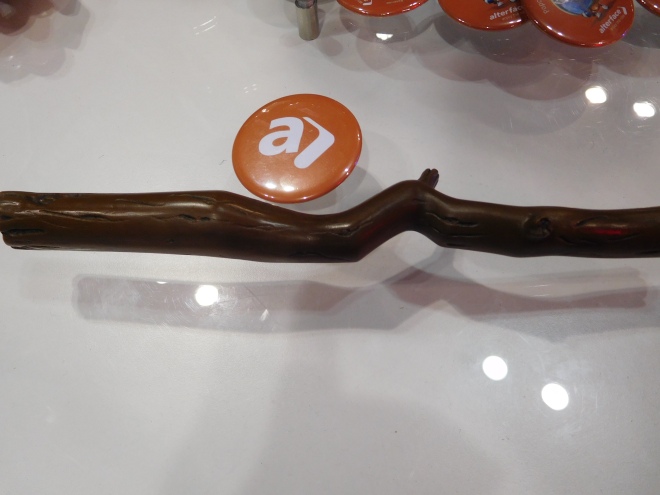 In this breakthrough demonstration, the random capabilities of the system were demonstrated as the idea here what that Gargamel, looking to find a way to make a potion enlisted us to assist him in rounding up the ingredients.  You would start off in the central room, and each guest would tap his stick at the screen.  You received a mission, such as go to the cave and collect bats.  After that, you returned to the central wooden stump, and a different assignment awaited you.  Each short game was played on an interactive screen using your wand.  Once each player had gone through each room and paired off with different players in each, the silly plot twist at the end revealed and the experience over. 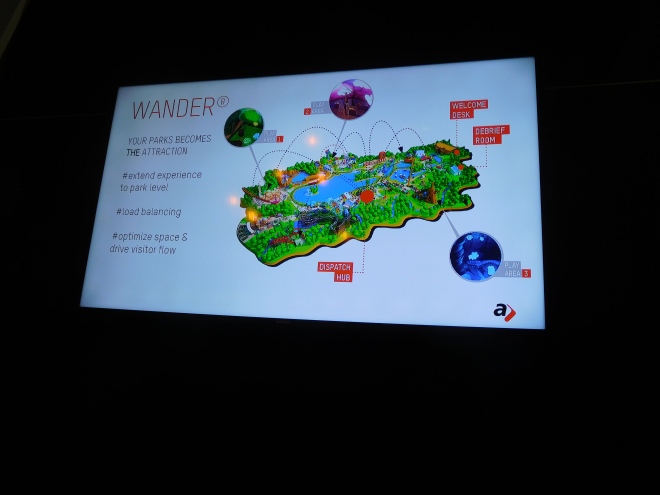 WANDER slide from the presentation.

It was a very different take on the interactive concept, and the possibilities are endless.  The low-cost interactive wands can be sold at a sensible price point to as many guests as possible if the whole park is equipped with Wander.  In the case of a self-contained attraction, this is again an advantage as the replacement cost of the wands is quite low.  Like with all Alterface creations, customization is infinite.

At last year’s IAAPA Asian Attraction Expo in Singapore, Alterface presented to some clients a new dark ride concept called Erratic.  Last year, ETF from the Netherland acquired a participation in Alterface and ETF main strength is its trackless ride vehicle.  Now, we have seen some randomization in past dark rides such as the Seven Acres Wood scene on Pooh’s Hunny Hunt at Tokyo Disneyland (this was not an ETF ride installation but instead used Walt Disney Imagineering proprietary technology), but what if the random aspect was pushed to the limit? 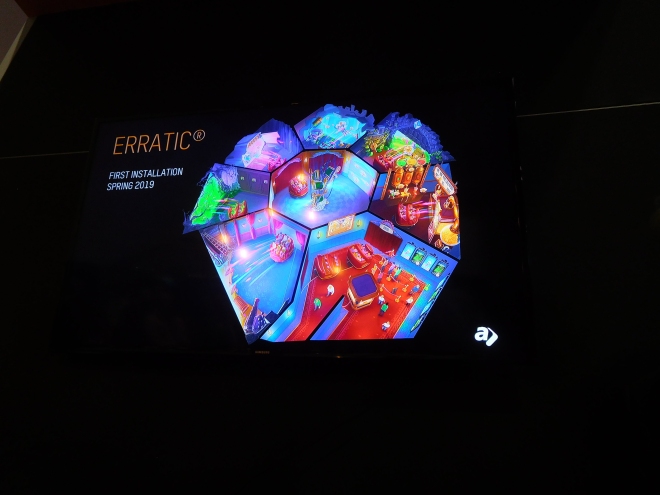 Alterface CEO Ben Cornet is a major cinema buff, so he thought of a brilliant new idea: what if the popcorn were tired of being eaten by the guests?  Seeing as they are born in the movie theater, all they know are movies; so the popcorn mutated and now imitates the film they have seen for so long.  The entrance and exit area are shaped like an old-style movie theater and guests board one of the many ETF trackless dark ride vehicles.  They are sent to a central room where many doors to the theater rooms are located, and they go through them randomly.  In the superheroes theater, the popcorns dress up as Batman and Spiderman, and guests use the interactive device mounted to the car to shoot the popcorns.  In the Horror presentation, Popcorn Zombies attack!  After each room, the vehicle goes back to the theater lobby, and the show adjusts based on their score.  Ben Cornet enjoys movies a lot, and he mentioned that he would include many visual puns and references in the scenes.  Popcorn Revenge is a fascinating creation and seeing as it is owned wholly owned by Alterface Projects, there are no complicated IP deals to renew. 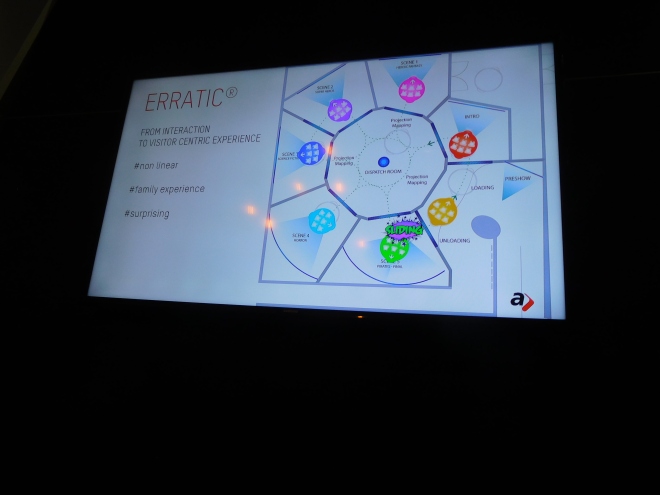 Example of what will happen during Popcorn Revenge.

It is an incredible concept, and we are happy to announce that Walibi Belgium purchased the first ERRATIC, opening in 2019 and will feature the Alterface proprietary Popcorn Revenge IP.

Tap and Go payment systems combined with entrance tickets and front of the line access is the end goal of many facilities now and many companies are working toward that goal.  Dator Inc. from Quebec held a press conference presenting their SiS Park Solution.  SiS integrates eight different platforms and gives the operator all the relevant information in real time, allowing them to react and adjust to different situations.  Were there a lot of food purchases at a specific time?  Was a particular product in high demand?  Was an individual attraction unexpectedly popular?  All that data and information allows quick changes and the statistics helps with budget and forecasts.

It is the future of the industry and Dator Inc. offers all those things to any facilities, from the local zoo to the most prominent theme park.  It is scalable, and parks are opting for a solution like this right now will be ahead of the curve and at the forefront of the industry. 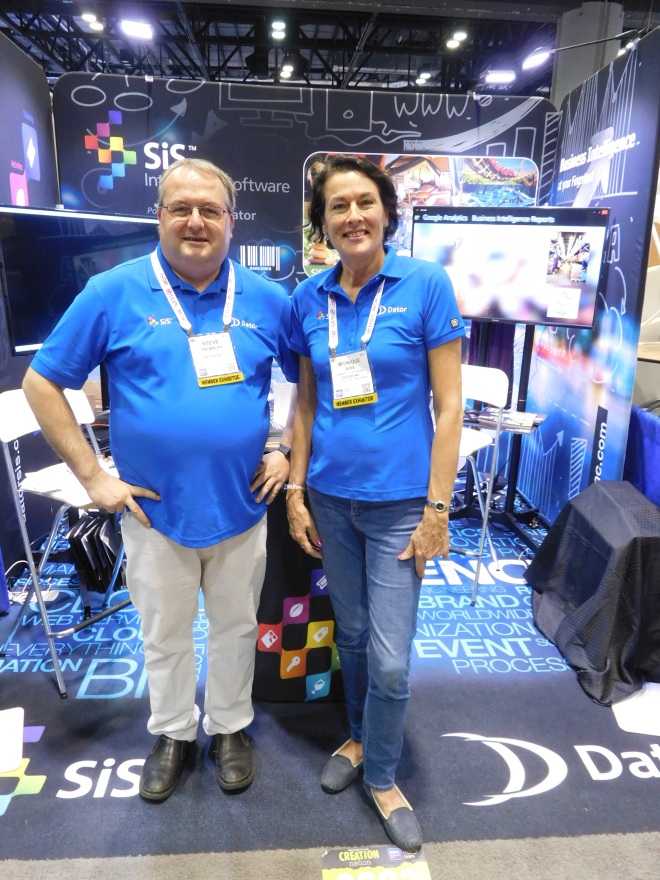 Part of the Dator Inc. team present at the show.

Congratulations to #tokyodisneysea for winning the 2022 #applauseawards from @lisebergab !
Listening to @abigail_posner keynote address at #iaapa .
Late night visit to Busch Gardens to wrestle with a crocodile!
Time to break the ice at SeaWorld Orlando ! Premier Rides
Goodbye Splash Mountain, you had a great run!
I got I ran from A flock of Seagulls as the song!
Loading Comments...