The Triotech announcement at the show was changed shortly before the show as they were to present a project in Branson, MO initially.  Their partner for a new 7D attraction was Face Amusement, but a cryptic company appeared in the press conference listing alongside Triotech: Ubisoft.  Ubisoft is one of the world’s largest video game studios, and among their properties, you find Assassin’s Creed, Rabbids, Rainbow 6 and many others.

So during the press conference, Ernest Yale, CEO, and founder of Triotech touched on a few subjects before getting to the Ubisoft part.  Triotech changed the logo of the company to a sunburst along with a new tagline: “Creators of Fun.”  They then showed off two of their recent dark ride experiences: Ninjago The Ride at Legoland parks worldwide and Ghostbusters 5D at Heide Park in Germany.  Based on Triotech great adaption of those IP’s alongside Larva in South Korea and The Walking Dead in Las Vegas, Ubisoft partnered with Triotech to take those IP’s out of the video game realm and into amusement parks and facilities worldwide. Ubisoft already operates an FEC facility in the Montreal, QC area and the Rabbids are featured at the Futuroscope in Poitiers, France;  this is the next step to exploit their incredible properties fully.

Triotech press conferences are always among the highest attended at the show and this year was no exception.

The first attraction to come out of this partnership is a new VR maze that Triotech had unveiled previously and the selected IP is Raving Rabbids.  This was on display at the show, and the big announcement was the next Assassin’s Creed.  Based on the latest game in the series, guests will explore an ancient Egyptian pyramid and given the vast player’s base that the series has around the world, this is incredible news, and we should expect to hear more about the first installation later in 2018.  As Ernest Yale noted during the press conference, he was quite skeptical of VR and when he saw what Asterion from France was doing with VR, he acquired the rights and will further develop the technology.

Triotech provided us with this image of the new Virtual Rabbids The New Maze.  http://trio-tech.com/

Speaking of Triotech, they had a famous guest trying the XD Dark Ride Theater at their booth during the show.  On the same day as their press conference, wrestling legend Hulk Hogan held a press conference at IAAPA.  Coming out to his theme song and attracting a huge crowd of journalists, Hulk Hogan explained that he was looking for ways to expand on his Hogan’s Beach Shop brand that is already present in Clearwater and Orlando, FL.  His legendary charisma and ability to convey emotion shone through, and he then walked around the show floor, trying different things.  His focus is on augmented reality, and VR and one of the companies he visited are Triotech.

On display were some graphical showing how strong the Hulkamania brand is.

The huge crowd at the press conference. 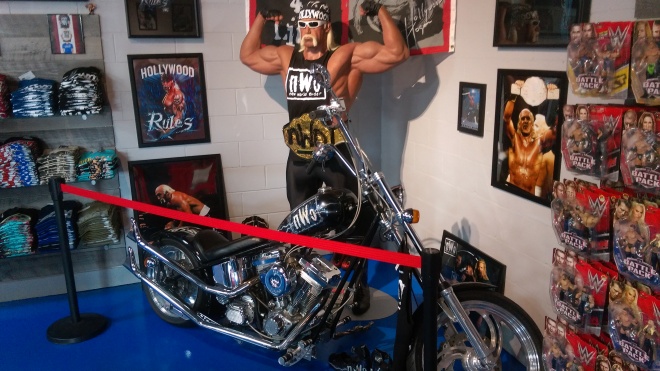 Hulk Hogan placed a few of his memobabilias inside, such as this custom chopper motorcycle.

Extreme Engineering has long been an innovator in the world of climbing walls and zip lines.  A few years back, they decided to take the zip line and bring it to the next level, creating the Cloud Coaster.

Using trolleys that support zip line style seats combined with a chain lift hill, this innovative roller coaster has low load requirements, so can be installed hanging from the ceiling of a building.  This opens up the areas where a roller coaster could not have been installed previously.  The first installation opened in June 2016 at Rockin Jump in Dublin, California and the second at the Zava Zone Trampoline Park in Sterling, VA.  Those were existing facilities and their Cloud Coaster expanded their guest base and great success for those facilities.  Two trolleys can be attached to double capacity, and so a parent could keep an eye on their child in front of them.

Last year, the new owners of the Galeries de la Capitale in Quebec City, QC announced that they would close down the Mega Parc indoor amusement park of their mall for a complete overhaul.  The old Ferris wheel and Moser Family Freefall tower were sold to another company, and most of the older rides removed along with the NHL regulation-sized skating rink. The Capitale Express Mack mine train roller coaster and a few other attractions would be transformed to fit the new image and storyline: Steampunk.

Among the concept arts shown for the new Mega Parc, there was something unusual: the Ferris wheel was brand new and was hub-less, something is only seen previously at Tokyo Dome City in Tokyo.  Like the Big O in Tokyo, the new Ferris wheel would have a roller coaster going through it not once, but twice.  This is a world’s first, and we were all curious as to who could design a roller coaster that could safely go twice in the center of a 70 feet Ferris Wheel. 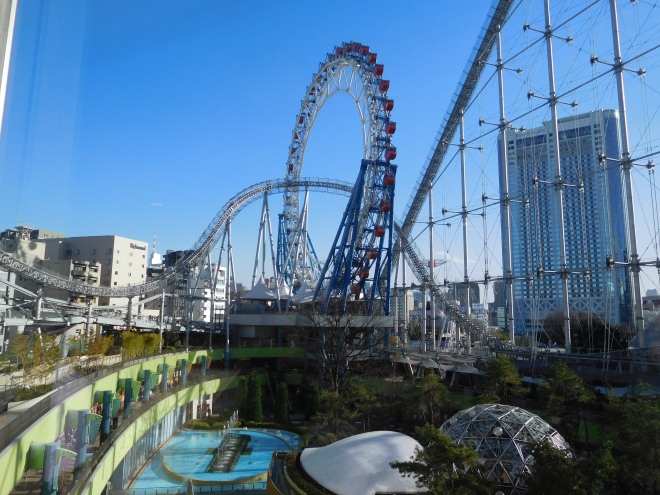 Park Vault visited Tokyo Dome City in the past and in January 2017, we shot this photo of the Big O Intamin Ferris Wheel.  The roller coaster that goes through it is the Intamin Mega Coaster, Thunder Dolphin. 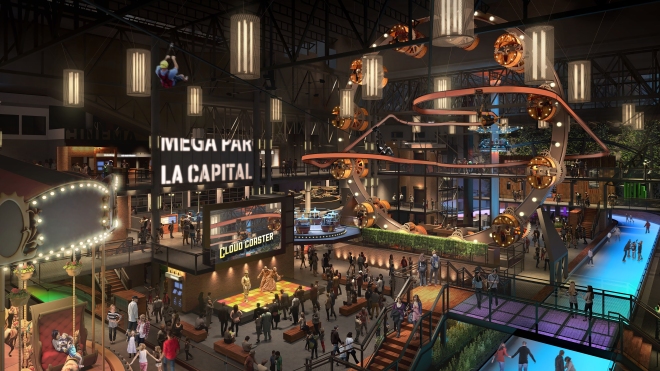 Courtesy of CNW Properties/Galeries de la Capitale, this is the concept art that raised our interest in the project.

The answer came at IAAPA IAE 2017: Extreme Engineering alongside the management of the Galeries de la Capitale announced that the world’s largest Cloud Coaster was coming to the mall and it would be the first roller coaster in North America to go through a Ferris wheel.  We can also add this innovates even further with the second passage through the wheel.  The Ferris wheel itself will be sourced from noted ride manufacturer Larson International from Plainview, TX.  Standing 72 feet tall and derived from the popular Giant Loop looping flat ride model of the same size, this will be the first installation of that model in the world.

The whole team working on this project posing in front of the concept art.

Guests will board their trolley 60 feet in the air and then be taken up a lift hill to the highest point of the track.  They will go through 405 feet of track and a second lift hill during their journey high above the Mega Parc.  It is a signature headliner attraction and one that previously would not have been possible without the unique features of the Cloud Coaster.  The Mega Parc installation will take the ride to the next level.

Martin & Vleminckx is a renowned ride installation company and one of its founder’s, Alain Vleminckx, had the privilege of building a ride under legendary ride designer William Cobb.  Le Monstre at La Ronde is what got the journey started for the company, and they are now the premier wooden roller coaster supplier in China, building ten rides with an eleventh under construction.

MVR as the company is now more commonly known has brought new personnel to the company and a renewed focus on the North America market, bringing along former IAAPA president and chairwoman Gina Romano as their new Vice-President for Sales and Marketing for North America.  She brings along an incredible wealth of experience and connections and will help the company grow a lot.

Now, MVR called a press conference at IAE 17, and the announcement was major: they announced that they would be the exclusive distributor for Canada and United States for the Fabbri group and Preston & Barbieri.  David Welsh, Project Manager for MVR further elaborated on the agreements stating that all new rides from those two manufacturers would be installed, commissioned and supported by the Haines City, FL warehouse by MVR.

Fabbri Booster at EDA Theme Park in Taiwan.  This is an example of the large flat rides that Fabbri design.

The Splash Battle, the first attraction of its kind, was created by Preston & Barbieri.

The three executives who signed the agreement.

Shaking their hands in agreement after the contract signing.