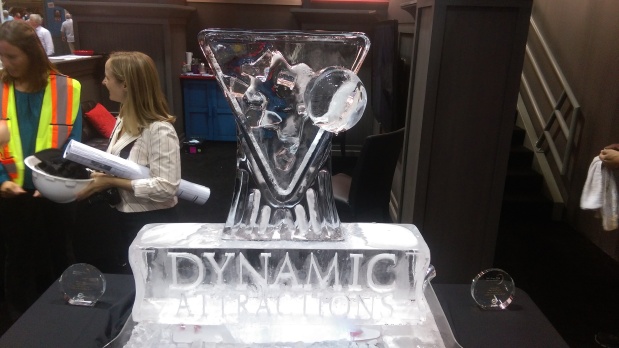 SBF-Visa and Rides-4-U featured a joint stand and had a few attractions on the show floor.  One of them was a brand new extended Spinning Coaster that added an extra curve on top of the standard figure 8 layout.  Interest at the show was high and this park model was already sold to Beech Bend in Bowling Green, KY.  Another version of the classic Whip debuted right next to the spinning coaster.  Known as a Drift Race, it made its worldwide debut at IAAPA Attractions Expo 2015 and appears to be another solid family attraction. 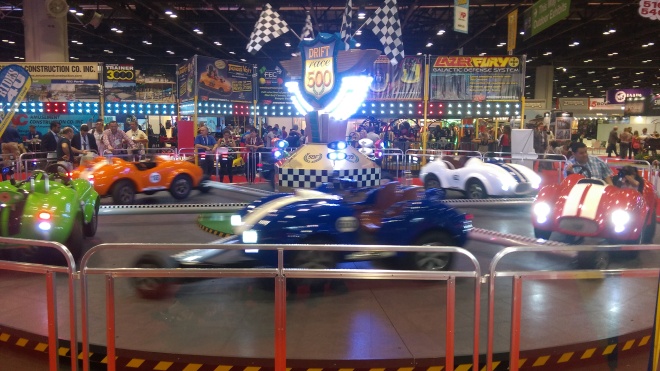 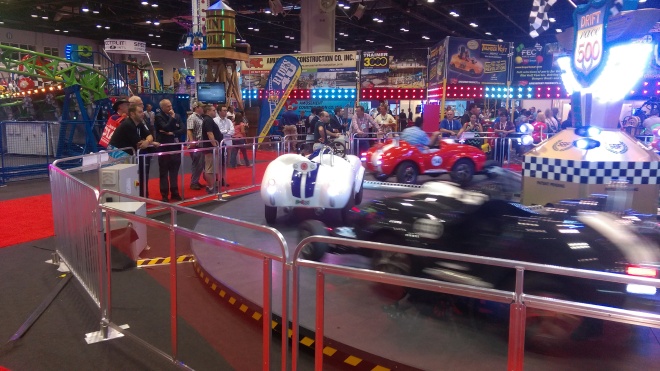 The Drift Race in motion and notice the pole in front of the car that provides the whipping motion. 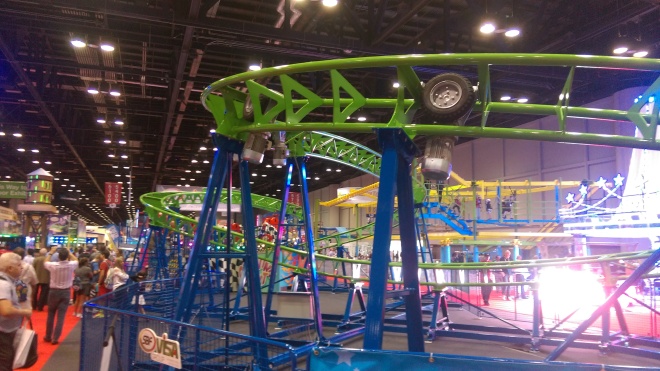 Most of the Spinning Coaster layout. 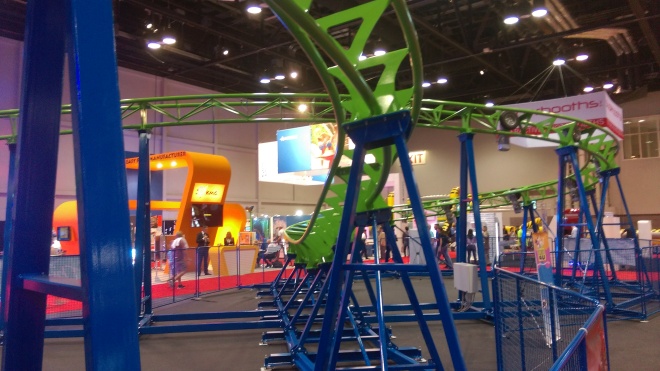 This is where the new model differs from the one previously shown at IAE. After the drop, it originally turned to the left into the station. 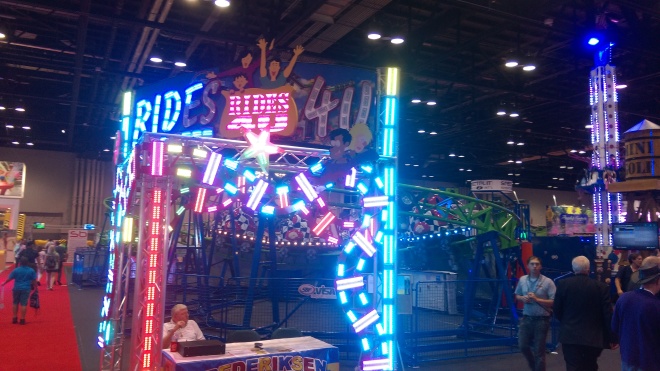 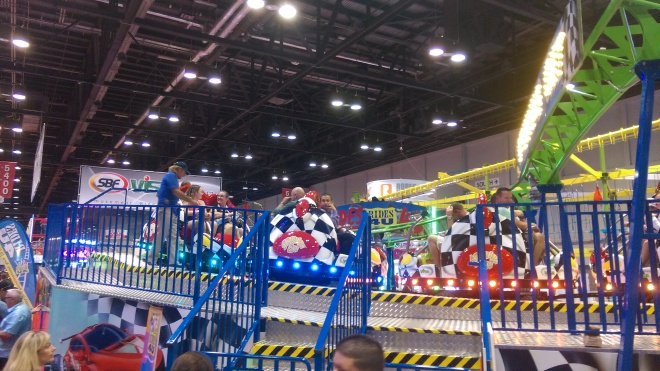 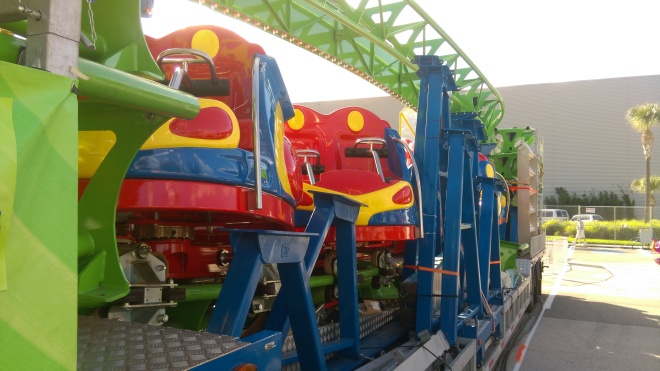 The outdoor show floorhad this racked and ready to move portable spinning coaster. This one had the standard Figure 8 layout and standard car colors.

Quassy Amusement Park (Middlebury, CT) held another press conference this year at the Rides-4-U booth and introduced their fourth attraction in a row from SBF-Visa, Reverse Time.  This is the North American debut of that ride and it can best be described as a 21st century version of the classic Trabant, which it is replacing at Quassy.  After over 50 years of good and loyal service, it was time to retire the Trabant and luckily, the park finances allowed them to look for a replacement. SBF Visa had a perfect replacement:  Reverse Time.  The park decided to keep the standard model name since it was easy to market and appropriate for the motions of the ride.  It also fit almost perfectly the old Trabant spot, which is something important in a compact park.  The height restriction is 48 inches and it will feature forward and backward movements. 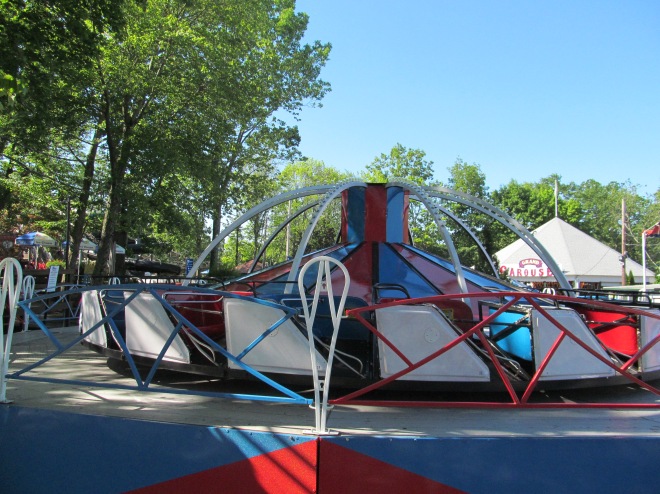 This picture shows the Trabant in 2013. 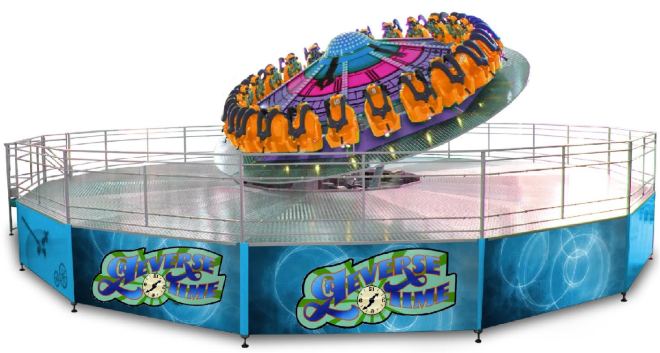 Concept art of Reverse Time. Notice how the R integrate the Carousel horse that is an important signature of the Quassy logo. The park will also install LED lighting over and under the ride.  This picture appears courtesy of Quassy Amusement Park. www.quassy.com 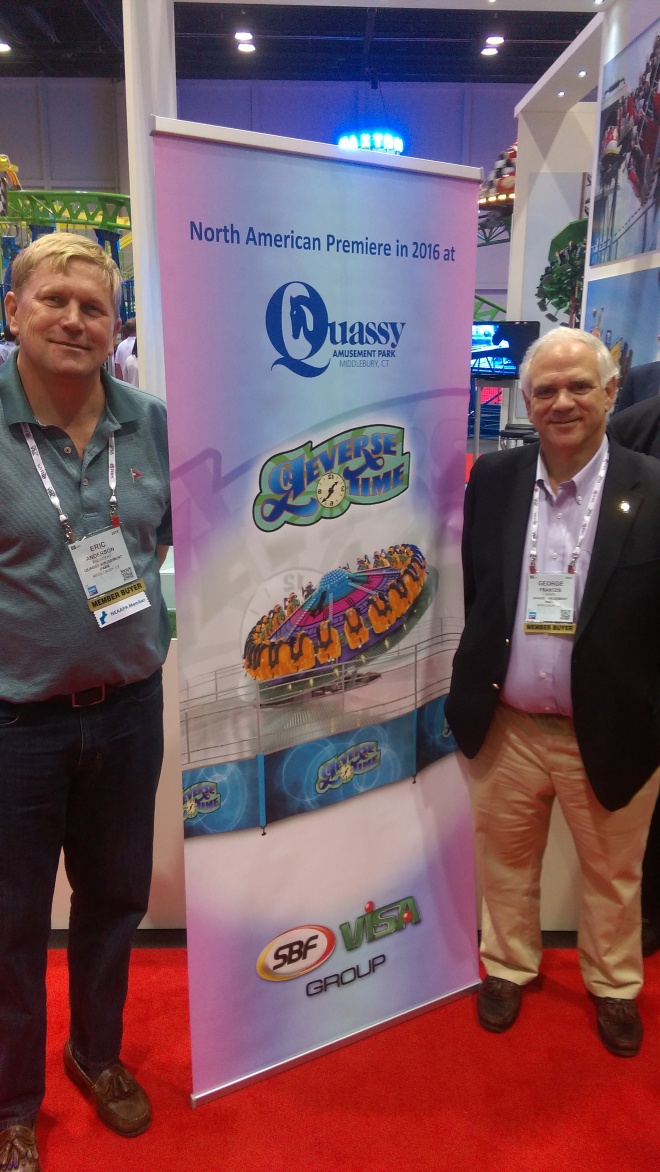 Eric Anderson, President of Quassy and George Franzen, one of the owner of the park, along with the banner advertising the ride. 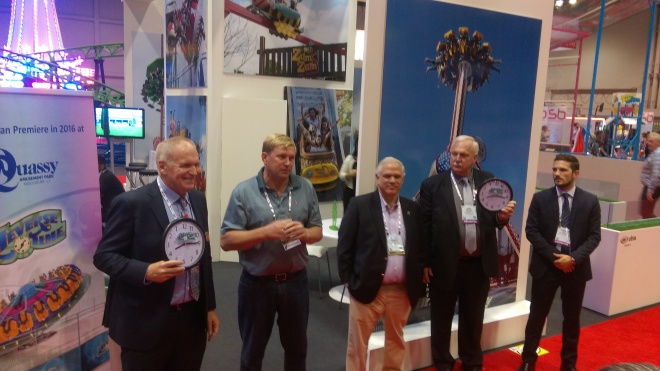 Quassy is also introducing the first part of a two years expansion from Proslide Technology.  It will effectively double the number of slides in Slide Away Bay.  It will start with 5 new slides from the popular KIDZ line as Slide City with one of those the second Proslide KIDZ Bowl 14 in North America.  The Kalahari KIDZ Bowl is part of a larger complex while the Quassy will be the first freestanding installation in North America.  Then, in 2017, a new tower with 3 slides will appear: two Pipeline tube slides with redesigned curves and a TantrumTwist slide with two Tornado 24 funnels.  The TantrumTwist will be the highest capacity slide in the park since it will use 4 passenger’s patented Cloverleaf rafts  (720 guests per hour) and is the first Funnel slide in the state of Connecticut. 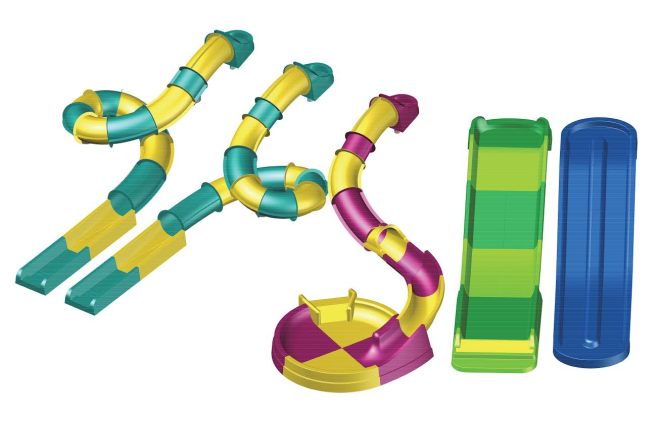 Slide City with the KIDZ Bowl in the middle.  This picture appears courtesy of Quassy Amusement Park. www.quassy.com 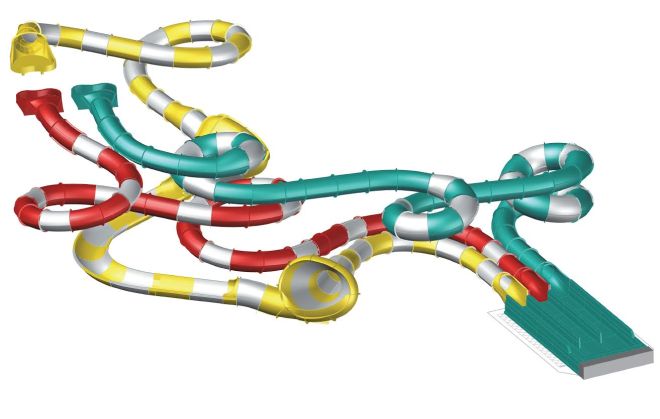 The proposed 2017 expansion with the Pipeline slides in green and red and the Tantrum Alley in yellow.  This picture appears courtesy of Quassy Amusement Park. www.quassy.com 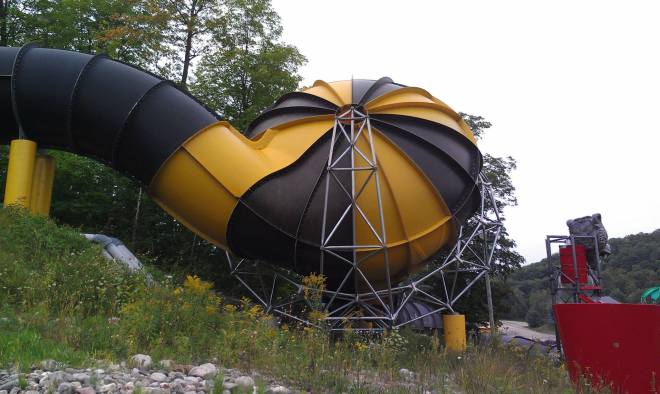 This was the first Tornado 24 funnel and the Quassy slide will feature two of those. This picture was taken at Mont Cascades (Cantley, QC).

An example of the Cloverleaf raft that will be used on the Tantrum Alley.

Proslide won the coveted Brass Ring IAAPA award for the RocketBLAST/FlyingSAUCER Hybrid slide that premiered at Siam Park (Tenerife, Canary Islands) last summer.  This incredible attraction reinvents the water coaster with the most efficient uphill system in the market today and also uses the most comfortable rafts.  This was combined with the new FlyingSaucer feature, which imitates the feeling of being a Olympic level slalom skier with a signature movement around the edge of the FlyingSaucer.  The edge of the FlyingSaucer is steeper than a regular curve and this contributes to a great up and down movement along the walls.  Singha (the name of the slide at Siam Park) impact has been incredible and we should see more of those very soon. The raft hitting the wall in one of the ride 4 Flying Saucer feature. 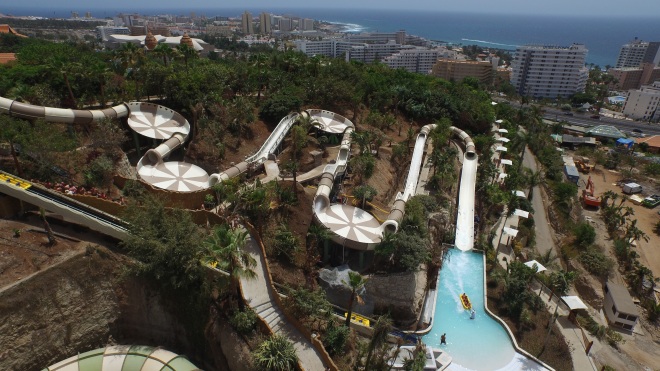 An elevated view of Singha. 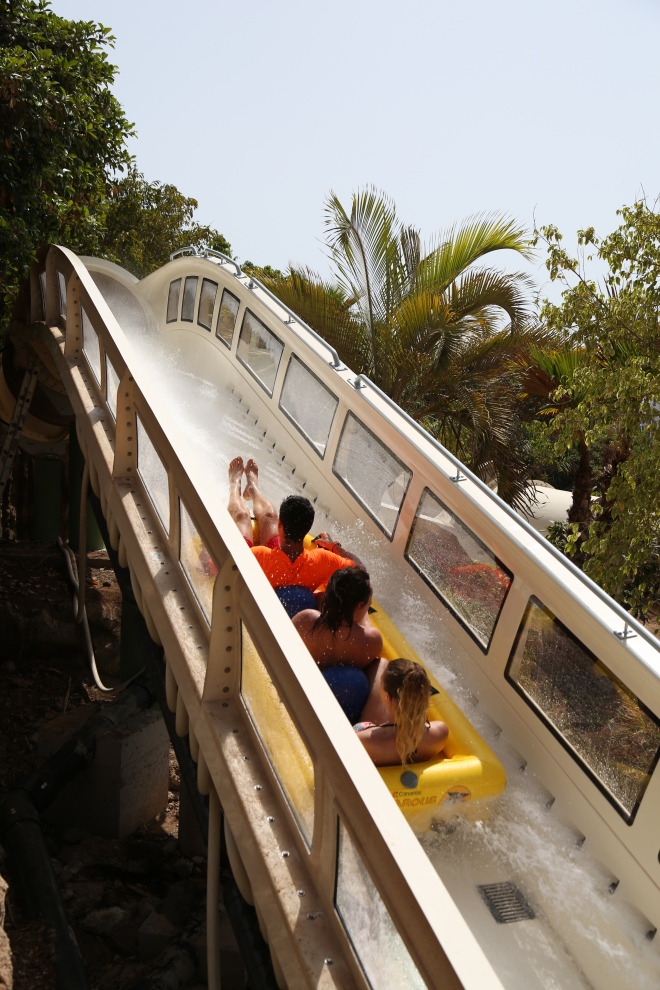 The biggest innovation with the water jet system is that they are much smaller and concentrated. They hit special pockets on the side of the raft and propel at a steeper angle than any other launch system on a water slide. 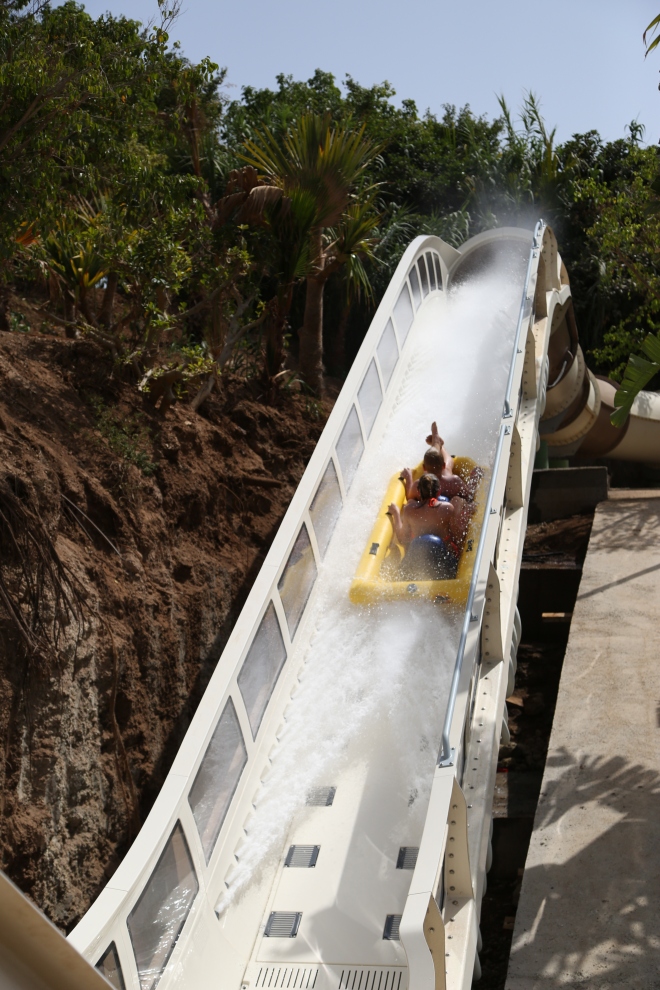 Dynamic Attractions introduced a new impressive stand and image for the company.  At a press conference on Wednesday November 18th 2015, Guy Nelson, CEO of Empire Industries (parent company of Dynamic Attractions) made two important announcements:  first, a new office for marketing and sales was opened in Orlando, FL and this will better serve the industry as many suppliers and companies have offices in Orlando.  Second, Dynamic is launching “Dynamic Unlimited”, which will offer turnkey projects for companies.  As Guy Nelson pointed out, many parks do not have a large design arm and this is where Dynamic Unlimited comes in.  Dynamic will source the multimedia, Audio/Video, etc. and deliver a complete package to customers. 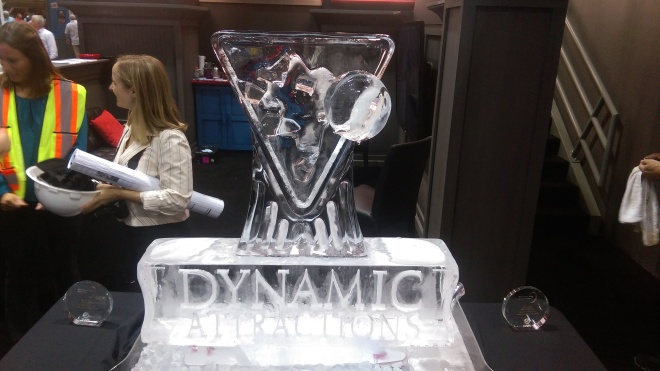 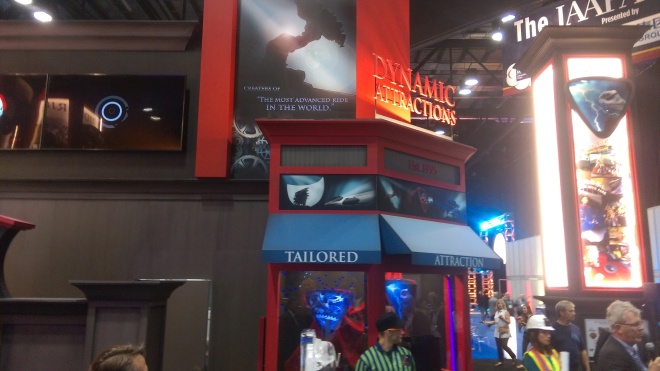 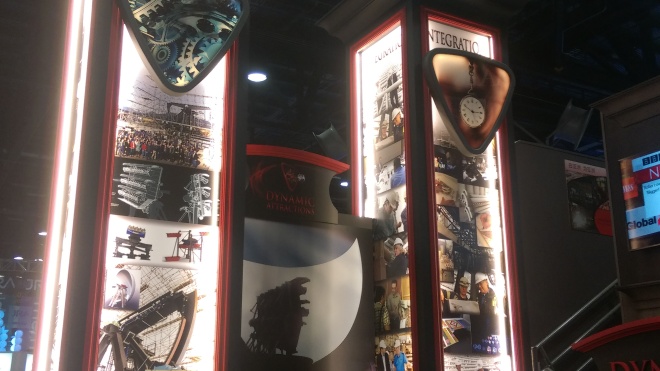 The pictures show various projects the company has worked on. 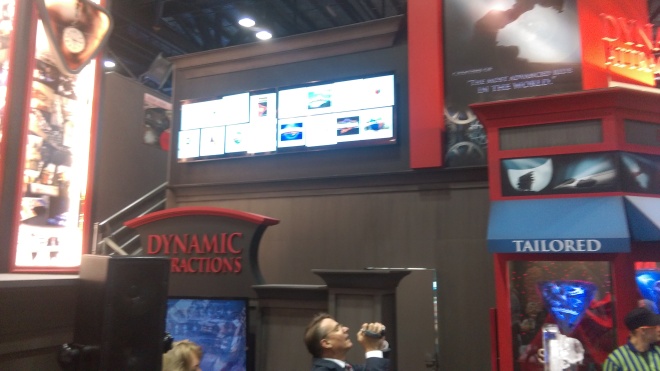 It is also one of the few booth on the show floor with two levels for more meeting space. 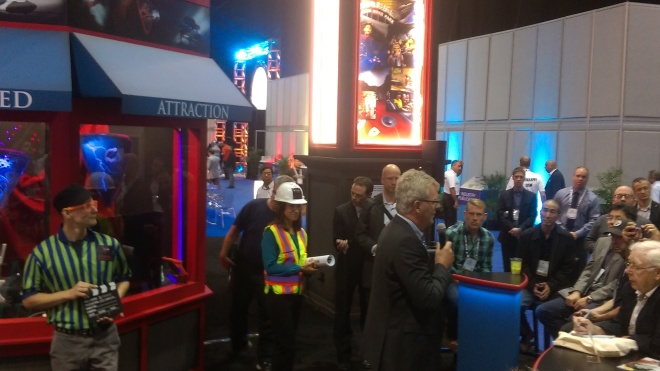 CEO Guy Nelson addressing the media during the press conference.

Luna-Park Rides is from Poland and has been active in the industry for 15 years.  This year, their stand was in the outdoor section and they brought various ride vehicles such as a set of cars for their portable Dragon Coaster and Flying Elephants.  The Dragon Coaster is a mainly portable attraction and it can fit on a single trailer, thus making it an economical and attractive option for carnival operators.  The ride features 28 seats and it can accommodate a lot of families at once and bring more revenues.  The Flying Elephants are hydraulically operated and like all Luna-Park Rides, designed to be very efficient power wise.  This is especially important on the midway as electricity is often generated by expensive generators.  Having more efficient rides can sometimes be the difference between switching out a generator for a larger one and keeping the existing one. 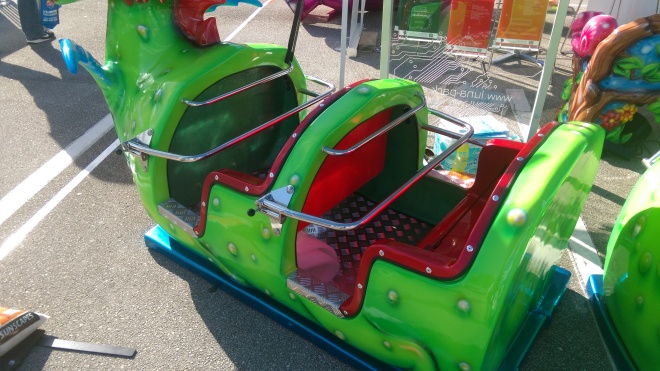 The Dragon Coaster front car.  The lap bars are manually operated with a lever. 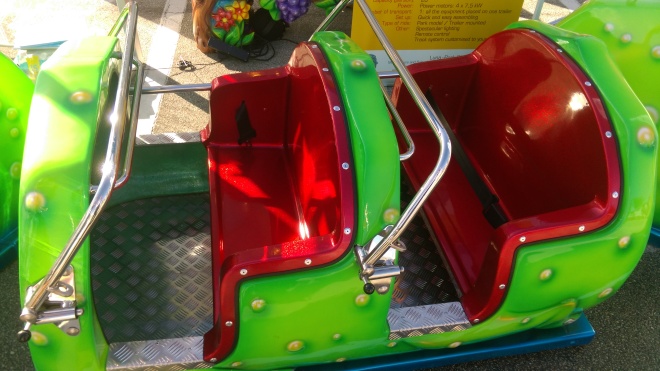 Retractable seat belts are also used to restrain riders and the galvanized steel floor is non-slippery. 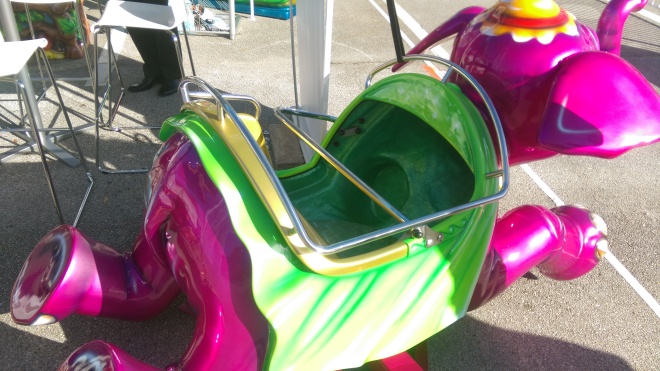 Gerstlauer Amusement Rides had a few models on the stand and one of them was the new Sky Roller that will be debuting in 2016 at Canada’s Wonderland (Vaughan, ON).  It is a new version of that attraction and it will stand 115 feet tall and have 24 seats versus the existing 59 feet tall and 16 seats models.  Given the fact that Canada’s Wonderland is one of the busiest seasonal park in North America, it made sense to go with the 24 passengers model. 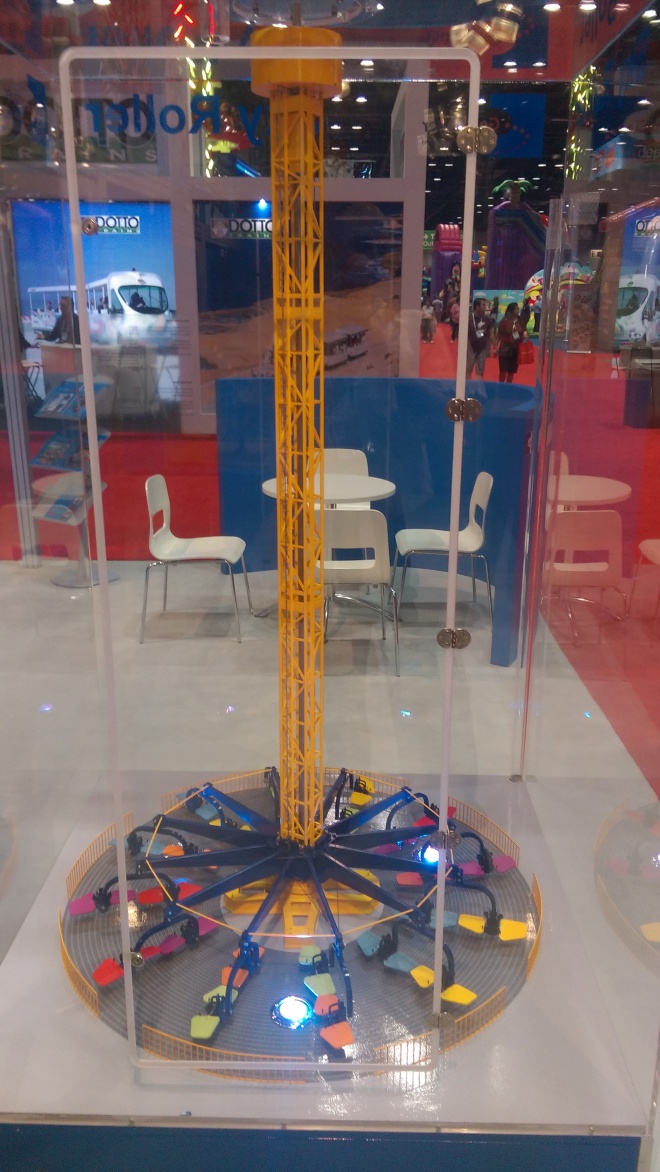 Model of the Sky Roller going to Canada’s Wonderland in 2016 as “Skyhawk”. 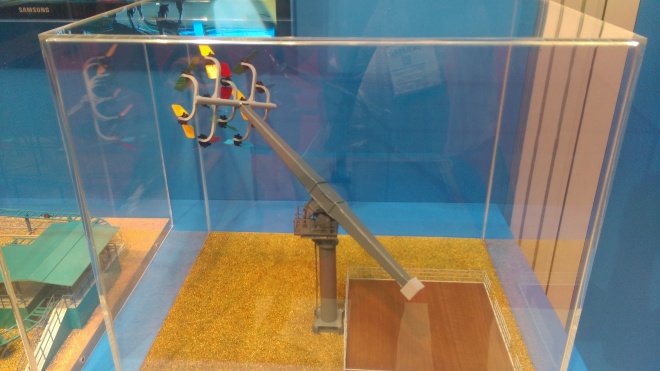 Model of the popular Sky Fly attraction.  Currently, one operates in North America at the Mall of America in Nickelodeon Universe under the name “Shell Shock”. 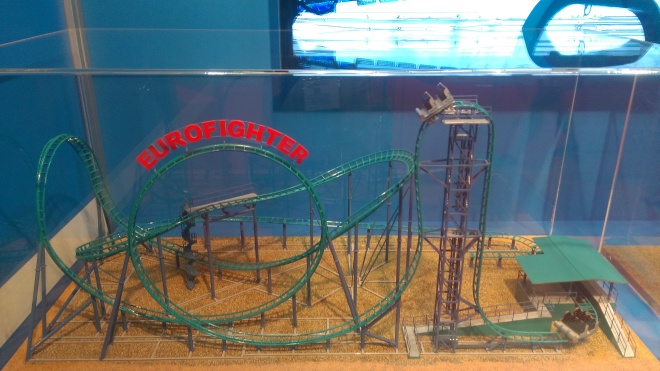