In 1999, Islands of Adventure opened next door to Universal Studios Florida.  Featuring areas themed after adventure and various IPs, two attractions, and a show used fire on opening day.  The first of those was The Amazing Adventures of Spider-Man in Marvel Super Hero Island.  The ride features a fantastic blend of lifelike 3-D animation, scenery, and special effects that brings the experience to the next level. 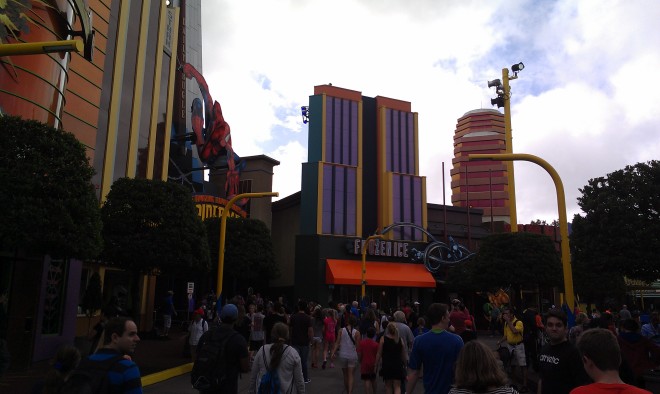 The entrance marquee of The Amazing Adventures of Spider-Man at Islands of Adventure.

The queue starts in the office of the Daily Bugle, deserted as the Sinister Six took over the city.  All the journalists fled, leaving J. Jonah Jamison, the iron-fisted editor of the Bugle, to enlist us, regular tourists, to cover the events for him.  Luckily for us, the Daily Bugle invented the SCOOP, a remote control all-terrain vehicle for such an occasion.  After a round of testing that left the test subject covered up in plaster, lap bars were installed in each row to restrain riders. 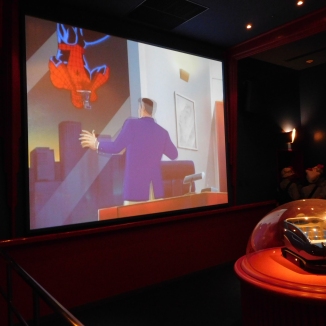 The waiting line video still use the classic 90’s appearance for the characters. 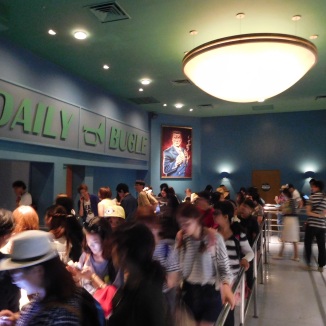 The waiting line snake through the Daily Bugle at both parks. 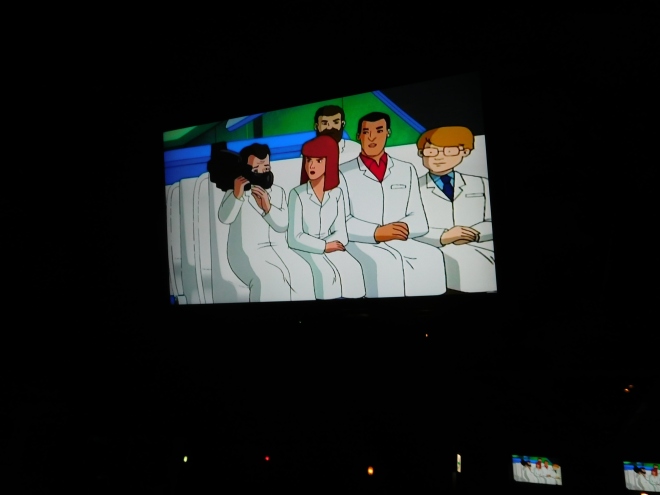 The humorous safety video in the station.

After picking up night-vision goggles, the apt name used here for the 3-D glasses, riders board the 12-passenger scoop, arranged in three rows of four.  One interesting design feature of those vehicles is the high sidewall.  They serve a practical use, as they prevent guests from leaving the car and, force riders to look straight ahead, making the 3-D screens more effective.  Oceaneering designed and manufactured the vehicles for Universal Creative.

You can see one of the SCOOP from the attraction in Universal Studios Japan.  This is one of the side of the car that lifts up for boarding. 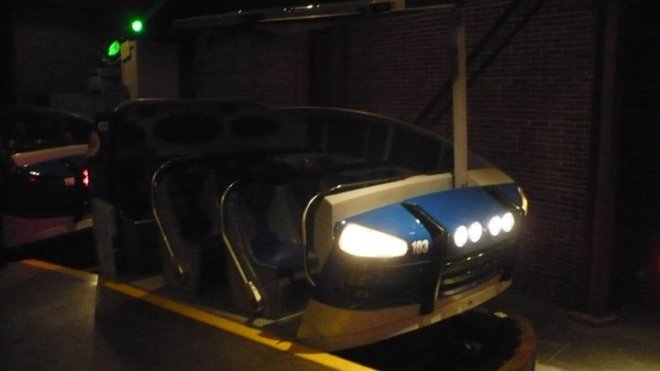 A SCOOP at Islands of Adventure with the side door open, showing the lap bars and seats. 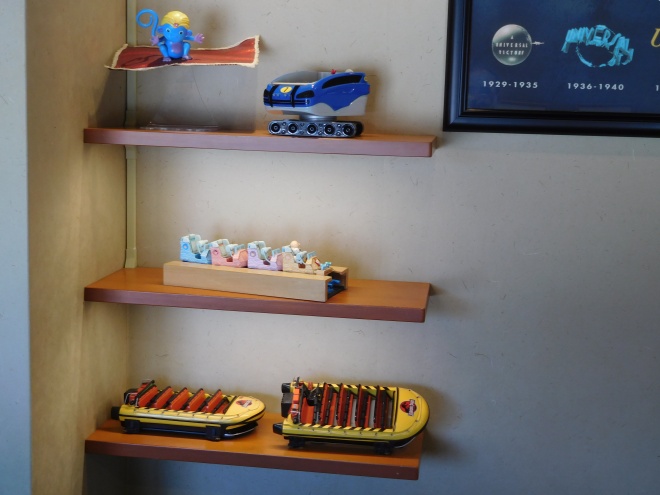 At Universal Studios Japan, they have models of every ride vehicle at the park available for guests with disabilities.  Guests take the model in their hands and familiarize themselves with access, restraints and what the ride vehicle will be like.  The SCOOP is on the top shelf.

The ride starts with a drive through a dark alley, where J. Jonah Jamison explains what’s happening and points out the spider signal that just flashed in front of us.  We arrive at a courtyard, where we see our first 3-D screen.  This moment is where things get to the next level: timed perfectly with the animation, a physical ladder swings out as Spider-Man jumps on it.  Our SCOOP shakes as he lands on the hood, and the way it blends in seamlessly give riders their first wow moment.  The ladder is a clever piece of show action equipment that doesn’t distract from the projection, but makes it feel real and takes the passengers into another level of immersion.

Spider-Man speaks to riders for a few moments before leaping away toward the nearby OsCorp warehouse.  His action causes the SCOOP to slide in an out of control way, causing it to almost crash into a garbage truck.  The truck features animation for the cab, but the tipping bucket above is another clever physical effect.  Since 2012, the cab has featured a cameo of famed Marvel Comics legend Stan Lee if you look closely. Riders then break through the doors of the warehouse and see parts of the stolen Statue of Liberty.  It seems like this is the hideout of the Sinister Six, the gang of supervillains that took the Statue of Liberty earlier that night.

Shadows of rats can be seen on crates while the tablet of the Statue hangs above.  Turning the corner, you can see the Sinister Six demonstrating the Anti Gravity Cannon that Doctor Octopus possesses, lifting the Torch of the Statue of Liberty.  They don’t notice the SCOOP at first, but Jamison asking what’s happening tips them off to our presence, and the chase is on.  First, Electo, a villain capable of controlling electricity, stops the vehicle in front of a power control panel.  When he uses a giant plug to electrocute the SCOOP, the panels and dials all go crazy next to the screen.  Turning to the right, SCREAM, a Symbiote (an alien lifeform who takes over humans and provides them with superpowers while taking their aggression to dangerous levels) jumps toward riders from a stolen tank, but Doctor Octopus grabs her with one of his cyber tentacles.  He yells that riders are his, and he shoots the Anti Gravity Cannon above.  This causes the head of the Statue of Liberty to rise in the air.  He shoots again, this time hitting a crate that rises in a cloud of smoke.

Things calm down a little in the sewers, and Spider-Man asks the new recruits to return to the Bugle as things are too dangerous right now.  Hydro-Man lifts the SCOOP from the water behind him, causing Spider-Man to punch him ineffectively.  He lurches at riders, causing water drops to fall from the ceiling.  He punches out, breaking a steam pipe and sending riders careening backward.

The SCOOP now stops in front of a brick wall that is broken down piece by piece by Doctor Octopus, who then threatens riders with a flame that comes out of his tentacles.  The fire is made all too real for the riders, thanks to a heat projector directed at the car.  Luckily, Doctor Octopus loses his grip and falls backward.  An interesting illusion is then created, lifted straight out of old ghost trains and dark rides: how do you simulate going uphill with a perfectly flat track?  The walls and ceilings of the exit tunnel are angled to give riders the impression they are driving up out of the sewers.  This pure, yet smart illusion present in the attraction makes it so much better than the simple sum of all its parts.

The following scene is what many consider their favorite.  Hobgoblin makes his appearance next to the Brooklyn Bridge.  He rhymes this not so innocent song: Trick or Treat, down my feet (are you sure this is right? … I always thought it was smell my feet!), time to blow you off the street!  Spider-Man intercepts his first exploding pumpkin and sends it toward the bridge. The second one is not caught in time and explodes on our right.  This giant blast of fire is done in a decorated alley while riders are under the bridge; much space is given around it, and given the size and frequency of the blasts, the full building height is used for clearance.

Our singed and battered SCOOP arrives in the theater district, where Doctor Octopus finally hits riders with a beam from the Anti-Gravity Cannon.   The buildings surrounding the screen drop-down as the SCOOP starts rising in the air.  One mechanical effect is having skyscrapers on endless chains, adding a real accent to what we see on the screens.  The action continues, with Spider-Man following Team SCOOP and disposing of the Sinister Six, one by one in the air.  He hits the Hobgoblin, causing him to fall from his sled while also knocking out Scream.  He tricks Electro into shooting electricity at Hydro-Man, vaporizing him in a blast of steam and water on riders.  The resulting explosion cause Electro to get knocked out.  Doctor Octopus deactivates the float just before Spider-Man kicks him out, causing riders to plummet 400 feet toward the ground on screen.  The sharp movements of the SCOOP, along with the quality of the animation, make the freefall very believable and, of course, Spider-Man saves the day.

The ride concludes with the Sinister Six all wrapped up, and, as a clever final joke, we see J.J. floating in his office, webbed up courtesy of Spider-Man.

Many consider this attraction as one of the greatest in the world, two decades after its debut.  While it wasn’t the first to use 3-D screens with motion bases (Race for Atlantis, located in Las Vegas was the first such attraction), the incredible combination of the 3-D screen, fire, liquid nitrogen blasts, heat and show action equipment raise it to the next level.  The Amazing Adventures of Spider-Man opened in 2004 at Universal Studios Japan (Osaka, Japan) with one change in addition to the language localization: a second loading platform was designed to increase ride capacity in the busiest non-Disney park in the world.

The ride at Universal Studios Japan is located where Kongfrontation/Revenge of the Mummy is located in Florida.

A look at the entrance plaza in Japan.

In 2012, Universal called upon Christie to provide new projectors for the 3-D screens to bring new images, and updated character look to life.