Fried Dough is one of the most popular food items at amusement parks around the globe. Something that has its origins at fairs in Europe that make it a staple and something most guests would not even consider eating outside of that context.

This staple has its origins in the Middle East in the Persia and Arabia regions, where locals started boiling fat and oils to cook yeast dough. Then, it spread to Germany, where it is known as “drechter kuche,” and it was from Europe that it was in turn brought, around 1879, to America by German immigrants. They settled in the Pennsylvania Dutch area, which today is the south-central and eastern areas of the state of Pennsylvania. The new arrivals started serving it with powdered white sugar and renamed it to an easy to pronounce name in English: Funnel Cakes.

Many areas in North America came up with their own variations around the same period: in the New England states, it is a flat piece of dough that is deep-fried and called simply “Fried Dough.” In the Midwest, the tasty treats are called Elephant Ears and follow the same shape and recipe as Fried Dough.

To this very day, this park staple is still prevalent in Europe, and many countries from the Netherlands to Romania have their unique variations, served for holidays and special occasions. We will detail how some of the variants and toppings.

Risen yeast dough is prepared in advance and separated into disk-shaped individual pieces. A popular alternate solution is to use a food supplier solution. They offer individual frozen portions that can be stored longer and don’t require an ample kitchen space to prepare. Once a guest orders Fried Dough, the dough disk is dropped into a wide fryer to give it space to expand and swell into the familiar shape that we all love. It is flipped once during the cooking process and then flipped into a paper plate. Various toppings are used, with the classic powdered confectioner sugar the most popular.

Navajo Natives have their variant, called Fry Bread or Bannock, created with ingredients they could get after their forced move across the United States.

In 1978, Grand and Pam Hooker started serving their family recipe of Fried Dough at the Killaloe Craft and Community Fair. Located in Ontario, 95 miles northwest of Ottawa, the unique Fried Dough attracted a lot of attention at the fair. They were named BeaverTails. Two stands serving the pastries opened at Ottawa’s Rideau Canal and Byward Market in 1979- 1980. The first installation outside of the Ottawa area came to La Ronde, the amusement park in Montreal. The park was in the middle of a significant transformation, and BeaverTails, known in French as Queues de Castors, became synonymous with the park and a tradition for park guests. There was a famed location at Walt Disney World’s Epcot theme park that is still missed by guests there.

One major difference between regular Fried Dough and BeaverTails is the dough composition. While regular Fried Dough is commonly made with all-purpose white flour, BeaverTails uses proprietary whole wheat-based Dough. The BeaverTails dough balls are hand-stretched right before frying. After cooking, they are topped with an incredible array of toppings. Popular options are a maple spread, hazelnut/chocolate spread, and the Killaloe Sunrise, which consists of a BeaverTail topped with sugar, cinnamon, and a slice of lemon to add a new taste dimension to it. 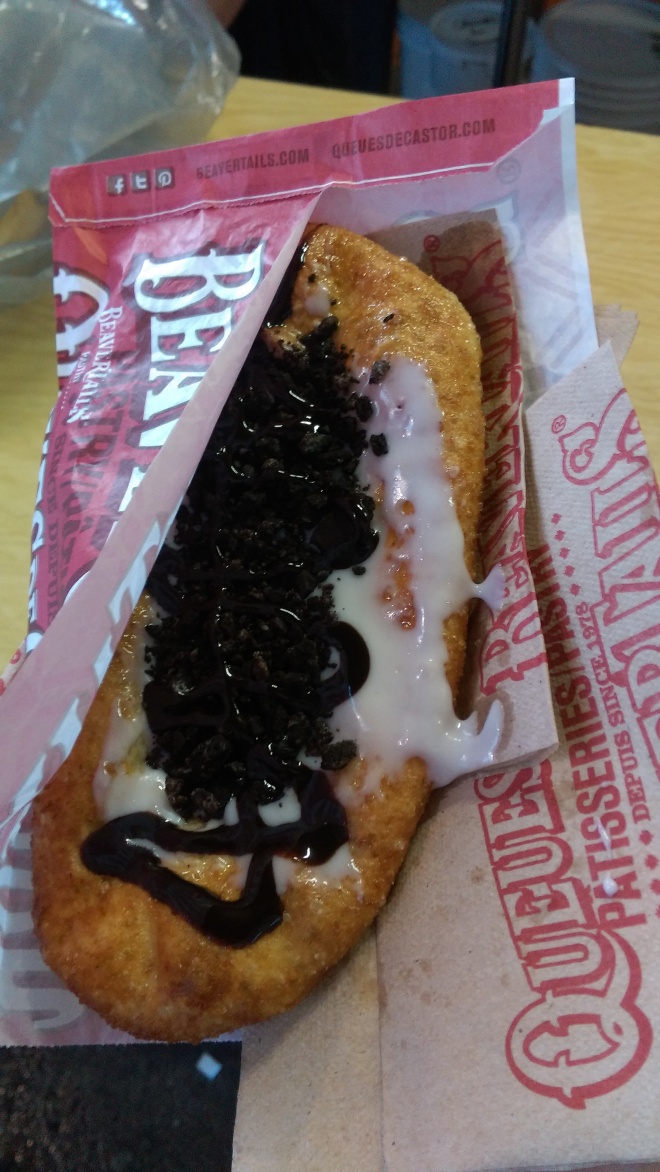 Premium topping combinations can be the Coco Vanil’, where vanilla cake icing is lathered on the pastry, followed by crushed oreo pieces and topped with chocolate sauce. The Triple Trip is truly quite a trip: chocolate/hazelnut spread, melted peanut butter drizzled on top, and Hershey’s Reese’s Pieces finish the imaginative combination. BeaverTails are now present around the world, with locations in the United States, UAE, Japan, and other places. 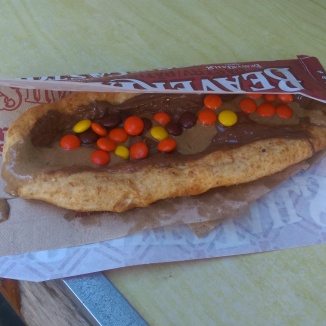 Whereas Fried Dough uses pieces of Dough that are deep-fried, Funnel Cakes uses a liquid batter. The name refers to the funnel that is used to pour the batter inside the fryer. After a minute or so of cooking, the cake is flipped to finish cooking. It is then removed from the hot oil and put on a paper plate. Finely powdered confectioner sugar is a popular topping, along with ice cream parlor style strawberry sauce. Parks took the idea of the BeaverTails premium toppings, coming up with their combination of toppings, like Silverwood in Coeur d’Alene, ID. Huckleberries and Huckleberry syrup is a unique regional topping served on Funnel Cakes at the park.

Menu of the different Funnel Cakes served at Silverwood.

Commercial mixes are commonly used, but it is quite easy to make the batter from scratch, as Knoebels Amusement Park does in Elysburg, PA. They even sell bags of the Batter Mix to guests, only requiring liquid to be added.

An everyday staple of fairs and amusement parks is to take chocolate bars and cookies, dip them in a very liquid batter, finished by deep-frying. When the chocolate bar is removed from the warm oil at the right moment, you get a crispy exterior, with a center that is just starting to melt. Fried Oreo cookies are a popular option for operators since they come in commercial packs that are sealed and easy to standardize. Hersheypark, with its relation with the Hershey Company, offers Deep Fried Reese’s Cups that are topped with powdered sugar before serving to the guest.

The Churro, as we know, was innovated in Spain and Portugal. It is thought to have originated with the Youtiao, a fried snack where dough is pulled by hand, forming deep-fried strips. When it came to Spain, to facilitate the fabrication, the dough is extruded through a star-shaped nozzle and cut at standard length, helping control costs and allowing them to be sold commercially. A traditional topping is cinnamon, with powdered sugar and fillings like crème popular as well.

The J&J Snack Foods Corporation offers the Tio Pepe’s line of Churros, which are sold at Disney Parks in North America. It is what people commonly think of when they want a Churro, and its quite easy for operators to prepare: bake the frozen Churro in an oven or quickly fried for 10-20 seconds. When J&J’s proprietary cinnamon-sugar mixture is required, the cooked Churro is rolled in the mix, and they are ready to sell. Six Flags prefer to serve the California Churros line from J&J since they have more options. Oreo, Apple sauce, Bavarian Cream, and Cajeta (Mexican caramel sauce) are flavors that are offered.

Tokyo Disney is famed for its amazing array of Churro. Here are a few examples: 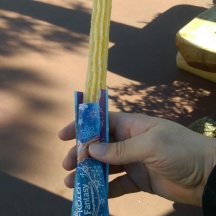 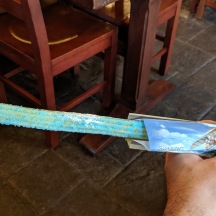