In 2004, Proslide further evolved the bowl slide with the BehemothBOWL, the largest in the world.  The Bowl segment is a massive 60 feet across and to help increase capacity, was designed to use the 4 person Cloverleaf raft.  A scaled up CorksScrew Exit smoothly bring the rafts out and then depending on the client needs, a very short or long exit section will be designed after.  Similar to the ProBOWL 30, the first park to introduce the BehemothBOWL was the Roseville, CA Golfland-Sunsplash, a long term Proslide customer.  This helped open the Bowl slide to even more parks as compact parks could now install a custom Bowl slide that got hundreds of riders through every hour. 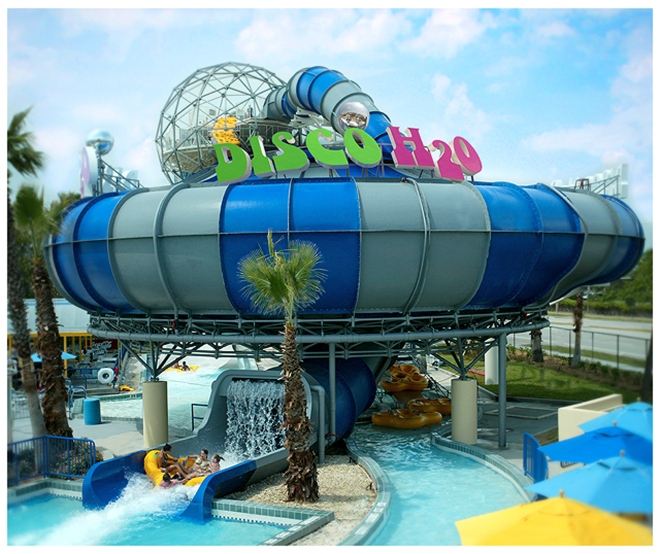 Wet ‘n Wild provided us with this great picture of the Disco H2O. It uses a raft conveyor and you can see the channel leading to it on the right.  http://www.wetnwildorlando.com/

You can see the drop into the Bowl in this picture provided by Flex.

This promotional picture of Disco H2O show the light show and disco ball inside the bowl portion.  It is quite unique and music is also pumped through the whole ride to give a unique atsmosphere and make the ride stand out from other slides in the competitive Orlando market. This picture appears courtesy of http://www.wetnwildorlando.com/

In this picture, you can see how Proslide integrated the start of Disco H2O on the existing tower of The Surge, a Proslide Mammoth. When Disco H2O opened, to simplify loading, the round family rafts in use on the Surge were replaced with CLOVERleaf rafts which is the new slide was going to use. 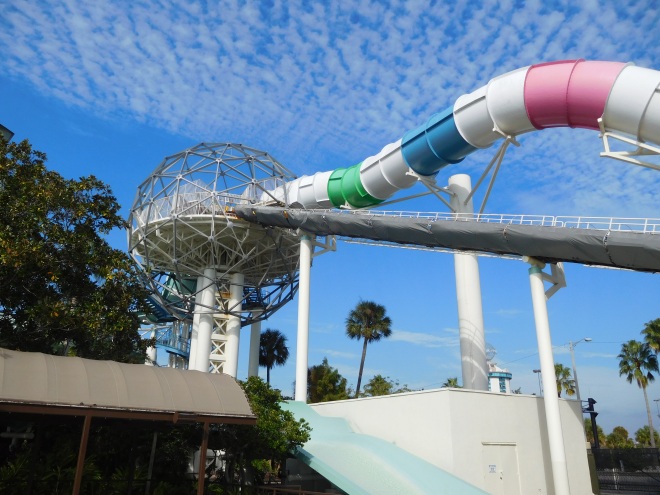 The start of the slide and the raft conveyor. 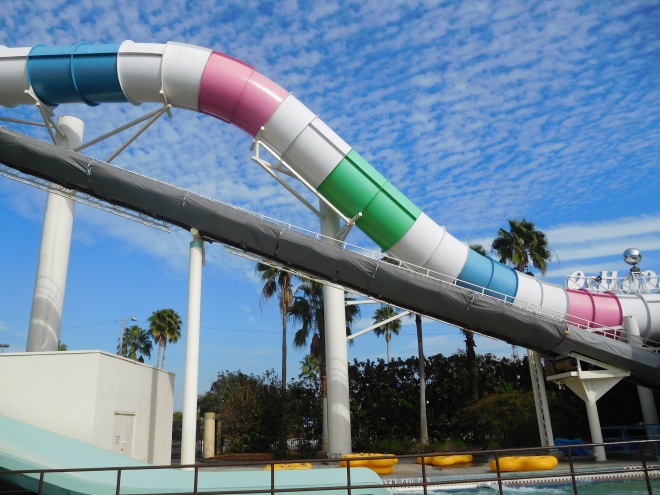 The steep drop into the BehemothBOWL 60.

From the steps going up to the slide, a look at the run to the BOWL.

A side look at the painted BehemothBOWL 60.

Notice the custom umbrella supports due to the raft return path. In order to connect the exit pool of Disco H2O to the existing conveyor lift, a long channel was constructed and in order to give it space, the bottom supports were designed to allow the necessary clearances. 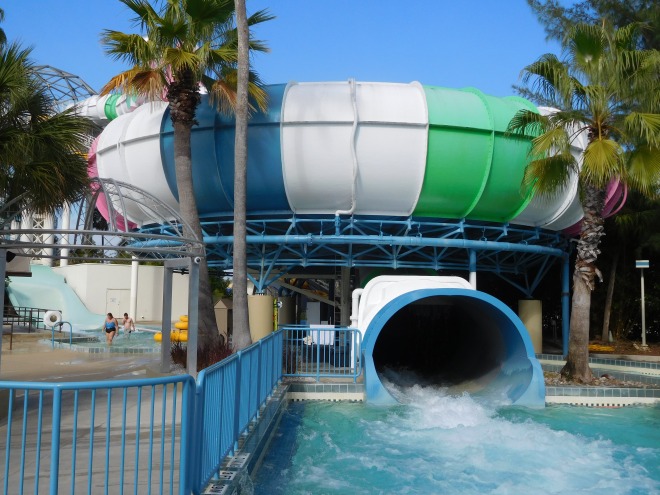 The exit flume of the BehemothBOWL 60.

The 2004 prototype (Stormrider at Golfland-Sunsplash) and the 2005 Disco H2O (Wet ‘n Wild in Orlando, FL) has a shorter run to the bowl due to the tight space requirements at those parks.  Super Aqua Club installed Typhon near their lake in 2007 and went with a zero entry exit pool at the end.  Typhon start with a few turns in the dark before an incredibly steep drop provides a brief moment of weightlessness and that gives the raft a huge boost of speed for the bowl.  This provided the blueprint for future installation as many parks saw the potential in doubling the thrills of their new slide. 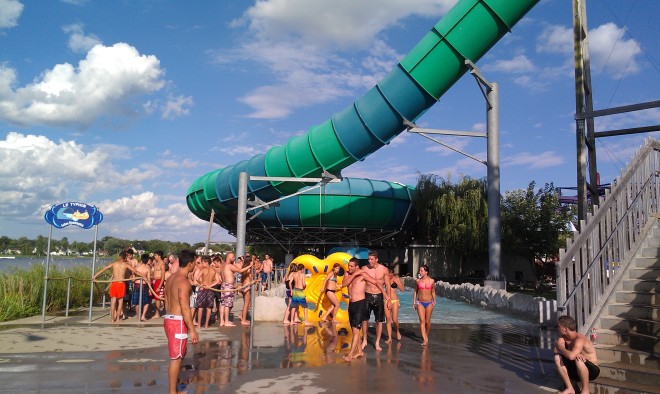 Typhon zero entry pool and waiting line to the left.  You can see the Bowl in the background and line management at Super Aqua Club is extremely efficient and the best in the world for multi raft slides.  The four passenger rafts have to be filled up completely and guests line up at the bottom.  The number of rafts has been calculated that guests only have a minimal 2-3 rafts wait at the top of the tower so it is a lot more efficient and comfortable for the guests.  Capacity is incredible and near what Proslide rate for the slide in an ideal world.

The sides of the pool were beautifully sculpted to appear to be made out of handlaid stones. 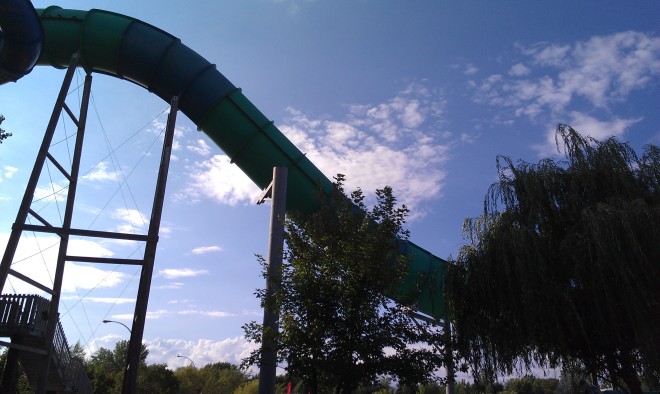 The extremely steep drop into the Bowl on Typhon. 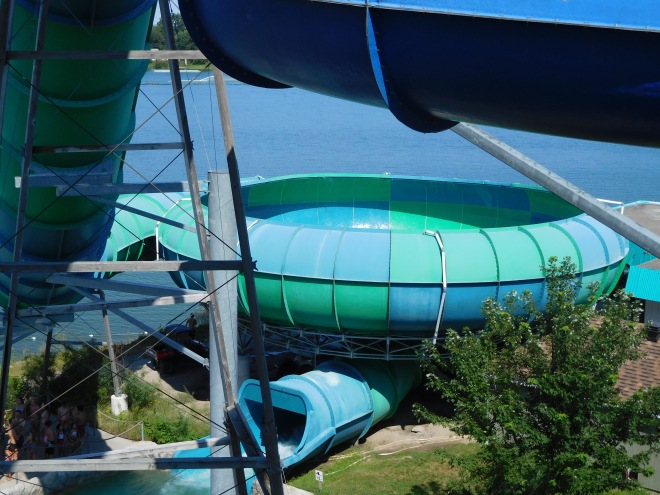 An overhead view of Typhon. 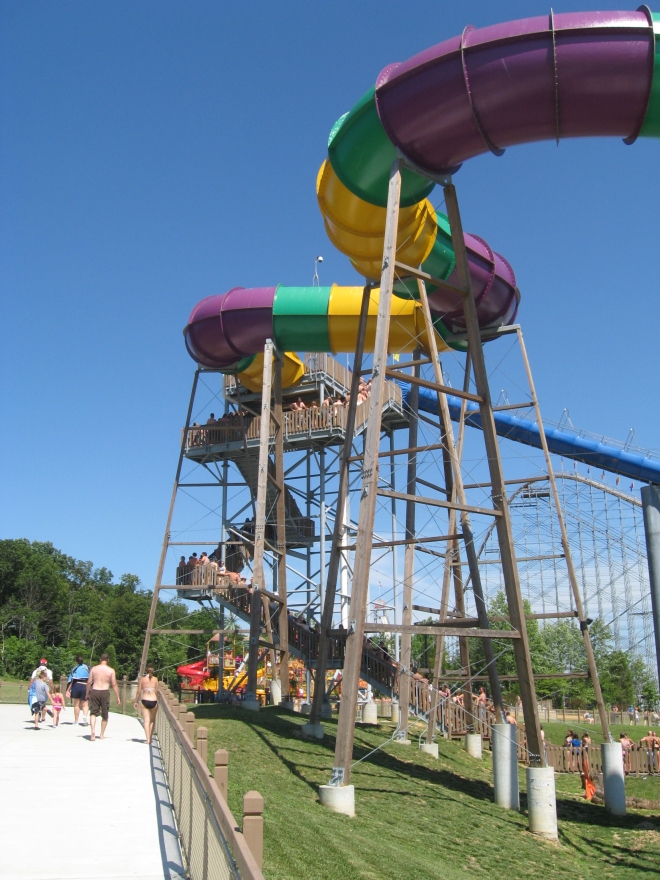 Like Typhon, it features a longer run to the Bowl, but the drop is not as steep as Typhon.

The first BehemothBOWL in Asia opened in 2008 at Chimelong Water Park (Guangzhou, China) in their first expansion and this was quickly followed by another at Gyeongju World (South Korea) brand new water park, California Beach.  Forrec Ltd. from Canada was hired by the park to redevelop the old water park and Forrec did an incredible job designing an efficient water park where all the park main slides are located on the same tower.  A BehemothBOWL 60 was selected by Forrec to go on the tower and Proslide successfully intertwined it with the rest of their attractions.

In this photo shot from the park Ferris Wheel, you can see the slide tower on the right and the Behemoth Bowl is yellow and green.

At the request of Six Flags in 2008, Proslide came up with the Bullet Bowl, a smaller Bowl attraction that require less space and less height to start the experience.  This attraction proved to be perfect for many smaller parks or parks that have space concerns since they don’t require a very long run to the bowl.  They can be easily combined with another Bullet Bowl or another attraction.  Since then, the attraction has been renamed the CannonBOWL 30, after the diameter of the bowl.

The first two installations were at the then Six Flags Kentucky Kingdom (Louisville, KY) and Great Escape (Queensbury, NY).   In both cases, they were extremely compact and gave them a much needed family friendly thrill attraction.  The name given to both attractions was “The Mega Wedgie”.

Over at Great Escape, the placement was interesting since it recycled a very old feature of the park.  Prior to 1994, the area occupied by the Comet roller coaster and Splashwater Kingdom water parks was the park campground.  Once the decision to build the Comet was settled on, the campground was closed and the existing registration lobby preserved as well as the campground original pool.  It was a classic tiled in-ground pool and when Splashwater Kingdom opened in 1995, it was reopened to provide extra capacity to the water park.  The park at that time only had five slides, a children’s playground and the Capt’n Hook’s Adventure River, a river attraction with a wave machine to make it unique at the time. So, even having that extra pool helped a lot.  When Mega Wedgie came in, the park looked at their assets and decided to recycle that pool for the exit of the CannonBOWL 30.  It saved the park some money and preserved an historical pool that dates back to the time of Charlie Wood.   The only modification was to fill the deep end with cement to bring it from 6 feet deep to 3 feet and a half.

We located in our souvenirs this unique postcard of the Great Escape Camping Resort.  No dates were listed, but we estimate it at around 1984-1985.

The Mega Wedgie with the old Registration office in the background. 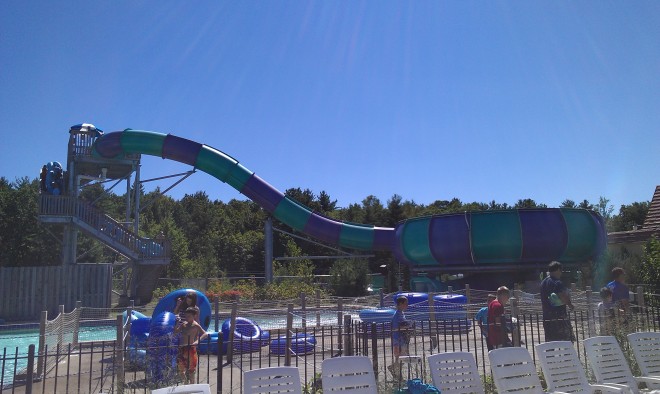 Flex provided us with this great shot of the Mega Wedgie and the reconfigured in 2015 pool and waiting line.  Basically, they filled up the side portions of the pool and made it a rectangular shape.  The waiting line and tube storage were also moved closer to the slide tower and this was to allow additional patio and chair space for the new Buccaneer Beach water park makeover.

In this new picture, you can see where the park expanded the seating area in relation to the Mega Wedgie.  The tube storage area was also moved to the other side.

Over at Kentucky Kingdom, when the park reopened in 2014, Mega Wedgie was so popular a CannonBOWL 40 was selected to be installed on a brand new custom complex.  It is known as the Waikiki Wipeout and compliments the two other slides in its complex very well.

In this picture shot by Flex at Kentucky Kingdom, the Mega Wedgie is in the middle. 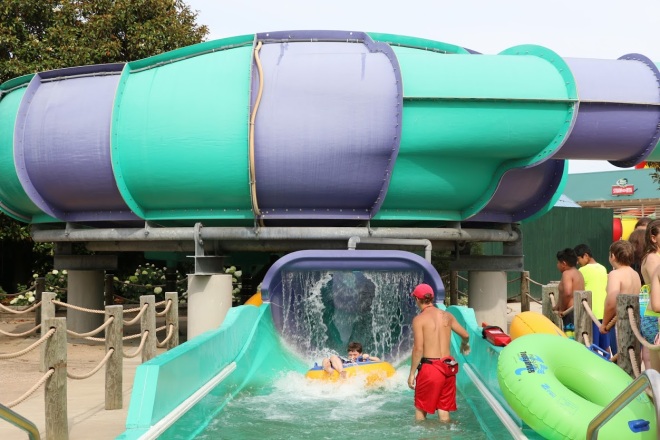 Kentucky Kingdom provided us with this great shot of the ProSPLASH equipped ending of Mega Wedgie.

Kentucky Kingdom provided us with this great shot of the Wikiwiki Wai Slide Complex. Waikiki Wipeout (CannonBOWL 40) is in the middle. https://www.kentuckykingdom.com/ 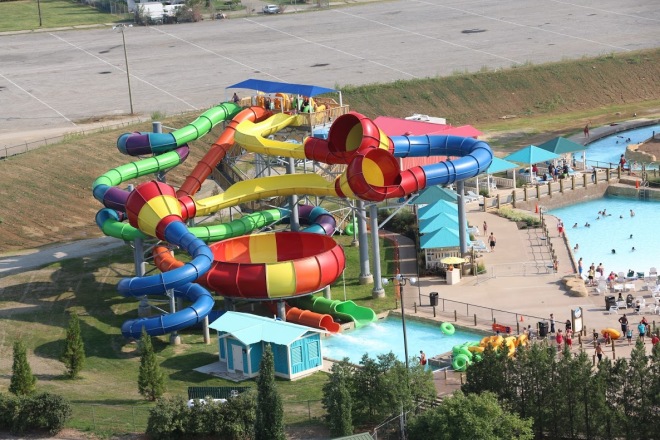 In 2012, Adventure Cove opened its doors as part of the Marine Life Park and was Asia’s first integration of a marine park with a water park.  Given the fact that it is located at Resorts World Sentosa on a busy Sentosa Island (Singapore), Proslide had quite a challenge maximizing the space and fit as many slides without it looking like a generic water park.  The end result is breathtaking as the slide colors were selected to seamlessly blend among the lush vegetation.  Also, to minimize visual intrusions, no giant bare steel towers were constructed and all slides had to be lower to the ground.

Now, Proslide selected the CannonBOWL 30 as the ideal candidate and it fits perfectly, sharing the same tower as a Proslide Tornado 24.  A unique feature is that both the Spiral Washout (Tornado 24) and Whirlpool Washout (CannonBOWL 30) use the same two person rafts, which make the Spiral Washout the only Tornado 24 to run non CloverLEAF or WhirlyWHEEL ride vehicles.  The current vehicles are the Proslide TopsyRIVER Double which has more of a rectangular shape than the typical Figure 8 double tubes.

Resorts World Sentosa provided us with this great picture of the Whirlpool Washout. The TopsyRIVER Double provides a stable and comfortable vehicle for riders in this attraction.  http://www.rwsentosa.com/Homepage/Attractions/AdventureCoveWaterpark

You can see the lush and rich environment the park has grown into.  The Bowl section of Whirlpool Washout barely peeks through the trees and scenery.

The park created imaginative and eye catching signs for its slides.

The same general theory applied in 2013 at Quassy Amusement Park (Middlebury, CT) when they doubled the size of their Saturation Station water park into Splash Away Bay.  The park has a strict 35 feet height restriction and they wanted to add thrilling attractions: what to do then?  Proslide designed a custom complex with the BulletBowl (CannonBOWL 30) and two FreeFALL body slide attractions.  Doubling the FreeFALL was a smart move as it fixed the usual capacity issue those popular slides have and the CannonBowl can use double tubes.  Plus, going with the BulletBowl kept it family friendly whereas the ProBOWL is only restricted to good swimmers and many swimmers are intimidated by the freefall at the end.

Ron Gustafson from Quassy provided us with this great overview of Splash Away Bay. http://www.quassy.com/

In this other great shot from Ron Gustafson/Quassy, you can see the incredible action the BulletBowl provides. http://www.quassy.com/

The end result was beyond expectations as it helps fill the park on hot summer days and the CannonBowl enclosed flume also provides a great head chopper visual for the two FreeFALL Extreme Bodyslides. 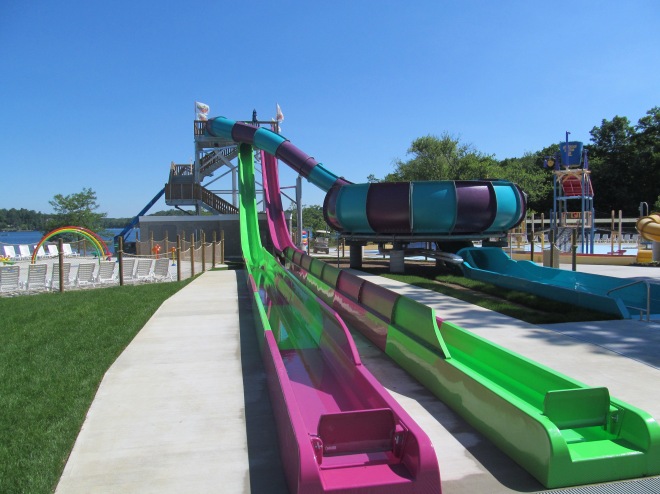 In this shot, you can see how close the the FreeFALL come to the CannonBowl. 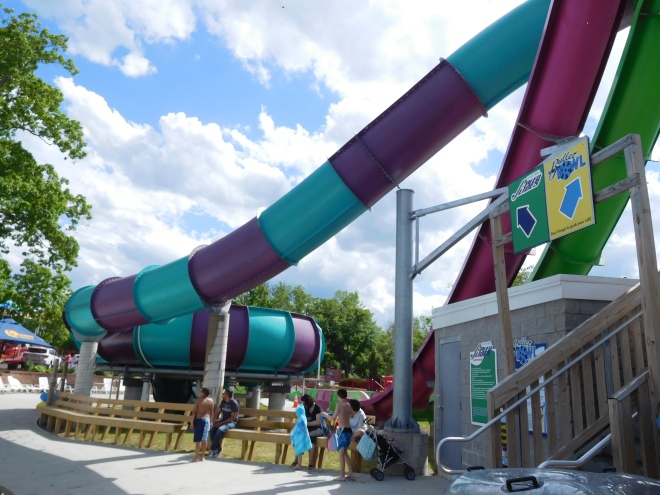 In this recent picture, you can see how close the Bullet Bowl flume goes to the two Freefalls.  This complex was built where the park’s previous steel roller coaster was located.

The Bullet Bowl and ProSplash lanes for the two FreeFall slides.  Thank you to Quassy for hosting Park Vault when we shot the previous two pictures.

When Six Flags Over Georgia opened Hurricane Harbor in 2014, a 3 slide Custom Complex was selected as one of the attraction.  As part of the custom complex, a CannonBOWL 30 was featured and you can see it in the bottom left of this picture provided by Six Flags Over Georgia.  https://www.sixflags.com/overgeorgia 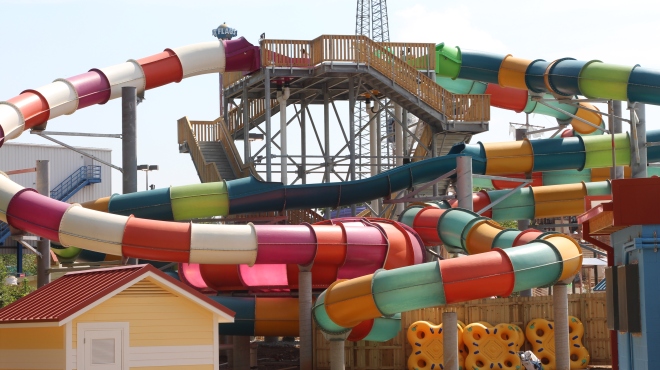 In this other picture from Six Flags Over Georgia, you can see the approach into the CannonBOWL30 and how close the two other PIPELINE Tube slides get to it.  https://www.sixflags.com/overgeorgia 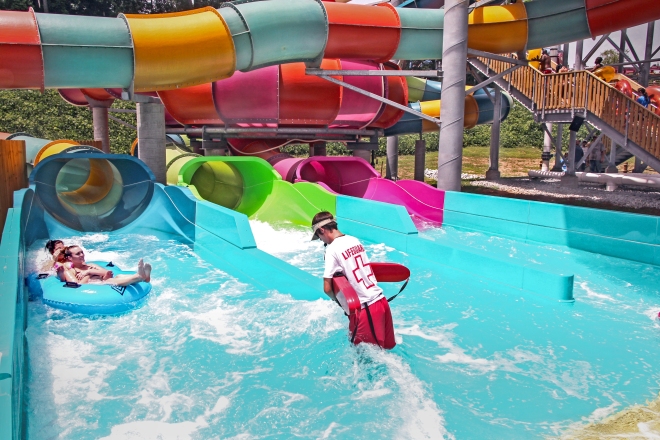 Six Flags Over Georgia provided us with this great shot of the ProSPLASH exit channel that is shared for the three slides. https://www.sixflags.com/overgeorgia

The CannonBOWL 30 popularity exploded in Asia where nearly as many was installed as the more popular CannonBOWL 40. Over in North America, Aquatica by Seaworld in San Antonio, TX installed a dueling pair around 2010.